A unique actress, a bright person

Tzeni Karezi has been one of the most popular actresses in Greece, a talented, renowned artist with a revolutionary soul and love for the theater, Greece and life. With a lively spirit and acting range, both for comedy and drama, she entered the homes and hearts of Greek spectators who do not cease to remember her with nostalgia and emotion regardless of the time that has passed since her passing away.

Eugenia Karpouzi (her real name) was born in Athens on January 12, 1934, and lived her childhood in various cities, following her parents’ transfers as educators. Her father, Konstantinos Karpouzis, was a mathematician and her mother, Theoni, a teacher.

During the Occupation, young Eugenia was about 10 years old and the Nazi atrocities marked her throughout her later life. Even more because, in September 43, two of her classmates were executed at the Aristotelous Square of Thessaloniki by the Nazis. 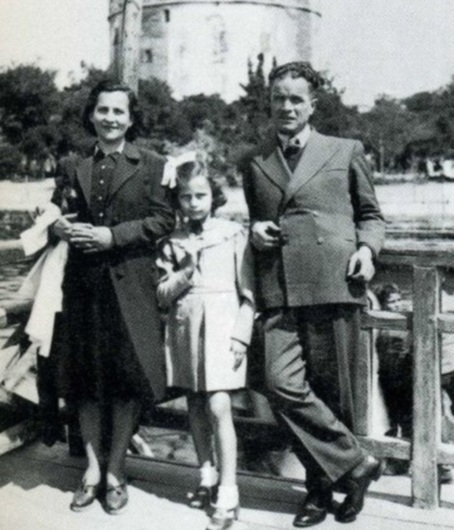 Kostas Karpouzis, was a personal friend of John Metaxas, a deeply conservative man. However, an insignificant event was the reason for losing the favor of his close friend. He insulted Metaxas, which he heard about and his “punishment” began; the continuous transfers, first to Syros and then to Thessalonica, where he put his daughter in the boarding school of the French School of Kalogria. In a lesson, a nun called Eugenia by the name “Tzeni”, and although the strict Kostas Karpouzis was not excited about the idea of his daughter changing her name, that name followed her until the end of her life. Later, Tzeni Karezi continued in the corresponding Greek-French Shen Zhelev in Athens.

At home, when her father was absent, laughter and joy prevailed, and when he returned the atmosphere changed. “I was young then to say: “Mother, do not load me like that. I do not want this load. Go away. You have your job, you have your youth, you have your beauty. Go away. Stop this terrible life. Go away. Do not let me see all this (…). Whatever happens will be better. Go away, mother. My mother”. She never left. I stayed too,” she wrote in her book “Tetradia zois” (Life notebooks).

Her love for the theater began to manifest since her school years and was expressed by her participation in the school’s performances. The year of her graduation from the Greek-French School in 1951, she took part in the performance of Sophocles’ Antigone, which she performed by the graduates at the REX Theater, playing the homonymous role. 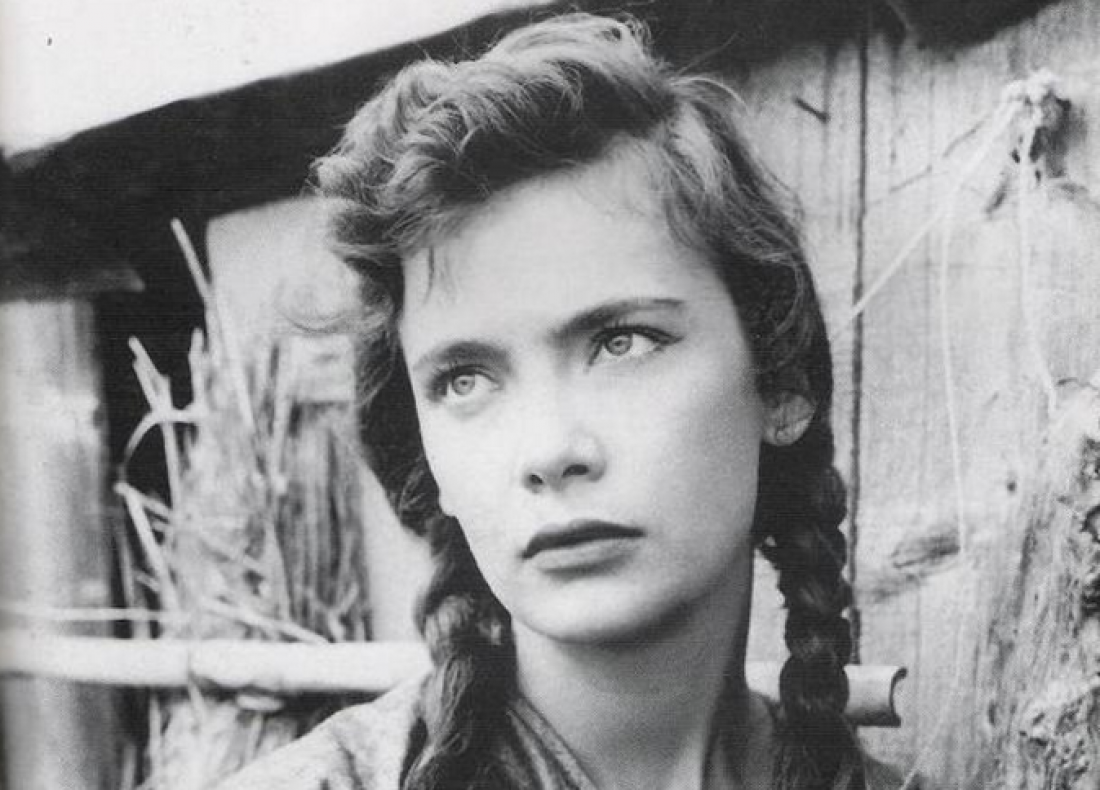 When Tzeni decided to become an actor, it was when the final rupture with her father happened. “Kostas Karpouzis did not want his daughter to have anything to do with the theater. He saw something very cheap in it,” her son confessed. Young Tzeni in an attempt to persuade him had a nine-day hunger strike.

After getting into the National Theatre of Greece, she managed to keep the secret for a year, but when her father discovered it in which he “replied” with a strong slap. “The separation of daughter-father happened when Tzeni was in the first year of the School. When he found out, he slapped her. She did not accept such things. She rebelled. She grabbed his hand and said, “That’s not going to happen again.” And she took her mother and they left the house,” Kostas Kazakos had revealed. Since then, they met only a few times, with him watching her performances but always from the rear seats. 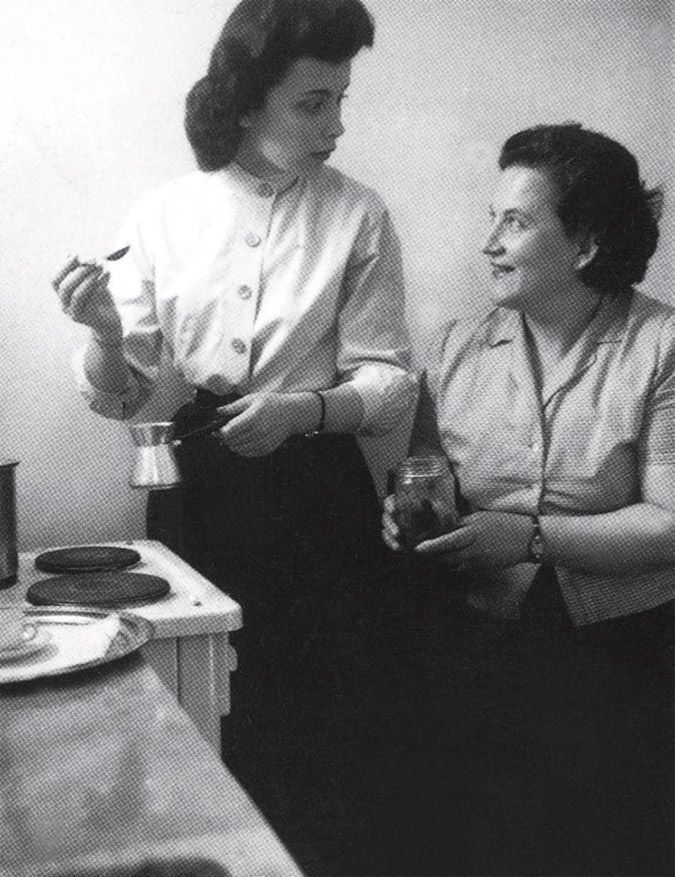 At the National Theatre of Greece, she studied next to Angelos Terzakis, Dimitris Pontiris, who gave her the artistic name “Karezi”, Katerina and Giorgos Pappas, who was also her first great love. She graduated in 1954 and immediately became a protagonist.

Her first role on the stage was next to Melina Mercouri and Vassilis Diamantopoulos, in the work of Andre Roussen, “Helen of Troy”, which was staged in October 1954 at the Kotopouli Theater. The role of Adela followed in Lorca’s work, “The House of Bernarda Alba”, starring Katina Paxinou and directed by Alexis Minotis. 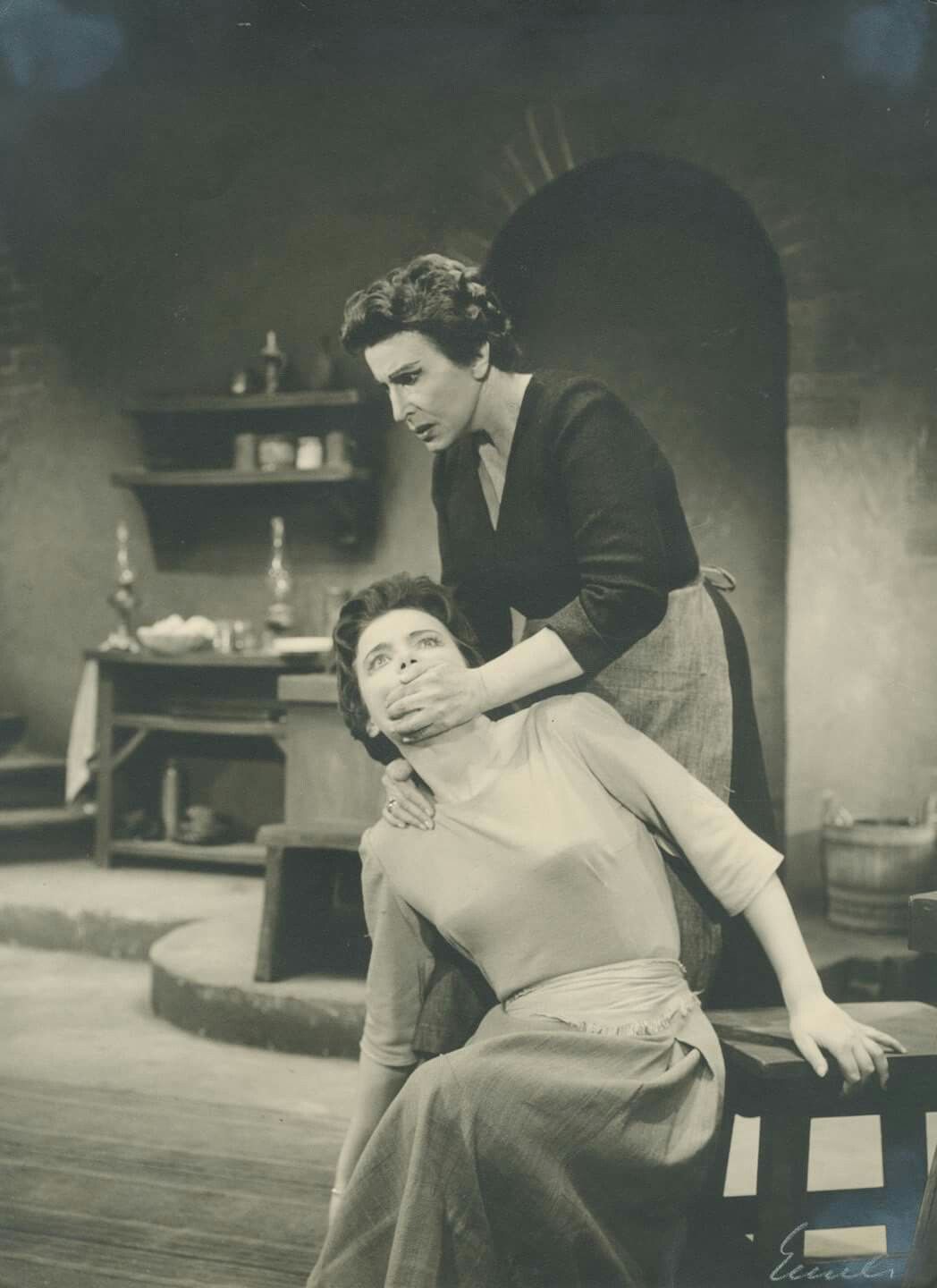 In 1955, she made her film debut in Alekos Sakellarios’s film “Laterna, ftoheia kai filotimo” only for more than thirty films to follow.

After 1960, she created her own personal troupe and collaborated with great comedians such as Lambros Konstantaras, Dinos Iliopoulos, Mimis Fotopoulos and Dionysis Papagiannopoulos. From 1968, until her death, she played with Kostas Kazakos, works by Campanelli, Almi, Ipsen, Chekhov, Anagnostakis, and in 1985 she first performed the ancient drama “Medea”, directed by Minoas Bobanakis, a show that was very successful in Epidaurus and Herodion. Two years later, she starred in Sophocles’ Electra, directed by Robert Sturua, who was played in Epidaurus and Lycabettus.

Her great success was undoubtedly the modest work of Iakovos Kambanellis, “Our Big Circus”, in 1973, and was one of the focal points of spiritual resistance during the dictatorship. She and her husband, Kostas Kazakos, were arrested and harassed by the authorities of the junta, with Kazakos, for days not knowing which dungeon they had her in. “Yes, I can get in jail again. If necessary, I can go back,” she said after her release. 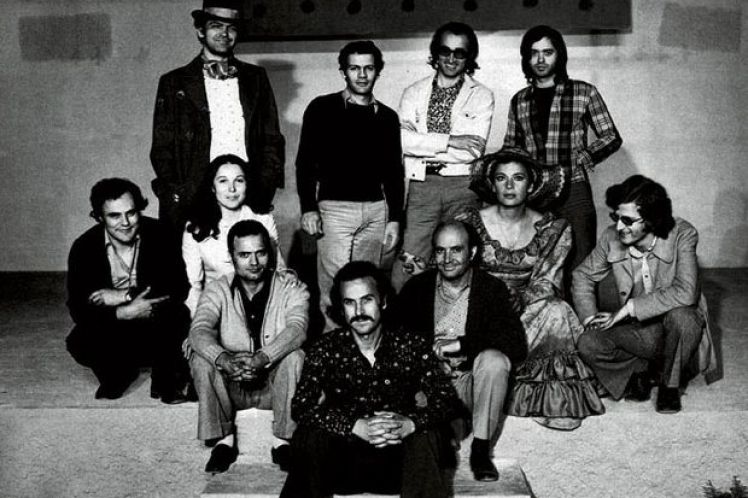 Two months after the regime-change, on 24 September 1974, a huge event took place in Cyprus, on the Panathinaikos stadium, which she attended among Theodorakis, Loizos, Savopoulos, Dalaras, Xilouris, Melina Mercouri, Nikos Kourkoulos and many other artists. 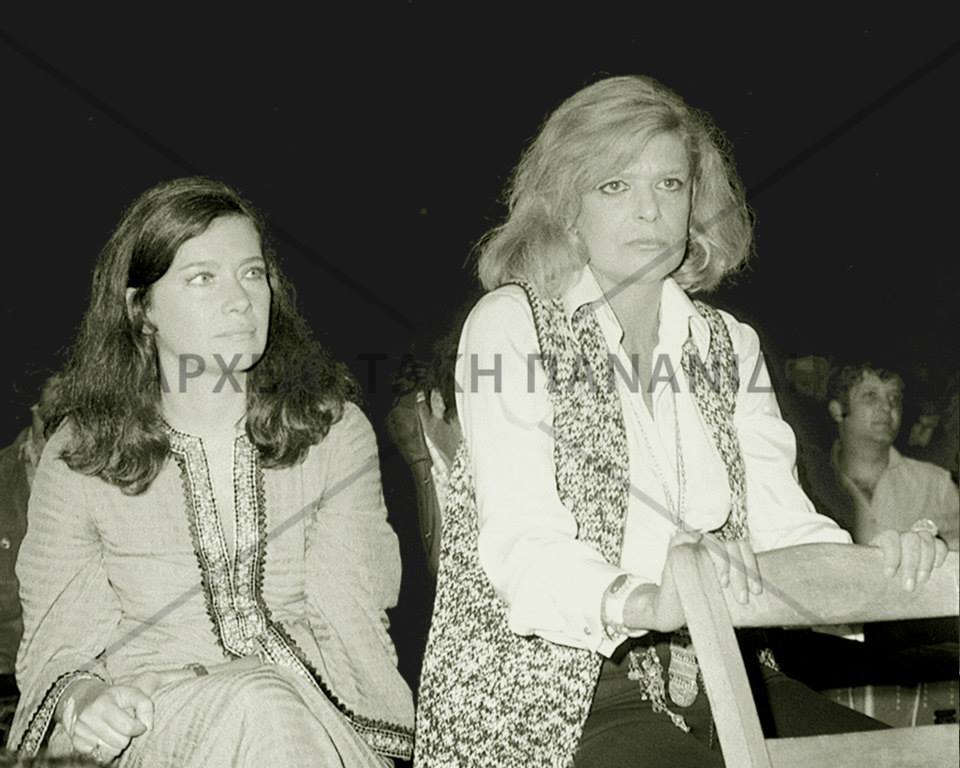 In her personal life, she made two weddings. The first one was with journalist Zachos Hadjifotiou, in 1962, in Filothei, where the presence of her fans was so great that the guests did not even reach the temple. At the reception which followed, Grigoris Bithikotsis played music, in front of whom the wedding proposal had been made a few months ago.

In 1963, she starred in the film “The Red Lanterns”, which brought out her dramatic talent and appeared in Cannes, impressing audience and critics. Tzeni Karezi had suggestions for an international career, but she did not want to give half her paycheck on agents. With “Lola”, which was filmed the following year, her acting skill in dramatic roles was confirmed.

Her second marriage was with actor Kostas Kazakos in 1968, with whom she was married until the end of her life. In 1969, the couple had a son, Konstantinos Kazakos, and that was the year when her father visited her again shortly after the birth of her son. Two years later, Kostas Karpouzis was killed in a car crash. 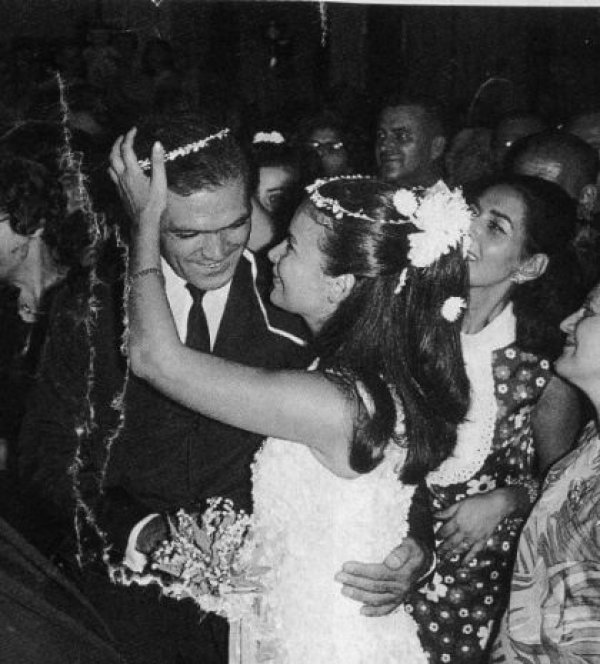 “The terrible incident with her father happened later. There was so much love between them. We were told that he had been hit by a truck and was in the hospital in a coma. He never came around. We ran into the night and found him in a ranch. Tzeni began to shout to bring doctors from France, but it was a matter of hours as doctors told her. The next night, after the show, we entered the room where he was and in the semi-darkness, still with closed eyes, Tzeni bent over him and I heard him say “My little Eugene”. I was stunned, Tzeni burst in tears. He did not speak again,” Kostas Kazakos had revealed in an interview.

It is worth mentioning her friendships with Aliki Vougiouklaki, who had been together since the Nation Theatre of Greece, and with the couple Katina Paxinou-Alexis Minotis, a friendship that was born with the performance “The House of Bernarda Alba” and was later sealed after baptizing her son. Very good friends of hers were also Mary Chronopoulou and Maro Kontou. 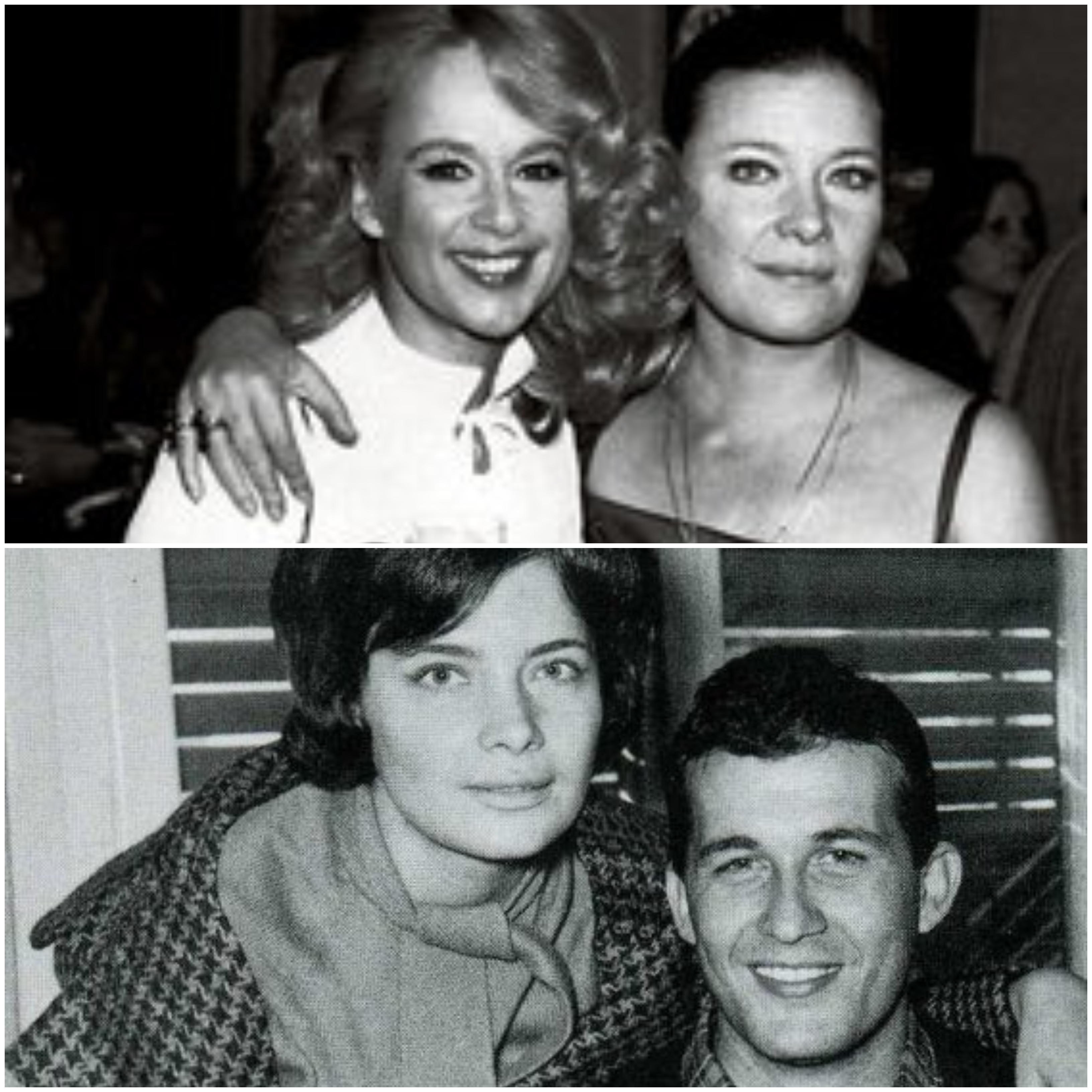 Karezi was diagnosed with cancer during the 1988-89 theatrical year when she starred in Chekhov’s “Cushy” show with Kostas Kazakos. The couple’s performances were interrupted and the actor traveled abroad for exams. In May 1992, two months before her death, Tzeni Karezi said in a letter to the press, “I want to live with my people, I want to do my beloved job. I want to offer. To love and be loved. These cannot be lost. They should not be lost. I do not want them to be lost. And I will always hope. “

Her latest play was “Diamonds and Blues” by Loula Anagnostaki (1990). “The theater for me means my whole life. I can not imagine my life without the theater, away from the theater. That no! There I would die! “, said Tzeni Karezi, in a televised interview. 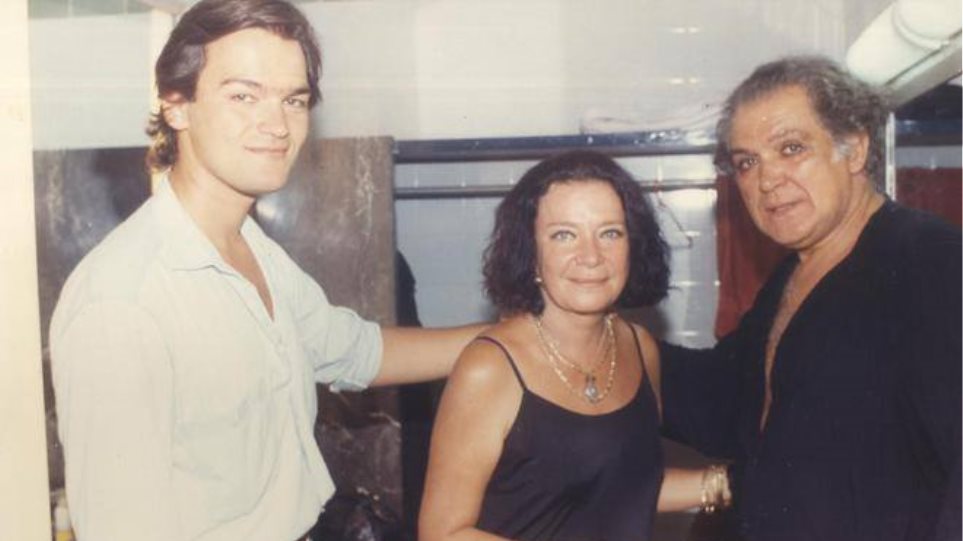 The great actor died on July 27, 1992. In her memory, the “Tzeni Karezi Foundation” was founded in the same year, aiming at the palliative care of patients suffering from cancer and chronic end-stage diseases and their alleviation of pain. 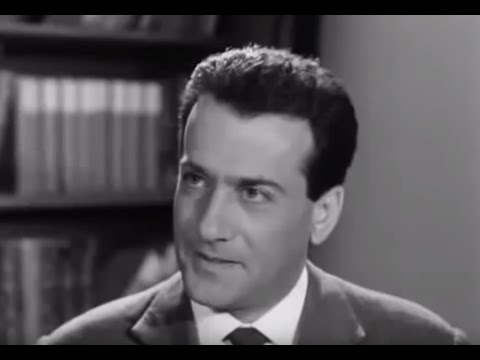