Born in July 20, 1934 in Maroussi, Attica. Her father, John, was a lawyer and region leader of Arcadia. Pneumonia that she  suffered few days after her birth, urged her parents to baptize her immediately. The name: Aliki – Stamatina.

Her difficult childhood was overshadowed by the murder of her father during the German occupation. Her mother, Emilia Koumoundourou, was then asked to grow up Aliki and her two siblings, Antonis and Takis, alone. From early ages, Aliki’s idols were Mary Pickford and Greta Garbo.

In 1952 she began her studies at the Drama School of the National Theater, having previously won the entrance examination, in which she participated without informing her family. In the second year of her studies at the National Theater she made her debut on the stage. Between 1953 and 1954, Aliki Vougiouklaki participates in Moliere’s ‘’The Imaginary Invalid’’, which was performed at the Municipal Theater of Pireaus, having the role of Louiza, the little daughter of Argan – the “imaginary patient”. 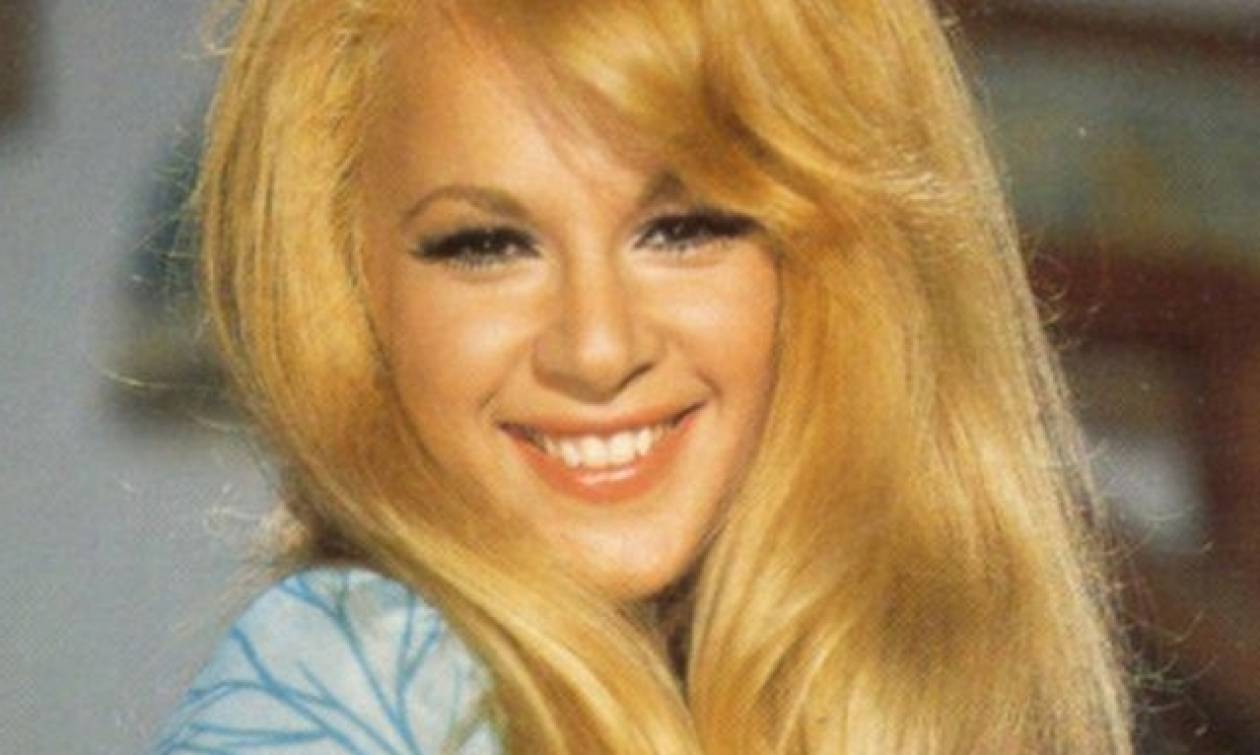 In the summer of 1954, σhe was invited by one of the most prominent Greek actors and theatrical directors, Nikos Chatziskos, to replace Anna Synodinou in the “Romeo and Juliet” project and to perform the “Juliet” in the well-known Shakespeare’s tragedy.

In the same year, her first appearance in cinema followed. It was the film “Pontikaki”. Nikos Tsiforos signed the script, along with Giorgos Asimakopoulos. Among the protagonists were Mimis Fotopoulos, Dionysis Papagiannopoulos and Nikos Rizos. Although she had a key role, her name was missing from the original titles of the film.

On August 20 1955, the magazine “Woman” released a cover photo with a brunette young girl without mentioning her name. It was Aliki Vougiouklaki on her first cover, one of the countless covers that will follow. 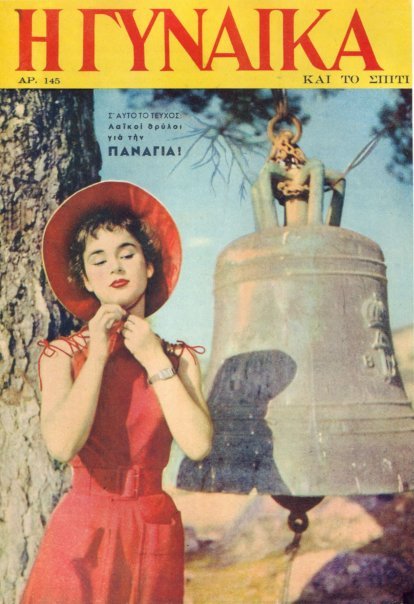 Due to hers extraordinary popularity, she was named “National Star” of Greece  by the great journalist Eleni Vlachos, through her column in newspaper “Kathimerini”, “… our national star Alice Vougiouklaki, as the French have established Brigitte Bardot and the Americans their national Marilyn Monroe …“, Eleni Vlachos wrote.

In 1958 he starred in “Mousitsa” and triumphantly singing “Rico Rico Rico”, followed by his first collaboration with the legendary “Finos Film”. A collaboration that was meant to change the history of Greek cinema. Together, they made some of the greatest success stories of Greek cinema, among them the films: Astero, To ksilo vgike apo ton paradeiso, Madalena, Aliki sto Naftiko etc.

In “Astero” Alice Vougiouklaki met for the first time in a cinema scene Dimitris Papamichail (there were students together at the National Theater School), the film comes in the first place among 45 other films, named Film of the season and participate in the 9th Berlin Festival. 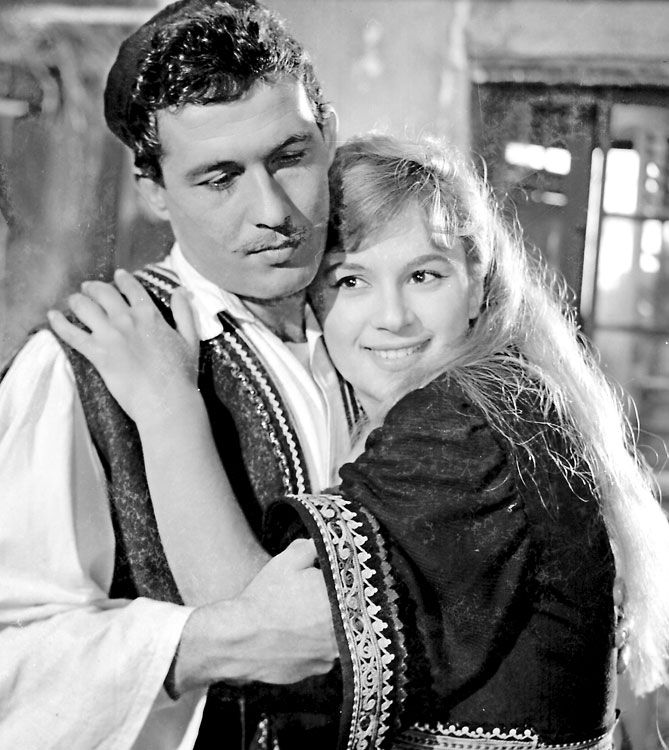 In November 1959, it is time to play the role of  “Liza Papastavrou” in “To ksilo vgike apo ton paradeiso”, directed  by Alekos Sakellarios. The film was awarded in 1960 at the Thessaloniki Film Festival, as one of the best works of the last five years. 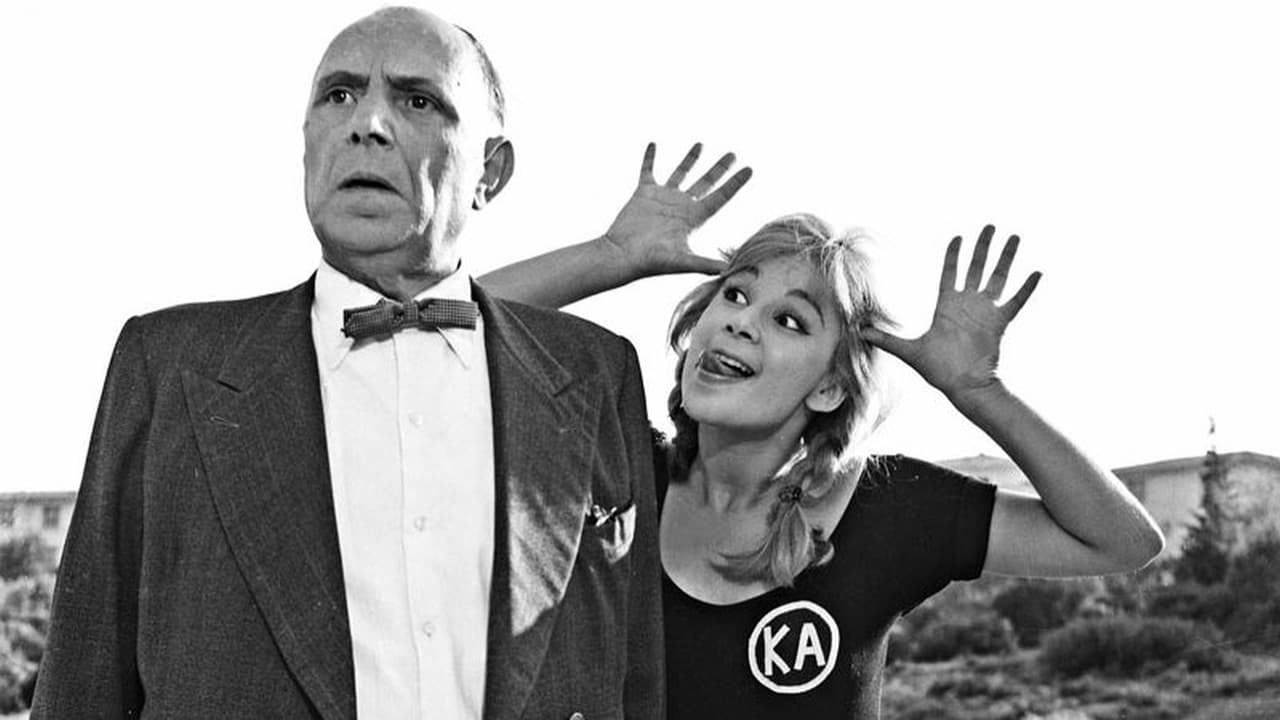 At the same time, at “To ksilo vgike apo ton paradeiso”, Aliki Vougiouklaki meets for the first time Manos Hadjidakis and the vinyl containing the songs of “Exo ena mistiko” and “To grizo gati” (composed by M. Hadjidakis ), it becomes the first golden record in the history of the domestic record label. 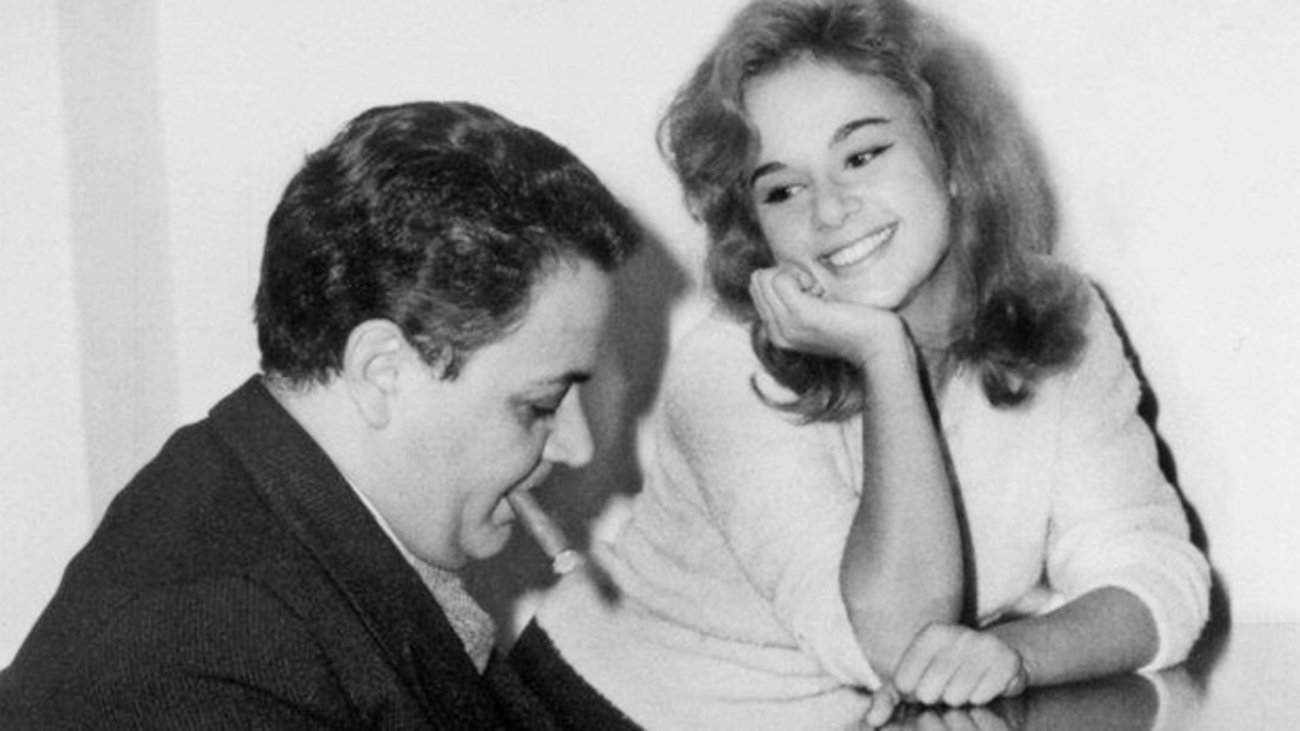 In 1960, he won the Best Actress prize at the 1st Thessaloniki Film Festival for her performance in “Madalena” movie, directed by Dinos Dimopoulos, while the same film represented Greece at the International Film Festival of Cannes.

In early ’61, Finos Films first color film, “Aliki sto naftiko” was first screened in the cinema, and the film cost 2.5 million drachmas, an astronomical amount for that period of time. Manos Hadjidakis writes the music of the work and among the songs are “Trava Mpros”, “O Glaros” and “O Gaidarakos”. 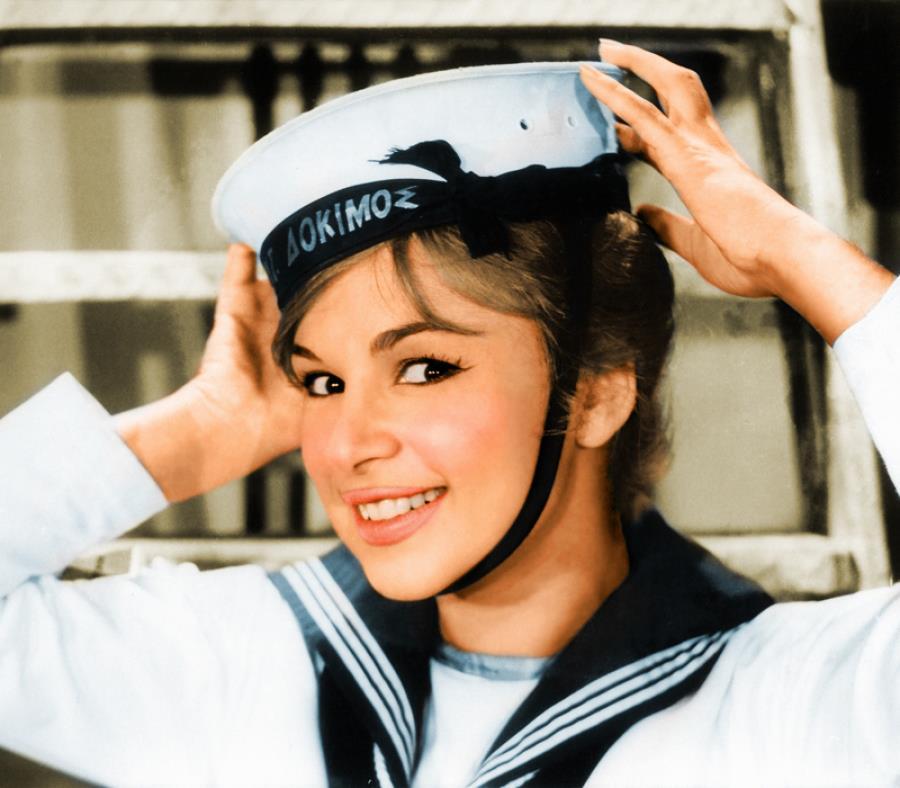 Her film roles such as the cute schoolgirl or the rich young girl who revolves against her rich father, sometimes the poor and insignificant girl who manages to ascend, achieve and be glorified, has, and continues to have, a great resonance to the public securing the actor’s rare popularity, while the film ”Ipoloxagos Natasha” was the greatest recounting success in the history of Greek cinema for three decades.

In 1961 Aliki Vougiouklaki set up her own theater team, bringing the works of Caesar and Cleopatra, Htipokardia sto Thranio etc.

And while the “phenomenon” Aliki Vougiouklaki continued to grow in size, Finos Film desire was to film an English-language film that would be the starting point for an international career.

In 1964, on the island of Ios, the film “Aliki” (Aliki My Love) was filmed, with co-stars of the British actress Wilfred Hyde and Jess Conrad. The direction was taken by Rudolph Mate, one of the representatives of the film noir in the 1940s. Despite the grand premiere in London and Athens, the film did not deliver the expectations. “Aliki My Love” has never been shown on Greek television as the film has been lost, or, as the rumors claim, because Aliki Vougiouklaki herself asked for its “disappearance”. 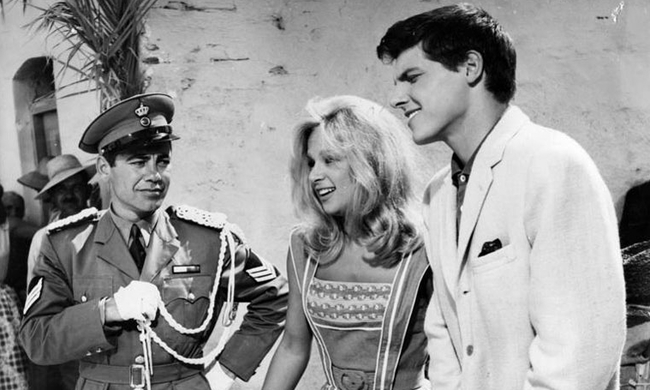 She then leaves  “Finos Films” company and goes to the film company “Damaskinos – Michaelides”. Theatrical “Htipokardia sto thranio” is transferred to cinema and becomes the “key” for the return of cinematic successes. She calls Dimitris Papamichail and asks to become her co-starter. Their names were also placed for the first time in titles next to each other. The film was shot at the same time in the Turkish language, titled “Siraladraki Heyencanlar”. 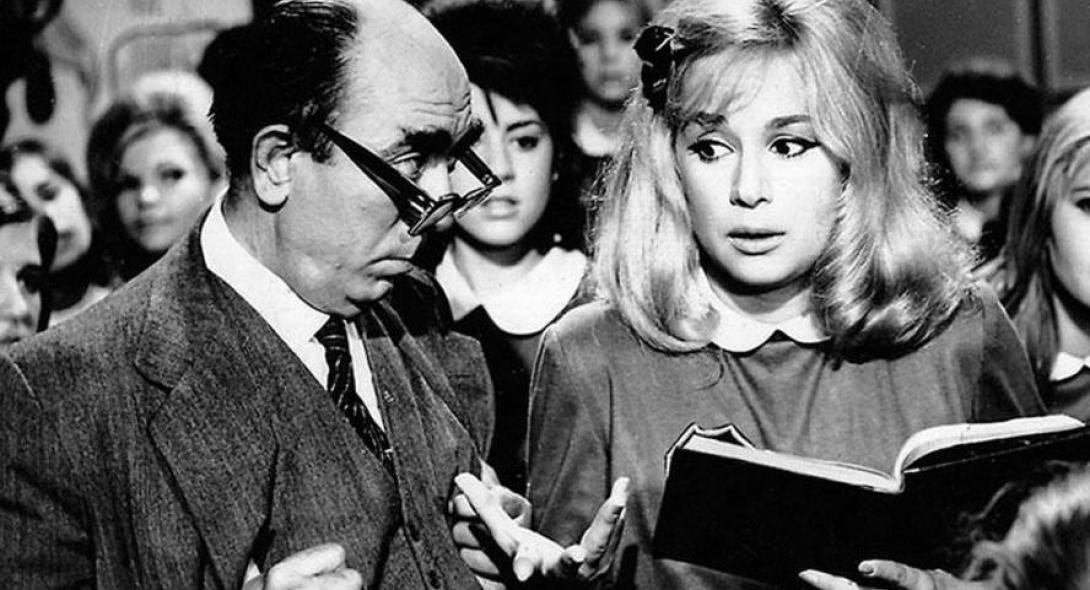 In 1965 she is in the Kentrikon theater along with Dimitris Papamichail, where they raise the “Colob” of Zan Anwig. In the rehearsals of the project, the two protagonists begin to fall in love and in the evening of the premiere the wedding proposal came.

After the filming of the film “Monterna Staxtopouta” by Alekos Sakellarios in Rome in 1964, Aliki Vougiouklaki and Dimitris Papamichail announce their upcoming marriage.

Their marriage took place on January 18, 1965, in Delphi and the church of Ag. Nicholas, with the aim of avoiding the world-wide crowd, which eventually proved impractical. The audience, like the glamorous guests, gave a thunderous presence. 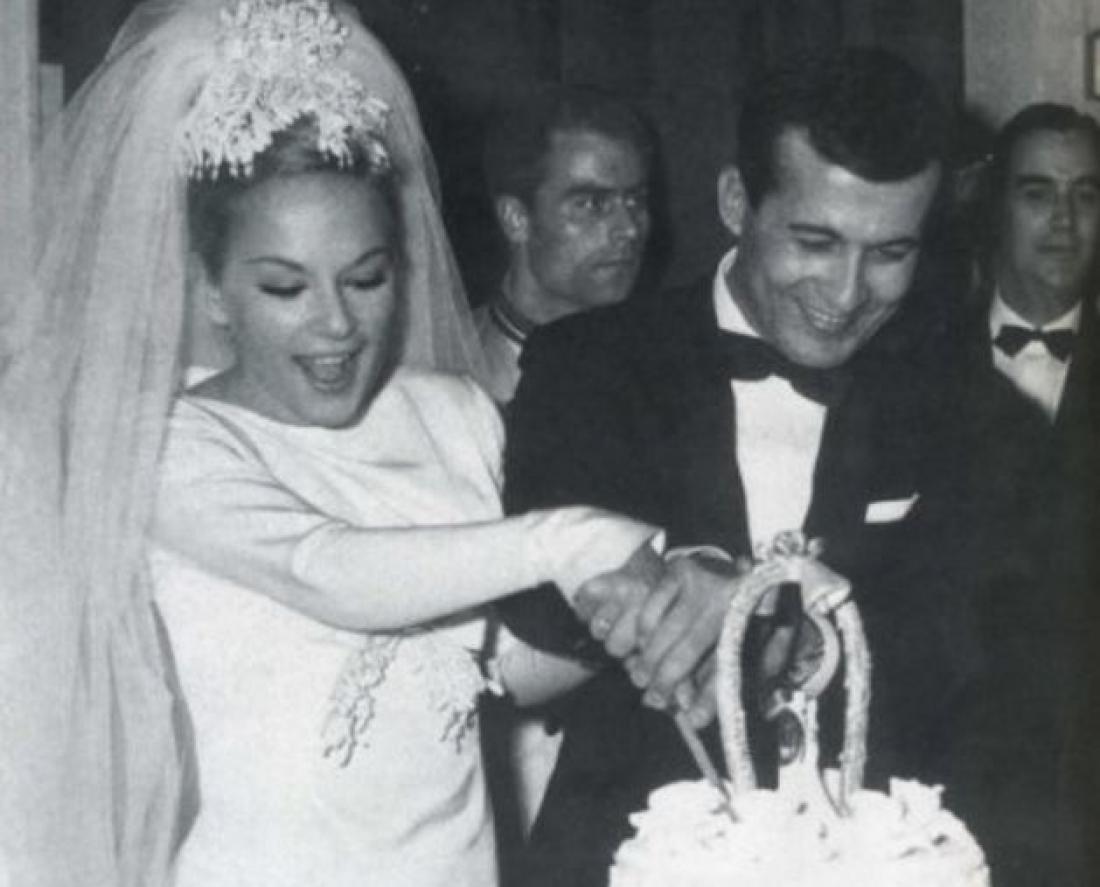 After the movie “Ah, ayti i ginaika mou” the couple Vougiouklaki – Papamichael “moves” to the company “Karagiannis – Karatzopoulos films”. Their collaboration was inaugurated with “To pio lampro asteri” (1967) and continued with “The Girl of the Luna Park” (1968) and “Our Love” (1968).

In 1968, the return of the prominent protagonist to the legendary film company Finos Film was a fact. Starting with “I Archontissa kai o alitis” (1968), they break the “barrage” of 700,000 tickets in the Attica theaters. 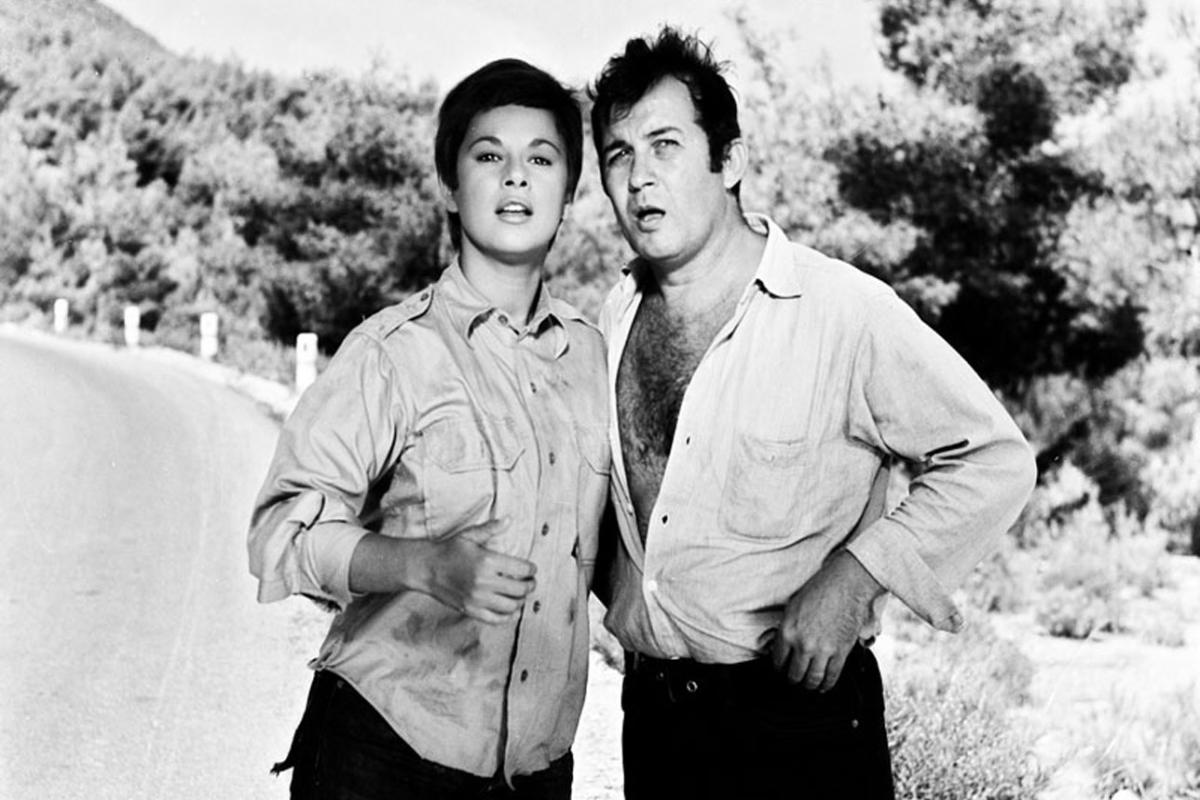 During the filming of “I daskala me ta xrisa mallia” in Pelion, Aliki is already pregnant to her son, Giannis Papamichail. On June 4, 1969, Aliki Vougiouklaki becomes mother and then she completed the film, the fifth most commercial film in the history of Greek cinema. 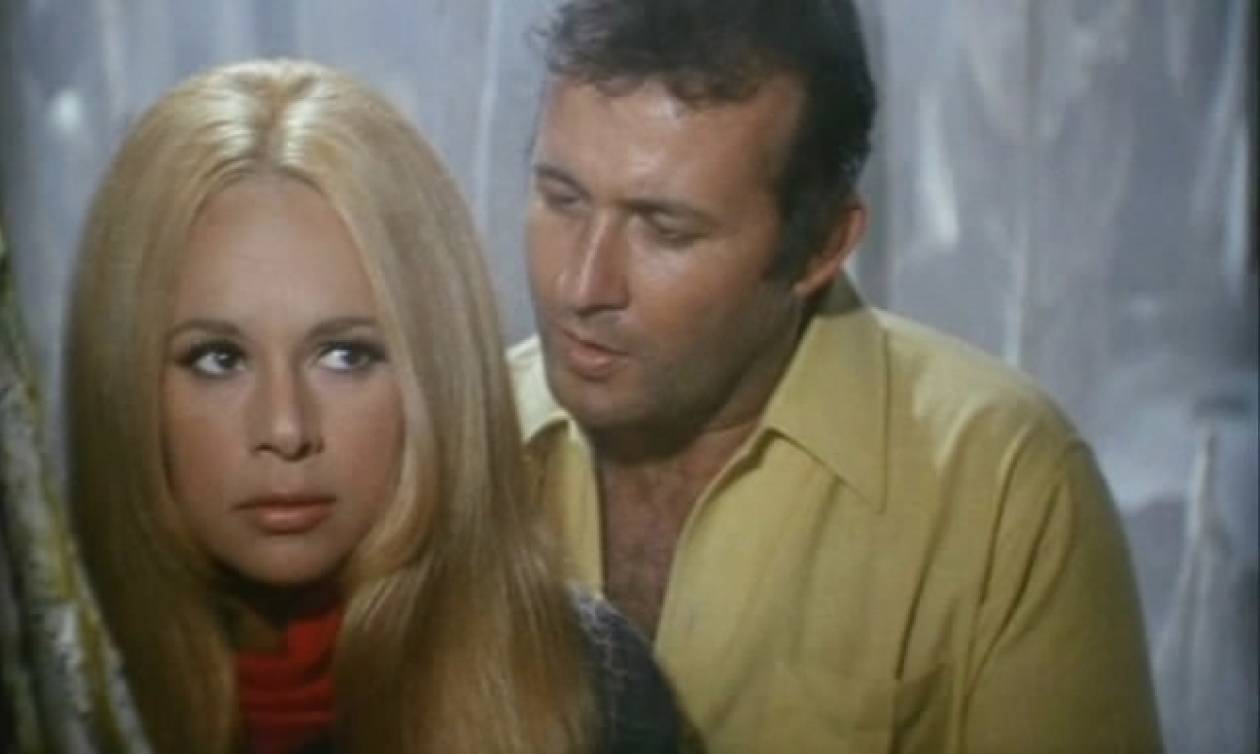 After “I Neraida kai to Palikari”, Aliki Vougiouklaki and Dimitris Papamichail play in the film “Lieutenant Natassa”, directed by Nikos Foskolos. It is one of the biggest productions of “Finos Film”, with filming in Greece, Cyprus and Germany. “Lieutenant Natassa” came first in box office and became the most commercial film in the history of Greek cinema. At the same time, it was the last cinematic presence of Vougiouklaki – Papamichail duo. 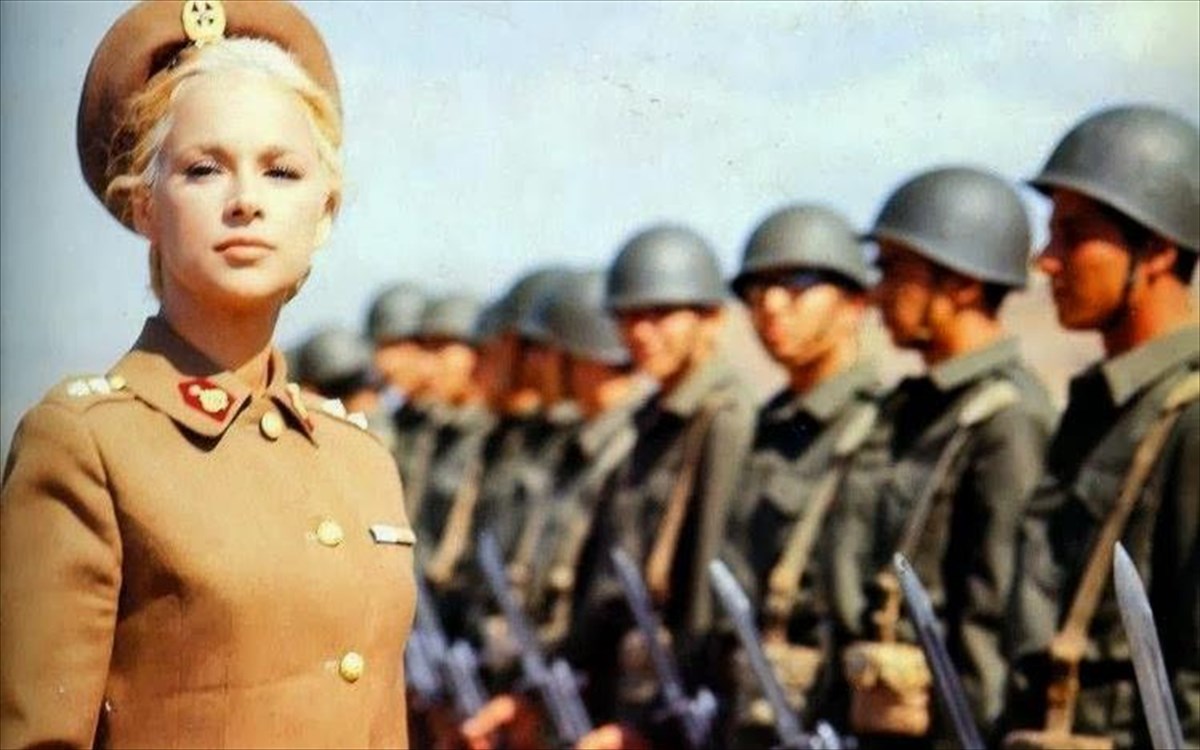 In 1973, she starred in “I Maria tis siopis” directed by Giannis Dalianidis and by playing the deaf “Maria Geralli”, she won the first place among 64 Greek productions. This particular film was the last collaboration of Alice Vougiouklaki and Finos Film.

The significant commercial downturn of Greek cinema has prompted Aliki to deal almost exclusively with the theater, bringing more than 53 theatrical performances.

On July 5, 1975, Vougiouklaki-Papamichail divorce due to … character misunderstanding. Several years after their divorce, Alice married secretly Cypriot, Giorgos Iliadis. The marriage was revealed by herself in an interview in 1993.

In 1979, she returned to Karagiannis Karatzopoulos film company and after an absence of 8 years in cinema, in 1980, she played in the film “Poniro thiliko, katergara gynaika”, with strong autobiographical details from her life. Her last appearance at the cinema was in 1981 with ‘’Kataskopos Nelly’’.

Her artistic paths with D. Papamichail were reunited in the ’84 -’85 period in the theaters with the project “Educating Rita” and starting from Athens, they began tours in Greece, Cyprus, Europe, USA and Canada. Their last joint appearance was at “Filumena Marturano” in ’86 -’87. In the middle of the ’86, Aliki Vougiouklakis presents Aristophanes’ Lysistrata to Epidaurus..

After her second divorce, and during her theatrical performance Evita, she meets Vlassis Bonatsos, and begins a relationship that lasted until the end of 1987. Her last partner in life was the actor Kostas Spyropoulos.

She did not have the best relationships with television. She appeared in a few roles such as: “Queen Amalia” (EIRT, 1975), “The Theater” (ERT, 1977), “Kabaret” (ERT, 1978) and she gave some interviews with high audience rates; in one of them to Nikos Chatzinikolaou, the audience rate approached 79%!

She also wrote children’s books, published by “Eleftheroudakis” publications and participated in recordings of theatrical works for the radio. In the role of a journalist at ANT1 97.5 radio station, she interviewed Manos Hadjidakis and Anna Synodinou. Also at the TV station ANT1 in Thessaloniki in 1992 she presented a program entitled “I Aliki in Thessaloniki of Wonders” where she hosted popular people such as Zoe Laskari and George Koudas. 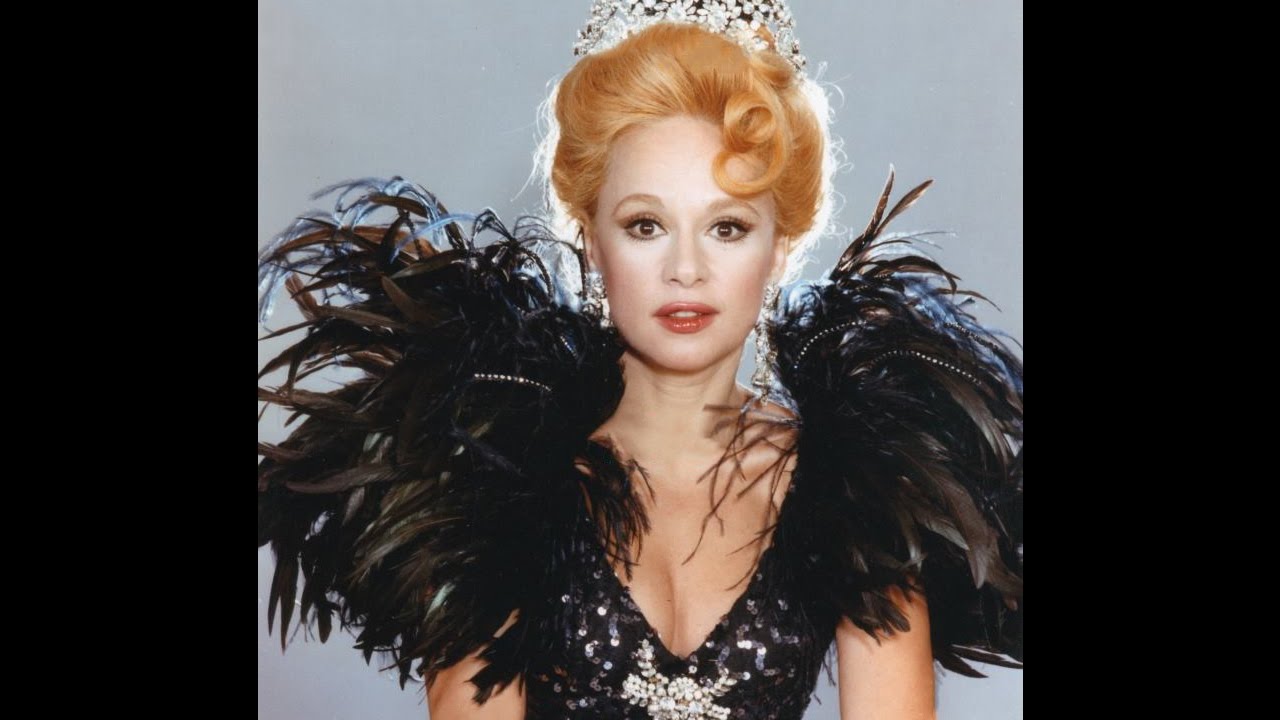 Her theatrical presence ended with the play “The Melody of Happiness”. The success of the performance was so great that it continued at the Alice theater for the second consecutive period.

Shortly afterwards, doctors diagnosed liver cancer. Her death, just three days after her birthday, on July 23, 1996, plunged Hellenism into mourning. Numerous artists and, above all, thousands of fans came to say goodbye to their own Aliki. 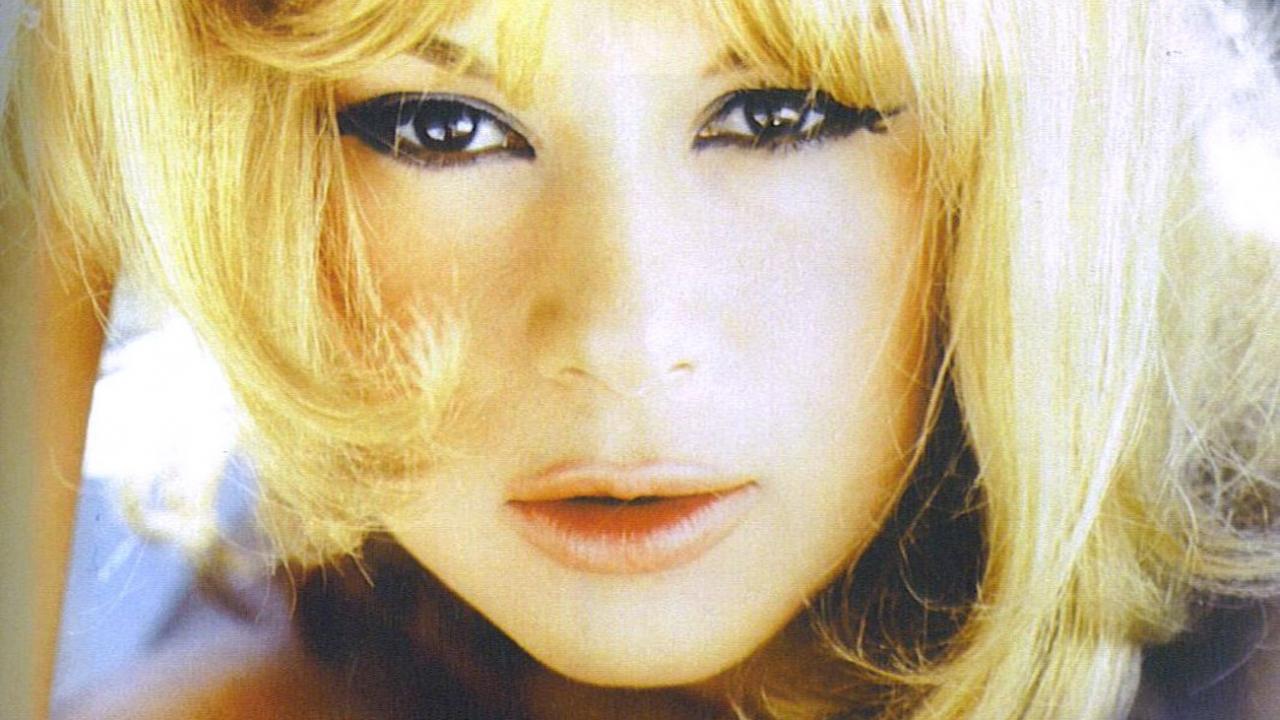 She was very much loved and praised, and there were countless events of admiration by people of all ages. Her films grew generations, even nowadays constantly showing up on television, younger admirers are added. Everyone called her with her first name; Aliki. A privilege that few people have in Greece.