The ambassador of Greek cuisine in Brussels awarded

Constantin Erinkoglou was honoured as Chevalier dans l’Ordre de Léopold II at the Egmont Palace in Belgium. He was honored with 5 more chefs for their contribution and crowned Knight of the Order of Leopold II.

For 20 years, his restaurant, «Notos», in Brussels, serves Greek food, recommending the Greek cuisine. Mr. Erinkoglou, has already been awarded with a number of prizes for example as the best ambassador of Greek cuisine in Belgium, Bib Gourmant the Guide Michelin and First Choice in Hot list of Conde Nast Traveller. He uses the most excuisite Greek and strictly selected restaurant ingredients (olive oil, capers, roe, trachana, beans, cheese, etc.) to accompany the best raw material of meat and fish.

“In my capacity as Foreign Minister, I actually had the pleasure, on behalf of King Philip, to hand the decoration of Chevalier in the Order of Leopold II for restaurateurs and chefs who were born abroad, became Belgium true ambassadors of the culinary traditions of their native country gentlemen Leopardi Spagnuolo, the restaurant Al Piccolo Mondo, Jean-Michel Hamon, the Toucan sur Mer, Luigi Ciciriello, the Truffe Noire, Giovanni Bruno, of Senzanome, Constantin Erinkoglou, Notos, and Tomoyasu Kamo Kamo. Gastronomy is one of the components of each culture and, by knowing better, we understand each other better and we approach. These figures restoration also contribute to the quality and diversity of Brussels gastronomy, of which they are part” said the Foreign Minister of Belgium.

As far as restaurant owners go, Constantin is unquestionably second to none. Well-trained businessman, the best ambassador of Greek cuisine worldwide is obsessed with culture and gastronomy and has obviously evolved over the years. Newly graduated sociologist, he lands up in Bruges in 1982 where he takes on a post-graduate degree in European Institutions. For ten years he works in the very heart of Brussels at the European Commission within the department of agriculture and rural development.

At the age of 36, he is in dire need of change and devotes himself to extensive research on Mediterranean cuisine and eating habits. He is quite taken by Hippocrates’ famous saying “Let food be thy medicine and medicine be thy food”. After attending a training course in biodynamic farming in Lyon, he is more than ever determined to bring the small honest producer and good food loving consumer together.

True to his Hellenic roots, he visits Mount Athos on several occasions and spends time with monks complying with their extremely austere lifestyle. He gets inspired by their frugality and spirituality. 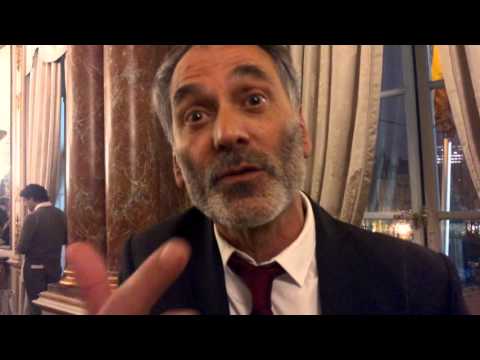