Astronomers announced on Monday that they had seen and heard a pair of dead stars collide, giving them their first glimpse of the violent process by which most of the gold and silver in the universe was created. The collision, known as a kilonova, rattled the galaxy in which it happened 130 million light-years from here in the southern constellation of Hydra, and sent fireworks across the universe. On Aug. 17, the event set off sensors in space and on Earth, as well as producing a loud chirp in antennas designed to study ripples in the cosmic fabric. Researchers have seen such ripples four times before, but this latest sighting differed from the rest: Astronomers not only heard the “chirp” of the ancient collision, they saw a flash of light.

Such explosions, astronomers have long suspected, produced many of the heavier elements in the universe, including precious metals like gold, silver and uranium. All the atoms in your wedding band, in the pharaoh’s treasures and the bombs that destroyed Hiroshima and still threaten us all, so the story goes, have been formed in cosmic gong shows that reverberated across the heavens.

Vicky Kalogera, the leading astrophysicist in the LIGO Scientific Collaboration (LSC), was one of six experts on a special panel at the National Science Foundation press conference announcing the news at the National Press Club in Washington, D.C.

“For the first time ever, we have proof. This is the first time we can hear the death spiral of two neutron stars, and also see the fireworks that came from their merger” said Vicky Kalogera.

She was one of thousands of astronomers that reported their results Monday in a globe-girdling set of news conferences and academic conferences. A blizzard of papers is being published, including one in The Physical Review Letters that has some 4,000 authors . “That paper almost killed the paperwriting team,” said Dr. Kalogera, one of 10 people who did the actual writing.

The historic discovery of colliding neutron stars — which happened the morning of Aug. 17 with the longest gravitational-wave signal detected to date and a short gamma ray burst signal — was made by thousands of scientists and engineers using the U.S.-based LIGO; the Europe-based Virgo gravitational wave detector; and some 70 ground- and space-based observatories, including NASA’s Hubble Space Telescope.

“Northwestern has played a singular role in this discovery, and that really is not an exaggeration,” Kalogera said.

The key to the discovery was the detection of gravitational waves, emanating like ripples in a pond vibrating the cosmic fabric, from the distant galaxy. It was a century ago that Albert Einstein predicted that space and time could shake like a bowl of jelly when massive things like black holes moved around. But such waves were finally confirmed only in 2016, when LIGO recorded the sound of two giant black holes colliding, causing a sensation that eventually led this month to a Nobel Prize. For the researchers, this is in some ways an even bigger bonanza than the original discovery. This is the first time they have discovered anything that regular astronomers could see and study. All of LIGO’s previous discoveries have involved colliding black holes, which are composed of empty tortured space-time — there is nothing for the eye or the telescope to see.

“Mergers of double neutron stars were predicted over many decades to drive such powerful explosions, but this multi-messenger discovery brings two key pieces of the puzzle together for the first time,” Kalogera said. “Our discovery confirms a lot of our theoretical predictions, including that double neutron stars give rise to gamma rays, optical, infrared, X-rays and radio waves. At the same time, there are hints in these observations that are providing new mysteries we still need to understand.”

But neutron stars are full of stuff, matter packed at the density of Mount Everest in a teaspoon. When neutron stars slam together, all kinds of things burst out: gamma rays, X-rays, radio waves. Something for everyone who has a window on the sky.

As the neutron stars detected on Aug. 17 spiraled toward each other, they emitted gravitational waves — ripples in space and time — that were detectable on Earth for about 100 seconds; when the stars collided, a flash of light in the form of gamma rays was emitted and seen on Earth about two seconds after the gravitational waves were observed. In the days and weeks following the smashup, other forms of light, or electromagnetic radiation — including X-ray, ultraviolet, optical, infrared and radio waves — were detected.

“This combination of light and gravitational waves is brand new and very exciting — we’ve never had this kind of observation before,” Kalogera said. “With the gravitational-wave signals from three detectors, two in the U.S. and one in Italy, we were able to tell our electromagnetic colleagues, working across the electromagnetic spectrum, where in the sky to point their telescopes to find the pair of neutron stars.”

Unlocks the secrets of the Universe

Breakthrough of the Year the LIGO’s gravitational-wave discovery 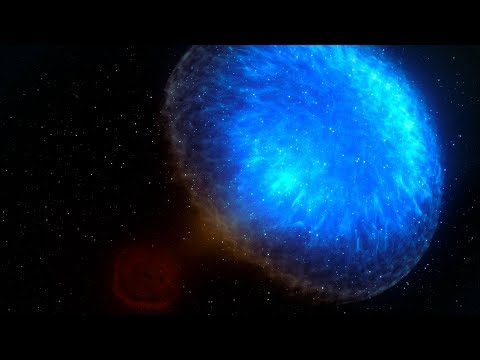