The top-level astrophysics and nuclear physics prize recognizes outstanding work in theory, experiment or observation in the areas of astrophysics, nuclear physics, nuclear astrophysics or closely related fields. Kalogera’s research focuses on the physics of compact astrophysical objects: white dwarfs, neutron stars and black holes. She is particularly interested in binary systems, where two stars orbit each other. She studies how such systems are born, how they evolve and how their lives end.

“It’s a humbling honor to receive this award,” said Kalogera, who met Bethe in 1998. “Many of the past recipients are giants in the field, people whose work I have admired and read about since I first started learning about astrophysics and nuclear physics. And there are no words to express Bethe’s own wide-ranging and fundamental impact on the field.”

Kalogera is the Erastus O. Haven Professor and associate chair of the department of physics and astronomy in the Weinberg College of Arts and Sciences. She also is director of the Center for Interdisciplinary Exploration and Research in Astrophysics (CIERA).

Kalogera is being recognized for “key contributions to the study of the electromagnetic and gravitational wave radiation from binary compact objects, including the now-verified prediction that neutron star mergers produce short gamma-ray bursts that will be found in all galaxy types.”

She will receive the prize at a ceremony during the April 2016 meeting of the APS.

In studying astrophysical objects in our own and other galaxies, Kalogera works on the theoretical understanding of current observations of an object’s electromagnetic emission and anticipated gravitational radiation — the theoretical “ripples” in the fabric of spacetime first predicted by Albert Einstein 100 years ago. She is helping develop optimal methods to detect these energetic gravitational waves and to astrophysically interpret the signals.

Kalogera has won numerous awards for her research, including a Simons Foundation Fellowship and the Maria Goeppert-Mayer Award from the American Physical Society, a National Science Foundation CAREER award, the David and Lucile Packard Foundation Fellowship in Science and Engineering and the Cottrell Scholar Award. In 2008, she was named one of Astronomy Magazine’s Top 10 Rising Stars of Astronomy.

The author of more than 200 publications, Kalogera is a member of the American Astronomical Society and the American Physical Society. The National Science Foundation and NASA support her research. 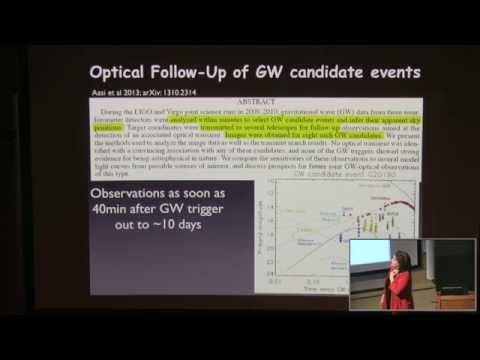