The legend of Greek basketball

Nikos Galis is a former Greek-American basketball player and one of the greatest European players. He is considered the most important figure in the history of the sport in Greece and the greatest Greek athlete of all time. In 2017, he became the first Greek basketball player to join the Hall of Fame, thus joining the “pantheon” of international basketball.

He was born on July 23, 1957, in New Jersey, USA, to immigrant parents from Rhodes and Istanbul, and grew up in the United States. In his student years, he wanted to be a boxer like his father, but his mother, unable to bear to face him in the post-match situation, actuate him to basketball. 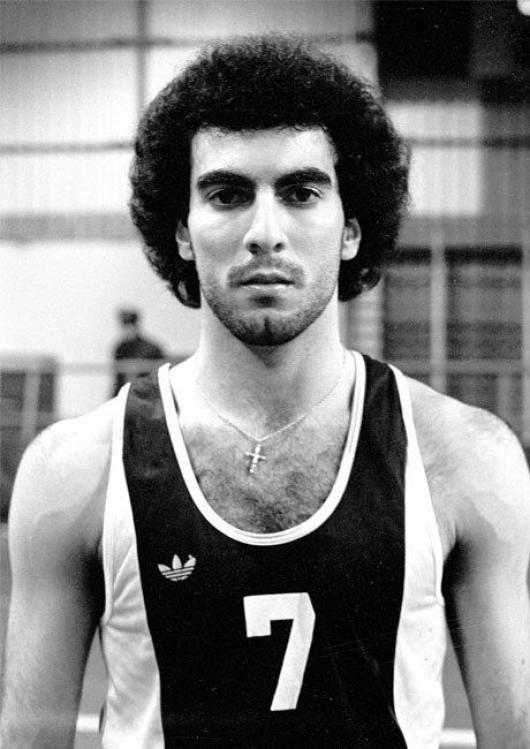 In 1975, he was admitted to the Catholic University of Sithon Hall, whose basketball team is famous for its distinctions. He played in the position of shooting guard and scored with a wide variety of moves, so he quickly stood out and became one of the best basketball players in the college championship. His favorite move was the mid-range jumper shot.

In the 1978-79 season, he became the third top scorer in the NCAA College Championship with 27.5 points average, behind the second (and later NBA legend), Larry Byrd. At the end of that season, he participated in the NBA draft and was selected by the Boston Celtics team, only in the third round of the process and in the 68th place overall. 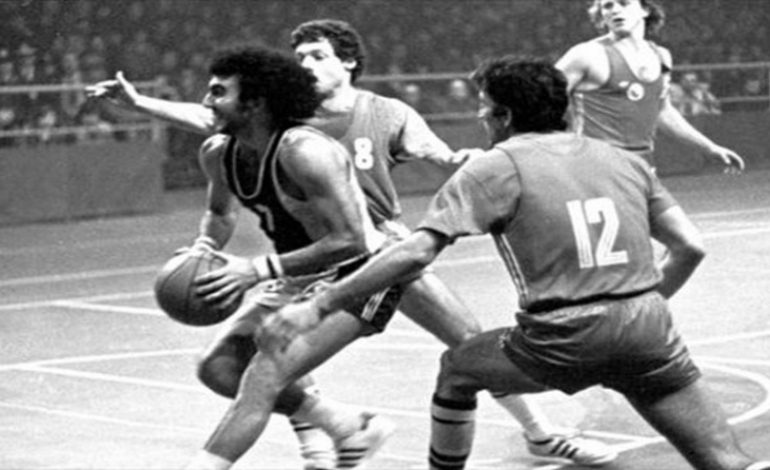 In the summer of 1979, the Greek teams of Panathinaikos and Olympiakos expressed their interest in acquiring him, but in the end, he preferred to join the Aris Thessaloniki team, which had become Greek champions.

In his first season in Greece, he became the 3rd top scorer in the Greek league, while the following year he became the top scorer in the Greek league and continued to win first place for 11 consecutive years in total. He finished the 1980-81 season with 44 points average, scoring the best performance in harvesting points on average in his career. 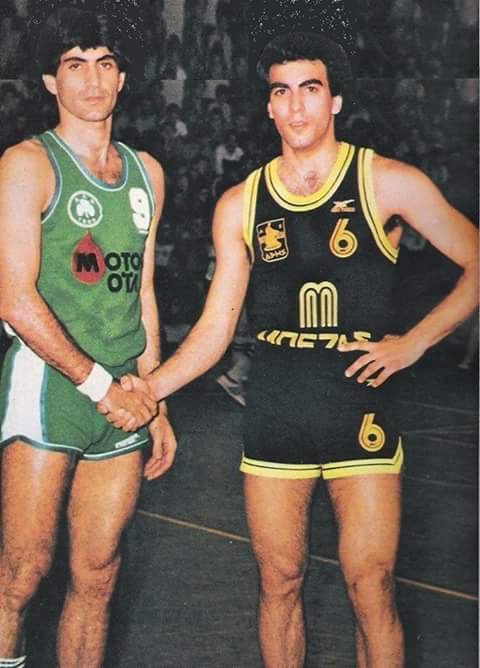 In the 1981-82 season, Galis played with Aris against Ionikos Nikaia, which ended 114-113 in favor of Aris and was one of the most memorable matches of the season. Nikos Galis scored 62 points for Aris and Panagiotis Giannakis 73 for Ionikos Nikaia.

During his first three years in Greece, he failed to achieve success at the collective level, as the Panathinaikos team maintained the first place. Nevertheless, in 1983, he became a Greek champion for the first time with the Aris team. 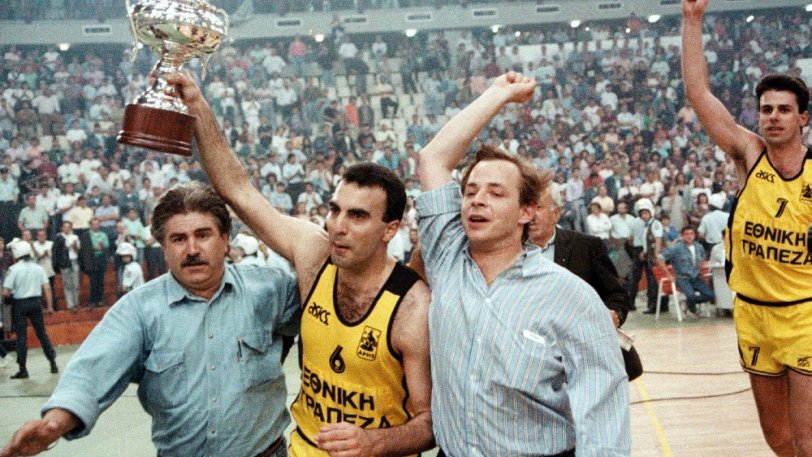 With the Greek national team, he participated in the 1983 Eurobasket and became the top scorer of the tournament. The following year, Aris was the favorite to win the championship, but lost to Panathinaikos in the play-off match in Corfu, while the loss of the cup in the final of the shaved heads was just as painful for the club.

In the summer of 1984, Aris made a transfer that would change the balance in Greek basketball and make the team the protagonist. With the acquisition of Panagiotis Giannakis, Nikos Galis could now lead Aris to greater distinctions. In 1985, Aris won the Greek Championship and Cup, which was also the club’s first double. 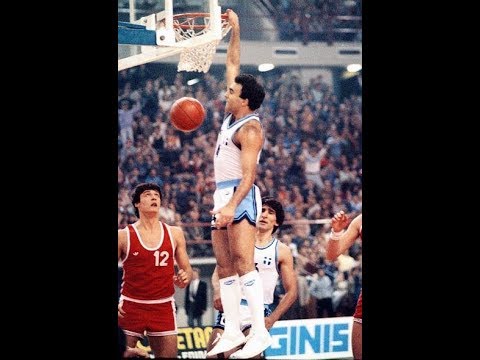 In 1987, he won his second double with Aris, making his debut for one of the most important years in Galis’ career and in the history of Greek basketball. After his successful season with Aris, he played in the 1987 Eurobasket with the Greek national team. Galis became the top scorer (with an average of 37 points) and MVP of the tournament and the National Team of Greece became European champion, beyond any prediction. 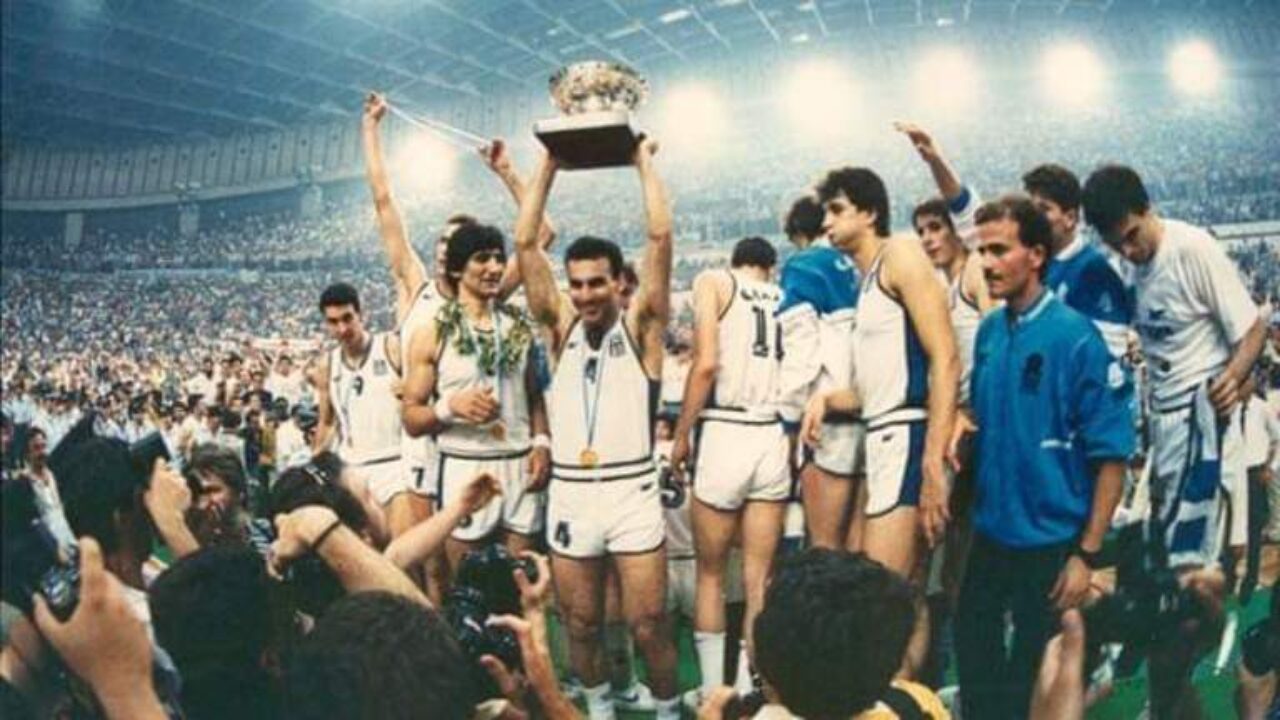 With top athlete Nikos Galis by far, the Greek national team, which until then had no distinction at the top level, prevailed against teams with a huge history in the institution such as the Soviet Union and Yugoslavia. He became a leading European basketball player in 1987. Now, formally, he was one of the leading athletes in European basketball.

The next three seasons were a period when Aris was the leader of the sport in Greece but also one of the top teams in Europe. In 1988, 1989, 1990, Aris won the double in Greece and participated in three consecutive final four of the European Champions Cup with Galis leading the team.

In 1989, in the final four in Munich, Aris won 3rd place in the Champions Cup and this is the best performance in the history of the club in the top European tournament. In the summer of the same year, Galis became the top scorer in Eurobasket 1989 and led the Greek national team to the silver medal.

This distinction was considered of equal value with the conquest of the first place in 1987, as the opponents were even stronger and the level more difficult. In the semi-final against the Soviet Union, Galis scored 45 points, securing the silver medal and proving that the National Team of Greece now belonged to the top national teams in Europe. 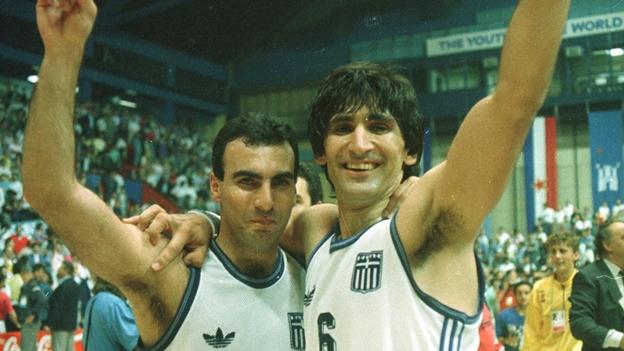 In the same year, he was voted among the top 50 basketball players in the history of FIBA ​​by the official magazine of FIBA ​​Magazine. In 1992, he won the Greek Cup, while in the final of the Greek Cup against AEK on May 13, 1992, he made his last appearance with the colors of Aris and scored 18 points. At the end of the year, he left Aris as his contract was not renewed. 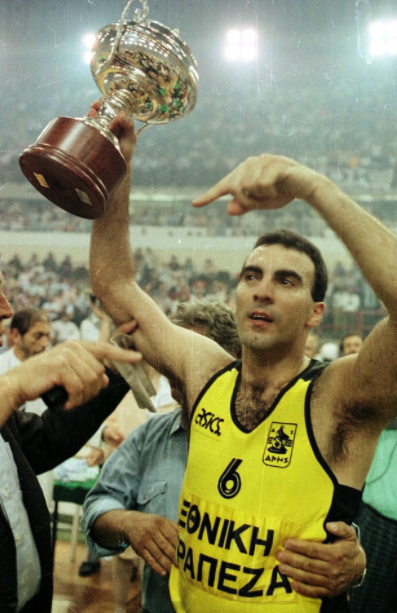 In 1992, he was acquired by Panathinaikos, which had finished in 8th place, which was the worst performance in its history. Nikos Galis was the leader in the recovery of Panathinaikos and his arrival ended the period of competitive crisis and the club returned to the championship course.

In 1993, with 36 points in the final against Aris, Galis led Panathinaikos to win the Greek Cup after 7 years. He led Panathinaikos to the final of the Greek championship with home advantage, but after a decision by Pavlos Giannakopoulos, the team left to protest against the refereeing. In the 1992-93 season, he returned to the top three scorers and this happened the following season too. 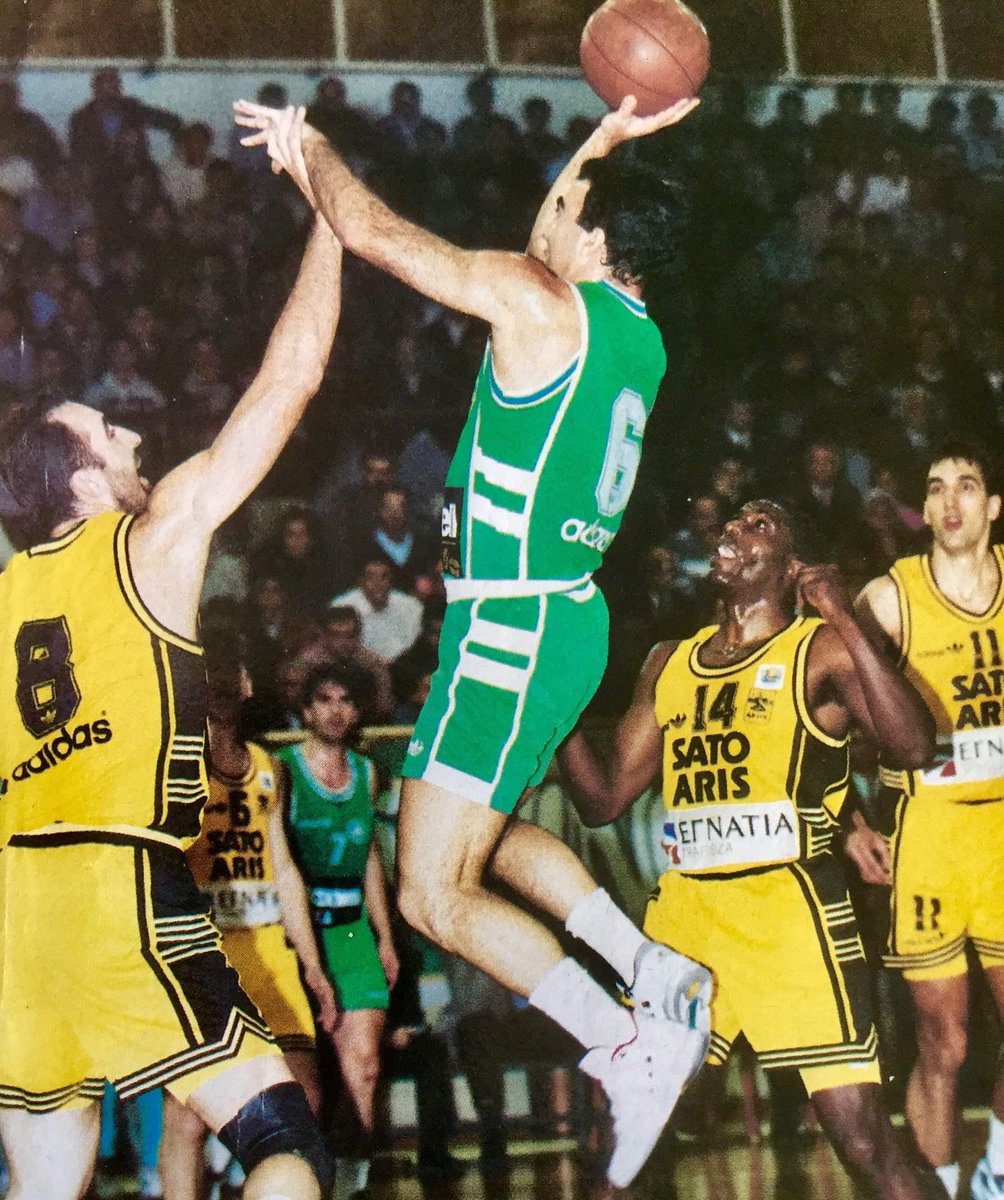 In the year of his arrival, Panathinaikos was out of Europe after 24 years, while with the arrival of Galis he regained the right to participate in the European Championship after 9 years of absence and scored the biggest European success in its history until then.

In the 1993-94 season, Galis led Panathinaikos to the top scorer and passer in the European Championship, leading the club to the final four of Tel Aviv. With 30 points against Barcelona, ​​Panathinaikos won third place in Europe and Galis, for the second time in his career, became the third European athlete, after 1989 with Aris. Also, with the collection of points he scored in the final four of Tel Aviv, he reached 231 points in the final four, a performance that ranks him first to date. 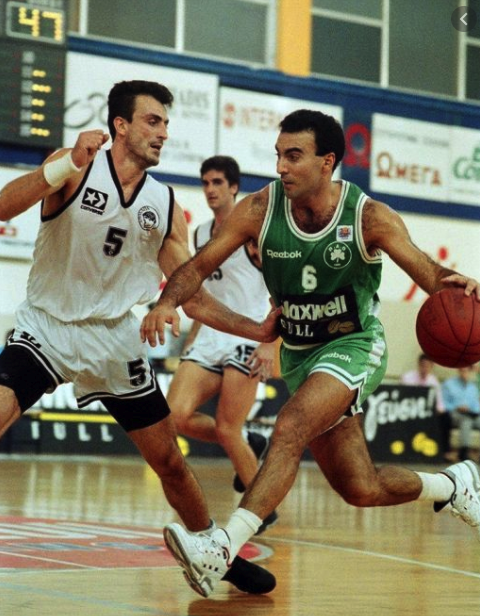 At the beginning of the 1994-95 season, Panathinaikos acquired Panagiotis Giannakis and set the goal of winning the European Championship. Galis was still the top performer, but the team’s performance showed weaknesses at a time when Panathinaikos had to claim qualifications from a very early stage in knockout matches. 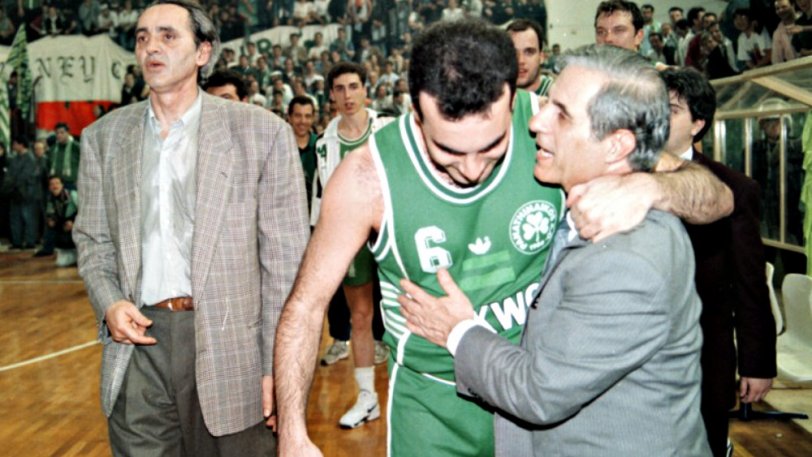 Coach Costas Politis decided to limit his participation time, making Galis consider that he was not treated fairly, as he still had a remarkable performance. On October 18, 1994, in a match against Ampelokipoi, Galis did not start as a key player and, considering the coach’s behavior unfair, left the court.

The president of the team, Pavlos Giannakopoulos, tried to bridge the gap without success. He then changed coaches in order to get Galis back. Despite Gali’s denials, Giannakopoulos continued to pledge and pay his contract in order to rejoin the team next year alongside Dominic Wilkins, a move that was met with Malkovich’s refusal. 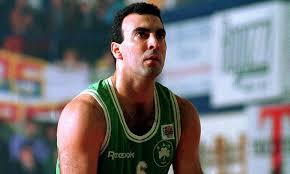 It was also suggested by Giannakopoulos to Galis to return to Aris, but his coach, Lefteris Subotic, and Galis himself, who preferred to transfer to AEK, refused.

The consequence of the impasse was the decision of Nikos Galis to announce on September 29, 1995, the end of his career. On October 21, 1999, the relationship between the Giannakopoulos brothers and Galis was officially restored as he was awarded by Panathinaikos in the Euroleague halftime match against Real. On May 6, 2007, he was honored by the Euroleague in the OAKA final, in the presence of 20,000 fans, in one of the biggest standing ovations in the history of Greek basketball. 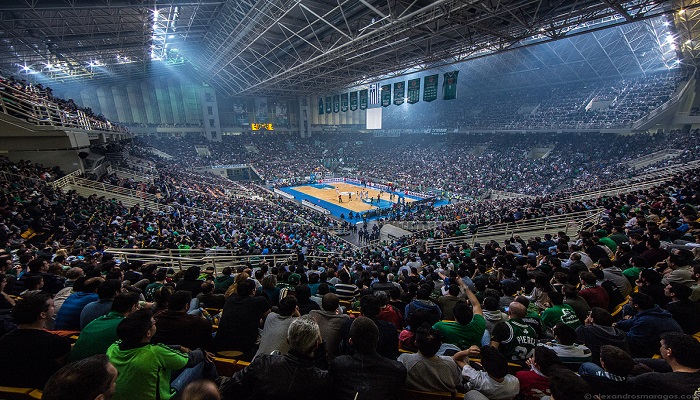 After retiring from the sport, he set up a sports camp for children in Halkidiki until 2006. In 2004, he transferred the Olympic Flame as the first torchbearer in the Olympic Stadium for the opening ceremony of the event. In 2007, he was honored with the Euroleague Medal of Honor and became a member of FIMPA’s European Hall of Fame during the institution’s first selection.

On May 7, 2013, an event was organized by KAE Aris in his honor. The event took place at the Alexandreio Melathron in Thessaloniki, which was attended by big stars in the history of European basketball, such as Panagiotis Giannakis, Dino Raja, Zeljko Obradovic, Stojan Brankovic, Dorondirkortekor Jazmi, Fazri, Ricard Daku. Norris et al. 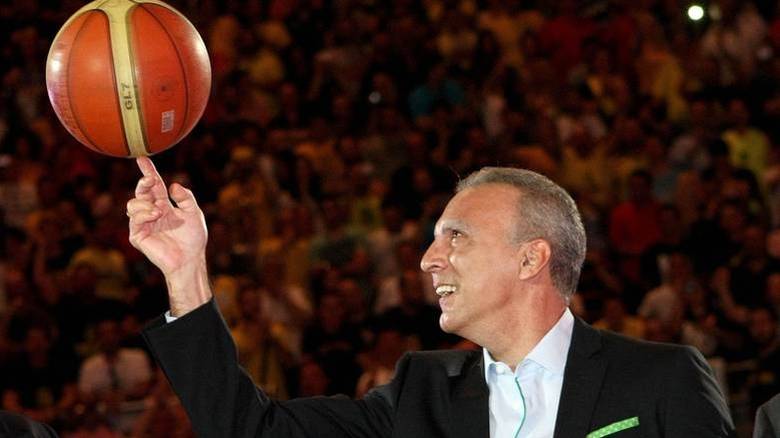 As part of the event, a friendly match was held between Aris and Limoges. Nikos Galis said «Alexandreio is my home and everyone in Aris is my family. There is no greater honor for an athlete than his favorite team hanging his jersey high”, while after a decision of the Greek government, the main hall of Alexandreio (the playing field) was renamed to Nick Galis Hall, in honor of him. 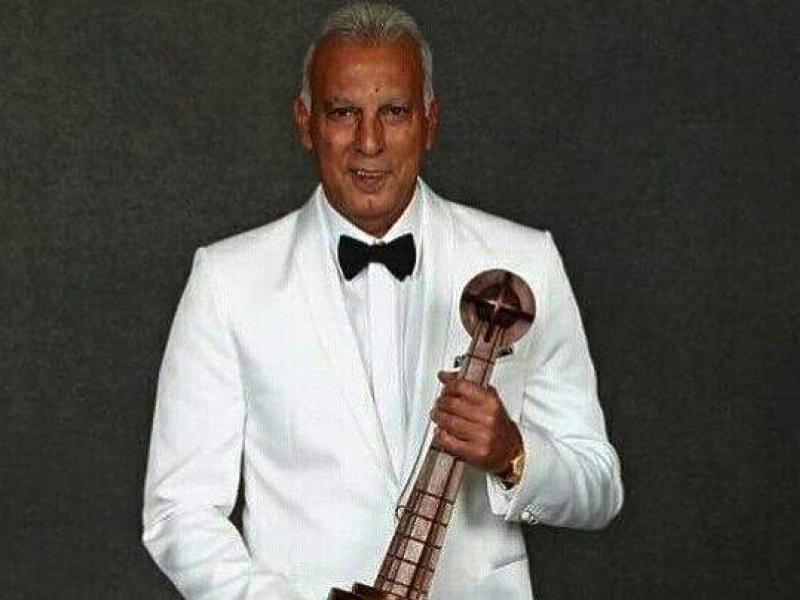 Great figures of the sport have said about Galis:

“If I’m the devil’s son, then Nikos Galis is the devil himself” (Drazen Petrovic)

“I didn’t expect such a good attacking player in Europe and especially in Greece to exist”, (Michael Jordan)

“Drazen is my brother, but for the best athlete of 1987 I voted for Galis “, (Alexander Petrovic, coach)

“Galis is the player of the 21st century. I take my hat off to him “, (Alexander Gomelsky, coach)

“Come on, stop joking around. You have brought Galis with you, but you are hiding it from me “(Antonio Diaz Miguel, coach of the Spanish National Team in 1990 before the match between the two teams)

“If Galis wants to put a field goal, whoever the opponent is, he will do it ” , (Arvindas Samponis)

“I saw Galis do things that weren’t done to the Lakers or the Celtics either,” (Bob McDonough).

“I told my players that we would block the four Aris players and we made our plans. For Galis, we prayed, “(Boyce Krajowski, Lech Poznan’s coach).

“I know one way to stop Galis: to lock him in the hotel! “(Pound Harvey, Dutch coach)