Yiannis Moralis (1916 – 2009) was one of the most prominent Greek artists of the last century. His election as a professor at the Athens School of Fine Arts and his teaching work there, for 35 consecutive years, proved to be decisive for a number of choices and directions of the 20th century’s Greek art production.

Born in Arta on April 23rd, 1916, he was the second of the four children of Constantine Moralis and Vasiliki Michalis. The family settled in Preveza in 1922, where Constantine Moralis served as a high school Principal. In 1927 they settled permanently in Athens, in Pangrati. In the same year, young Yiannis Moralis, who has already made the decision to become a painter, also secured the permission of his father – who has now recognized the son’s artistic nature – to be able to attend the “Sunday lesson” in the Athens School of Fine Arts (ASFA).

In 1931, he is the year when he is preparing for the entrance examinations at the ASFA, and succeeds in joining the Preparatory Section with Professor Dimitrios Geraniotis. He is then acquainted with Yiannis Tsarouchis and Christos Capralos and reunites Nikos Nikolaou, whom he had met a few years ago, in the “Sunday lesson”. 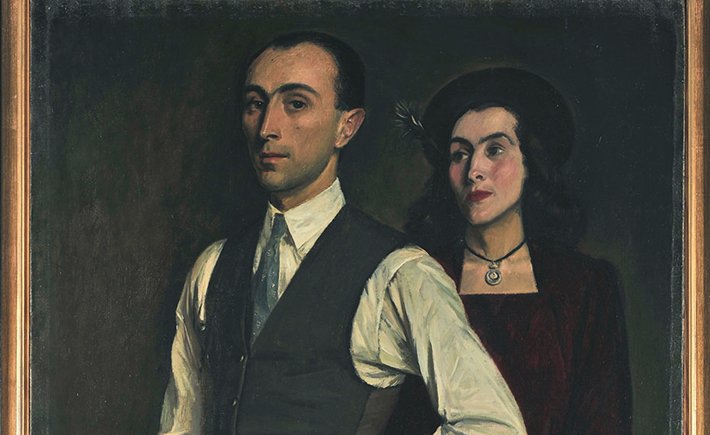 Moralis is among the students whom Konstantinos Parthenis chose for his workshop. “There was a very rigorous atmosphere. Upon him asking something, he would reply to me: “What I told you.” It was very meticulous there, I stayed only two months, and then I went to Umberto Argyros. The whole company – Nikolaou, Capralos, etc. was there. Argyros was “Free Corfu“, letting you do whatever you wanted! Imagine that I was working with round brushes and I was not using white but, “jaune de Naples”. I had complete freedom”, Moralis stated in the past.

A year later, in 1932, D. Kokkinos published in the journal New Estia the first enthusiastic critique of  “the young Mr. Voralis”, as he insists on calling him wrong in his article, on the occasion of the report of the students of the ASFA. Yannis Moralis is then only 16 years old. At the same time, he began to follow the new engraving workshop of Yiannis Kefallinos. “I was one of his first students. For four years, I attended the afternoons in his workshop. As a newcomer from Paris, handsome, educated, cosmopolitan, Kefallinos was for me a father, a teacher and a friend”, says Moralis.

The acquaintance of Moralis with Tsarouchis, Capralos and Nikolaou, will be a milestone in his life and his subsequent brilliant career, since the fellow students at ASFA become very close friends. Tsarouchis evolves into a great mentor for Moralis, as he introduces him to the secrets of the art of painting. His closest friend will be Nikos Nikolaou, who will claim as a “rival” a postgraduate scholarship in Italy from the Academy of Athens. The agreement between them was the following: Any one of the two friends won would share the money with the other and they would leave together for the neighboring country. Moralis graduates from the ASFA in 1936 and eventually Moralis wins the scholarship and travels with Nikolaou to study in Rome, in June 1937. 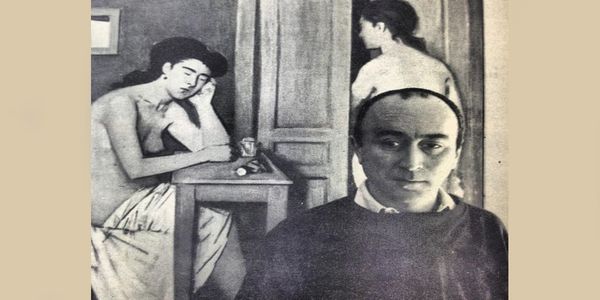 Moralis would stay in Italy until November 1937, when he is moving to Paris and settling there. With the declaration of World War II, most students are forced to abandon their studies in Paris and so is Moralis, who returns to Greece hurriedly.

In 1940 he exhibited a series of engravings with the group “Free Artists” in Piraeus, for which he will also draw the cover of the catalog. In the spring he is assigned to the army and serves his term while participating in the last pre-war Pan-Hellenic Exhibition in Zappeion, where he also receives the bronze medal.

In 1941 he marries Maria Roussen and in the years of Occupation, Moralis is intensely engaged in portraiture to ensure a steady income, by painting portraits on demand. With Roussen he will divorce in 1945 and two years later he will marry the sculptor Aglaia Lyberakis, with whom he will have a son, Konstantinos, and will remain married to her until 1955. In 1947, he was elected a regular professor of the Preparatory Course at the School of Fine Arts and began teaching in February of the following year. 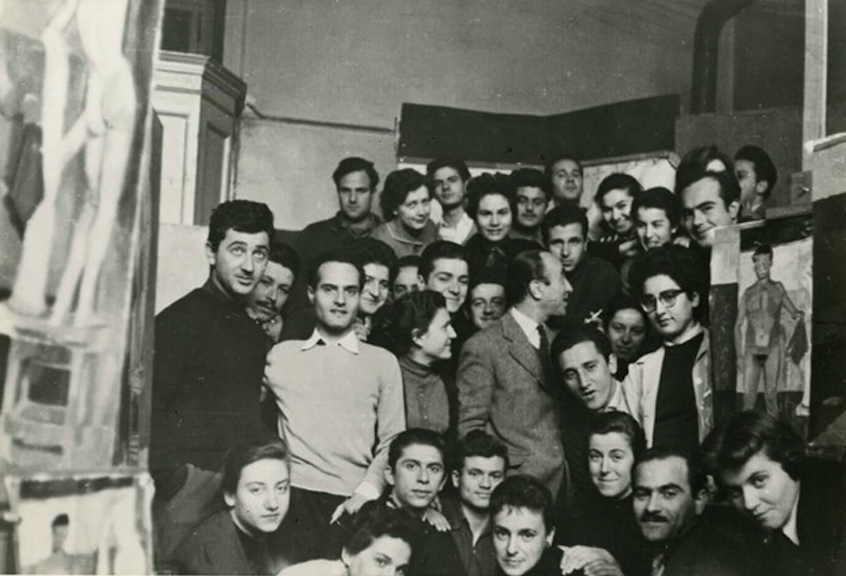 In the first, after WWII, Greek national exhibition in 1948, Moralis exhibited the works: “Pregnant woman”, “Two friends”, “The painter with his wife” -where he portrayed himself with his first wife- and “The table”.

In 1951 he draws the cover for “Submarine Y1 Katsonis”, a book by Elias Tsoukalas, published by “Ikaros”, a company with which Moralis will continue to collaborate until the end of his life. In 1952 he participates in the Pan-Hellenic Exhibition in Zappeion, with the works “Nymph” and “Morfi”, among others, and in “Armos” -teaming up with important contemporary artists- from December to January 1953.

Later, in 1953, Moralis visits Russia as a guest of the Russian Government, along with representatives of intellectual and political life from Greece and Europe. The next year he begins his year-long collaboration with Karolos Koun’s Art Theater, as he designs the sets and costumes for the play “Naked masks” by Luigi Pirandello.

Moralis was elected a regular professor of the Painting Lab at the ASFA in 1957, and his collaboration with the National Theater began than year also. In 1958, together with Yiannis Tsarouchis and sculptor Antonis Soutsos, he represents Greece at the Venice Biennale. The curation of the Greek pavilion is at that time by T. Spiteris. In a Biennale where the dominance of abstraction is obvious, Moralis and Tsarouchis will provoke Gio Ponti’s interest in their portraying, anthropocentric painting. 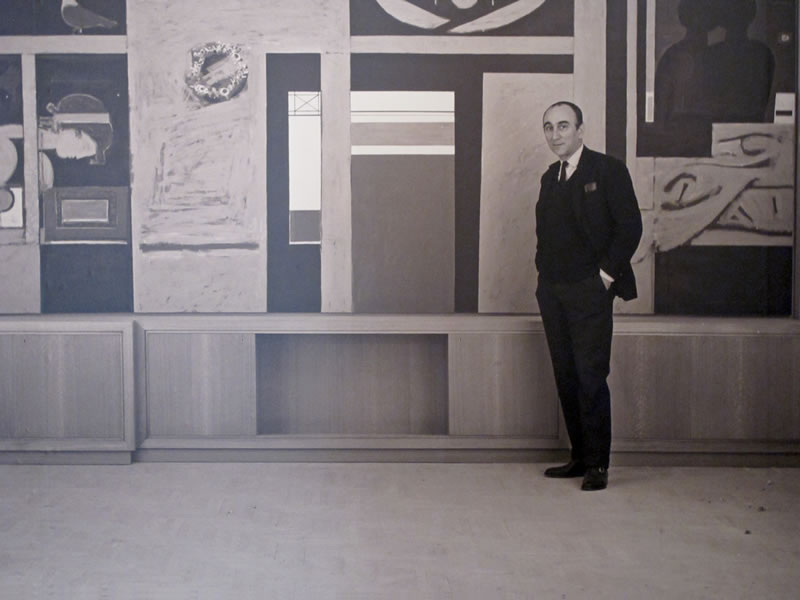 Moralis’ first solo exhibition is organized in 1959 and takes place in the exhibition hall “Armos” in Kolonaki. The works that are exhibited there, are to a considerable extent those with which he had participated in last year’s Venice Biennale.

In 1959, the architects Vasiliadis, Vourekas and Staikos assigned him to study the decoration of the outer walls of the Northwest and Southwest side of the Hilton Hotel in Athens, where finally the engraved marble composition by Moralis is completed in 1962. Since then, he has worked with Greek and foreign architects, such as Sir Basil Spencer and Anthony Blee, for decorating homes and public buildings. 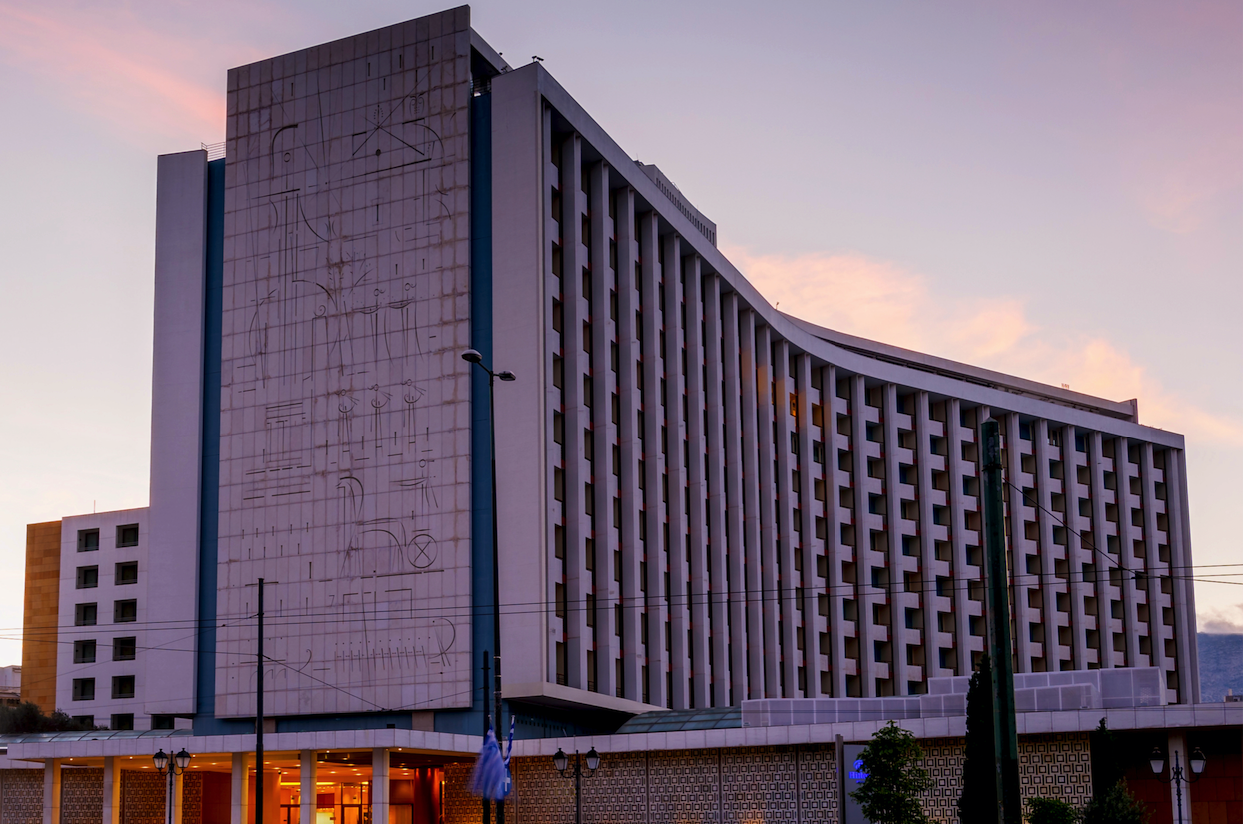 His second solo exhibition will take place in 1963 in the Art Hall of the Athenian Hilton Hotel. It will present the work of the last three years. Of particular interest is the series of “tombstone” compositions, which will later be donated by him to the National Gallery. Among the works of the exhibition, which will also be part of his donation to the Art Gallery, are the works: “Nude”, 1962, “New Woman”, 1962 and “Remembrance”, 1963. In 1965 he was awarded by King Constantine of Greece the title “Commander of the Phoenix”, while it is the year during which he creates ten compositions that interpose between the poems in the collection “Poems by George Seferis”. 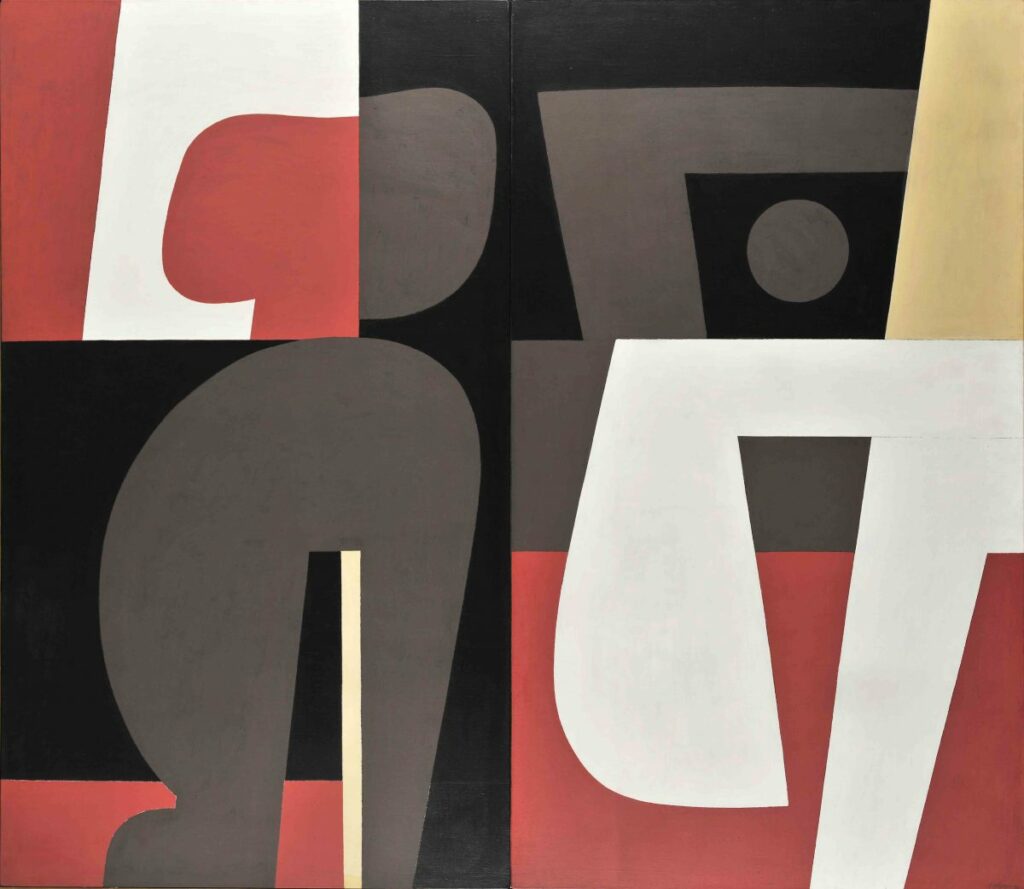 With his third solo exhibition in 1972 at the Iolas-Zoumboulakis Gallery, Yiannis Moralis inaugurates another long collaboration. His painting will now experiment on the level of the form with this “alphabet of few digits”, which Odysseus Elytis so aptly said in the introductory text of the catalog. In 1972 he also participates for the second time at the Tapiceri Biennale of Lausanne, and next year he takes part in the International Craft Exhibition in Munich and is awarded with a gold medal.

In 1978 he participates in the international exhibition “Seconde Rencontre Internationale d’Art Contemporain” at the Grand Palais in Paris, along with 22 Greek painters and sculptors selected by the National Gallery. In 1979 he was awarded the “Exceptional Merit Award” by the Academy of Athens. During the 1980s he will have another solo exhibition, in 1983, at the Zoumboulakis Gallery. Among the works of this exhibition and the “Erotic”, 1982, which was acquired by the National Gallery. In 1988, Yannis Moralis made his great donation to the National Gallery-Museum of Alexandros Soutsos, and in 1998 he was awarded the title “Commander of Honor” by the President of the Hellenic Republic. 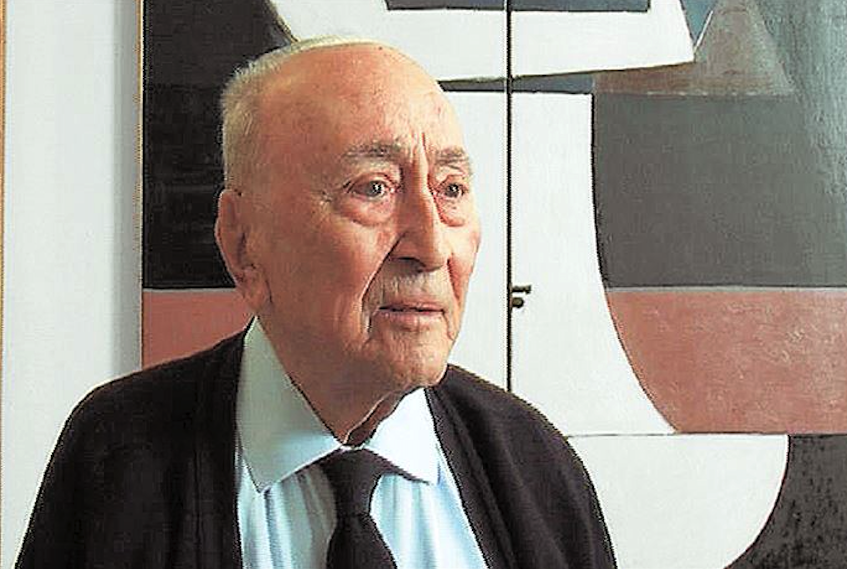 In 2008, the exhibition titled “Moralis – A Detection” follows in the Museum of Contemporary Art of the Basil and Elise Goulandris Foundation in Andros, as well as the exhibition of the National Bank Cultural Foundation entitled “Yiannis Moralis – Drawings 1934-1994”.

The great passion of Yannis Moralis was painting and women. He was almost obsessive with his art, and he had great love for his paintings. Indeed, he had once stated in one of his few interviews in the newspaper “Kathimerini” that he did not sell his works easily, because he did not want to separate from them. But he lived through periods of economic hardship, and he had no choice but to sell some of his paintings. However, when he sometimes met an owner of one of his paintings, he asked him if it needed to be varnished, as a way to know about its current condition.

As Moralis grows older, his painting evolves, as one can observe. More and more subtle compositions make their appearance. At the beginning of his painting, he places the realistic human form as his basic axis. The dark shades, which he uses in combination with the calm light that surrounds him, give a realism with a certain psychological depth.

After the war, Moralis escapes from the naturalistic element, which was intense in his earlier paintings, and tries a more progressive, abstract style. The female figures, which were a significant source of inspiration for all of his work, are becoming more massive, while the lines of the female body are no longer very clear. But then, the more abstract they became, the more they exuded a powerful, primitive sensuality.

In the last years of his life, the female figure was liberated increasingly from its dominant features. The amorous compositions of Yiannis Moralis continue to provoke intense eroticism with a dose of melancholy. It is perhaps his last attempt to reconcile with the idea of death through the magic of love. 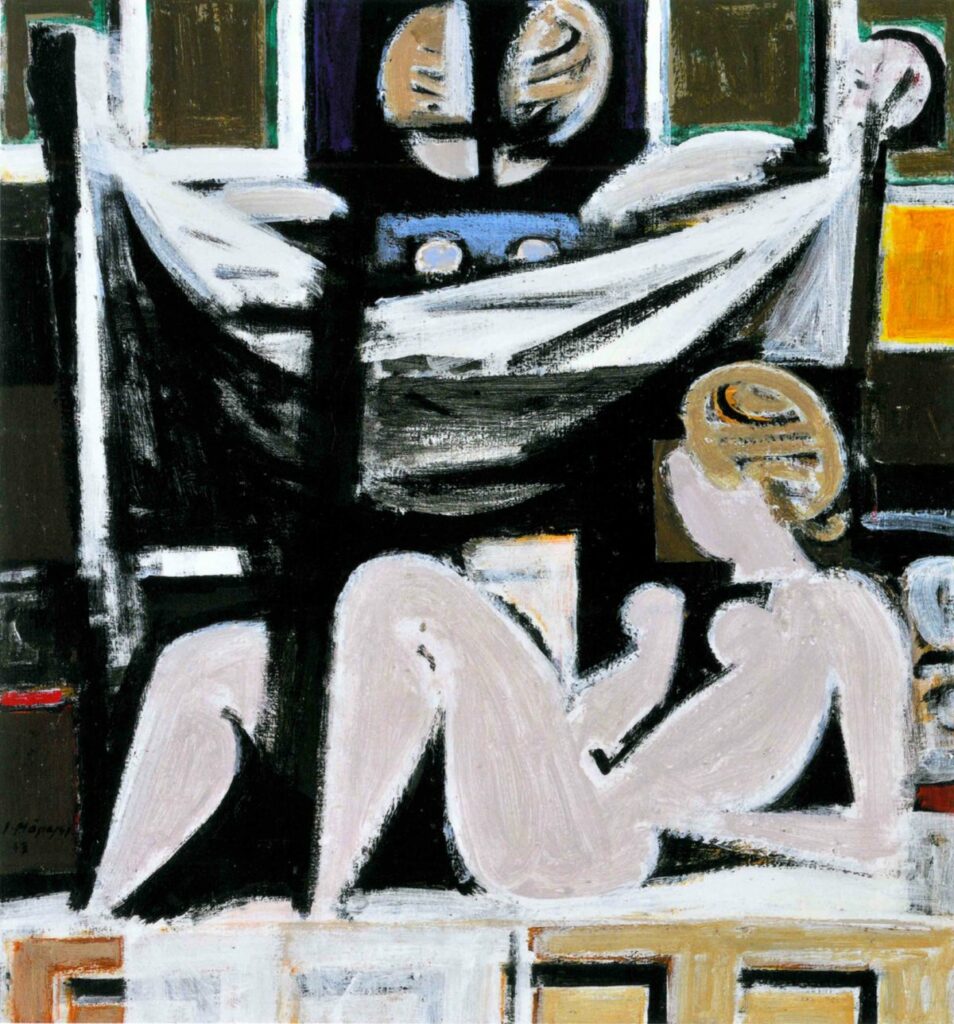 Moralis was a man of unique diathesis. For example, his close friendly relations with Tsarouchis and Hadjidakis have always been quite equal to those he held with all his close and dear friends. It was very rare at that time, within the patriarchal structure of society, and even more so by the guild of visual artists, to have such acceptance and, above all, to overcome the course of their own sexual diversity. And this was despite the fact that Moralis did not have what we would now recognize as an advanced theoretical thought, so that his attitude towards this particular subject would be justified. He was the painter of his generation who perhaps had the smallest theoretical background. However, it was counterbalanced by his vast empirical education. His attitude, therefore, to the homosexuality of Tsarouchis and Hadjidakis has more to do with his character, who, deep down, was that of a very shy man.

Moreover, Moralis was a man unable to hate. He could get angry with some things, but he did not hate people, nor did he like to argue with them. He preferred to be silent. He was, indeed, only passionate about painting, women and the female form.