Greek researcher sheds light in the bacterial ‘Game of Thrones’

In a study published in Current Biology, researchers at the University of Oxford and the Imperial College, led by a Greek researcher, have shed light on this area of bacterial behaviour, revealing that bacteria approach conflict in much the same way as an army by responding to a threat with a coordinated, collective retaliation. Much like animals and to a degree humans, bacteria enjoy a good fight. They stab, shove and poison each other in pursuit of the best territory. While this much is clear, little is known about the tactics and strategy that bacteria use during their miniature wargames.

The study’s lead authors were Despoina Mavridou from the Imperial College and Kevin Foster, Professor of Evolutionary Biology in the Department of Zoology at the University of Oxford.

The team studied pairs of Escherichia coli strains as they fought against each other. Each strain uses a particular toxin to try to overcome its competitor. A strain is immune to its own toxins, but it can kill other strains. This type of competitive interaction plays a key role in how individual bacteria establish themselves in a community, such as the human gut. By engineering the strains to have a fluorescent-green colour, the authors were able to clearly follow their combat in real time.

The findings revealed that not all strains of bacteria fight the same way. Each approaches conflict with a different level of attack, some being hyper-aggressive and others much more passive. In addition to these basic differences in aggression, the research also shows that some strains can not only detect an attack from an incoming toxin, but they can also respond quickly to warn the rest of the colony. Cells on the edge of the colony will detect the incoming attack, and share this information with the cells behind the battlefront, allowing them to respond as a collective, in a coordinated and surprisingly sophisticated fashion.

While these phenomena are well known in animals, the study is a first of its kind for observing this behaviour in bacteria. Professor Kevin Foster, senior author on the work and Professor of Evolutionary Biology in the Department of Zoology at the University of Oxford, said: ‘Our research shows that what appear to be simple organisms can function in a very sophisticated manner. Their behaviour is more complex than we have previously given them credit for. Much like social insects, such as honey bees and wasps and social animals like birds and mammals who use alarm calls, when under predation, they are capable of generating a coordinated attack’.

Since the human body plays host to vast numbers of bacteria, particularly our gut microbiome, this effectively means that there is a bacterial war going on inside us. Understanding bacterial competition can help us to understand how bacteria spread, where and why. Professor Foster explains: ‘We know from other studies that toxins are important for whether or not a particular strain will establish in a community. But understanding how bacteria release toxins and outcompete others is very important for understanding the spread of infection.’

The team are in the process of building on this work to understand how bacteria can use toxins to provoke and misdirect aggression in their opponents. Dr Despoina Mavridou, one of the lead authors on the study, said: ‘Warfare based on provocation can be beneficial. It is most likely taking place in the gut, where bacteria may provoke multiple opponents to attack and wipe out each other.’ 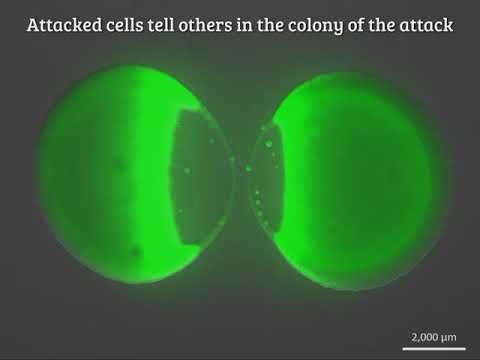