James Stavridis is being vetted as Hillary Clinton’s Vice President

Hillary Clinton’s campaign is vetting James G. Stavridis, a retired four-star Navy admiral who served as the 16th supreme allied commander at NATO, as a possible running mate, according to a person with knowledge of the vetting process, according to NY Times.

Some close to Mrs. Clinton, the former secretary of state, say she was always likely to have someone with military experience on her vice-presidential shortlist, and Mr. Stavridis, currently the dean of the Fletcher School at Tufts University, fits the description.

During his four years as NATO’s supreme allied commander, he oversaw operations in the Middle East — Afghanistan, Libya and Syria — as well as in the Balkans and piracy off the coast of Africa.

The Clinton campaign declined requests for comment, and Mr. Stavridis declined to comment other than referring calls to the campaign. The person with knowledge of the vetting spoke anonymously because of the sensitive nature of the process.

James Stavridis attended the US Naval Academy at Annapolis, and spent over thirty years in the Navy, rising to the rank of 4-star Admiral. Among his many commands were four years as the 16th Supreme Allied Commander at NATO, where he oversaw operations in Afghanistan, Libya, Syria, the Balkans, and piracy off the coast of Africa.

He also commanded US Southern Command in Miami, charged with military operations through Latin America for nearly three years. He was the longest serving Combatant Commander in recent US history. In the course of his career in the Navy, he served as senior military assistant to the Secretary of the Navy and the Secretary of Defense. He led the Navy’s premier operational think tank for innovation, Deep Blue, immediately after the 9/11 attacks.

He won the Battenberg Cup for commanding the top ship in the Atlantic Fleet and the Navy League John Paul Jones Award for Inspirational leadership, along more than 50 US and international medals and decorations, including 28 from foreign nations. He also commanded a Destroyer Squadron and a Carrier Strike Group, both in combat. He earned a PhD from The Fletcher School at Tufts, winning the Gullion prize as outstanding student in his class in 1983, as well as academic honors from the National and Naval War Colleges as a distinguished student.

He speaks Spanish and French and a little bit of Greek. Jim has published six books on leadership, Latin America, ship handling, and innovation, as well as over a hundred articles in leading journals. An active user of social networks, he has thousands of followers on Twitter and friends on Facebook.

He is the 12th Dean at The Fletcher School, a post he assumed in the summer of 2013. He is happily married to Laura, and they have two daughters – one working at Google and the other an Ensign in the US Navy. 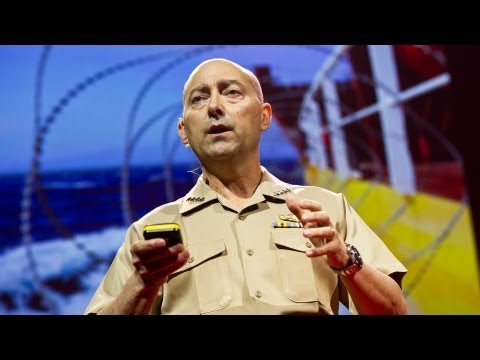