National Geographic makes a tribute to the special laser used to remove decades of grime from iconic marble statues in Athens, with the title «2,500-Year-Old Greek statues that sparkle after facelift»Read below the detailed article:Four marble maidens from ancient Greece have just gotten a facelift. Using a specially designed laser, conservators have labored since 2011 to strip away the black grime that encrusted the statues. Today the final figure to undergo the treatment is being revealed in all her splendor in the new Acropolis Museum in Athens, which celebrates its fifth anniversary this Friday, June 20.

The maidens, known as the Caryatids, stand more than seven and a half feet tall (2.3 meters). Originally, six of them held the roof of the Erechtheion’s south porch on their heads. One was taken to London in the early 19th century and is now on display in the British Museum. Another was cleaned in 2006 and was not part of the current project.

As Athens rapidly industrialized over the past century, the five figures remaining on the Acropolis suffered gravely from the effects of air pollution. Their golden hue turned dark, and their features began to dissolve under the constant assault of acid rain. In 1979 the figures were moved to the old Acropolis Museum to protect them from further damage, and cement replicas were installed in their place on the Erechtheion’s porch.

In this March 28, 2014 photo, conservators work inside a white fabric box to clean a Caryatid as tourists visit the Acropolis museum in Athens. It takes about seven months to clean each of the larger than life-sized statues, which were carved around 420 B.C.

In a gallery of the Acropolis Museum in Athens, conservators clean one of the marble statues in a makeshift lab as visitors watch their progress on a video monitor.

When the new Acropolis Museum opened in 2009, the figures immediately became a magnet for visitors. «For the first time in history, everyone could see them up close, and from all sides,» says Katherine Schwab, an art historian at Fairfield University in Connecticut who specializes in ancient classical sculptures. «The Caryatids are over life-size, so there’s that sense of an exhibit that’s larger than life.»

The figures” clothing and hair offer clues to their identity. «These maidens most likely represent young teenagers from elite families of Athens who would be given the lead positions in a religious festival procession,» Schwab explains. «The luxuriousness of the hair indicates how healthy and beautiful they were. They were in their prime as maidens. They were very marriageable.»

At the start of the cleaning project, conservators decided not to move the maidens, but to work on them where they stood in the museum’s public gallery. They focused on one figure at a time in a makeshift room whose walls were sheets of heavy fabric hung from a frame. A video monitor outside allowed visitors to see the statues slowly changing color, like night turning to day.

The curtain walls were a critical safety measure to protect museumgoers” eyes from the laser that conservators, wearing protective goggles, used to clean the statues. 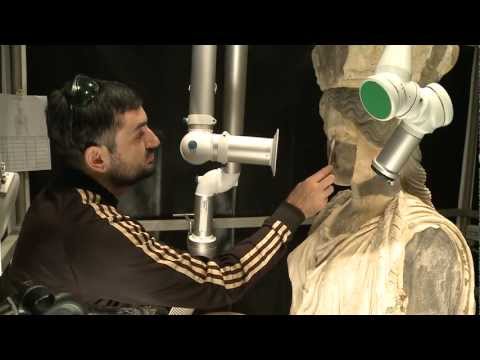