Vangelis Papathanasiou is the most famous Greek music composer in the world and he has been repeatedly awarded for his contribution to the music industry. His talent has captivated millions of fans all over the world.

Evangelos Odysseas Papathanasiou was born on March 29, 1943, in Agria Volos, and since the age of four, he showed his inclination in music, while at the age of 6 he gave his first performance to an audience, while playing his own piano compositions, without ever having received any sort of musical education.

Both his family and his teachers saw how uniquely gifted he had been and encouraged him to broaden his knowledge of music, but the child prodigy never wanted to attend such classes. His ambition was to create his own music, express it just as he listened and felt it. Becoming a piano soloist or playing another musical instrument was not something he wanted. Later, however, he studied classical music, painting and directing, at the Academy of Fine Arts in Athens. 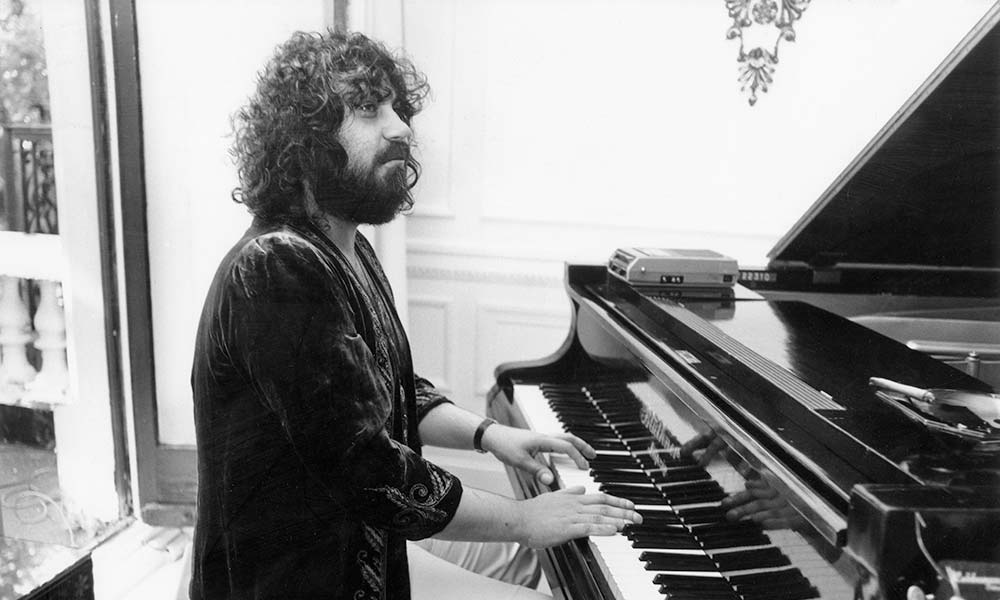 In the 60s, the young composer created the band “The Forminx” which was a huge success in Greece and which made beat music popular across the country. But Greece could not hold back the musical composer; his passion for music led him to Paris, in 1968, where, together with another great Greek artist, Demis Roussos, formed “Aphrodite’s Child” and managed to become the most popular music band in Europe at that period.

Vangelis Papathanasiou’s career did not stop escalating, just like his desire and unstoppable thirst for the creation and exploration of new musical paths. Thus, while still a member of the band, he worked on other projects as well. In 1970, for example, he composed the music for a film by Henry Chapier, a French director, and he was also musically involved in a documentary about the wildlife, with the French director Frederic Rossif, which had great success.

Paris was the first to make him known, but after the end of Aphrodite’s Child, he found his next musical retreat in London, UK, where he still lives up to this day. There, he composed some of his most outstanding works, such as “Albedo 0.39”, “Spiral”, “Heaven & Hell”, “China”, “Beaubourg” and “See you later”. The 1980s was a turning-point decade for his career because he collaborated with the great Greek actor Irene Pappas and Job Anderson, the musician of the band Yes, with whom they recorded many musical albums. 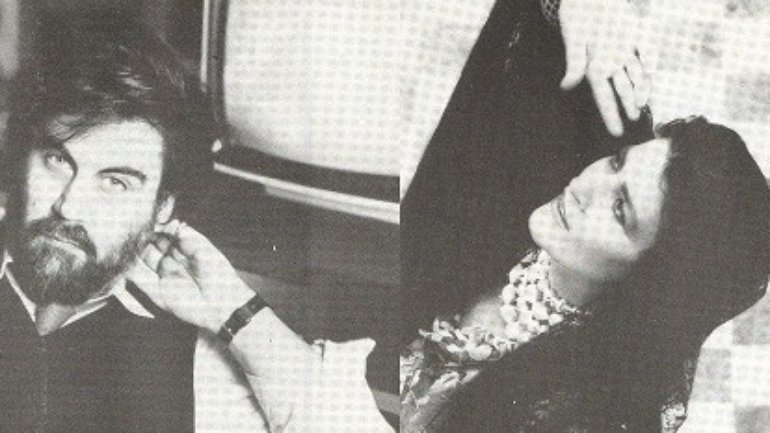 His great success was met by all social classes in 1982 when the composer won the Oscar for Best Song for the film “The Chariots of Fire”. This musical composition continues to cause a thrill at its listening up to today, as it is inseparably linked to the Greek culture and the Olympic ideal.

His subsequent collaborations with Ridley Scott, Kostas Gavras and Koreyoshi Kurahara in the films “Blade Runner”, “Missing” and “Antarctica” respectively, not only made a difference in the whole industry but also showed the artist’s capabilities and musical quality, which worked as such important offers in music in general.

At a later time, Vangelis Papathanasiou created musical pieces for the theater and for dancing performances, while the music he wrote for the performance “Electra”, in which Irene Pappa starred and Michalis Cacoyannis directed, was a great success. At the same time, he wrote the music for the “Frankenstein – Modern Prometheus” ballet in 1985, and “The beauty and the beast” in 1987, which were performed by the Royal Ballet in Covent Garden, London. 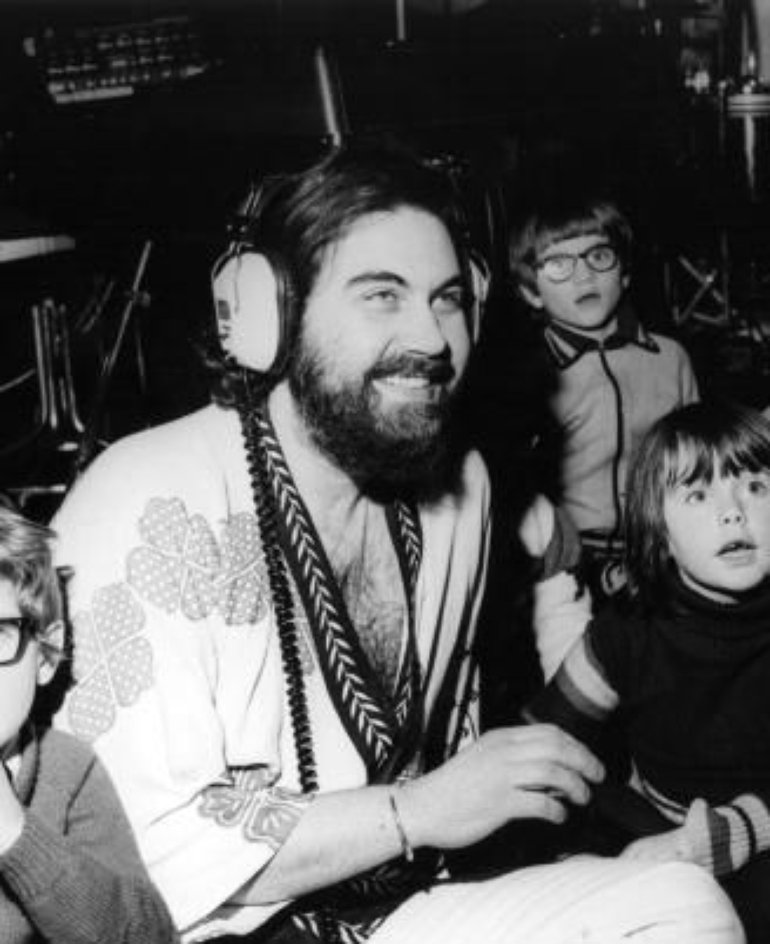 In the late 1980s, he was honored with the distinction of the Max Steiner Award for the composition of prominent cinematic music, being recognized once again as one of the top musicians of the genre.

In 1989, he was once more honored with the annual Max Steiner Award in the fields of composition and presentation of distinguished cinematic music, a distinction presented at the same time as the Hall of Fame Award, accompanied by the following text: “In rewarding of the recognition of the unrelenting effort in the composition of cinematic music, adding dignity and classical artistic creation to the background of cinematographic films.”

In 1990, the album “The City” was released and, at the same time, he directed live the music for the European event “Eureka”, which took place in the Netherlands, presenting his work to over 250,000 people. In fact, the same year, during the International Poetry Day, he was the host of an evening in Herodion, starring Fani Ardan, Marcella Hatziano and Alan Bates. In 1991, Vangelis, as he is internationally known, accepted the invitation to participate as a member of the jury at the Cannes Film Festival.

Soon after, he composed again for the cinema, this time collaborating with Roman Polansky for his film “Bitter-Moon” and continued writing music for other very successful films, such as the well-known “1492: Conquest of Paradise” with which he won the Echo Awards and the Golden Lion Award for Best Motion Picture Soundtrack. The album, in fact, became platinum in 17 countries. 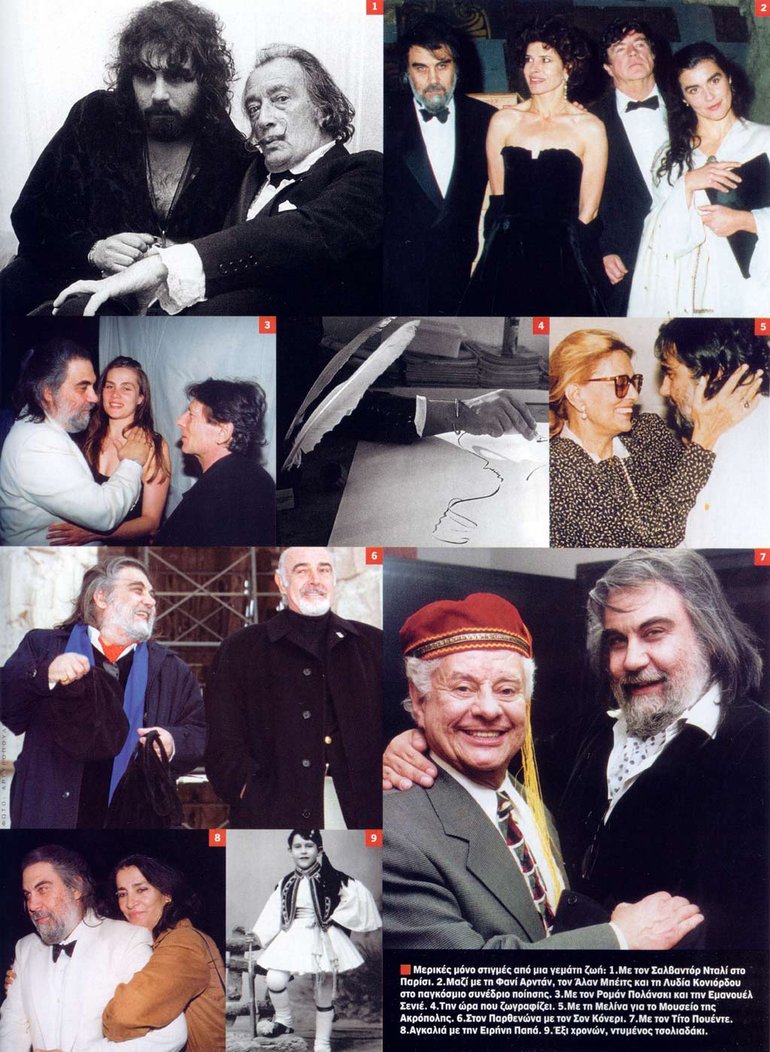 He also collaborated with Jacques-Yves Cousteau, for whom he edited several musicals which were featured in his films, such as the movie “We can not permit”, screened at the 1992 World Earth Conference called “Earth”, which took place in Rio de Janeiro.

In 1996, Vangelis won another distinction, as he was officially recognized as the most successful Greek artist in the world, a fact based on of his albums sales during the World Music Award held in Monte Carlo. In the same year, he composed and recorded the soundtrack for Yannis Smaragdis’ “Cavafy”, a provocative portrait of the famous Greek poet Constantinos Cavafy. The music for this film gave him the award for “Best Soundtrack,” both at the “Flanders International Film Festival in Belgium” and at the “Valencia International Film Festival in Spain”. In 1997, he was once again honored as the “Most Successful Commercial Greek Artist of the World” at the World Music Awards in Monte Carlo.

He also co-wrote with Oliver Stone the music of the film “Alexander the Great” and with Yannis Smaragdis for the historical film “El Greco”, which was an international production. 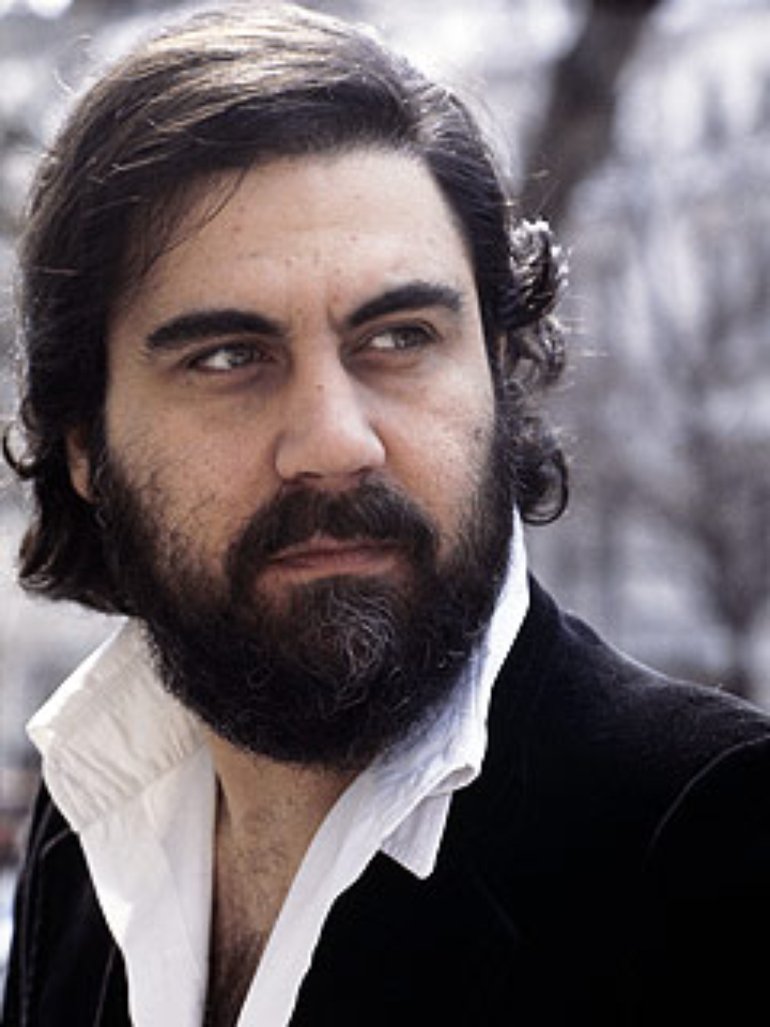 Papathanasiou’s presence is interwoven with the Athens Olympics since he composed the music for the 2004 Olympic Games in 1999 and revealed the official emblem of the Games as well as the music for the ceremony of the Olympic flame delivery both in Sydney and from Sydney to Athens.

In 2003, he revealed his skill in painting, presenting seventy paintings at the Valencia Biennale in Spain. The “Vangelis Pintura” exhibition was moved to Uruguay, Argentina and Brazil, and after its success, the works of art are now exhibited in major galleries around the world.

The exploration of space has excited Vangelis Papathanassiou since his early childhood, as he has stated, and much of his works are dedicated to this, while, over time, top space agencies have entrusted their achievements to his music.

His first acquaintance with the “world of space” took place in 1980 when Karl Sagan’s American television series “Cosmos: A Personal Voyage” was launched, focusing on the man’s position in the universe and the existence of extraterrestrial life. The musical covering of the episodes was created by Vangelis Papathanasiou, while the series won an Emmy Award and was screened to 500 million viewers in 60 countries. 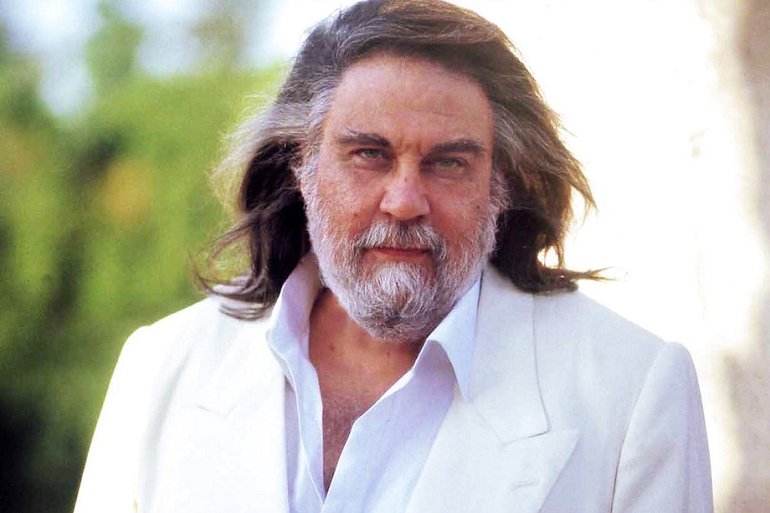 In 1995, the International Astronomical Union Minor Planet Center gave his name (Vangelis) to Asteroid 6354 as a sign of appreciation and respect in his musical offer, but also in his love of space.

In the summer of 2001, he presented the project “Mythodia” at the temple of Olympian Zeus, music which was created to accompany NASA 2001 space mission, “Odyssey on Mars”. It was a spectacular musical performance, during which gods from ancient Greece and NASA’s space images were depicted through special visual effects. The solo parts of the play were interpreted by soprano Jessye Norman and Kathleen Battle. The London Metropolitan Orchestra was also included and the 120-member National Opera Choir too, while the composer handled the keys himself. The project was televised across the globe and after the end of the musical performance, the French Government, represented by the Minister of Education Jach Lang, awarded Vangelis Papathanassiou the title of the Order of the Legion of Honor at a ceremony that took place in the perimeter of Zappeion.

Two years later, NASA honored the famous musician with the public contribution medal in recognition of an outstanding offering to its vision – a prize that is the highest honor of the American Organization for non-governmental people. 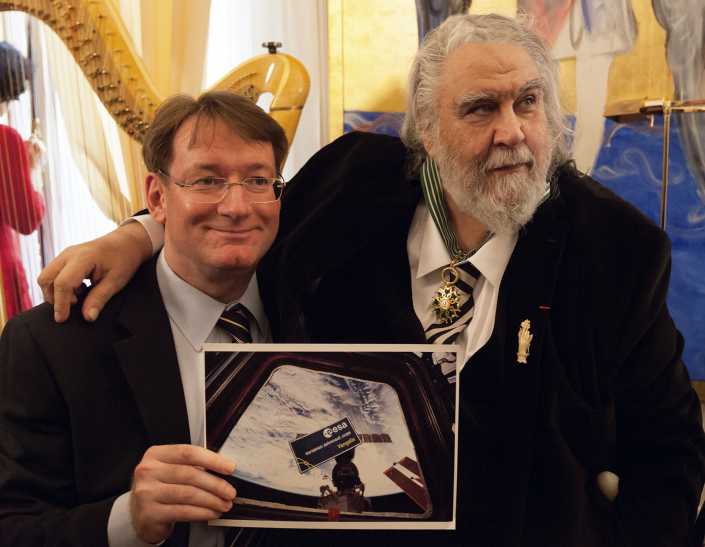 In June 2018, he wrote music for the ash deposition of the famous cosmologist Stephen Hawking, and the song was transmitted, through the European Space Agency, into space in the direction of the nearest black hole, 1A 0620-00 as a tribute to the work and contribution of the deceased scientist to science.

-Oscar for Best Original Song, 1982, for the music in “The Chariots of Fire” film.

-Golden Lion Prize at the Cannes Lions International Festival of Creativity for “Ask the Mountains” on TV advertising.

-Max Steiner Award, 1989, for the composition and presentation of prominent cinematic music.

-Echo Award (Germany) for International Artist of the Year, 1992.

-Apollo Award in recognition of his contribution to music from the Friends of the Athens National Opera Society, 1993.

-The title of Chevalier de la Légion d’ Honneur of the French Republic, in 2001.

-RIAJ (Recording Industry of Japan) Award for international song of the year, 2002.

-NASA’s Public Service Medal in recognition of extraordinary contributions to the NASA vision, 2003.

-In 2013, the Greek Post offices issued stamps that depicted him.

-The International Astronomical Union’s Minor Planet Center at the Smithsonian Astrophysical Observatory named a small planet Vangelis in his honor.

-Employing a Ph.D. degree from the National and Kapodistrian University of Athens in 2008, granting him the distinguished title of Emeritus Professor. His doctorate was given for his outstanding contribution to the music education of the Greek people, as well as for the dissemination of the message of Hellenism all over the world. 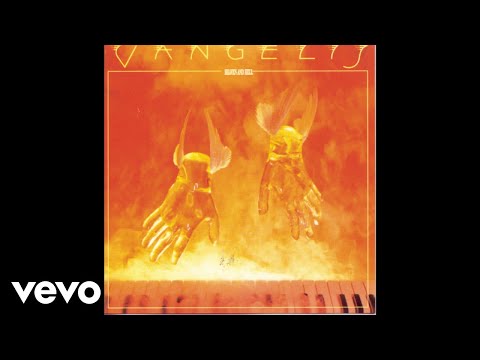