The treasure of mountainous Korinthia

On the western side of the prefecture of Korinthia and on the outskirts of the mountains Helmos and Ziria, lies the area of Feneos, which is characterized by landscapes that refer to pictures of Switzerland, with sights and natural beauties. its short distance from Athens makes it a tempting destination for short trips.

The Municipality of Feneos is in a sloping location with a base altitude of 912 meters and a peak of 1,024 meters. Ancient Feneos was a great city-state of Arcadia and in recent years, the ancient city has been excavated and is now accessible for visiting. 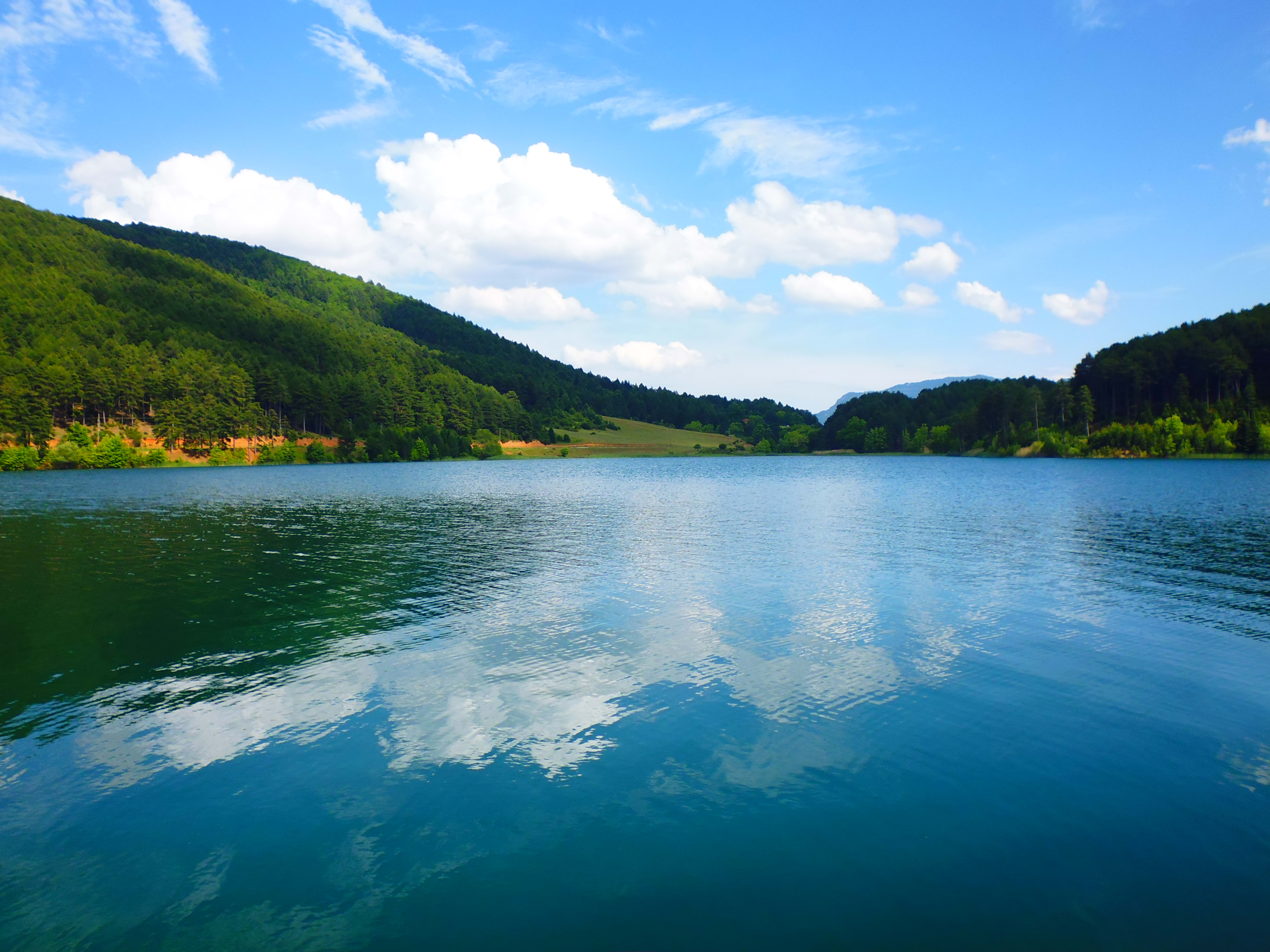 The ancient walls, the temple of Asclepius, many ruins of ancient buildings, statues and plaques found at the archaeological museum in Messinos have been discovered. Also, the visitor can see the sinks that exist and are still functioning today.

According to Homer, the Feneates took part in the Trojan War. The existence of a town in the area of Feneos is also mentioned by Pausanias in the books with his tours. Certainly, the archaeological finds found in the Feneos area leave no doubt that this place has been inhabited since antiquity. At that time Feneos belonged to Arcadia and not to Corinth as it belongs to the newer, and more specifically to the last 100 years.

The inhabitants of the villages of Feneos offered their services to the Greek nation during the final period of the Ottoman domination and the beginning of the Greek Revolution of 1821 -stories talk about a great battle with the Turks in the area of the present village of Mati- while according to some rumors the Revolution was to begin from the Monastery of Saint George but it eventually started from Kalavrita. In the Second World War, the Feneates also took part with most of them fighting in the battle of Crete. 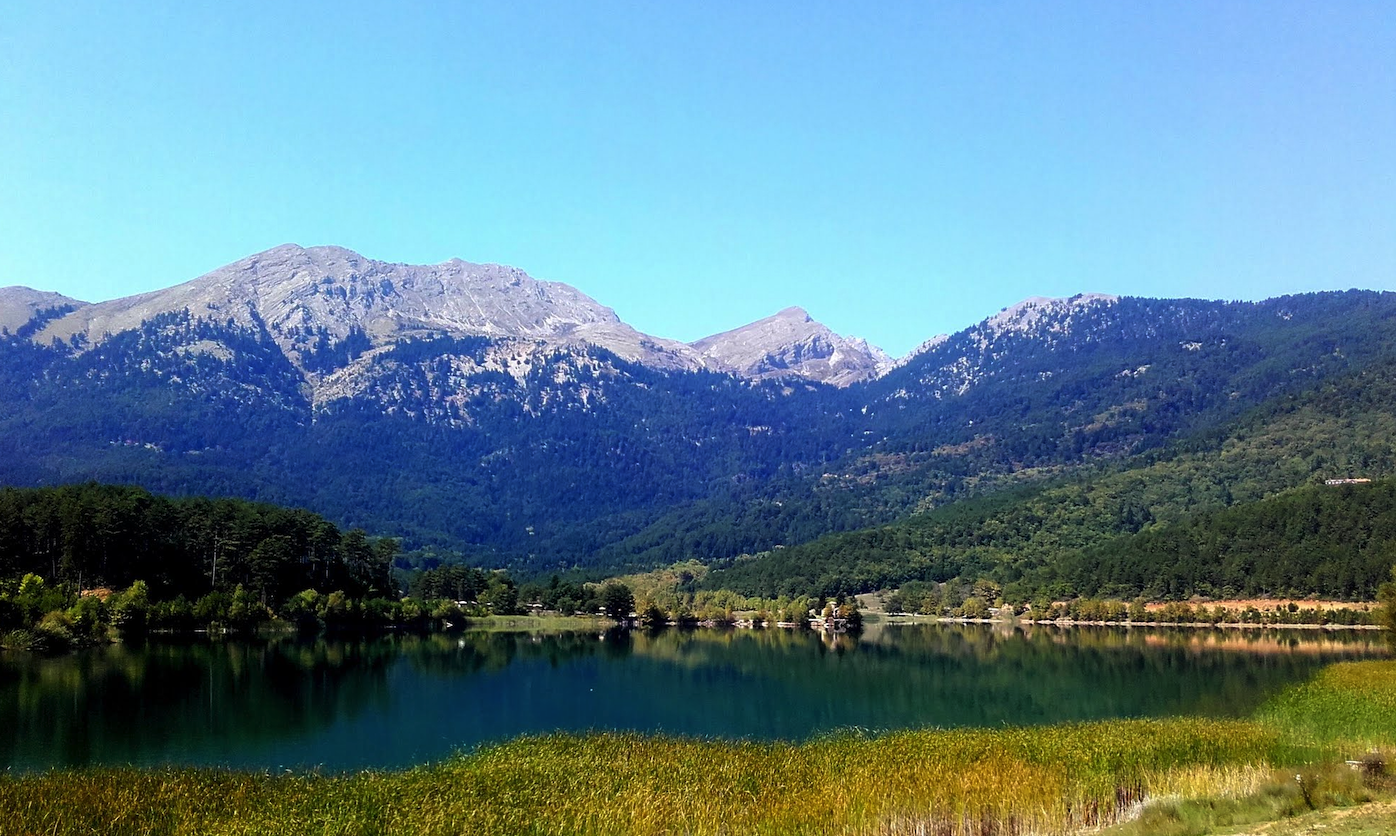 The mountainous area of Feneos spans a large plateau, crowned by dense forested mountains, bordering the west with the prefecture of Achaia and south with the prefecture of Arcadia. It includes part of Helmos, the largest part of Mount Killini (Ziria) and the former communities of Mosia, Mesinos, Mati, Ancient Feneos (Kalyvion), Gouras, Stenos, Syvistis, Panorama and Tarsus, based in Goura.

In the deserted villages of Ano and Kato Tarsos, the most important attraction is the deserted monastery of Panagia Vrachos, built in the shadow of a huge rock that brings to the visitor associations from Meteora and offers a wonderful view of Ziria, especially the winter afternoons.

From the historic St. George’s Monastery -it was built in the 14th century and during the Revolution of 21st century it functioned as the Headquarters of the Friendly Company- the road leads to Syvista, Steno and Goura. 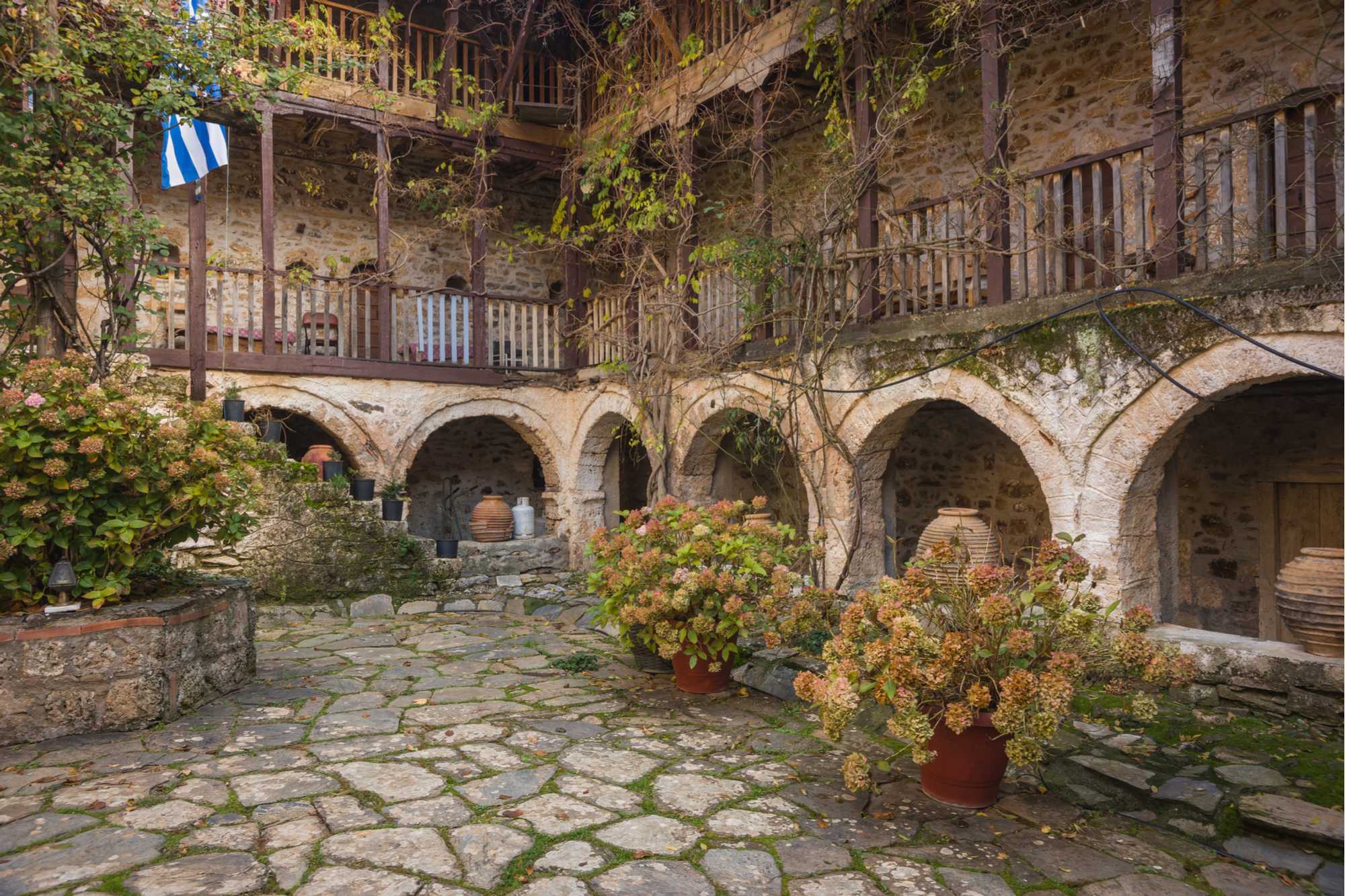 In Goura, one can admire the beautiful square with the imposing stone-built church, as well as the 19th century mansions, residences of the chieftains of the Revolution. There they will find hostels and taverns, as well as commercial shops where they can buy local meat and traditional products.

To the south of Goura is Messinos and very close to it, a little further west, there are the ruins of Ancient Feneos. In Steno, a beautiful village almost untouched by time, the visitor can make a stop to quench at the fountain of the village, which originates from the square of the square, and is an intelligent construction of the inhabitants. Following the road to the north, following the river of the river Olvius, the landscape is delightful in the fir forest.

Afterwards, Steno continues to the north following the bed of the river Olvios and the detour west to Tarsus leads to Feneos with its traditional stone houses and its Folklore Museum full of memories and traditions of the place. 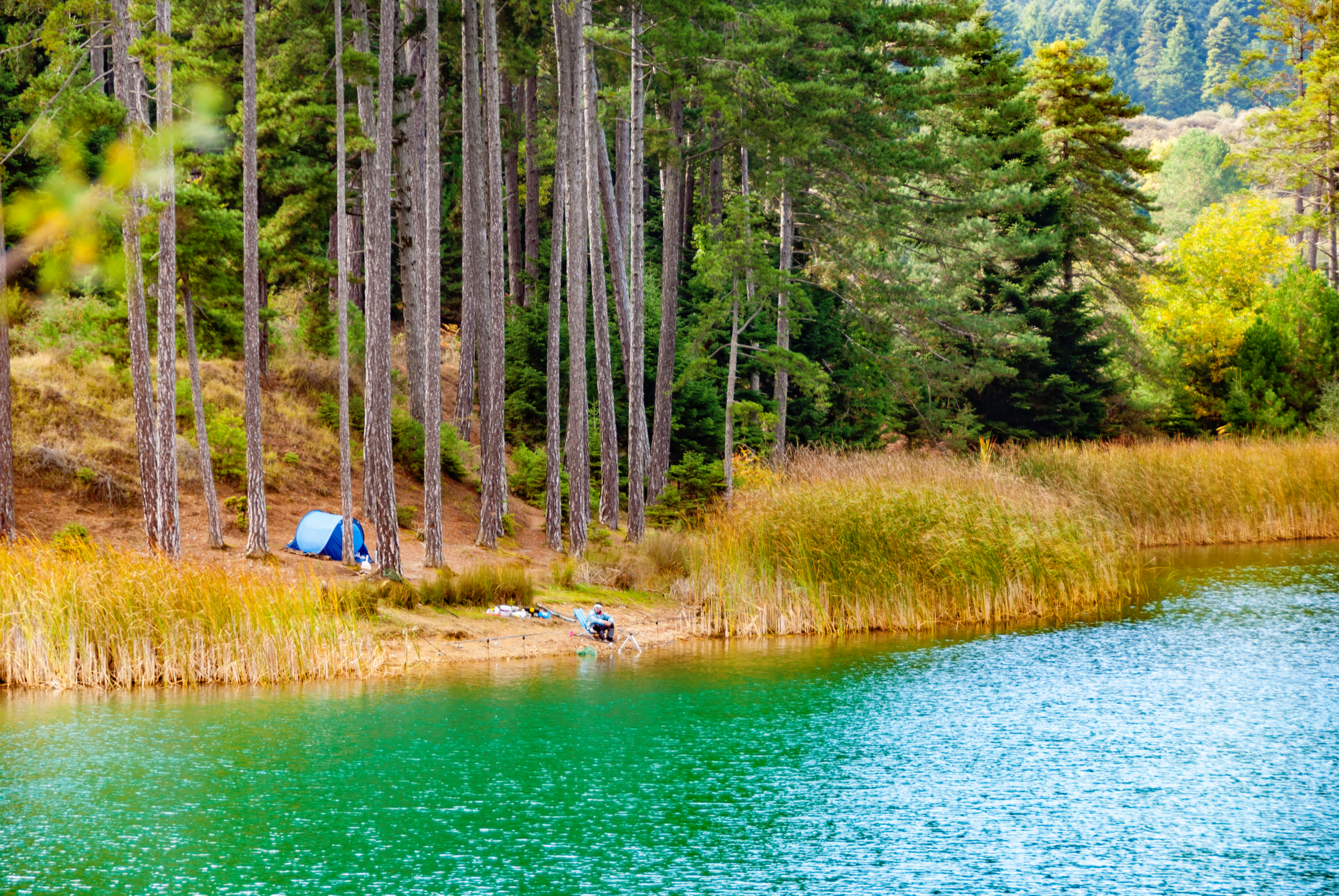 Near the Ancient Feneos, at an altitude of 1,000 meters, is located the village of Panorama, with the famous Byzantine church of Agios Dimitrios, while descending from the west side of Zireia and with spectacular views, we meet Mosia, built on a slope above the plain with amphitheater tilt and shortly after, we arrive at Mati, also known as Gioza.

A little higher than the Feneos basin, surrounded by the Aroania Mountains and the peaks of Killini, there is the blue artificial lake Doxa, at an altitude of 900 meters, at Ancient Feneos of Corinthia. Its construction was completed in the late 1990s, utilizing the glorious torrent that flows in that area. 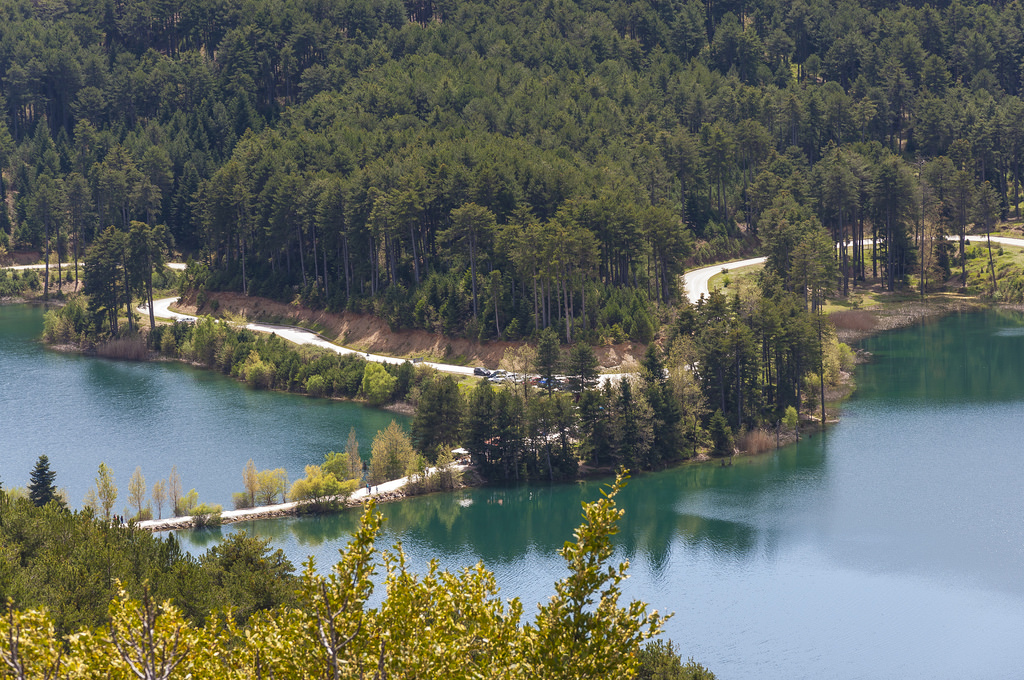 With the construction of a dam, Lake Doxa serves the irrigation needs of the region’s crops and made the area even more beautiful, giving it a significant ecological interest. Moreover, during the summer months the visitor can also enjoy swimming.

In the lake, on a narrow strip of land, there is the chapel of Agios Fanourios or Palaiomonastiro, with access from one side of the lake, while the forested monastery dominates the monastery of Feneos. The road around the lake is ideal for walks and cyclists, but also for horseriding. 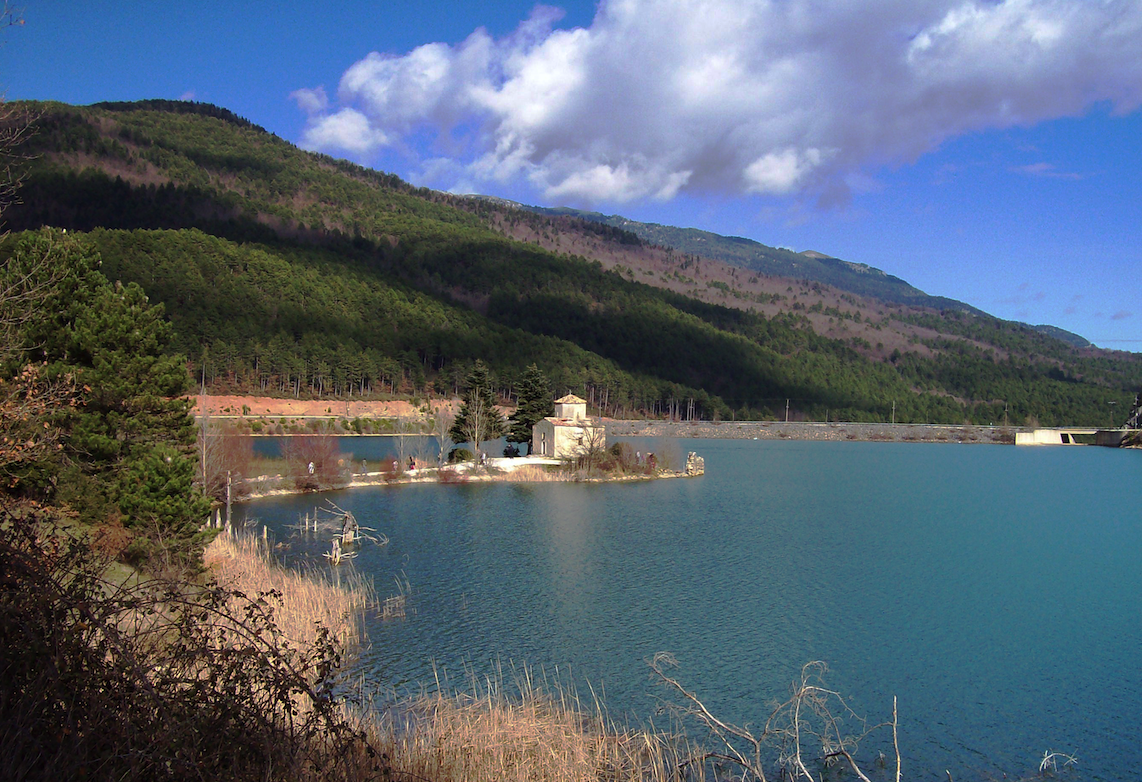 Its uniqueness is due to the large plateau located between the mountains of Ziria and Helmos as well as the 9 villages that almost circularly surround the Feneos area.

On the perimeter of the lake live free horses, some of them have been domesticated and the visitor – especially in winter – can take a ride with them. 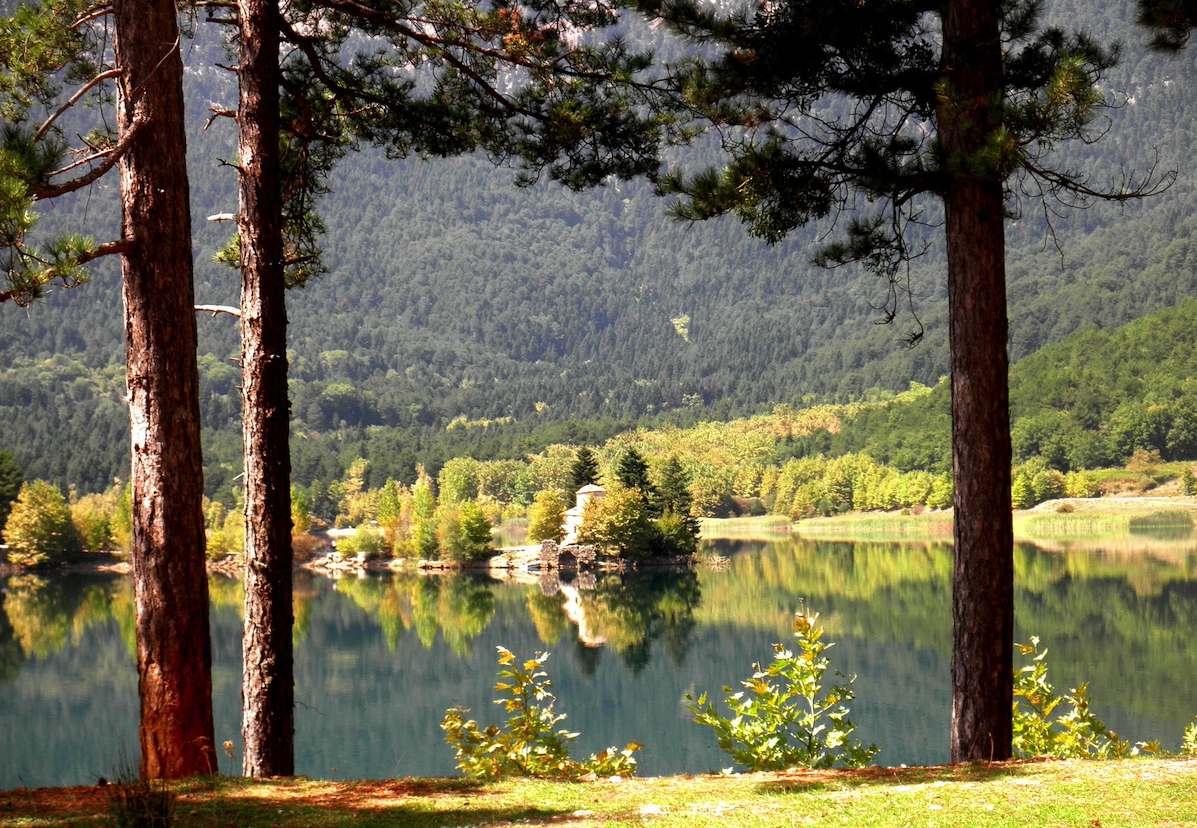 It is no coincidence that Feneos has been described as “Corinthian Switzerland” for its stunning beauty. Fir trees, pines and mountains, especially during the winter when they are snowy, give the visitor the feeling of an alpine landscape. All the features of Feneos and the surrounding area make it an excellent destination for a weekend or even a short walk away from the always busy capital city of Greece.