Valandis Giannoulas is the Instagrammer from Trikala that has magnetized the spotlight, capturing unique moments from his travels both in Greece and abroad. His photographic lens focuses on images of nature that seem to have come out of a fairytale, with the atmosphere enchanting the viewer and making him travel to a familiar and at the same time unknown world. 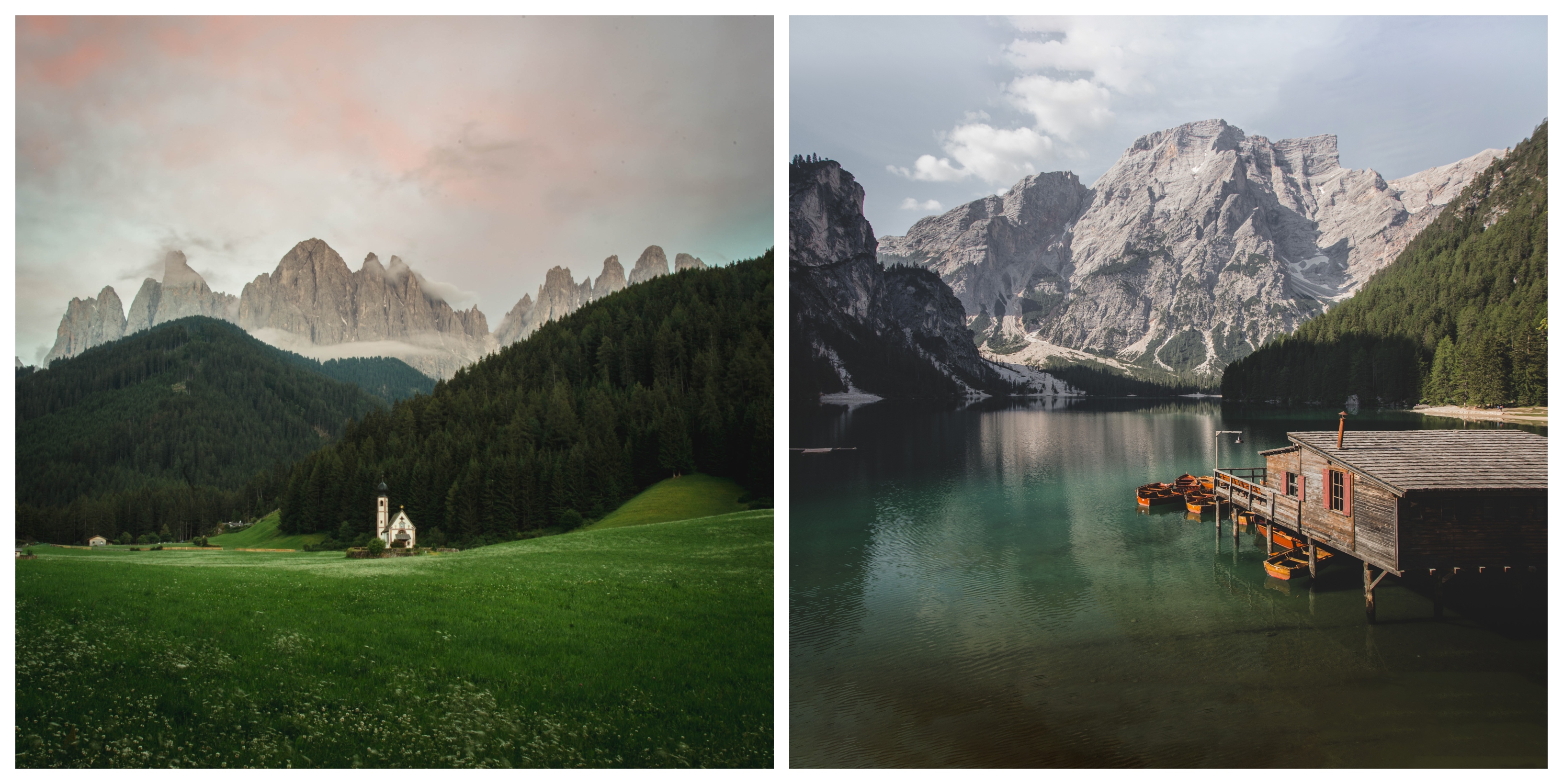 His love for Greece is evident through his works, as is the pursuit of highlighting other seasonal aspects of the country and not only showing its summer side that makes it a heavenly holiday destination. He wants to make the world know and love Greece from end to end, throughout all seasons.

Valandis Giannoulas was born and raised in Trikala, where he still lives. He has a degree in mechanical engineering and has finished the School of Pedagogical and Technological Education. The 29-year-old works as a technical vehicle inspector at MOT while occasionally photographing weddings and events, even though he has not had studies in this field. 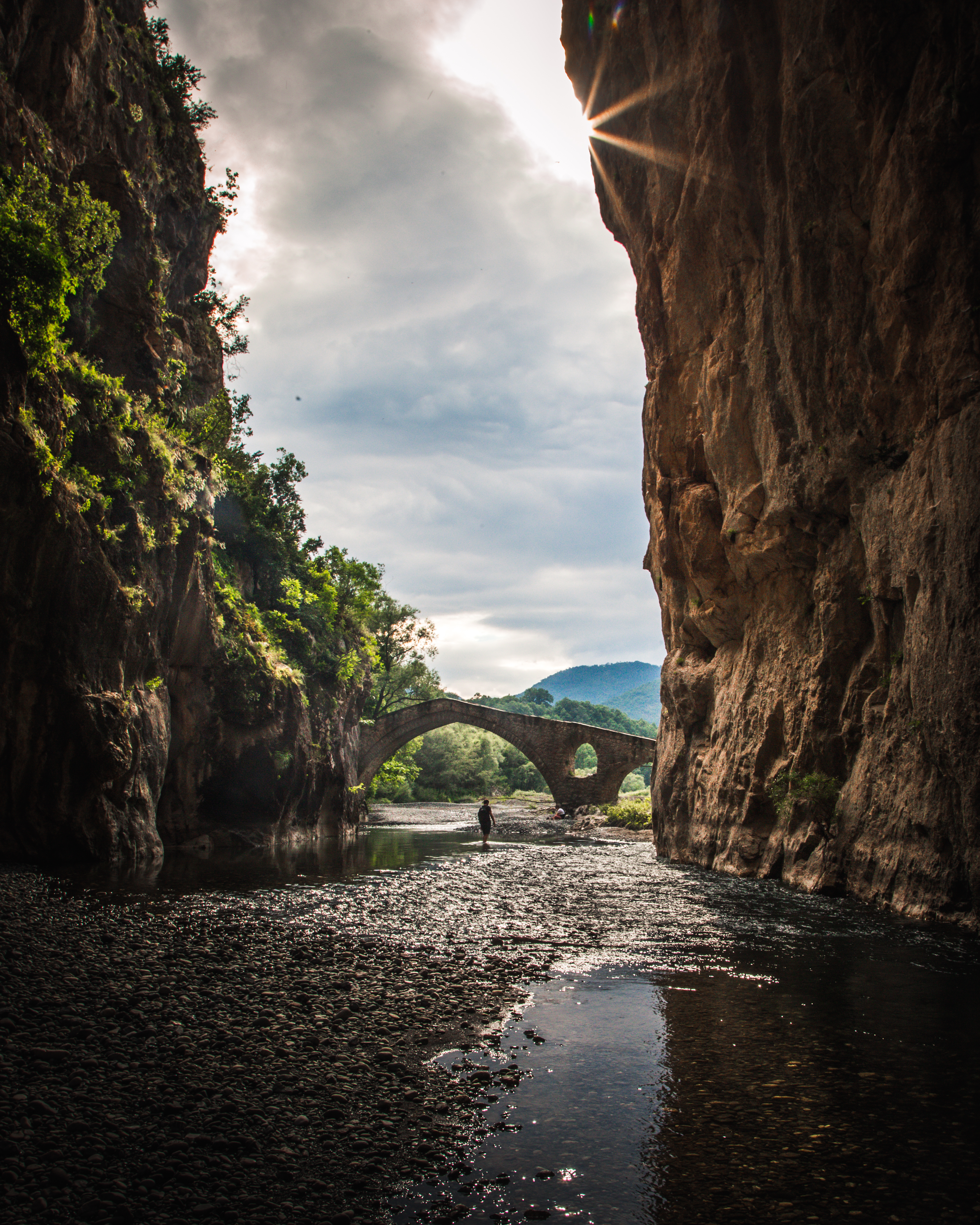 His relationship with photography was sparked by his father, John, who was the one who introduced him to the art of photography since he loved traveling on the mountain. The fact that he combined those trips with photography, however, was something that Valandis was very enthusiastic about, and what led him to start working on it himself, from the time of the camera film – and then with the first camera phones.

He realized his passion for photography about three years ago when, after a day of long and difficult mountaineering, he realized how much he liked it and wanted to continue doing it forever. Having spent his summers mainly on a mountain, he learned to love them. So he ended up combining his two loves into a hobby. 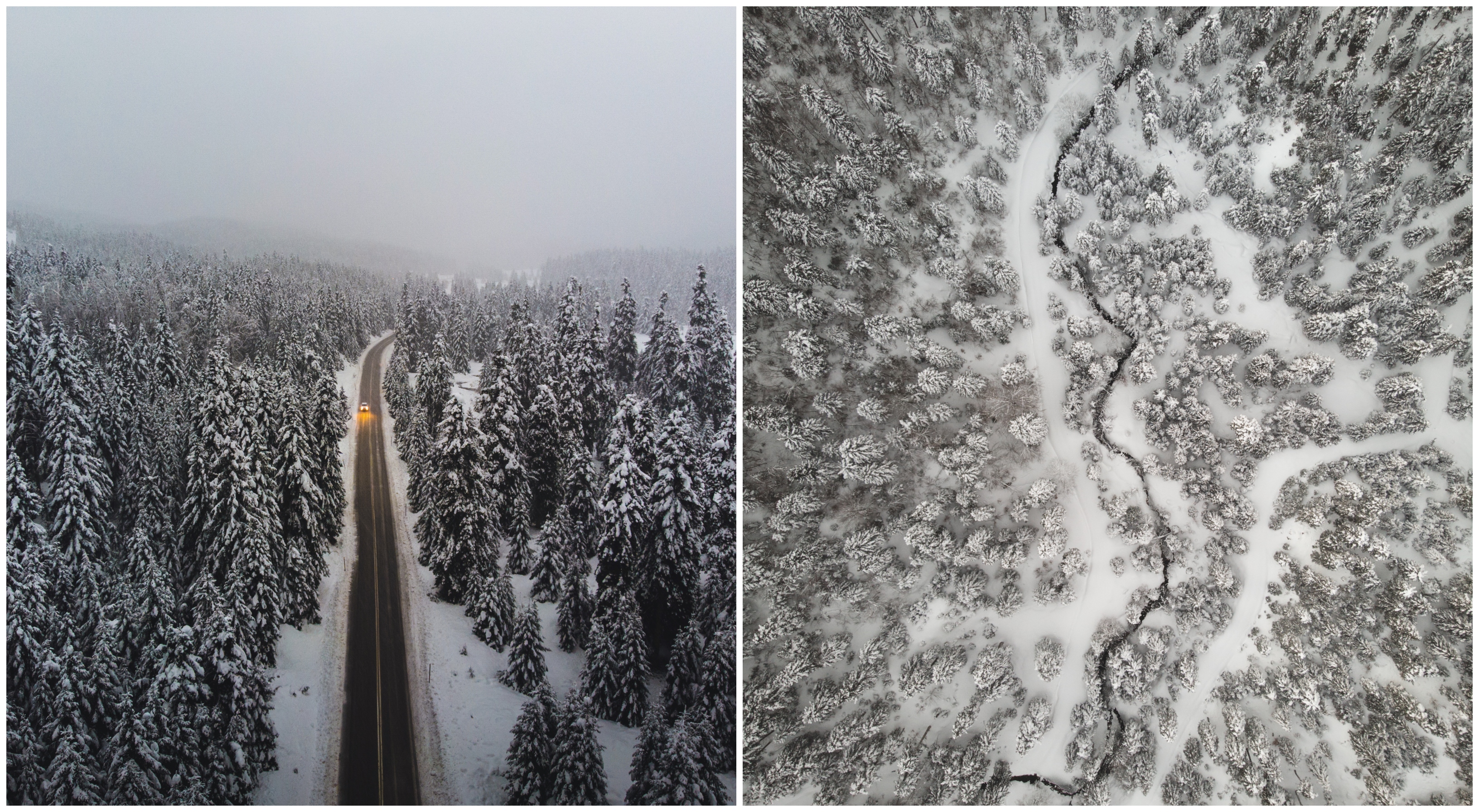 He loves traveling and, unlike many, does not travel to photograph but is involved with photography in order to travel. “The best moments of a trip cannot be captured in a photo because you just experience them,” he said in an interview with Ellines.com, “And to experience them, you have to leave the camera aside and live the moment. I would like to advise travelers to first fill their soul with images and feelings and then fill up the memory cards of the camera.”

He likes to input people in the landscape he photographs, highlighting the greatness that nature has, but also giving an adventure scent to his photos. He prefers to capture landscapes rather than faces because nature excites and moves him. Even if he has already visited a place, his feelings and his “eye” will be different whenever he will see it again. 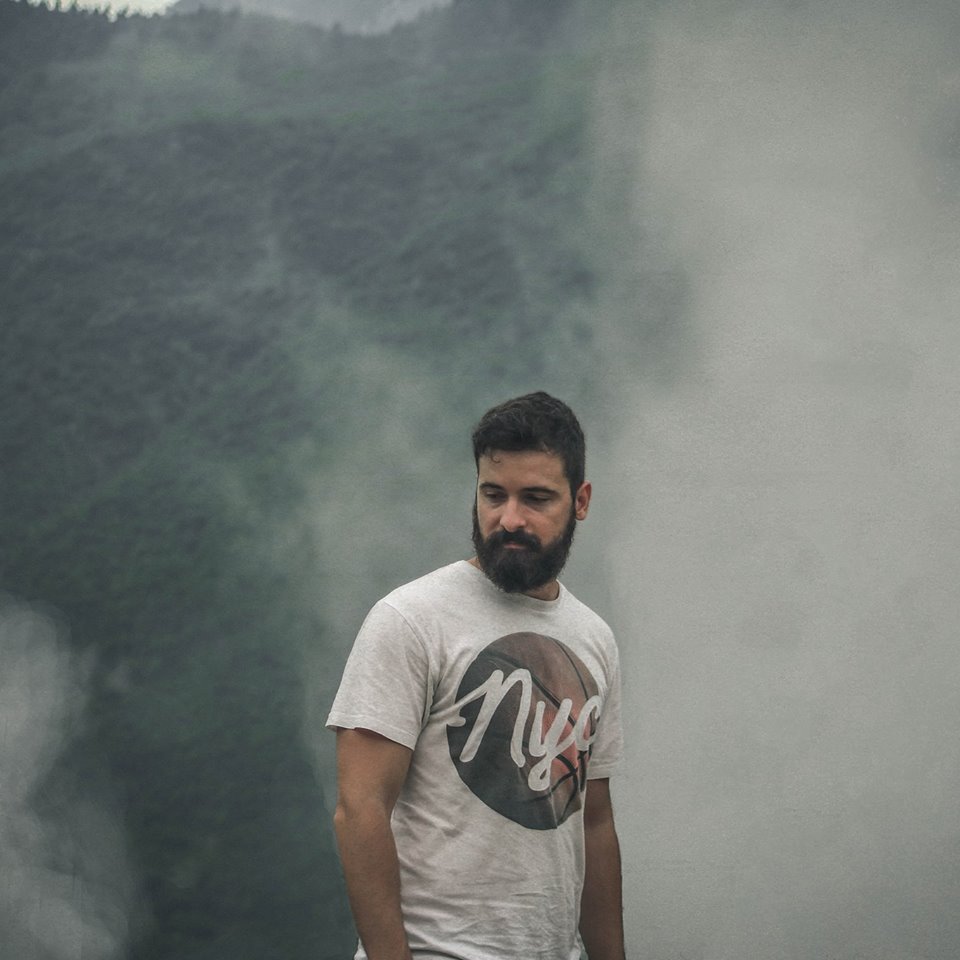 Thus, his inspiration comes mainly from travel and nature, and he thinks that there is no one who travels and is not inspired by it enough to keep his memories printed in a photo. Further inspiration for him are various photographers around the world whose work and travels give him an incentive to travel and to also try new things on photography.

Among the many photographers, the work he singles out the one of Alex Strohl, a French photographer with countless travels and incredible adventures in his assets. “The way he takes photos, knowing what he’s doing and why inspires me. The stories he tells through his photos make me want to keep going even more vigorously,” admits the Greek Instagrammer. 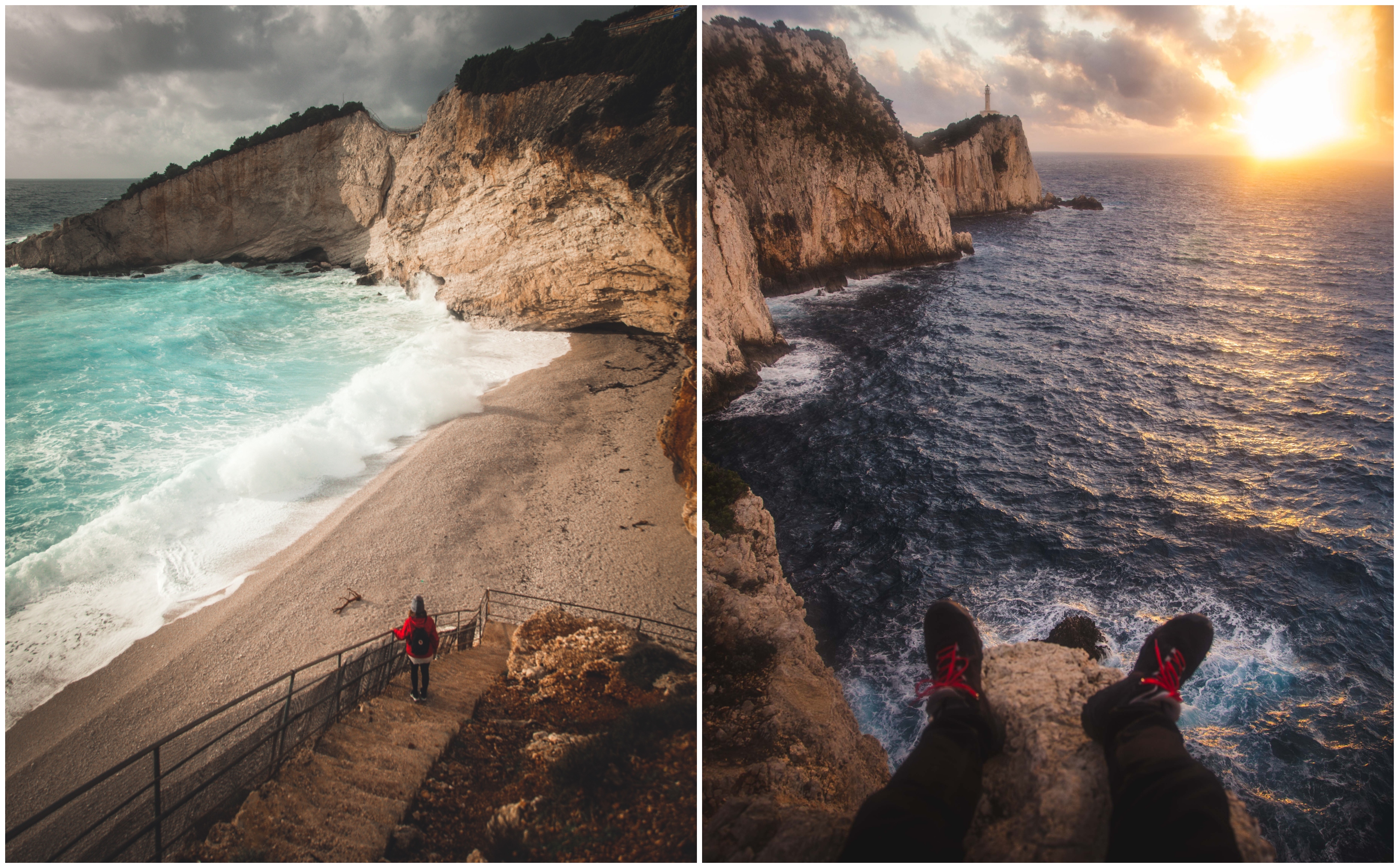 The question of whether a photographer is photographing for his audience, for himself or for both, he chooses the latter. “Everyone can shoot whatever they like and share it with their audience without being interested whether it is liked by someone else. But the positive comments will make them continue with what they do and will give them even more impetus”.

He, even though he can not fully transmit the memories and feelings he had on a trip to all those looking at his photo, knows that these memories will be revived in him every time he looks at them and that suffices. 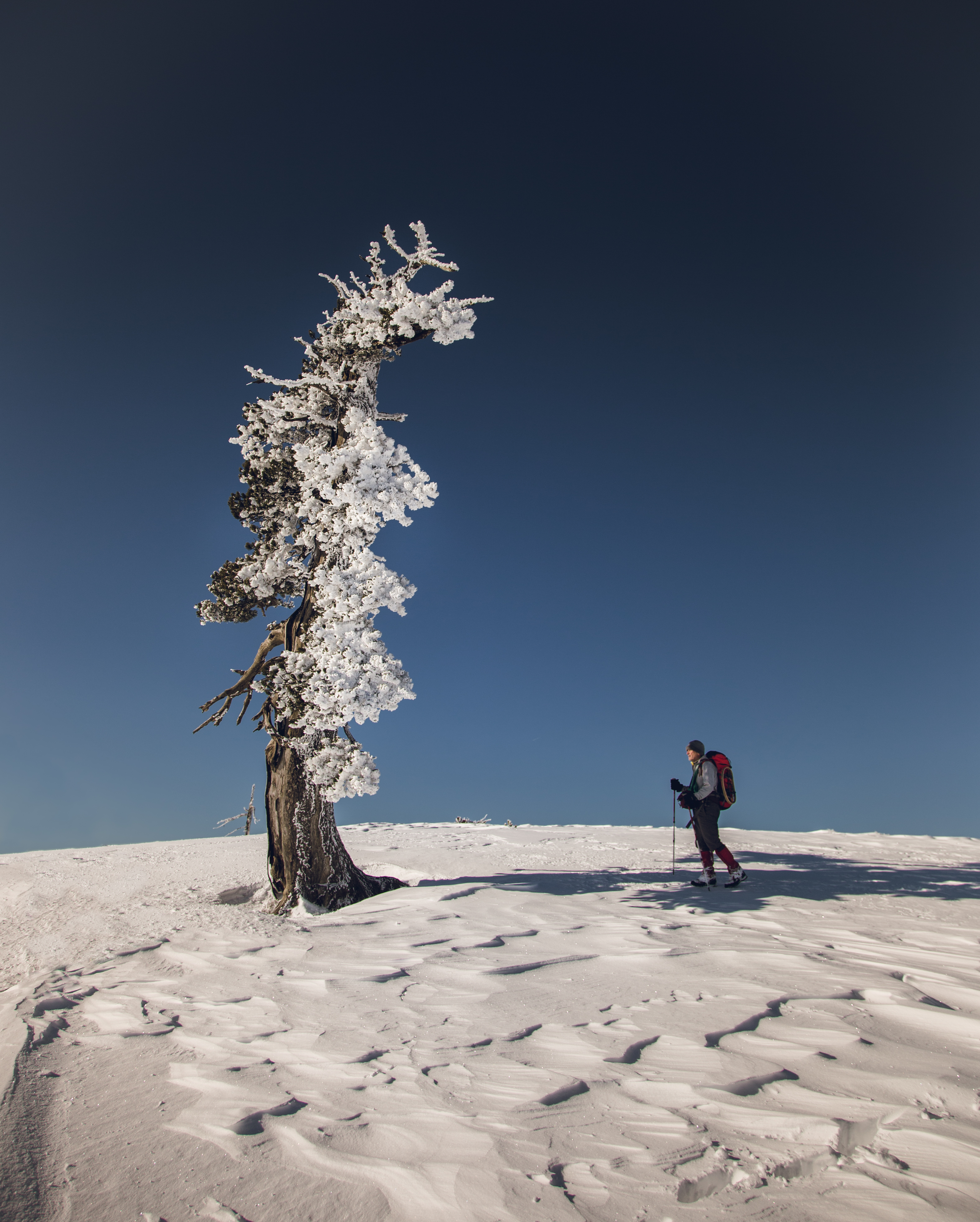 Between the digital sensor or the camera film, he uses more the first, since it has much more convenience and does not burden the photographer, as he tells us. Nevertheless, he has two quite old film-cameras, which belonged to his father, and most of the time he has one with him to take a few pictures of every trip or mountain ride. “It’s another pleasure not to see what you’ve shot at that moment and see it after it’s appeared on the film”.

Regarding a good photo, he replies that he follows some rules, that anything symmetric and balanced is more friendly to the human eye, but that the rules exist to be broken. “Even in chaos there can be a balance since photography has no limits, it is art and people can express themselves through it”. He thinks that in order for a photograph to stand out, one should be able to tell a story and to impart some feelings when viewed. 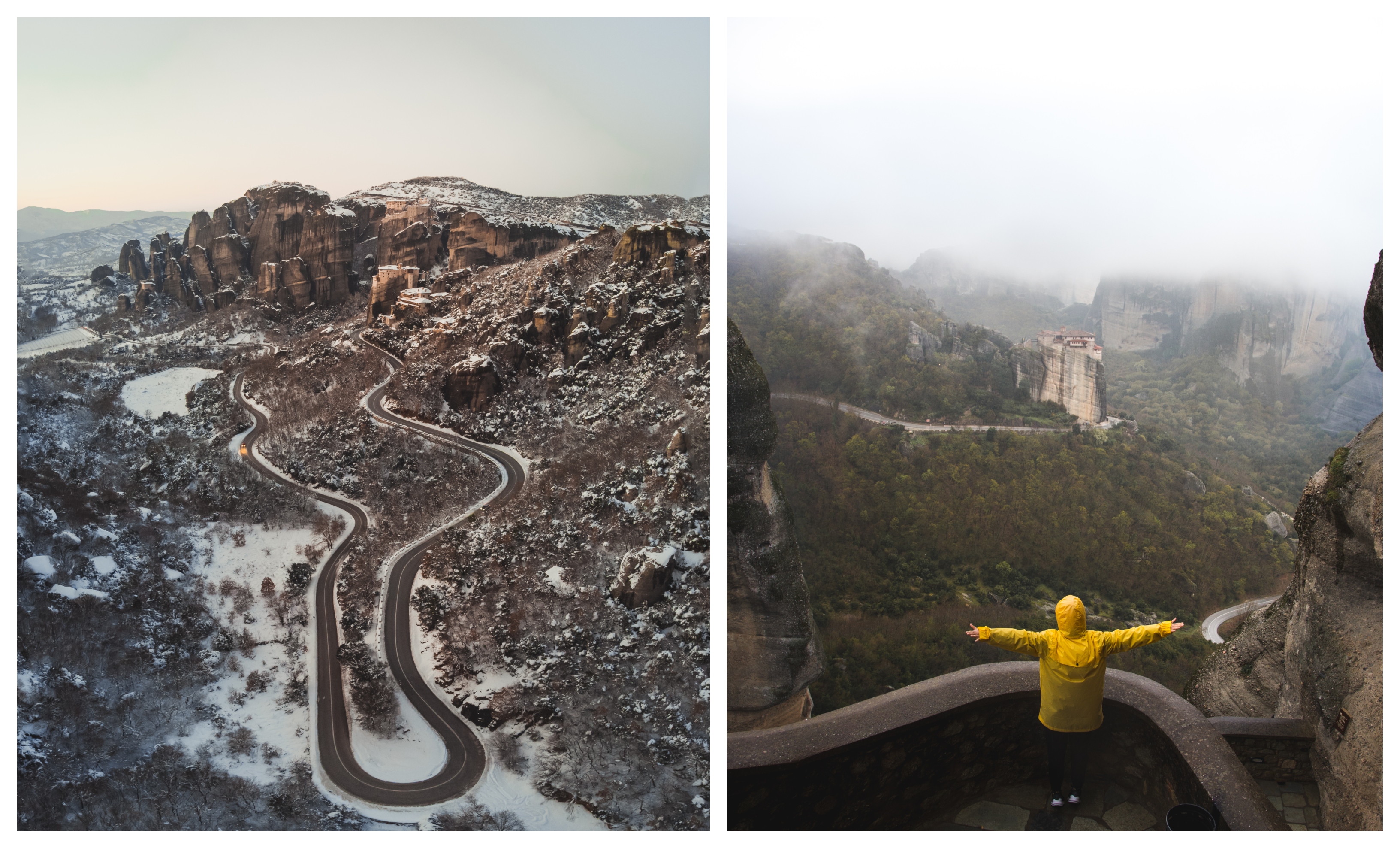 But what he really likes to do on a photographic level is to capture the landscape and everything associated with it, meaning that in order to pick up the camera and photograph a landscape, he has followed a process that even if he does not succeed with the shot he wants, his connection with nature and his feelings of the moment make him not care about a “failed” photo. Because, according to his words, even from a difficult and painful day on the mountain, the feelings are always sweet and nostalgic.

Valandis_g – his name on Instagram – shares his photos on this social media platform mainly because interaction with other users is more intense and immediate. “And second, and more important, because it is a platform that has infinite photographers and people who are actively engaged in photography, often acting as a source of inspiration for photos and trips,” he explains. His account on Instagram exceeds the 16,000 followers in 2019, while the likes in his photographs are permanently in the hundreds and thousands. 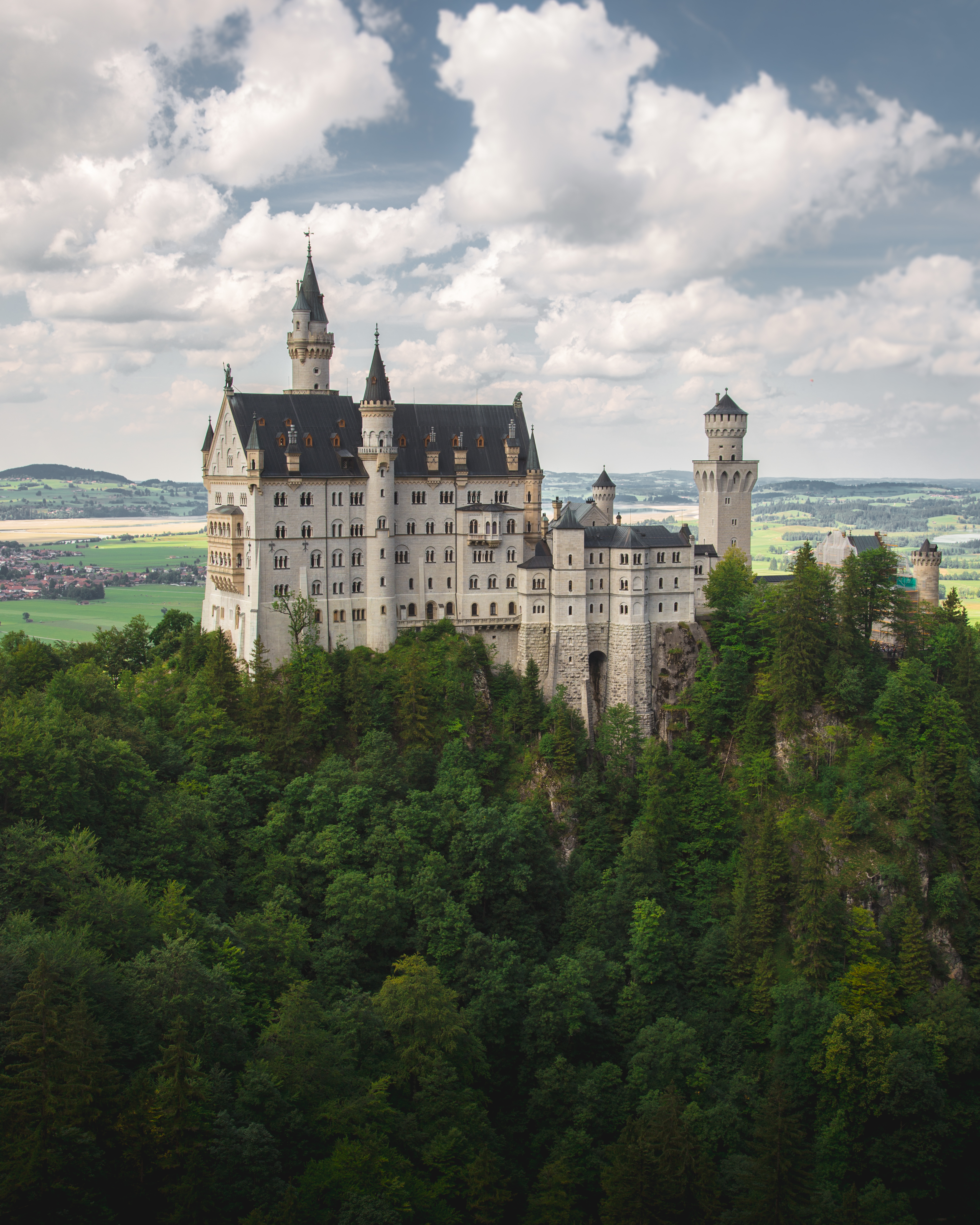 To the question of whether he could live without traveling, he said, “It may sound too much to say that one could not live without it. The sure thing is that it would not make sense to suffer the routine of everyday life if you don’t have in mind the plans and organizing of a trip. Because traveling means living. From the moment you imagine it until you realize it, it is something special for psychology and it renews you”.

One of his most unforgettable trips was the one in Austria’s Hallstatt, a small, picturesque village in a fairy-tale landscape built on the shores of the homonym lake, “which was encircled by high, green mountains with caves and waterfalls” he says. 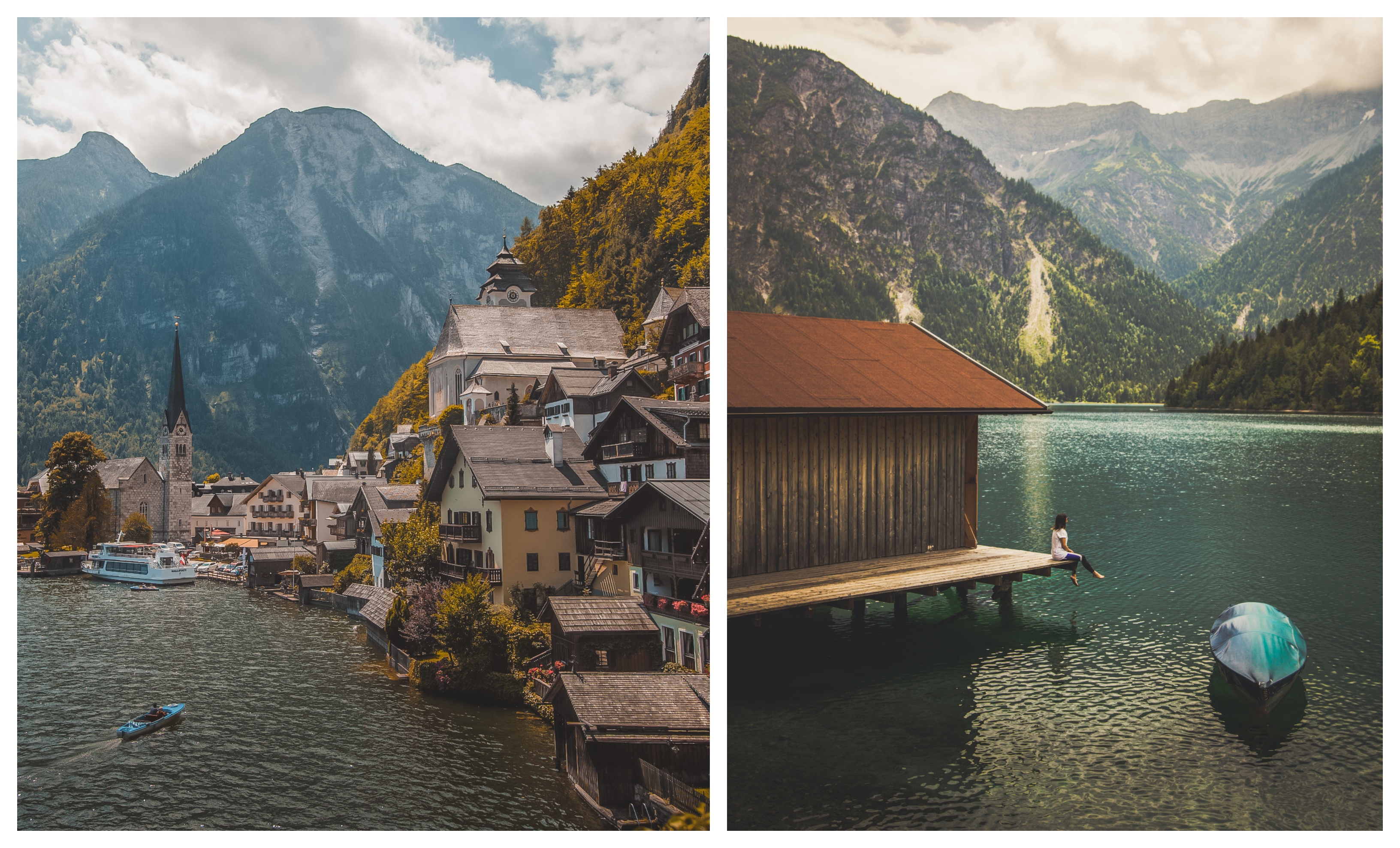 If he had to distinguish three of his photographs, he would first choose the one from a long hike in Elati, Trikala, in the forest, where he returned home completely drenched – it rained heavily – and exhausted, but having realized his love for photography and knowing that that’s what he wanted to do from there on. The second is from one dawn on Agrafa, “perhaps the most beautiful of my life, because of the colors I saw, but also because I had my father’s company” he confesses and continues, “And the third, when I photographed my brother playing with his dog, in Drakolimni, Tymfi. Whenever I look at this image, it makes me smile”. 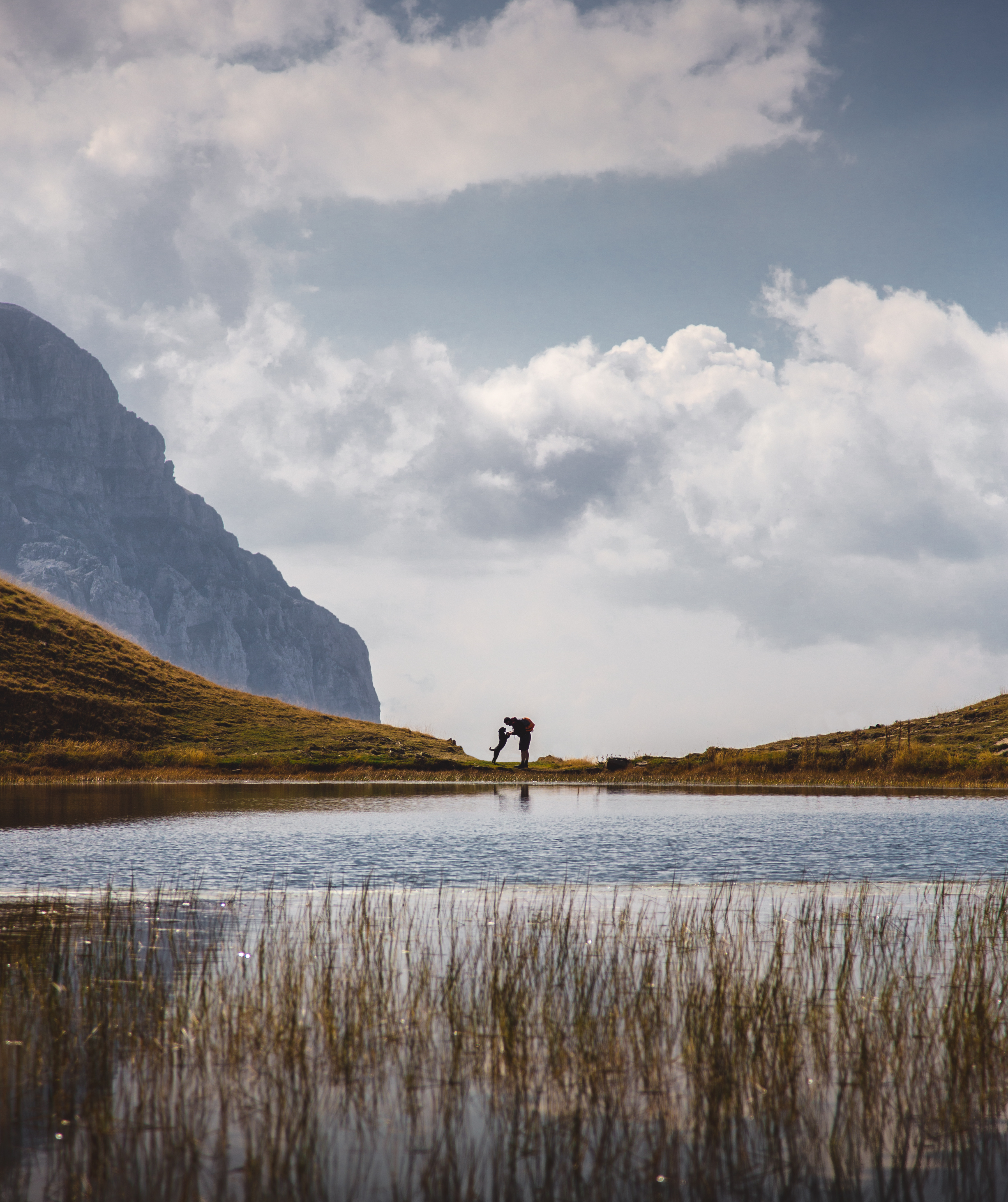 Valandis Giannoulas is a young man who has found a way to channel his two loves into a hobby and conquers the admiration of the Instagram community, presenting Greece and traveling in and out of it through his eyes and emotions. 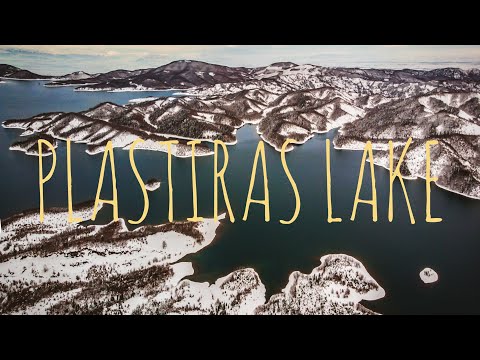