Expert in the machine perception research

Georgios Evangelopoulos is an electrical and computer engineer at MIT. His research is focusing on theoretical, computational and algorithmic frameworks at the intersection of Signal Processing and Machine Learning.

He received his diploma in Engineering from the National Technical University of Athens as well as his Ph.D. in Electrical and Computer Engineering in 2007 with the thesis: “”Visual texture and image microstructure analysis with modulation models, variational and energy-based techniques”.

He started his career as a research assistant and algorithm engineer in 2002 at the ICCS Institute (Institute of Communications and Computer Systems), a non-profit Academic Research Body. There he participated in the Greek project GSRT-PENED and the European Union research projects HIWIRE (Human Input that Works In Real Environments) and MUSCLE. He left this position in 2006.

From 2003 till 2006, G. Evangelopoulos was also working as a teaching assistant at the National Technical University of Athens. He taught the course Division of Signals, Control and Robotics and he was also programming assignments, labs, guest lectures and course material.

In February 2010, he became an Adjunct Lecturer at the School of Electrical & Computer Engineering of the National Technical University of Athens. He was the instructor and coordinator of the undergraduate course “Signals & Systems”, covering basic concepts for continuous and discrete time signals and systems.

G. Evangelopoulos in November of 2010 acquired the position of Postdoctoral Fellow at the Biometrics and Face Recognition Group, Computational Biomedicine Lab of University of Houston. His research there was focused in the research and development, coding, management, deliverables, evaluations and results of aface recognition project. He also did code prototyping, software development, system engineering, engineered and implemented methods for facial pose estimation from images and 3D data and face matching anddesigned/deployed multiple, large-scale, cluster-based (multi-node, multi-core) experiments.

From June 2013, G. Evangelopoulos is a postdoctoral fellow at the McGovern Institute of Brain Research at MIT (Poggio Lab) and the Lab for Computational and Statistical Learning (LCSL), a collaboration of the IstitutoItaliano di Tecnologia (IIT) and MIT. In MIT he is focused in unsupervised learning of invariant representations for speech recognition while in IIT he co-organized “Learning Data Representation” workshop and is currently designing and overseeing the collection of a speech dataset adapted to the iCub robot. 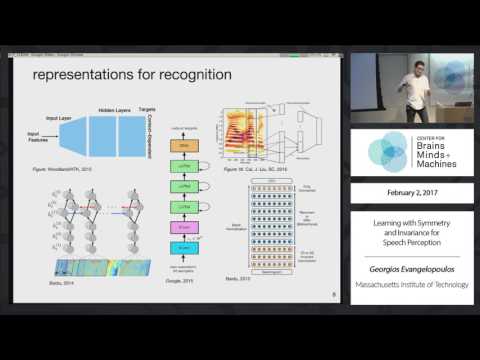