Dean Alexander Spanos is the Chairman of the Board of the San Diego Chargers, one of the NFL’s most respected franchises. Spanos has provided critical direction and resources while building a winning, family environment that has led to consistency and success.

Dean Alexander Spanos was born in Stockton, California. He earned varsity letters in football and golf at Lincoln High School in Stockton. Dean later received Lincoln High School’s Hall of Fame Award, which honors alumni whose contributions and accomplishments are representative of the school. He was recognized for his achievements in the areas of business and athletics. Spanos continued his golfing career at the University of the Pacific in Stockton, graduating in 1972 with a degree in business administration.

His wife, Susie received the prestigious Celebration of Life Award in 2011 from the American Cancer Society. She is a spokeswoman for the NFL’s cancer campaign and is a breast cancer survivor. She also was honored as a “Woman of Dedication” by the Salvation Army in 2001 and has been named the Woman of the Year by the San Diego Leukemia Society for her philanthropic work in the community.

Spanos handed over the reins of day-to-day leadership to his sons A.G. and John.  Eldest son A.G. Spanos now serves as President-Business Operations while John Spanos is President-Football Operations. Dean remains atop the organization’s hierarchy as chairman.

Spanos’ leadership is felt throughout the National Football League as well as all Spanos corporate entities. Spanos had served as president of the Chargers since early in 1994, the same year the team culminated its most memorable season in team history with an appearance in Super Bowl XXIX. In addition, he also serves as President of the A.G. Spanos Companies.  Dean and his brother, Michael, oversee all construction operations nationwide.

Spanos’ commitment to San Diego and the team is undeniable. He has dedicated 14 years and millions of dollars to develop a plan to give San Diegans a modern Super Bowl-quality stadium and secure a long-term home for their football team. The reason for this bond: Dean’s family has proudly called San Diego home for 31 years.

The Spanos family is recognized as one of pro football’s most philanthropic families and one of Southern California’s most active and caring contributors. Their financial and emotional support of youth sports and education in San Diego is unmatched.

The Chargers Community Foundation and the Spanos family have provided more than $12 million to support a wide range of services and resources for programs directly affecting youth and families in San Diego County.

Honors for their generosity come frequently to Dean and Susie. In 2014, the Spanos family received the Outstanding Community Service Award among all family-owned businesses by the San Diego Business Journal. The Make-A-Wish Foundation presented the team with its Wish-Granting Partner of the Year Award while the California State Athletic Director’s Association presented the Chargers with its President’s Merit Award, both in 2012.

In 2006 President George W. Bush appointed Spanos as a Board of Trustees member of the John F. Kennedy Center for the Performing Arts. 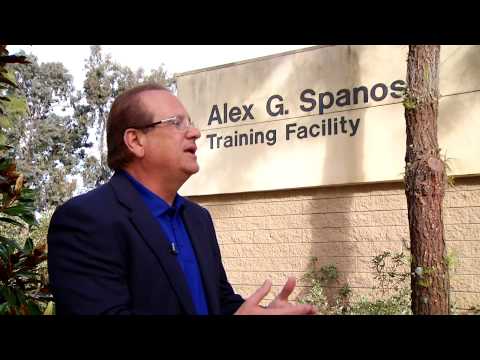