The famous “Starburns” in the tv series “Community”

Konstantinos “Dino” Stamatopoulos  is a Greek- American television comedy writer, actor and producer who worked on TV programs such as Mr. Show, TV Funhouse, Mad TV, The Dana Carvey Show, Late Show with David Letterman and Late Night with Conan O’Brien. He has also created multiple animated TV shows such as Moral Orel, Mary Shelley’s Frankenhole, and High School USA!. As an actor, Stamatopoulos is best known for his recurring role as the character Alex “Star-Burns” Osbourne on the NBC comedy series Community, and he also works behind the scenes as a producer and consulting writer.

All of his family comes from Greece. His father was born near the village of Kalavryta in Peloponnese and his mother’s parents came from the island of Kefalonia. He had the chance to visit Greece and his relatives there when his father passed away. In fact, he describes the whole process as a process of redemption.

Dino was born in Chicago and started working in the industry in 1992. While at Ridgewood High School, he wrote for his school variety show and was astounded he could get laughs with the material he had written. He attended Columbia College in Chicago “and not Columbia University”, as he says. He had written a spec script for a Simpsons episode, just out of love for the show, and Andy convinced him to submit it to The Ben Stiller Show, which got him hired. He met and worked with Bob Odenkirk. After Stiller’s show was canceled, he moved to New York and joined the writing staff of Late Night with Conan O’Brien, also with Odenkirk. During the ’90s he wrote for Late Show with David Letterman, The Dana Carvey Show and Mr. Show with Bob and David.

In 2010, Stamatopoulos began his new stop motion series Mary Shelley’s Frankenhole, but he is mostly famous for appearing as “Star-Burns” on the NBC comedy series Community from season one in 2009 until his character’s death was announced in season three. However, in the season finale, his character was revealed to have faked his death, although he did not return until season five. He was also a consulting producer and writer on the show and co-wrote the stop motion animation Christmas episode which aired on December 9, 2010, which he produced with the help of his company, “Starburns Industries” (link: http://www.starburnsindustries.com/) , an innovative and imaginative full-service production company, specializing in stop-motion, traditional 2D, and CG animation.

As Dino says: “I’m not an actor, I don’t enjoy waiting around for hours on set, I hate when people touch my eyes and neck (make-up department!), I can’t learn lines quickly (yes, even the amount of lines I get), and I don’t need other actors (Joel McHale) asking me why I never got my teeth fixed”. 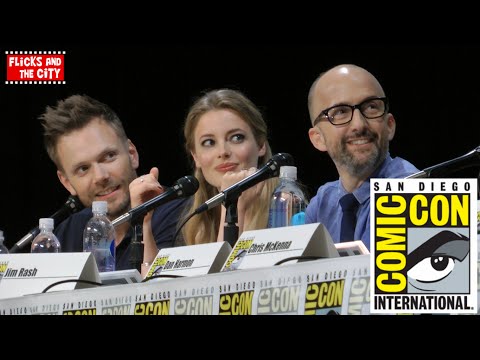