The master of satire

David Sedaris is a comedian, an author and a radio contributor, the great skill with which he slices through cultural euphemisms and political correctness proves that Sedaris is a master of satire.

Sedaris was born on 26 December 1956 in New York. His father is of Greek descent, while his mother is Anglo-American and he is the second child of six. He graduated from the School of the Art Institute of Chicago in 1987.

He is also the author of the NYT-bestselling collection of fables entitled “Squirrel Seeks Chipmunk: A Modest Bestiary”.  He was also the editor of “Children Playing Before a Statue of Hercules: An Anthology of Outstanding Stories”.  Sedaris’s pieces appear regularly in The New Yorker and have twice been included in “The Best American Essays.”  There are a total of ten million copies of his books in print and they have been translated into 25 languages.

He and his sister, Amy Sedaris, have collaborated under the name “The Talent Family” and have written half-a-dozen plays, which have been produced at La Mama, Lincoln Center, and The Drama Department in New York City.

These plays include “Stump the Host”, “Stitches”, “One Woman Shoe”, which received an Obie Award, “Incident at Cobbler’s Knob” and “The Book of Liz”, which was published in book form by Dramatists Play Service.

His original radio pieces can often be heard on public radio’s This American Life. 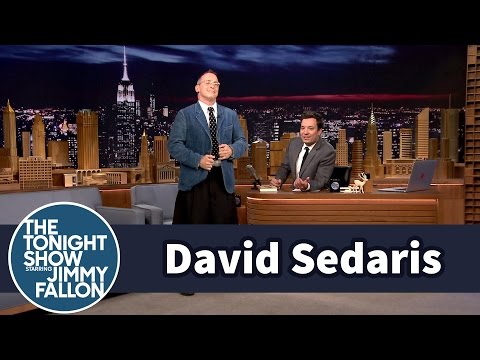