Dimitris Mitropoulos was born in Athens on February 18, 1896 (by the old Julian calendar) and was from the village of Melissopetrain Gortynia. He was the son of the merchant, John Mitropoulos and Angelica Anagnostopoulou, a housewife, and although he grew up in a middle-class family, he received a good education (foreign languages, music) thanks to his open-minded and ambitious mother. Although three of his ancestors (his grandfather’s brothers from his father’s generation) followed the priesthood, no one was professionally involved with music.

He graduated from the Varvakio Gymnasium of Athens, being a mediocre student of 5.5, and enrolled in the Athens Conservatory in 1910, where he studied the piano with the German pianist and teacher, Ludwig Wassenhoven, and Upper Theoretical with the Belgian composer, violinist and orchestra conductor, Armand Marsick (1877-1959). He received a piano diploma in 1919, with an outstanding unanimity and an awarding distinction for his outstanding performance. He continued his studies as a scholar at the Athens Conservatory in Brussels (1920-21), where he took private synthesis lessons from Paul Gilson and instrument ones by Alphonse Desmet. 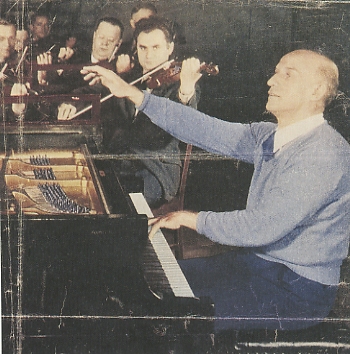 From 1921 to 1924, he worked as a music instructor and assistant to Erich Kleiber at the State Opera in Berlin, Unter den Linden. In Berlin, he met Ferruccio Busoni, from whom he was deeply influenced as far as both his aesthetics and his professional career as a musician are concerned. He may have been in the Italian-born composer, pianist and aesthetician’ social “circle” but he had not been his pupil in the strict sense.

By the end of the 1920s, he quit composing and dedicated himself exclusively to the orchestra conducting. His work includes 48 titles (one for orchestra, chamber music, piano, choir, singing, singing and piano, one opera, etc), and five transcripts (three for a big orchestra and one for violin and piano by JS Bach, Camille Saint-Saens and Henry Purcell) and four adaptations for string orchestras (quartets by Ludwig van Beethoven, César Franck and Edvard Grieg). 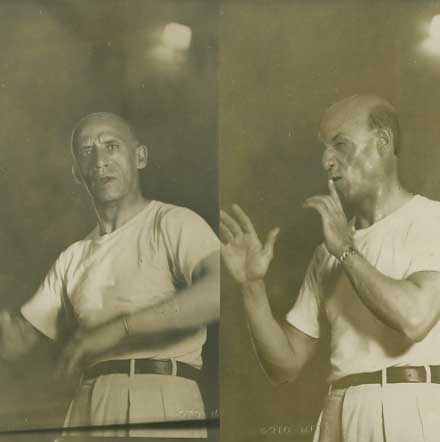 Compared to the discography of the well-known maestros of his era, his discography was rather poor. He did not consider his original work to be the sound recording made by means of sound machines and techniques. Instead, he devoted a lot of time to an “extra-musical” occupation, making speeches at universities and lectures in public places.

Dimitris Mitropoulos began his career as a conductor in Athens, where he directed successively the Symphony Orchestra of the Greek Conservatoire (1924-25), the Symphony Orchestra of the Concert Club (1925-27) and the Athens Conservatoire Symphony Orchestra (1927-1937 ). In 1930, he made his first appearance abroad, with the triple acting of the conductor, the pianist (he directed the Third Concerto of Sergei Prokofiev playing the piano part himself), and the composer (with the work of Concerto grosso for orchestra), while being a guest of the Berlin Philharmonic Orchestra. 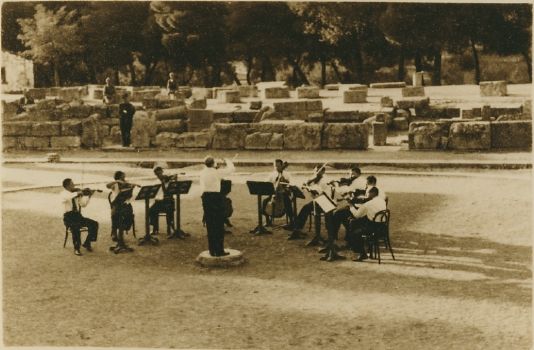 In 1936, he first went to the USA, where he directed the Boston Symphony Orchestra, while a guest of the permanent director of Serge Koussevitzky. He returned to the orchestra the following year, as well as the Minneapolis Symphony Orchestra (SOM), from which he served as permanent conductor, from 1938 to 1949. From the season 1944-45 until the end of the 1947-48 season, he also held the position of the conductor and Artistic Director of the Robin Hood Dell Music Organization. 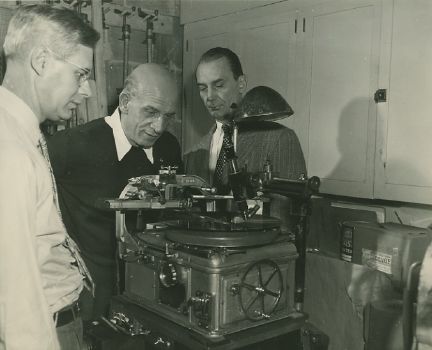 In 1949, he became co-director, with Leopold Stokowski, of the New York Philharmonic, and since 1951, the “Philharmonic” appointed him conductor and Artistic Director, which he was until 1957. In 1951, the Philharmonic New York made its first post-war appearance in Europe (Edinburgh Festival) led by D. Mitropoulos and Bruno Walter. The former conducted the “Philharmonic”, in March 1954, (along with Guido Cantelli) in 15 US cities in April and May 1955 (again with Cantelli) on the tour “From Coast to Coast”. In the summer of 1955, (along with Guido Cantelli and Georg Szell on the European tour in October and Athens) and finally in the summer of 1958 (with Leonard Bernstein) on a tour in Latin America.

Mitropoulos made his debut as a conductor of a theatrical performance in 1950, as part of the 13th Musical May of Florence, where he directed the Electra of R. Strauss. In June 1952, he first appeared at the Theater of Milan in Scala, where he directed the “first” – for this theater – Wozzeck opera by Alban Berg. On the 1954-55 season, he started performances at the Metropolitan Opera House in New York, and after the end of the 1957-58 season, he participated in its summer tour in US cities. 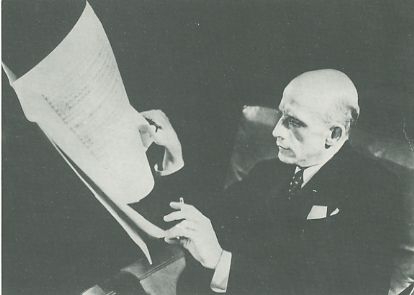 Since 1950, every year, the great musician used to travel to Europe and participate as the head of the orchestra or as a guest conductor at the Salzburg Festival, the Athens Festival, the Venice Contemporary Music Festival, the May Festival of Florence, Lucerne International Music Weeks and others. He directed opera performances in the Vienna State Opera and other theaters and he gave symphony concerts with orchestras, such as the Scala Theater Orchestra, the Vienna Philharmonic Orchestra, the Amsterdam Concertgebouw Orchestra, the Bavarian Radio Orchestra, etc

His repertoire included works of the Preclassical and Classical era, the era of Romanticism and Contemporary Music of his time. In the double role of the orchestra director-pianist, he appeared on numerous occasions by interpreting (in addition to Prokofiev’s third Concerto) Cesar Franck’s Symphonic Variations, Johannes Brahms’s Second Concerto, Darius Milhaud’s Studies, and many others. 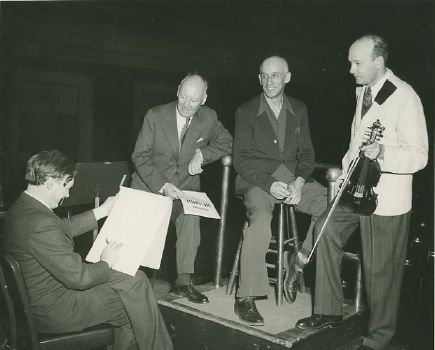 In addition, he was the first Greek composer to abandon the “functional” tonal system and proceeded to atonality (10 Inventions for voice and the piano) and the application to the Ostinata in tre parti, for the violin and piano, Schönberg’s dodecaphony. It belongs, internationally, to the first composers who made the decisive step in conquering dodecaphony.

Moreover, he developed a completely personal technique, which visualized music, replenished the inadequacy of the notation and responded to the specific requirements of works of different styles, that was perceived by the musicians of all the orchestras, who were carried away into overcoming their real potential; often, critics attributed the performing impeccable technical performances to “miracles”. 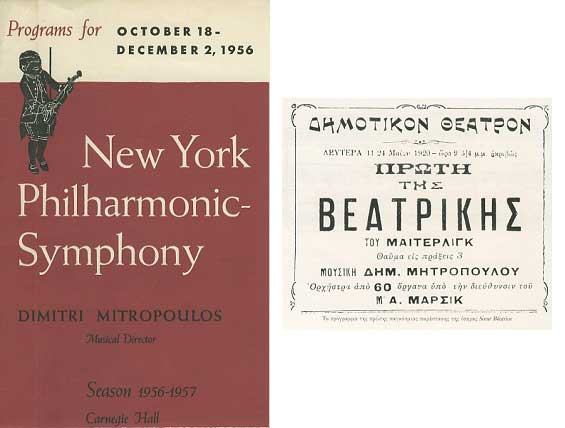 He was a skilled pianist and also one of the few who had the ability to play piano concerts while conducting the orchestra at the same time. It seems that Dimitris Mitropoulos had been the only musician in history who had been able to play and simultaneously conducted such difficult and complicated concerts, like the 2nd Bram, contemporary concerts by Respighi, Malipiero, Russell, Krenek, etc and, in particular, Prokofiev’s 3rd Piano Concerto (with this work he often appeared as a soloist and conductor throughout the world and it supported the creation of his international career).

He was completely devoted to music and worked exhaustively, with a tireless passion, often living lonely and in a simple manner. As he himself had said, his life and personality were influenced by Saint Francis of Assisi, his “saint”. He had been so generous and supported materially and morally many people including musicians of his orchestras. He was, however, criticized, once with deliberate exaggeration, for his tolerance of the inherent phenomena of contumacy presented to the New York Philharmonic.

Mitropoulos did not only express himself through the language of music but also in his profound and original speech. His writings (letters, articles, lectures, interviews, etc.) are mortgages for the people of music, in general, for the people of the Arts and Letters. 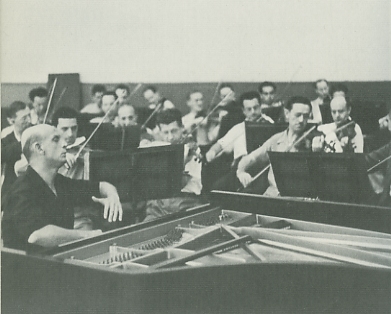 He was also admired for the power and originality of his interpretations, while his managerial technique, mainly without the use of baguette, was absolutely personal and imaginative, with an expressive gesture. He was famous for his unique memory – he had always conducted his vast repertoire without the score, even at rehearsals.

The uniqueness of the great Greek artist is completed through the “human dimension”. He had once said, “I am a man who seeks love; and my art is still used for this purpose. My artistic life was successful because it always expressed my need for communication and love between me and my audience.” Consistent with this purpose, he walked throughout his life “with stripping discipline, doubts and humility” – as he had written to his friend Giorgos Seferis – giving the aesthetic content of his art a purely humanistic dimension. 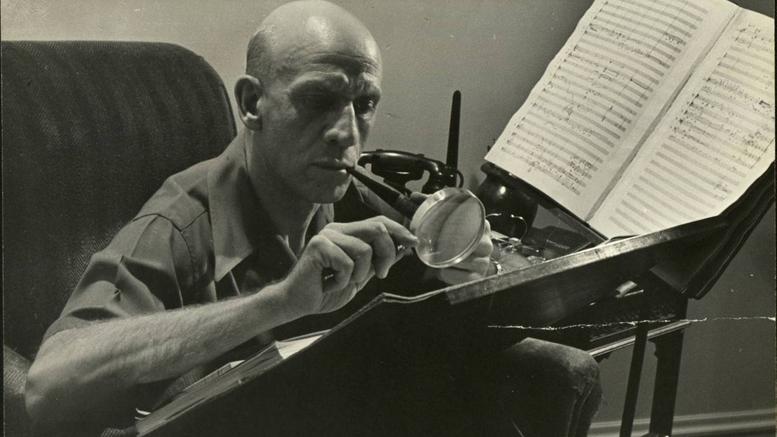 Before his death, two heart attacks had taken place (at the end of 1952 the first, the beginning of 1959 the second), and on 2 November 1960 Dimitris Mitropoulos suffered the fatal heart attack on the podium of Scala, during the rehearsal of the Third Agreement by Gustav Mahler. His body, according to his written expressed desire, was incinerated. On 6 November, his ash was transferred to Athens, where the local authorities and the people bade farewell to the great maestro at a funeral ceremony that took place in the afternoon of the same day at the theater of Herodes Atticus. On July 19, 1961, the ash was deposited at a tomb of the First Cemetery of Athens, granted by the City of Athens. The epitaph monument was painted by sculptor Yiannis Pappas.

Dimitris Mitropoulos was a multifaceted talent, an anxious artistic personality, with a keen desire for knowledge and an imperative need for expression and communication. Ηe passionately approached music and served it as a performer, as a teacher and creator. 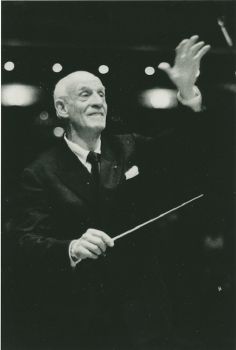 – Prosecutor Member of the Academy of Athens (1933)

– Silver Cross of the Order of the Savior

– Honorary Diploma of the MusicAssociation of New York (1953)

– Metal of the Friends of Music Association, Athens (1955)

– Honorary Diploma of the National Council of Music / UNESCO, USA (1957)

– Accademico onorario of the National Academy of Ag. Cecilia of Rome (1958)

– Honorary Company of the Academy of Athens (1959) 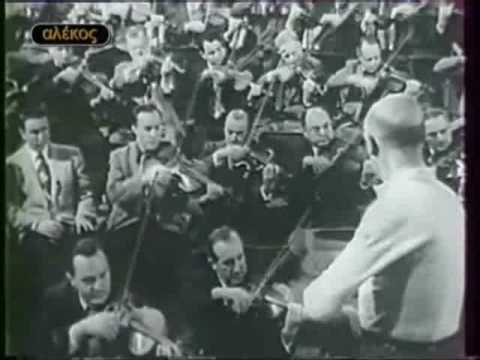