One of the greatest painters of all time

Domenikos Theotokopoulos, well known as El Greco was one of the greatest painters. El Greco’s paintings adorn the largest museums and private collections. In Greece there are six paintings of Theotokopoulos: “St Luke Painting the Virgin and Child” and “The Adoration of the Magi” (Benaki Museum), “The Coronation of the Virgin” and “Angelic Concert” (National Gallery), “The Baptism of Christ” and “Mount Sinai” (Historical Museum of Crete).

He was born in 1541 in the village of Candia, which was at that time part of the Republic of Venice, present day Heraklion in Crete. El Greco was descended from a prosperous urban family. His father, Georgios Theotokopoulos was a merchant and tax collector. El Greco had an older brother Manoussos.

From a young age he studied ancient Greek and classical literature and he received his initial training as an icon painter in Crete.

In 1567, he left Candia and went to Venice, where he became a disciple of the great painter Titian, and he became familiar with the Venetian Renaissance style.

From 1570 and until 1577 El Greco was in Rome. He was hosted at the palace of Cardinal Alessandro Farnese. In 1572, he joined the Guild of Saint Luke.

In 1577, El Greco left for Spain, where many Italian artists had moved there in order to participate in the decoration of El Escorial palace. However, King Philip II of Spain was not satisfied from El Greco’s “bizarre” artwork.

He was settled in Toledo, the old imperial capital of Spain and also the religious capital of the country. There, the proud Cretan undertook large orders and painted many of his marvellous artworks such as “El Espolio”, “The Burial of the Count of Orgaz” etc.

In 1578, his son Jorge Manuel was born. Theotokopoulos never married the mother of his child Jeronima de las Cuevas.

El Greco died on 7 April 1614 in Toledo and he never returned back to his homeland. He always signed his paintings in Greek using Byzantine characters. 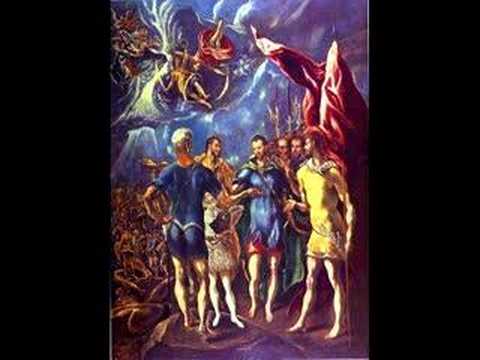 «My whole soul is a cry, and all my work a comment on this cry. I yell to the memory to remember, i gather from the air my life, i stand as soldier and make my report to Greco, because he is fermented by the same Cretan soil as I and better than all the fighters who live or have lived may he feel me.»

Odisseas Elitis "The Journal of the unseen April"

«Where I climbed the narrow, damp alley – almost three hundred years ago- I felt snapped «by the hand: of the Powerful Friend, and really, until i recovered, I watched me raising by El Greco’s two giant wings, high on his skies, this time filled with orange trees and waters of the motherland»