A graduate student at the University of Thrace has transcribed a poem by Nobel-prize-winning poet Odysseas Elytis into Braille, as part of a greater project to release to the public a free software programme anyone can use to transcribe text from Greek or English into Braille.

Apostolos Garoufos is from Tsotili in the area of Kozani, where he first studied Greek literature. He is now studying programming and communication technology for special education, and wants to help out people with visual impairments whom he loves, he says in an interview with the Athens-Macedonian News Agency (ANA). In an attempt to understand how the blind manage their daily lives, he spent 24 hours with a blindfold. “Time passed relatively easily, as I could use Braille to use the television and the computer, but I couldn’t do something which was of vital importance to me, to read literature by myself,” he says, explaining the path he decided to take.

His love for literature, the focus of his first university degree, led him to experiment with ways a book of literature could be turned into a Braille text. Odysseas Elytis‘ poem “Monogramma” was his first attempt at the software. “My idea to learn Braille came after I started my graduate degree in special education,” he tells. “As I learned the language in depth – not just the Greek and English you are taught in, but all other languages (except those with special characters like the Chinese) – I wanted to feel the power of this computer code.”

Explaining the current situation in publications for blind people, the philologist-programmer said that production of transcriptions and printings of books in Braille are assumed by various associations. The problem, he says, is that it’s hard to find books online, unless one requests a special order. This is doubly true for magazine articles. “Education is the most important thing in this life. You open your wings, you rejoice in the love and smell of the actual pages of books. There should be a significant initiative and push to publish books for such people.”

Something he said inspired him to take the path he is on now. Essentially, I wanted to have an online programme that would be able to automatically transcribe texts from Greek or English, to start with, in order to get Braille texts as an initial step. The second phase is printing this,” Garoufos says. “With the programme I’ve created, you don’t need to know anything about transcriptions or Braille, it does it automatically. You just type in regular text and it automatically transcribes it.” 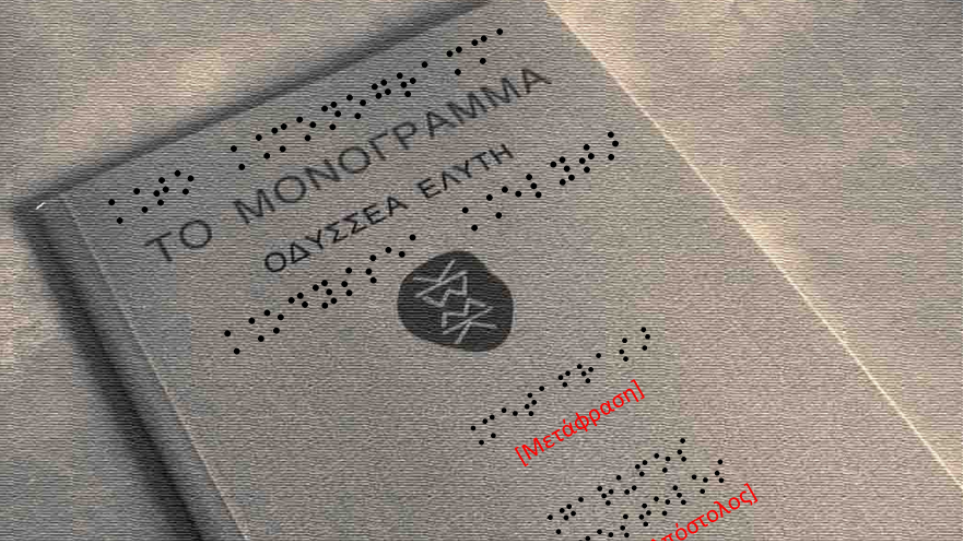 On his Facebook page, found under “MinaDot”, Garoufos has uploaded transcriptions he has done of several texts for adults and children, including Saint-Exupery’s Petit Prince (Greek edition). Garoufos is offering his services online to whoever wants a book or a fairy tale transcribed for them. Soon, however, the software will be uploaded onto the internet, so everyone can access free transcription. “The MinaDot application is software I created with my professor, Telemachus Goudas,” he says. “It is a computer programme doing automated transcriptions. You input the Greek or English text and it gives you the transcription (in Braille). Easy, plain, and without having to know Braille. It can make thousands of transcriptions in seconds. So far I’m the only one using it because it needs a lot of tweaks to become easier to use,” but it is in working order now, he says.