With the highly honorable presence of the President of the Republic Prokopis Pavlopoulos and the screening of scenes from Yannis Smaragdis’ new film KAZANTZAKIS, the crown of events for the great Cretan writer was completed. The event was organised by the General Secretariat for Greeks Abroad of the Ministry of Foreign Affairs, on the occasion of the completion of 60 years since the death of the great writer and the proclamation of 2017 as the year of Nikos Kazantzakis.

In the crowded summer cinema of Archanes, in Heraklion, the “making of” and some scenes of the long awaited KAZANTZAKIS movie by Yannis Smaragdis were screened for the first time nationwide. Before the screening of the film, the director gave a greeting to the attendee and thanked the President of the Republic for his honorary presence in the viewing of extracts of his new film.

The director said: “The film for Nikos Kazantzakis was a debt for me, just like the EL GRECO movie! As a Cretan, I bring and baptize all my films here in my beloved Crete before they are screened in the rest of Greece. I did the same with Cavafy, El Greco, God Loves Caviar and now with Kazantzakis “.

A part of the making of was screened and the scenes of Stathis Psaltis were shown, causing deep emotions to the crowd. The teaser and three completed sections of the film were also presented.

At the end of his short speech, the director addressed the Deputy Foreign Minister Terence Quiq and the Deputy Director for Greeks Abroad, Dimitris Plevrakis, and promised that “after the film premieres in the cinemas, he would hand over the film KAZANTZAKIS to the Ministry and to the General Secretariat for Greeks Abroad for purposes of cultural diplomacy of the Ministry of Foreign Affairs and of our country”.

The screening was attended by the Archbishop of Crete Irineos, the Regional Governor of Crete Stavros Arnaoutakis, the Mayor Manolis Kokosalis, the producer of the film and the wife of the director Eleni Smaragdis, Loudovikos of Anogia who also participated in the film and many others.

The event was also attended by Niki Stavrou, the intellectual beneficiary of Nikos Kazantzakis’ work and Kazantzakis Publications Director, who offered books by the ecumenical author to the Greek participants in the “Traces of Kazantzakis” program, which was organized by the Foreign Ministry and the General Secretariat for Greeks Abroad. She expressed her admiration and deep emotion for the scenes that were shown, stating that the work performed by Yannis Smaragdis is the biggest bridge of Hellenism’s culture with the whole of the world.

Due to the high attendance, after the first screening followed a second. 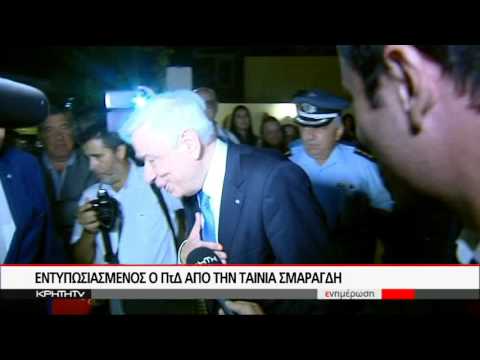