The exhibition “world of emotions” in the Acropolis Museum

The exhibition which moved and charmed the public and critics alike in the US, where it was staged at the Onassis Cultural Center, New York, has now come to Greece! On the initiative of the Onassis Foundation and in collaboration with the Acropolis Museum, the unseen world of emotions in the personal, social and political life of antiquity is brought into the light in Greece’s premier museum.

Menelaus has resolved to kill his wife in punishment for her treason. But when he finds himself face to face with her beauty once again, he throws down his sword and runs to take her in his arms. Physical beauty has the power to neutralize his anger and stir his passion. When Ajax takes on Achilles in a board game, he gets angry when he has to stare defeat in the face yet again. Annoyed, he gestures to his opponent as though trying to reason with him. But he is doomed to live his life in the shadow of his extraordinary friend—in everything from epic battles to board games. But it isn’t only the leading men of the ancient myths who have emotional tales to tell. Mere mortals do, too, like the man who mourns his beloved pig when it meets a tragic end beneath the wheels of his master’s chariot. A funerary stele depicting the four-wheeled chariot running the animal over is how the grief-stricken man chose to honour its memory.

Love, desire, lust, hatred, sadness, anger. The “εmotions” exhibition puts us in touch with emotions in Greek antiquity and illustrates the important role they can play in fostering our understanding of ancient Greek art, literature, history, politics, society and religion. The exhibition also shows us how emotions were experienced, expressed and elicited, controlled or given free rein, guided or evaluated.
All in all, 129 masterpieces from the world’s finest museums shed light on the unseen world of emotions in ancient art through an exhibition jointly staged by Greece’s top museum, the Acropolis Museum, and the Onassis Foundation, which has been actively contributing to the spheres of Culture and Education for 42 years.

Details of the exhibition, which was first staged at the Onassis Cultural Center in New York, were presented today, Monday July 17th, at a press conference in the Acropolis Museum auditorium.

The host of the event, and its first speaker, was the president of the Acropolis Museum, Mr Dimitrios Pandermalis, who personally took charge of re-displaying the exhibition in Athens: “The exhibition on the ‘world of emotions’ in Greek antiquity is laid out in a similar way to the exhibition that preceded it at the Onassis Cultural Center in New York. However, while the sequence and arrangement of the artifacts remains more or less unchanged, the display is different. In Athens, a huge spiral of vertical vinyl banners in various shades of red (from light red to the deepest crimson) guide visitors through the exhibition while simultaneously symbolizing the range and intensity of the emotions on display. The spiral joins the two main exhibits: the glorious light-bathed statues of Eros and Pothos and, opposite them, the dimly-lit wall painting depicting the sacrifice of Iphigenia, its dark niche accentuating the powerful emotions of guilt, despair and anticipation. The remaining 126 exhibits are displayed between the red spiral and a grey backdrop, whose colour serves to balance the intensity of the red, and which corresponds symbolically to the rational side of the soul”.

The exhibition is divided into five main sections: The first is entitled “The Art of Emotions—Emotions in Art”. The second section, “The Spaces of Emotions” is divided into five sub-sections: “Private space”, “The Battlefield”, “Public space”, “Sacred spaces” and “The place of Death”. The remaining three sections are as follows: “Conflicting Emotions”, “Uncontrolled Emotions” and “Medea”. The exhibition also includes 11 videos which accompany exhibits and use text and images to narrate the complex, dramatic myths depicted on the pottery and help fill in the background for visitors.

“To view the exhibition is to embark on a tumultuous voyage into the soul of Man, whose passions are here expressed through the filter of ancient art. Many of the exhibits are unique art-works which are on display in Greece for the first time. Many more from Greek museums are basking in the light of international interest for the first time”, Mr Pandermalis notes, bringing his short address to an end with thanks to key contributors: “It was with great joy that the Acropolis Museum accepted the Onassis Foundation’s proposal three months ago to bring to Athens the “εmotions” exhibition, which was then underway in New York. There was very little time to prepare, but the incredible charm of the exhibits swept aside any reservation. Our collaboration with the Onassis Foundation has been exemplary and productive. For that, my heart-felt thanks go out to the President of the Foundation, Mr Antonis Papadimitriou, and his team in Athens and New York. My cordial thanks, too, to the Hellenic Ministry of Culture and Sports and its Minister, Ms Lydia Koniordou, for approving the exhibition so quickly; to the directors of the museums in Greece and abroad who responded with such alacrity to our loan requests; and, of course, to the three curators of the exhibition, Professor Angelos Chaniotis, Nikos Kaltsas, honorary director of the National Archaeological Museum, and Professor Ioannis Mylonopoulos.

In turn, the President of the Onassis Foundation, Mr Antonis Papadimitriou, expressed his joy at seeing the outstanding exhibition transferred to Greece so successfully: “When the exhibition embarked on its journey last March at the Onassis Cultural Center in New York, we were very proud indeed, as it would help open Greek culture up to the world. All of us at the Onassis Foundation today should feel every bit as proud today, given how the exhibition has managed to cross borders and make it to Athens. And this next stop on its journey will also shine the spotlight internationally on Greece and Greek civilization, which is a goal espoused by the Acropolis Museum, too, which recently celebrated its eighth year in operation under the guidance of its president, Professor Dimitrios Pandermalis, who is also a true friend of the Foundation. The goal of the exhibition is to help us empathize with the ancient world through the historical research, which no longer seeks to extract from the past ready-made teachings for the present, but strives instead to bear the visitor into the past and expose them to the ideas that were prevalent in given eras.

The exhibition’s three curators, Messrs Angelos Chaniotis, Professor of Ancient History and Classics in the Institute for Advanced Study at Princeton and a member of the Board of the Onassis Foundation’s affiliate organization in the US; Nikolaos Kaltsas, honorary director of the National Archaeological Museum; and Ioannis Mylonopoulos, associate professor of Ancient Greek Art and Archaeology at Columbia University, were also present at the press conference.

Angelos Chaniotis: “In every culture, people create literature and art to express or stimulate emotions. Still, the ancient Greeks had a unique relationship with the world of sentiment. They deified emotions, like Eros [Passion], Pothos [Lust] and Phobos [Fear]. Still more importantly, they created literature, myths and art which constitute the first explorations in Western civilization into the texture of emotions and the consequences of failing to keep them under control. This exhibition explains in a visitor-friendly manner the crucial role emotions can play in understanding of history, art, literature and religion in ancient Greece. Our exhibits portray gods, heroes and mortals, men and women, adults and children whose faces—whether happy or angry, envious or sad—are always profoundly human and hence ever-significant”.

Nikos Kaltsas: “Our choice of artefacts for the exhibition wasn’t restricted a priori by any prejudice or taboo. Every emotion, from the most elevated and positive to the humble and negative are presented honestly, without beautification or idealization, to the degree that this was possible with the material available from museums in Greek and around the world. The mythic figures, gods and heroes wrought in man’s image, convey or elicit emotions from the polished surfaces of the red- and black-figure pottery and breathe life into the dazzling whiteness of Greek marble statuary. And while, with the exception of the imposing Attic funerary monuments, the artefacts depicting the world of mortal men are humbler, they are still awash with emotions – even the lead tablets with the curses of the misjudged, however small and lowly they may be in terms of their material and technique. Museologically, we have grouped the exhibits and illustrative material in a way which draws the visitor deep into the emotional world of antiquity and reveals it to them in a surprising way”.

Ioannis Mylonopoulos: “There are a great many aspects of ancient Greek art which make it unique among the artistic manifestations of important Mediterranean civilizations. But it is the emphasis on conveying emotions which, though it has still to be studied in depth, truly turns Greek art into the forerunner of Western artistic endeavours. As early as the 6th century BC, vase painters like Exekias were not concerned simply with depicting the acts of mythic heroes and gods as narratives. Like the painter of Penthesileia in the 5th century, sculptors like Skopas in the 4th century and the creators of the celebrated Pergamon frieze in the 2nd century, they sought to humanize their subjects by portraying their inner worlds using purely visual means. Medea’s ecstatic revenge, Achilles’ rage, Zeus’ erotic excitement and the Satyr’s sexual aggression all captured the imagination of ancient Greek artists, who rendered them initially with the help of gestures and later with—often exaggerated—facial expressions. And yet the true genius of ancient Greek art and its interest in portraying emotions lies in its inclusion of the human element. For ancient Greek artists took the love of a nameless mother for her child, a father’s unbounded grief at the death of his son, a child’s joy as he plays in the street or a victorious athlete’s pride just as seriously as the equally complex emotional world of gods and heroes, and rendered both with the same care and attention”.

Finally, the Minister for Culture and Sports, Ms Lydia Koniordou, who could not attend the press conference due to prior commitments, conveyed her own message on the exhibition: “The Ministry of Culture has contributed to the “εmotions” exhibition with works from 20 Greek museums. Visitors will be able to admire statues and reliefs of unique beauty which capture the emotions of their subjects in their bodily and facial expressions. From the enigmatic Kore loaned by the Acropolis Museum to the head of a smiling boy from the Vrauron Museum. From the Kouros of Ptoon on loan from the National Archaeological Museum in Athens to the depiction of an embracing couple from the Delos Museum… When I behold these treasures and the way they capture emotion through the dialogue between body and material, as a contemporary ‘visitor’ I cannot help but feel the hands which lent form to a chunk of marble or a handful of clay and sense the emotions released by the artist’s fevered efforts to transform and transcend matter. Greece’s cultural heritage is a priceless gift which contemporary Greek citizens are privileged and obliged to discover, preserve, conserve and share with the world, for it is part of the foundations of our shared global heritage. I would like to congratulate the Onassis Foundation and everyone who worked to bring to life this exceptional exhibition which started its journey in New York and is now hosted at the Acropolis Museum”. 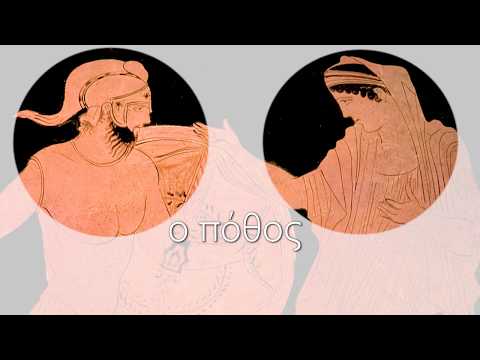