The Australian travel site traveler.com.au presents the top 10 ancient Greek sites. The most recognizable feature of the Greek temple are the massive columns. The Greeks used three types of columns: the Doric, Ionic and Corinthian order. You can find famous Greek temples around the Mediterranean.

This rocky outcrop is sprinkled with dozens of ruined monuments and topped by the Parthenon, the largest Doric temple ever completed in ancient Greece. Among other highlights is the Theatre of Dionysus, built into hill’s flanks. Above is the dainty Temple of Athena Nike, from which you can see the Mediterranean, and the Erechtheion, a beautiful temple supported by graceful sculptured female figures. 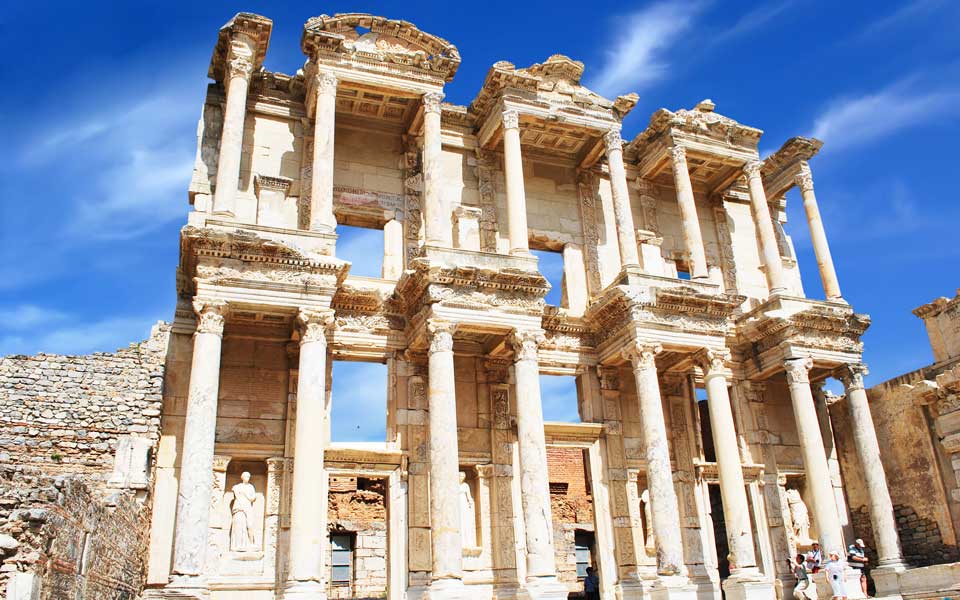 This Greco-Roman trading city is well preserved enough to provides a fine impression of Greek formal town planning. Its squares and colonnaded streets are lined by theatres, temples, villas and bathhouses, and lead to a hippodrome and open-air theatres. Some of the delight is in the fine detail: sculptures, curlicue cornices, mosaics. The highlight is the ornate Library of Celsus, actually a later Roman construction in marble. 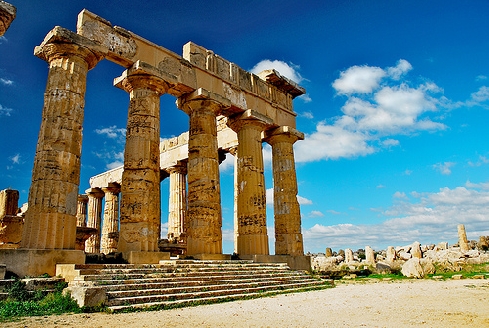 This city in southwest Sicily was destroyed by the Carthaginians around 250 BC and later further toppled by an earthquake. Today it’s a tumble of collapsed walls and pillars, but you can trace shadowy imprints of streets and building foundations. The best-preserved temples have a solitary grandeur. Wild flowers sprout, lizards dart, the sea glitters: this is a place for the poetic of soul. 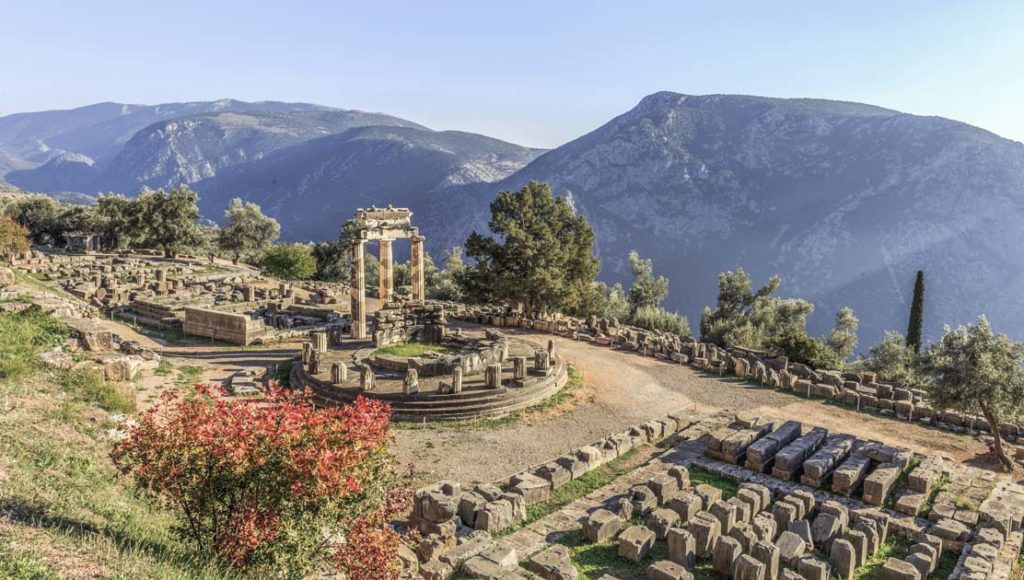 The ancient sanctuary sits above the olive-covered Pleistos Valley, overshadowed by two rocky peaks; the smell of pine trees is intoxicating. For 2,000 years the ancients came here to consult the fabled oracle, leaving grants to build temples across the hillside in serried ranks. The best-preserved structures are a theatre, stadium and treasury; the archaeological museum has a superb array of artefacts. 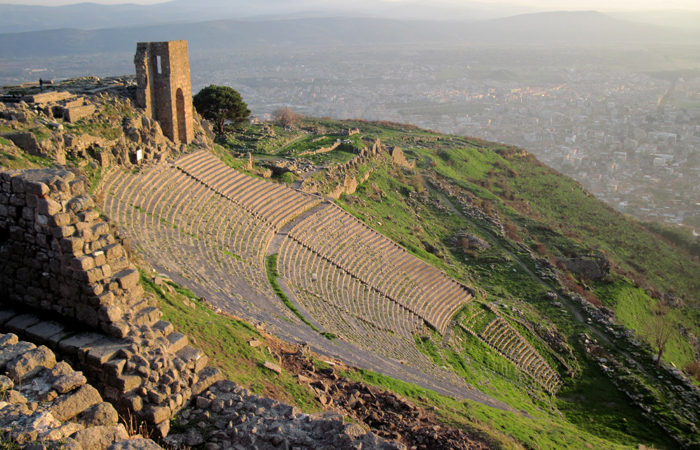 There are two parts to this splendid ancient city. The acropolis is crowned by the skeleton of a fine temple and has a well-preserved 80-tier amphitheatre wedged into its steep sides; views across the plains below are enough to impress eagles. In the valley below are the remains of Asklepion, a medical centre dotted with the remnants of treatment rooms, fountains, mud baths and sleeping chambers. 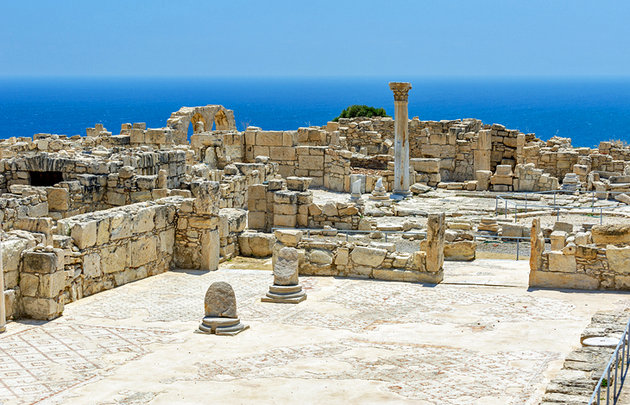 Fine views of cliffs plunging into the Mediterranean make this coastal ruin one of the most scenic anywhere. Below lies a beautiful sand-and-pebble beach, off which kite-boarders dart and soar. The ruins of the city-state centre on the Sanctuary of Apollo Hylates, one of ancient Cyprus’s most important religious centres. Layers of history have been added, including a Roman stadium and villa, and a fifth-century Christian basilica. 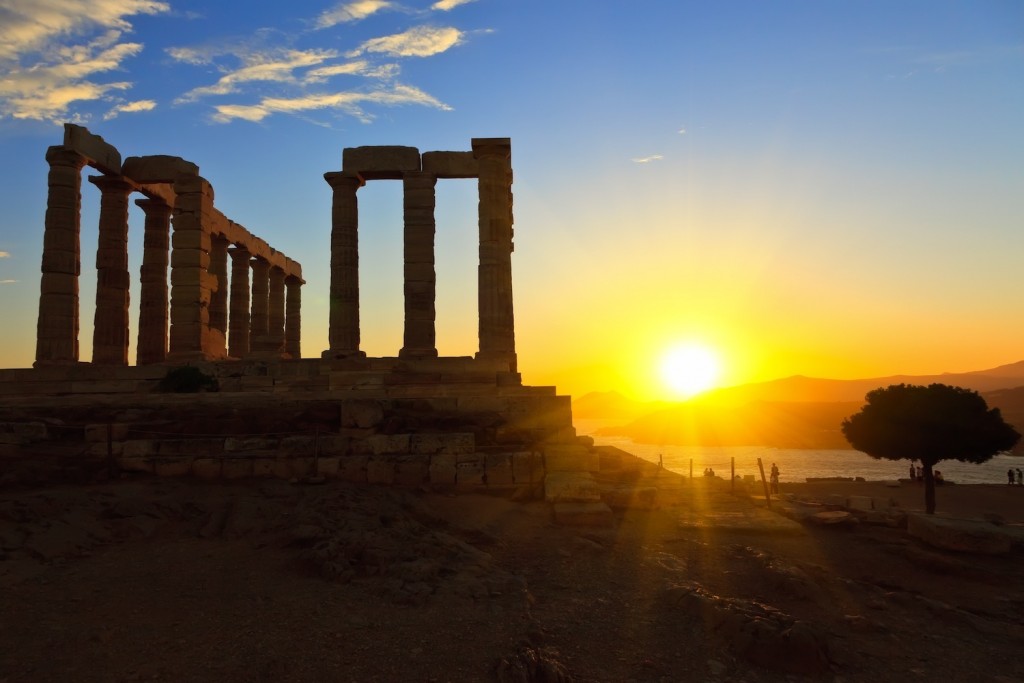 Southeast of Athens, just before you fall into the Mediterranean, stands the ruins of a temple dedicated to Poseidon. The temple was built in 444 BC and has 16 of its original 34 columns remaining. It isn’t the best preserved Greek building, but views of the sea between its columns are glorious, especially as the sun sets over the Aegean.

8. VALLEY OF THE TEMPLES, AGRIGENTO, ITALY 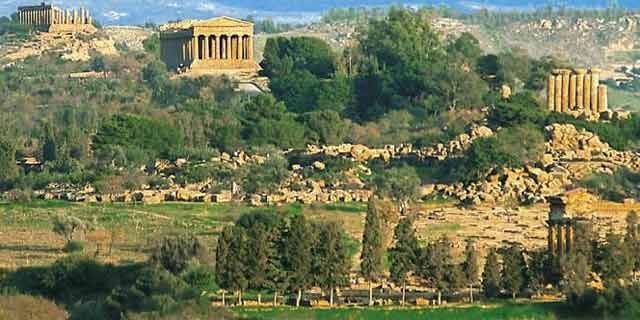 The cities founded by Greek colonists in Sicily became incredibly wealthy. Agrigento boasts several magnificent buildings; the Temple of Zeus is the largest in the world, and the Temple of Concordia is considered one of the greatest masterpieces of Doric architecture. The setting of the honey-coloured ruins on a rocky ridge covered in almond trees is inspired, the landscape falling away to the distant blue sea. 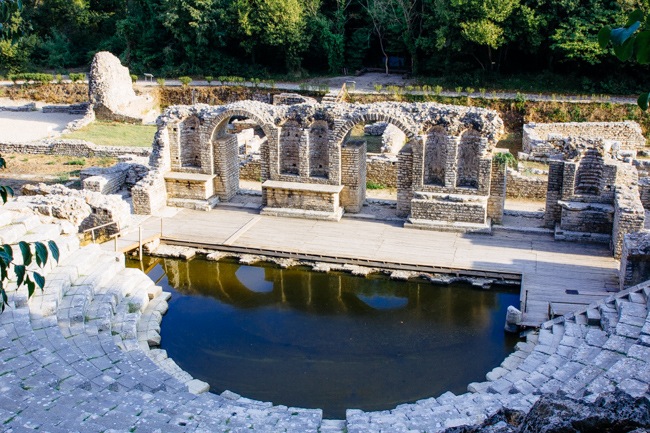 Butrint was established as a fortified Greek trading city in the sixth century BC and is overlooked by an acropolis, while below lies a theatre, villas, mosaic-decorated public baths and other civic buildings. The ruins span a staggering 2,500 years, and include a sixth-century baptistery and nineteenth-century Ottoman fortress. The ancient city sits in pretty countryside near a river, with views to distant mountains.

Many Greek theatres are larger and better preserved, but Taormina’s sits in a dazzling location, offering a view along the cactus-covered coast of eastern Sicily towards the sometimes snow-capped – and sometimes smoking – cone of Mt Etna volcano. The theatre is hewn out of the hillside above the town, and its fine acoustics are still put to use during summer music and film festivals.