Greek-Australian picked by Trump for Manufacture board

President-elect Donald J. Trump has selected Dow Chemical Co. Chief Executive Andrew Liveris, to head a manufacturing council, bringing the head of the Michigan-based company on stage during a campaign-style rally to make the surprise announcement.

Andrew Liveris, a Greek-Australian, was elected as chairman of the Dow Chemical board effective 1 April 2006. He was also appointed by U.S. President Barack Obama as Co-Chair of the Advanced Manufacturing Partnership.

The two men showered each other with praise, and Mr. Liveris made his own announcement, the chemicals and agricultural giant would open a new research and development center in Michigan. The center will include 200 jobs, half of which will be new and the other half that will be “repatriated” from other parts of the globe, the company said in a statement.

“This decision is because of this man and these policies,” Mr. Liveris said from the stage of the 6,000-seat Deltaplex Arena here.

“We’re going to put you all to work,“ Mr. Liveris told the crowd. ”We’ve got ideas and we’ve got plans.”

Mr. Trump said the details of the manufacturing panel—he referred to it as the American Manufacturing Council—would be available next week, when Mr. Liveris announces more members.

“We’re finding ways to bring industry back to America,“ Mr. Trump said. ”Nobody can do it like Andrew.” 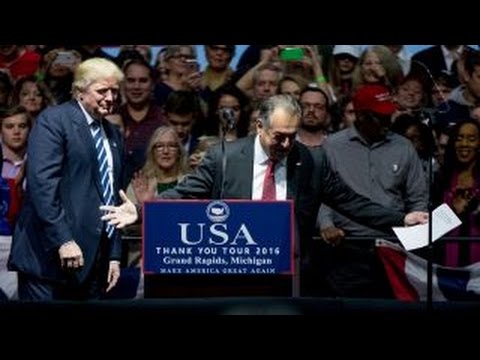