A Greek destination manages to be among the top 3 underwater Mediterranean destinations for the travel site Luxury Travel Blog.

The Earth’s oceans and seas cover more than 70% of the planet’s surface and still 95% of this realm remains unexplored by human life. Life in the oceans is unrivalled in its beauty and yet we have better maps of Mars than we do of the ocean floor. Considering that there are more artefacts and remnants of history in the ocean than in all of the world’s museums combined, it seems a shame not to explore its hidden treasures. Cruising has become a welcome alternative to hotels, so why not take advantage of some time on the water to step back in time and get up close and personal with history. We invite you to read on to discover the Mediterranean’s three greatest underwater attractions, which, at relatively shallow depths are accessible even to those who are not expert divers.

Once upon a time, this city was no more than a legend, but a team of marine archaeologists unearthed the ruins of Cleopatra’s ancient kingdom off the shores of the modern-day Alexandria in 1998. Earthquakes had resigned the Pharaoh’s palace to the depths of the Mediterranean 1,600 years ago, but now it is possible explore one of the richest archaeological sites in the world. Vast stone monuments, sphinxes, statues and temples lie upright and perfectly preserved at the bottom of the sea, while coins and other ancient Egyptian artefacts scatter the sea bed. Given the shallow depths of the site at just 5 to 8 metres underwater, you are guaranteed plenty of time to discover the wonders of Cleopatra’s Palace.

A short trip from the southern coast of mainland Greece lies the oldest submerged city in the world, dating back 5,000 years. Pavlopetri thrived for 2,000 years during the era of the birth of western civilization, meaning this is a UNESCO world heritage site particularly rich in history. Owing to the fact that its location was unknown until 1967 and that it remains relatively inaccessible, the city, a mere 4 meters underwater, is incredibly well maintained. The site also remains uniquely interesting to oceanographers and historians due to its intricate design and advanced infrastructure that surpasses even that of some modern civilisations.

Near the historical town of Genoa, a broad peninsula extends out into the Ligurian Sea. At its very tip is the beautiful town of Portofino which offers some of the best diving waters and is indeed where the sport of scuba diving was born. A favourite among the luxury sailing crowd, the Marine Park there has also long attracted divers from far and wide to witness this unique oasis in the Mediterranean. The unusual shape of the coastline, along with its marvellous coves and extraordinary rock formations, has resulted in a very particular environment which has spawned thousands of different species, carved out hundreds of coves and is home to some awe inspiring shipwreck sites from the First and Second World War. Such a varied marine landscape means an extensive choice of recreational and technical diving is available to accommodate divers of all abilities. Portofino is also home to the most well-renowned dive site of the Mediterranean, Guido Galletti’s ‘The Christ of the Abyss’, a giant, half-century old, submerged bronze statue of Jesus which rests on the sea bed. 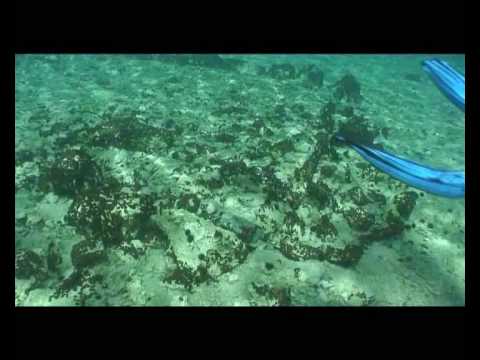