Greece is a beloved destination for the famous people around the world. Most of them don’t lose the opportunity to express their love and support for our country. Who are these «Philellines» that besides spending their summersin the greek beaches, they advertise our country worldwide?

Εllines.com team gathered for you quotes and moments of their visits in Greece, in the video «Love Greece like they do«.

Tom Hanks with his wife Rita Wilson, Rita is of Greek descent, love Greece and they prove it every year, as they spent their summer vacations in their house in the island Antiparos. The 57-year-old actor revealed that his granddaughters, two-year-old Olivia and two-month-old Charlotte, call him «pappou» and his wife, Rita Wilson, «yia yia» as in the Greek tradition.

«We love Greece too much to leave . . . we have other islands to go to before heading back to France” said Angelina. After the movie Tomb Rider, that was filmed in Santorini, Angelina with Brad Pitt and their kids often visit Greek islands as Mykonos, Santorini but also Chalkidiki.

“We have been in Greece many times and I love it. It is one of the most beautiful places in the world!” said the famous actor. Although many times the press claimed the couple bought a house in Greece, Brad denied it.

The Colombian actress of “Modern Family” chose the Greek islands for her vacations for 2013 but she has been in Greece many times. Her photos on the beautiful beaches of Mykonos made the headlines all over the world. “I love Greece, I think that it is one of the most beautiful places in the world” said Sofia.

Russell Crowe created a stir when he visited Mykonos. He tweeted: “How is it that I’ve lived 49 years on this planet but never been to the Greek Islands before. So beautiful. Yassou Mykonos I will return”.

The famous Hollywood actor has chosen Mykonos as well as Samos for his vacations. He wishes to remain incognito during his visits, but he can resist the beautiful beaches.

Holywood celebrities Goldie Hawn and Kurt Russell visit Skiathos island every year, declaring their love for Greece. They have bought their own house in the island. Goldie’s daughter, Kate Hudson visits as well the family house and enjoys the amazing beaches.

John Travolta and Robert De Niro spent a few weeks in Greece travelling with a yacht in various greek islands as Skiathos and Mykonos.

The famous singer with the football player Gerard Pique chose Mykonos and Santorini for their vacations. They were surprised by the beauty of the islands and the Greek seas.

Cristiano Ronaldo chose Creta, for his vacarions with the beautiful model, Irina Shayk. They were amazed by the beautiful beaches of Elounta.

Leonidas of the “300” movie, claims that after the movie he feels a little bit Greek himself!

Monica loves Greece and every summer for the past few years she tends to spent a few weeks in her favorite island, Paros.

The famous couple love to visit one of the most luxurious hotels in Greece located in Pylos, Messinia.

The 25-year-old singer, during her «Diamonds» world tour, she made a stop in Greece. The star posted a series of photos of herself posing poolside on her Instagram account with more than 12 million followers!

Steven Spielberg, has also visited Greece several times “It is a nature’s country with great people and I am very proud to go there a lot” said the famous director.

Jon Bon Jovi visits Greece often. A few years ago he visited Athens and Myconos where he was on vacation, while in 2011 he performed for the first time ever in front of 70.000 fans in OAKA Stadium. A year later, in 2012, he returned in Greece as he went on a short vacation tour in the Ionian Sea. He visited Corfu, Kefalonia & Ithaki with the luxury yacht C2. Jon Bon Jovi is a lover of Greece and he proved it as he visits the country for the 4th time in 4 years.

Hollywood star Leonardo di Caprio enjoyed his holidays in the beautiful island of Spetses. With his girlfriend at the time, Bar Rafaeli, visited Spetses and other islands.

»Greece left me breathless» he stated. “Greece is for sure one of the most beautiful places I have been. The islands are amazing in combination with great food, history and the discovery of culture that origins from Ancient Greece and you see it everywhere. The majority of the actors visiting Greece, we combine Greece with the food, because when in Greece the flavors come alive and they take you in a dream trip».

American pop icon Madonna was so enchanted by her last visit to Ithaca that she decided to invest on the Ionian Island and buy property. It is no secret that Greece and especially the Greek islands are one of Madonna’s favorite summer destinations. In 2010 she enjoyed a secret vacation on the island of Mykonos, where she has vacationed several times in the past, and also made a stop in Rhodes on her private yacht.

The best ambassador for the island of Patmos is Richard Gere. For the last 17 years he has been visiting the beautiful island. Gere thinks Patmos is great for meditation so he is looking for a house to buy there.

The talented and charming American actress Julia Roberts has been visiting Greece many times, and seems to prefer the lovely island of Patmos.

Legendary James Bond figure Sean Connery is said to have his own Greek home at Portocheli, near the islands of Hydra and Spetses.

The couple visited Athens and the Acropolis Museum and then headed for the islands. Their first stop was Zakynthos and the with a yacht headed for Kefallonia. Michael Douglas has declared many times his love for the greek islands.

Bruce Willis is rumored to have bought his own land on the island of Corfu. He has visited Greece many times, but as it seems Corfu «stole» his heart.

The famous actor visited Hermoupolis of Syros to enjoy the picturesque houses, as well as a perfect view of the Aegean Sea. He is thought to be interested in getting his own house in Syros soon.

Michael Jordan and his young second wife, Yvette Prieto, chose Greece for their honeymoon. They visited Spetses, Mykonos and Santorini.

The famous singer and actress loves Greece and when she visited Athens with her ex husband singer Marc Anthony, she was photographed at the Acropolis.

«If I was the prime minister of Greece I would make all possible investments and efforts in tourism! Greece is the most beautiful country and that’s enough to overcome any crisis!» said the Lopez.

«The photographing at Parthenon was the most incredible experience! I am soon coming to Greece again, this time for vacation!» she added.

«Two generations ago the name of my family was Bellas, and I feel that I am a Greek by blood» said the actor who a few years ago visited Mykonos with his wife and 2 children.

The English Actor Visited Greece and loved every aspect. Fry stated among others that British tourists love Greece and see it as an ideal, safe holiday destination. “Global civilization owes a lot to Greece and we must never forget that”. 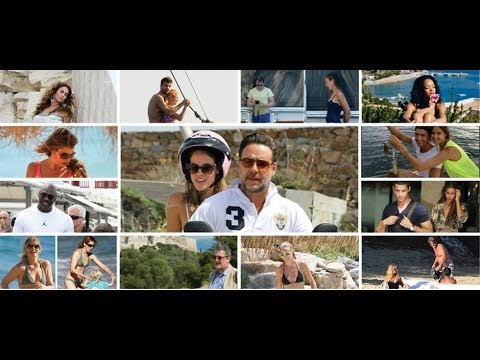