Kyriakos Papadodimas is Assistant Professor at Groningen University of the Netherlands and Researcher at CERN in the field of Basic Sciences (Nuclear Physics – Elementary Particle Physics – Astroparticle Physics). He attempts to formulate a more accurate theory of what is happening inside the black holes.

His work focuses on the development of quantum gravity theory, mainly through the framework of superstring theory and holography. In recent years, he has made significant progress in resolving the “black hole information problem” originally formulated by S. Hawking, which is seen as one of the main problems of quantum gravity.

He is one of the five Greek scientists excelled abroad who were awarded with the 2017 Bodossaki Science Awards for their performance and contribution to the scientific fields of science, life sciences, applied sciences and social sciences. The awards were given by the President of the Republic, Prokopios Pavlopoulos, at a special ceremony held at the Zappeion Mansion.

The Greek researcher said in his speech: “Using some modern theories, such as superstring and holography, we managed to explain, to propose a solution for how the information in the process mentioned by S. Hawking is not fundamentally destroyed but it is encoded in the information emitted by a black hole. Our theory can play an important role in the goal of unifying quantum mechanics with gravity and we continue to develop it further.”

According to S. Hawking, black holes emit thermal radiation and after a long time they finally “evaporate”. In this process black holes completely and fundamentally destroy the information of matter that fell into the black hole. However, such a destruction of information is totally incompatible with the theory of quantum mechanics. This contradiction is the so-called “information paradox”, which has been studied for decades.

“Today, in order to understand what is happening inside a black hole, we need a complete theory of quantum gravity. The question of what is happening inside a black hole is linked to the black hole information paradox formulated by S. Hawking. Black holes emit some kind of quantum radiation, i.e. particles, so they lose mass, become smaller and disappear. However, according to the calculation of S. Hawking, this radiation has a very odd feature which is that it destroys the information at a fundamental level, which means that the information of the star that created the black hole disappears completely from the universe and is destroyed. If this result was correct, that the information would be fundamentally destroyed, it would have a major impact on the foundations of physics, because it would mean that it is impossible to predict the future of the Universe using natural laws”, Kyriakos Papadodimas points out.

Many physicists have been trying for decades to determine whether S. Hawking’s predictions are right. In 2013, K. Papadodimas and his team proposed a new solution to the above contradiction and to the black hole information problem, which provides a new understanding of how information can be stored and maintained during the creation and the “evaporation” of the black holes. The theory developed by K. Papadodimas has received great international recognition and continues to be explored and developed by the experts in the field.

He graduated from the Department of Physics, University of Athens. He continued his studies at Harvard University in Boston, where he received his Ph.D. in Theoretical Physics in 2006. He then continued his research activities in post-doctoral positions, first at the University of Amsterdam and then at the European Organization for Nuclear Research (CERN) in Geneva. In 2012 he went to the University of Groningen in the Netherlands, where he established his research team on the subject of “Quantum Gravity and Holography”. He then returned to CERN, where he works as a researcher at the Department for Theoretical Physics while maintaining his team at Groningen. 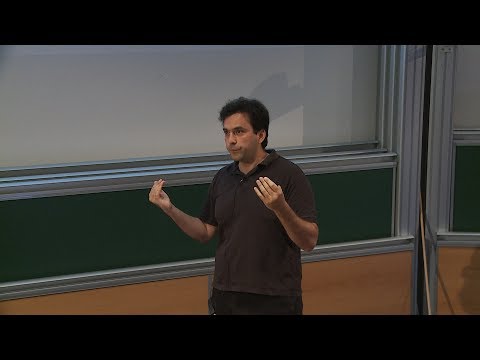