From Mistras Castle to Wall Street

Sotirios Vahaviolos is the Chairman and President of Mistras Group since 1978, a company that grew and made it to Wall Street in 2009 the growth rate was 20-30%. His company deals with innovative technology used to evaluate the structural integrity of critical energy, industrial and public infrastructure anc covers 85% of the global market in the field of Acoustic Emission as a method of Non Destructive Testing for all types of infrastructure, from bridges to nuclear power stations. Mistras group employs 4.250 people around the world, has 90 locations from Japan and Brazil to India and Canada and has world class clients suchs as BP, Total, Chevron, Airbus, Boeing, General Electric Engines, Snecma and more. 6 out of ten oil refineries in the States use its technology. Also, dozens of nuclear power stations from the US to Pakistan use its technlogy to protect their facilities and infrastructure.

Sotiris was born in 1946 and is the second child of Ioannis (butcher) and Athanasia (housewife). He owes his love for math to his uncli Ntinos (his father’s cousin). “My father’s butcher shop was kind of like my second school”, says Vahaviolos, who used to help his father there. “Noone has ever died just because he works hard”, his father used to say him, every time he needed help during Easter where they had to butcher around 200 lambs. “You never know what will happen tomorrow”, he added. “And he was right”, says Sotiris. “I started working as a butcher for some years in the States and I made pretty good money. You see, it was a job that not all people could do”.

As a kid, Sotiris was fond of electronics, and in 1966 he decided to move to New Jersey (to study), where his sister Voula -married to a Greek priest- lived. Of course the greek church played an important role to his decision. He received a BS in Electrical Engineering and graduated first in his class from Fairleigh Dickinson University and received a Master of Science (EE), Masters in Philosophy and a Ph.D.(EE) from the Columbia University School of Engineering. That is where he met his wife, Aspasia, with whom they got married before his graduation. In eight year’s time he was Head of a department with 60 Ph.D. students and had managed to create 15 patents regarding signal processing and preventive infrastructure maintenance.

“I always wanted to have my own business. I am proud for a a lot of things, my patents, the books I have authored, my awards, but most of all I am proud to say I have created about 4.200 jobs. I say this to all the politicians I meet and all the Greek-Americans that play an important role in huge companies: the best thing for Greece is that they opened a factory, any type of factory, either small or big, it doesn’t matter. Because every factory is a reason for other factories to come along, and this is what creates jobs. I wonder, how many of us today really remember what it meant for Greece to have a company like Nissan manufacturing cars in Greece?”, says Vahaviolos in the same interview. 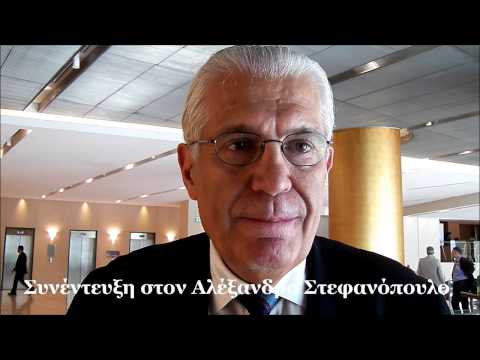