The place where the sea and nature become one

Relaxation, dreamy natural beauty and local character, emerald waters, hidden beaches of ecstatic aesthetics and scented pine trees, a city-painting with narrow alleys and neoclassical architectural sights. Skopelos, the greenest island in the country, where the dense forests are joined by the deep blue of the sea and the sky, is an idyllic land, a small paradise and an ideal holiday destination.

Lively history celebrates with the present and this pair makes the island more than just a tourist destination. Together with the imposing monasteries and the authentic island atmosphere that make up the image of Skopelos, the mountains with its many springs constitute another unique gem of the island.

The tour begins from the capital of the island, the beautiful, traditional, officially preserved, and amphitheatrically built Chora, with the picturesque paved alleys, the scattered churches and the magnificent ecclesiastical monuments. The beautiful island houses with the blooming courtyards surround the old Episkopi, the Folklore Museum, the Ancient Asklepion in Ambeliki, the home of the writer Pavlos Nirvana and the Venetian Castle of Gyzi.

The route that starts from Panagitsa of Pyrgos, at the edge of the harbor, and through the picturesque fiddling streets leads to the Castle of the Island, from which the view to the settlement, the port and the chapel of Panagia Pyrgos is of course seductive. 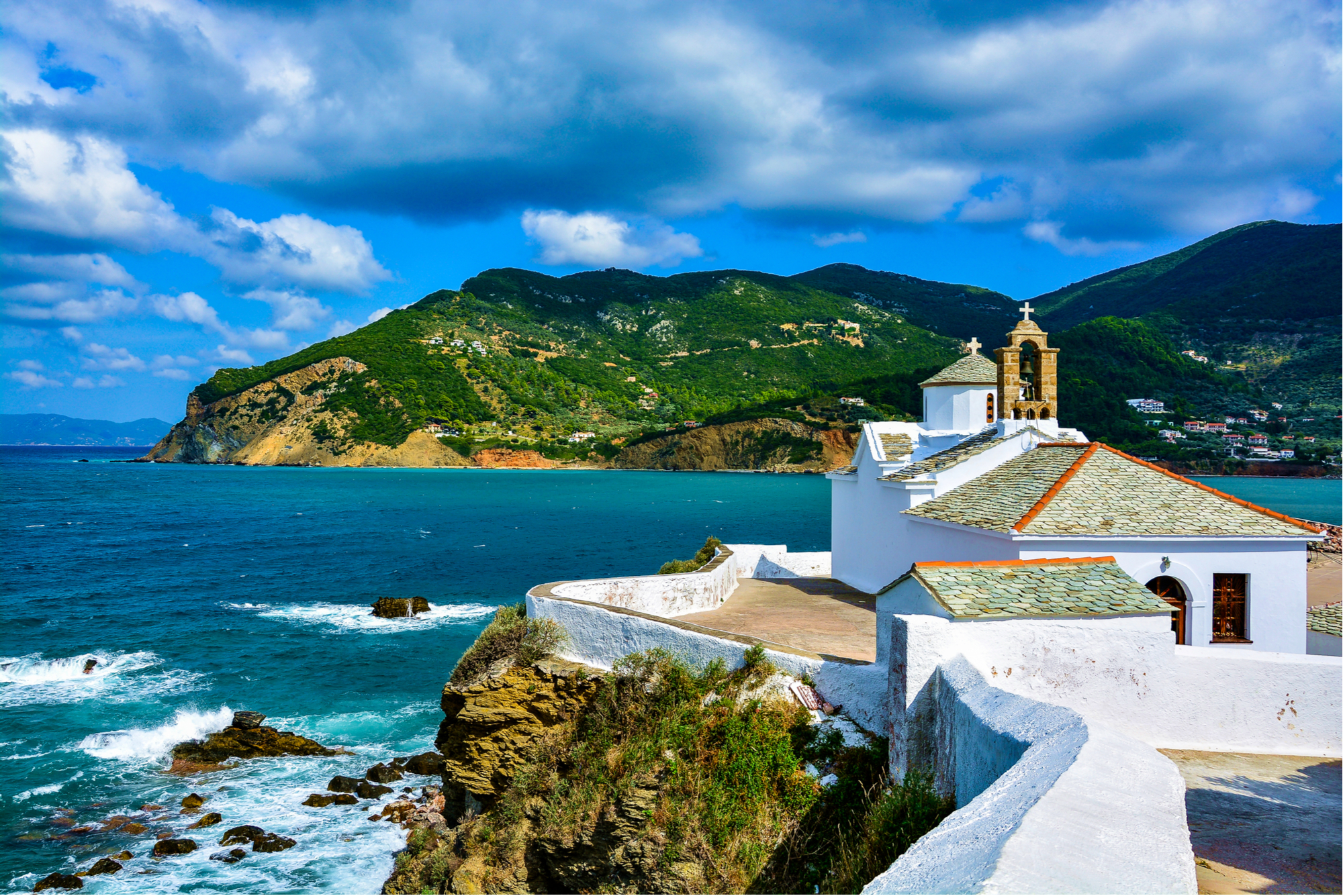 The settlement of Glossa, the second largest on the island after Chora, is built amphitheatrically on the hillside, is characterized by its traditional and “royal” character and hides small treasures. Among them is Panagia Eleftherotria, which was an oblation of a castaway in the Black Sea, who found the icon of the Virgin Mary and was saved, as well as a live hearth of tradition, the pottery workshop.

“The tall village”, according to Papadiamantis, and “the wine-growing area”, according to Moraitidis, consist of narrow alleys, tidy houses of traditional architecture and colorful corners, while the surrounding area is of great archaeological interest due to ancient towers and buildings that have been identified. The port of Loutraki is the second port of Skopelos, built on the ruins of ancient Selinountas and named after the Roman baths that functioned there. 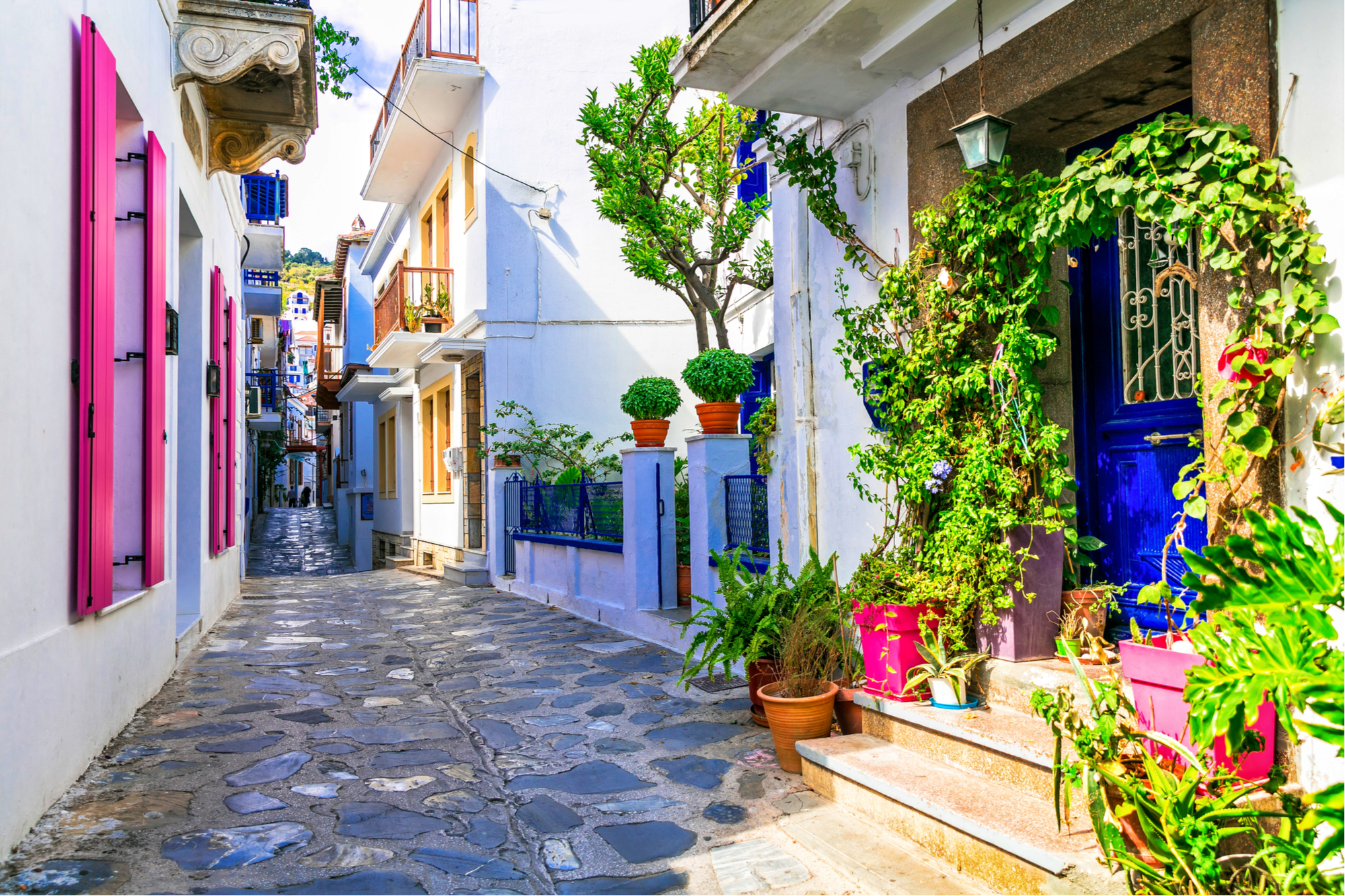 Forty small churches (some built in the 16th and 17th centuries) are hidden among the picturesque, traditional settlements, including Ai Yiannis in Kastri, a magnificent church perched on the top of a rock, which is approached by the steps that are carved on the slopes of the cliff and offers fantastic views both on the ascent and from the top. Its beauty touched even the Hollywood producers who chose to make the film “Mamma Mia” there, making the island a world-renowned tourist destination and attracting many couples who want to make their wedding there.

The imposing Byzantine monasteries, such as Evangelistria and Timios Prodromos, are built in idyllic locations, with the old monastery of Evangelistria famous for its catholic and fort-like quad, as well as the panoramic view to the Harbor.

The story behind the chapel in Draconsthisthama is interesting, as according to the legend, about 800 years ago there was a dragon on the island that killed the inhabitants, which resulted in it being deserted. At that time, Saint Riginos, patron saint and protector of Skopelos, pursued the dragon, which in an attempt to get out of it, fell and was killed in the cliff. The area where the earth was opened and it retreated to the ground was called Draconschisma (dragon-split). The steep gorge is behind a chapel built almost on the edge of the cliff, which is washed by the sea, while the steep rocks, “hanging” on the slopes of the pine trees and the turquoise waters create a landscape of unique beauty.

The amazing beaches with crystal blue waters and unparalleled natural beauty that takes the breath away are scattered all over the island, forming a conceived map of hidden treasures. Milia, perhaps the most beautiful beach on the island with fine, white pebbles, the characteristic rocks that emerge through the sea and the pine forest surrounding it perfectly complements the landscape. Limnonari, named after its calm waters, Velanio, one of the most beautiful beaches on the island, and Panormos, with its big pebbles, which gives an unforgettable experience at dusk, as the swimming seems to be taking place in a river with golden water, while the sun is lost in the depth of the horizon.

The holidays in Skopelos are colored in sea-blue and green because of the wonderful beaches and the pristine pine forests. This is the reason why on 5/7/97 it was officially declared as the green and blue island by the International Biopolitics Organization. The green Skopelos is surrounded by olive groves, pines, plane trees, fig trees, almonds, plum trees, walnut trees and other fruit trees, while running waters and ravines give a special touch to the scenery.

The traveler has the opportunity to make beautiful walks in the countryside and the forests of the island, both from the south and the north, which is wild but perhaps even more impressive. Moreover, the walker can admire the unique biodiversity that exists on the island, while pleasantly surprising is the encounter with flocks of the famous goat Skopelos breed, unique in Greece, with characteristic reddish brown fur. 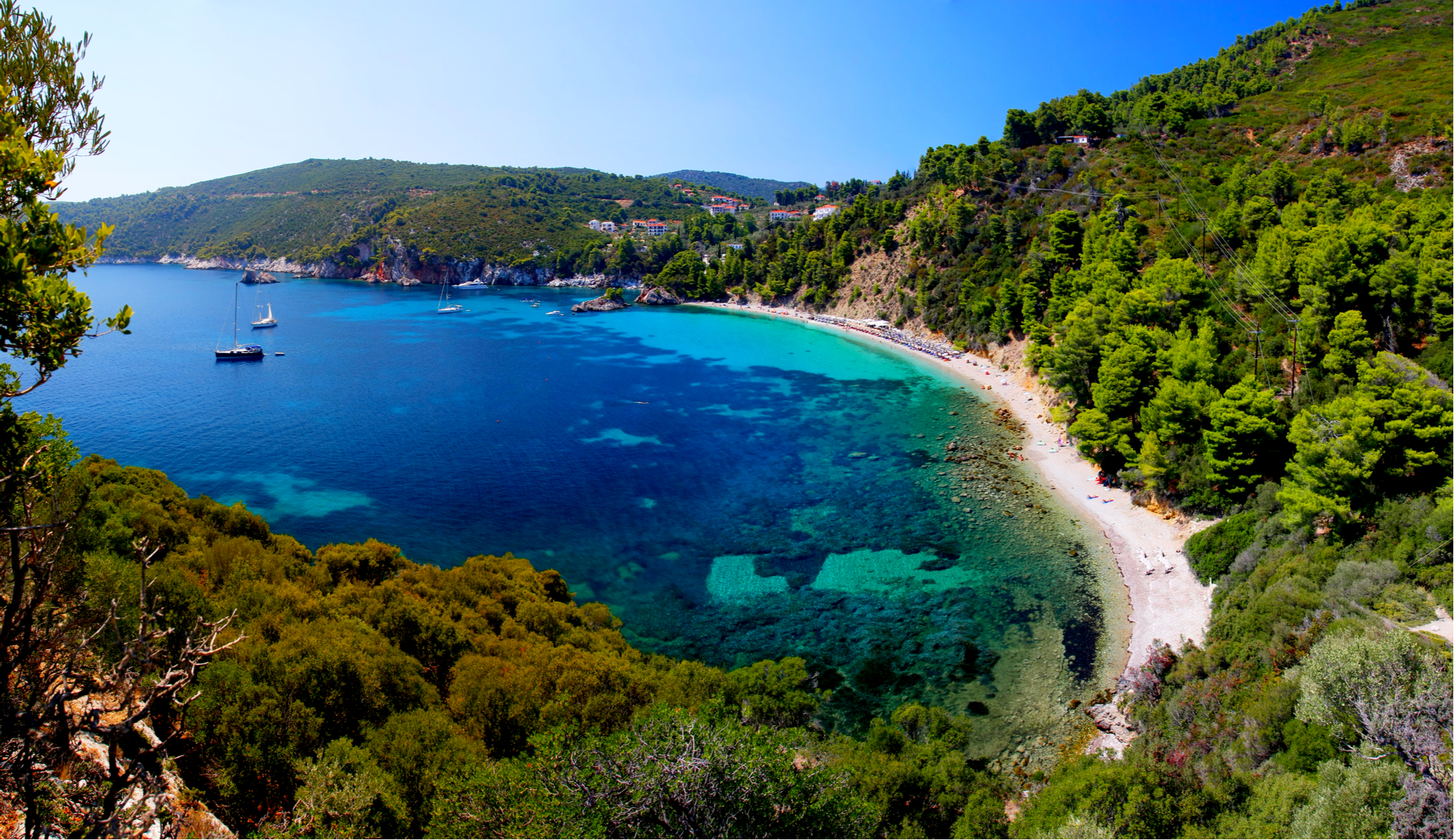 The family tradition of Skopelos continues in the workshops of the island, where black-painted vases, miniature ship paintings based on real designs, forged knives, oil paints, embroidery, hand-painted dishes are offered for unique and traditional gifts. The visit to these workshops of traditional artists, working for centuries with clay, wood, glass, metal, is a special experience.

The story of the famous Skopelos Agen plums begins in the early 20th century when Giorgos Valsamakis, an infantry officer, brought the vaccine from the French city of Agen to create the homonymous variety and the furnace plan, where plumes are cooked in up to now. 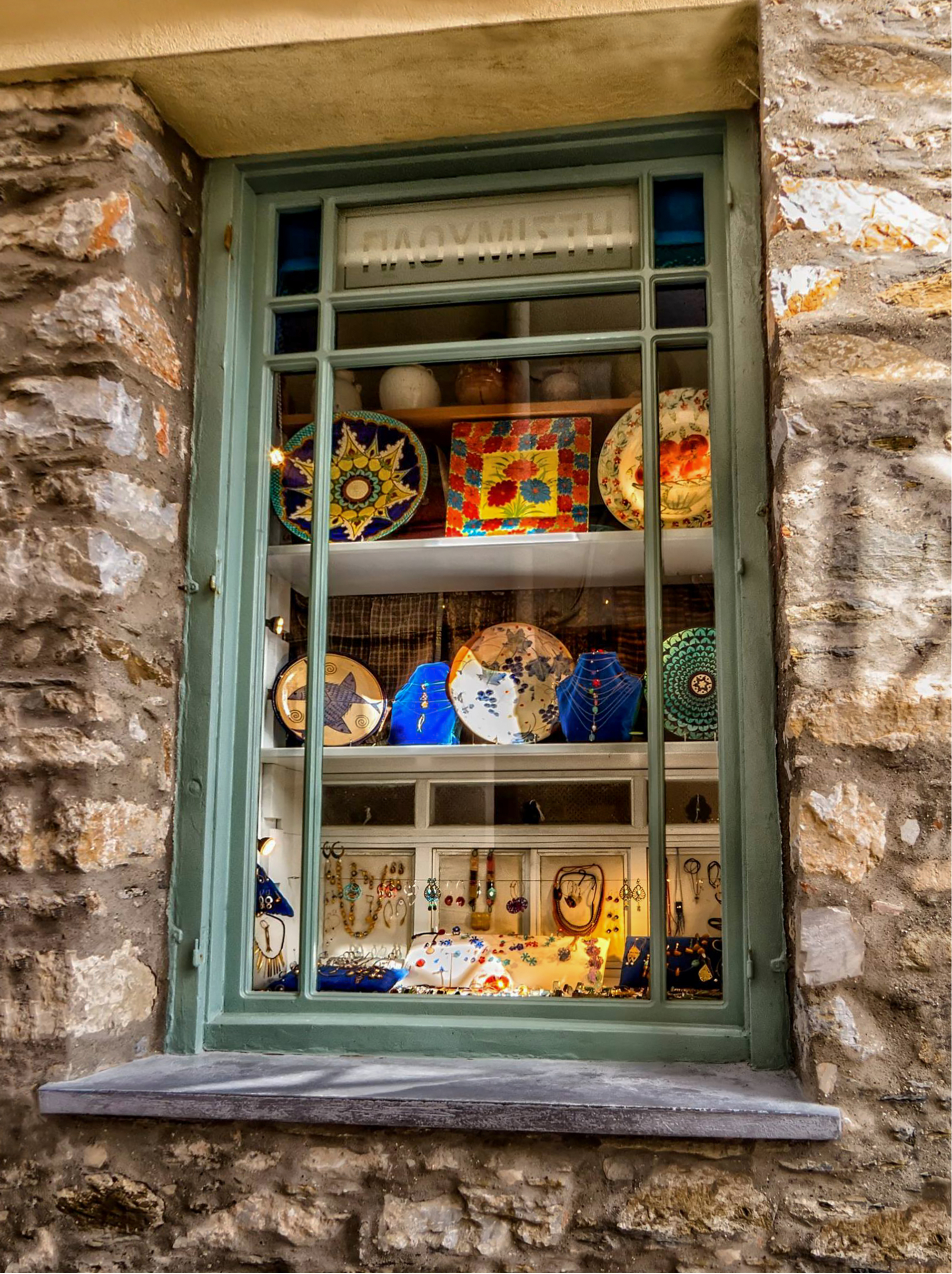 Finally, no one can bid farewell to Skopelos without having tried its traditional cheese pie, the reputation of which has reached all of Greece. This local dish is made from crispy dough (its shape is usually twisted) and has the local goat cheese as the main ingredient. 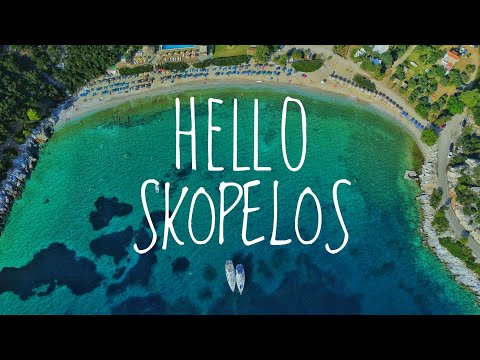