The “queen” of the Cyclades

Time of relaxation in a retro atmosphere, with music from the gatherings and the glamorous receptions of the 19th century, with quality and greatness from past times, magnificent urban mansions, imposing neoclassic, Cycladic alleys and two “different” hills united in the name of faith. The all-purpose and gracious Syros is the ideal destination for those who want to relax in a place that combines past and present, classical, traditional and modern in a mixture that awakens all the senses.

The wandering starts from the very first images that the visitor faces as they reach the port of the island, with their gaze immediately getting magnetized by the two peaks that dominate and welcome them. On every hill stands a church, the Byzantine, Orthodox Church of Resurrection on top of Vrontados hill, and the cathedral, baroque Catholic church of St. George, on the opposing hill of Ano Syros. This temple was rebuilt during the Latin occupation when the settlement was occupied by the Venetians and the locals assimilated to the Catholic doctrine. 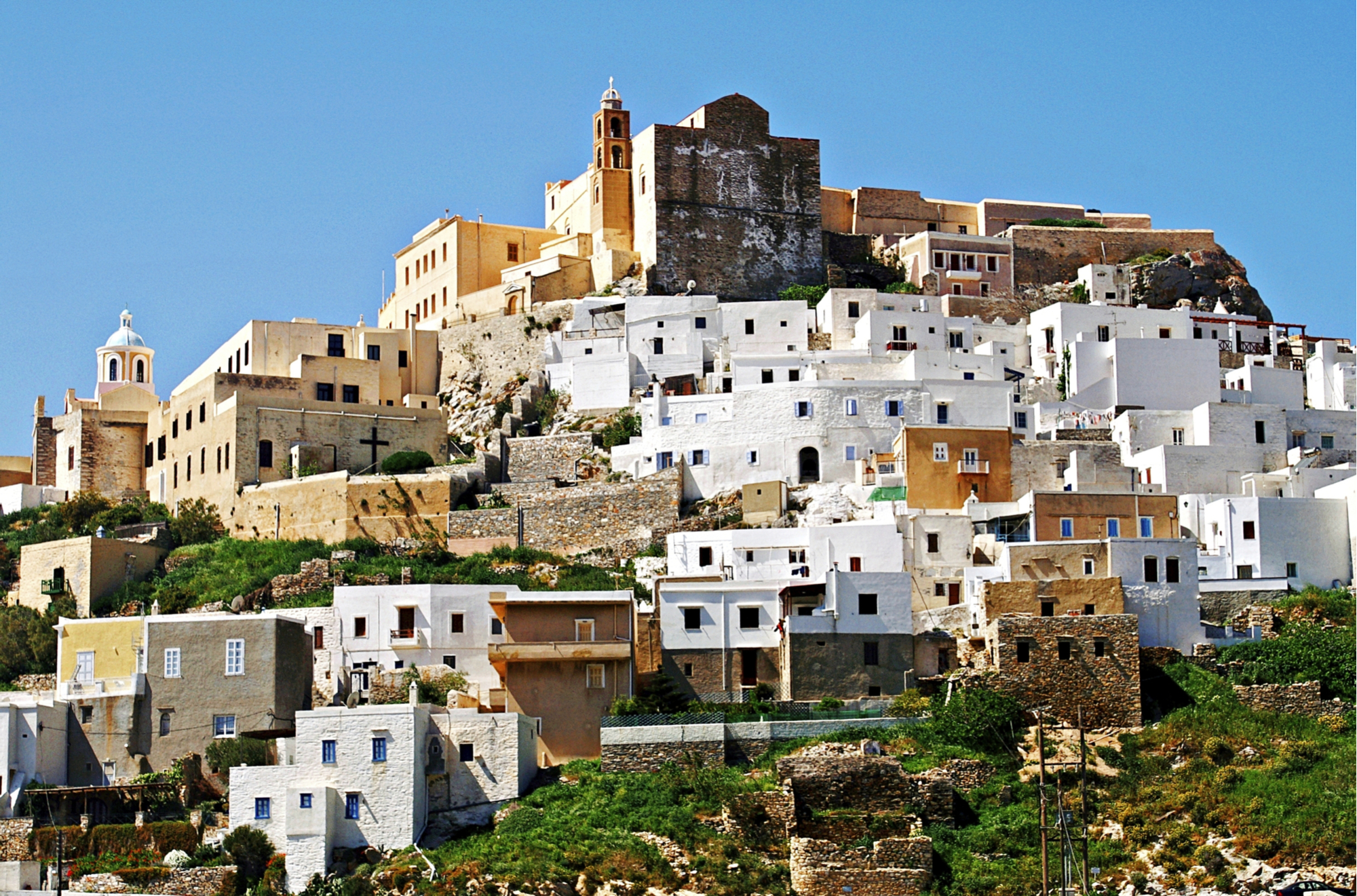 Set amphitheatrically on the hills up to the shores around the harbor, is the capital, Hermoupolis. Marble roofs, high-rise neoclassical buildings, a historical aura, the 19th century Town Hall in the central square that is a trademark of Syros, the work of Chiller, and around it the famous Apollo Theater, the Hellas Club, the Pallas Cinema and the Megaron of the Employers’.

The medieval settlement of Ano Syros, with its Venetian history at every step and the Catholic temple of San Giorgio, was built around 300 AD and is included in the protected historical settlements. It is the highest part of Hermoupolis, while with the white Cycladic houses with the basilicas and bougainvilleas it is the “balcony” of the city from where the magnificent view to the harbor can be admired. 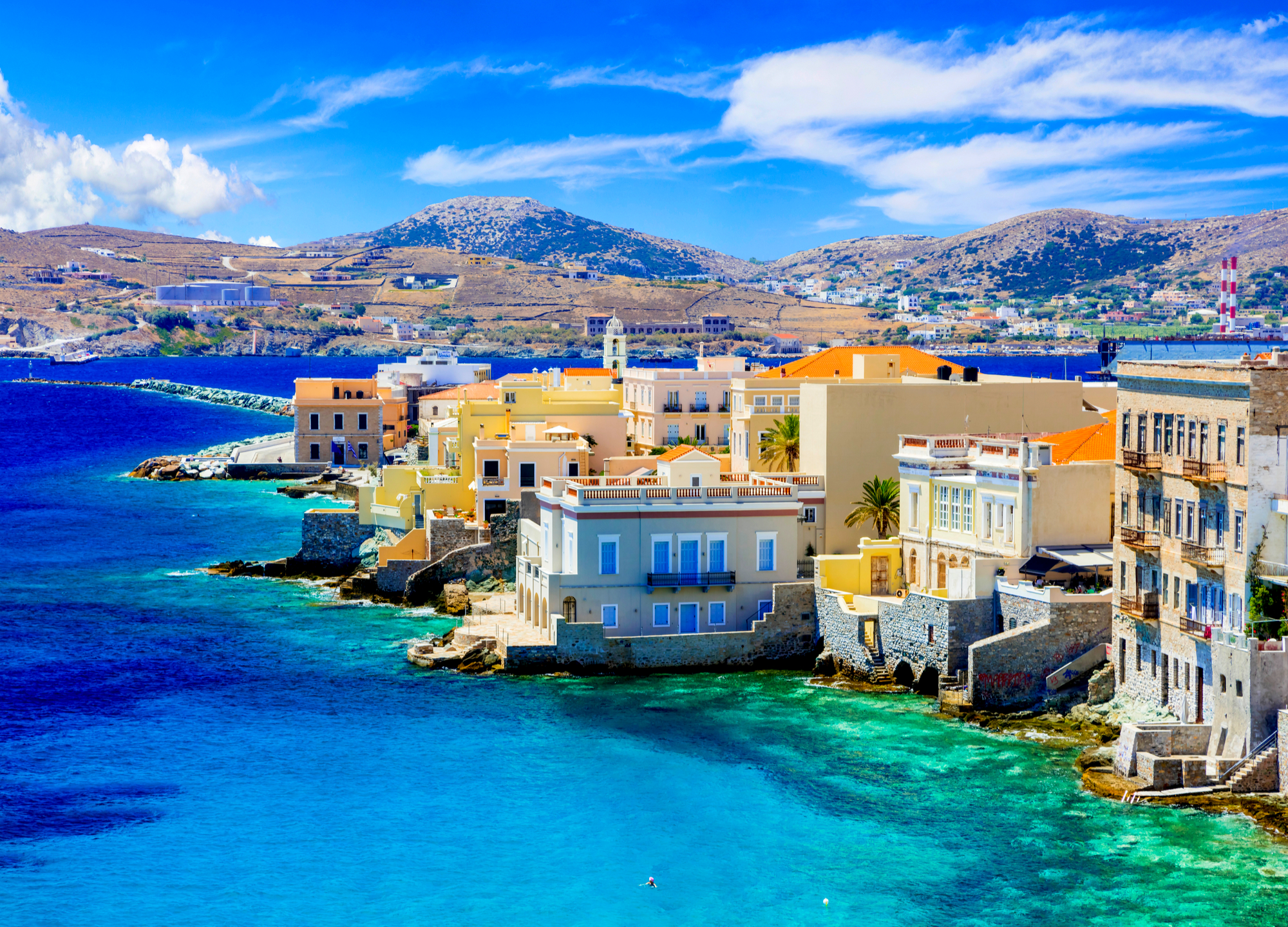 There, one travels in time and listens to the bouzouki of Vamvakaris in the narrow alleyways of his restored house, which now houses the museum Markos Vamvakaris, which hosts personal items, manuscripts and an interesting documentary. The great Greek composer was born in Syros, which inspired one of the most famous of his pieces, the “Frangosyriani”. The residents of the island honor him with the Vamvakaris square which hosts his bust.

Miaoulis square is located lower, closer to the sea, with the statue of Andreas Miaoulis on its center, the Cultural Center and the Municipal Library featuring rare material about the history of Syros, while close to the square, there is the Apollon Theater, which is a miniature of the Milan stairs. The whole area seems to retain something of its old glory when it gathered the city’s aristocracy, thus has been named National Historic Landmark. 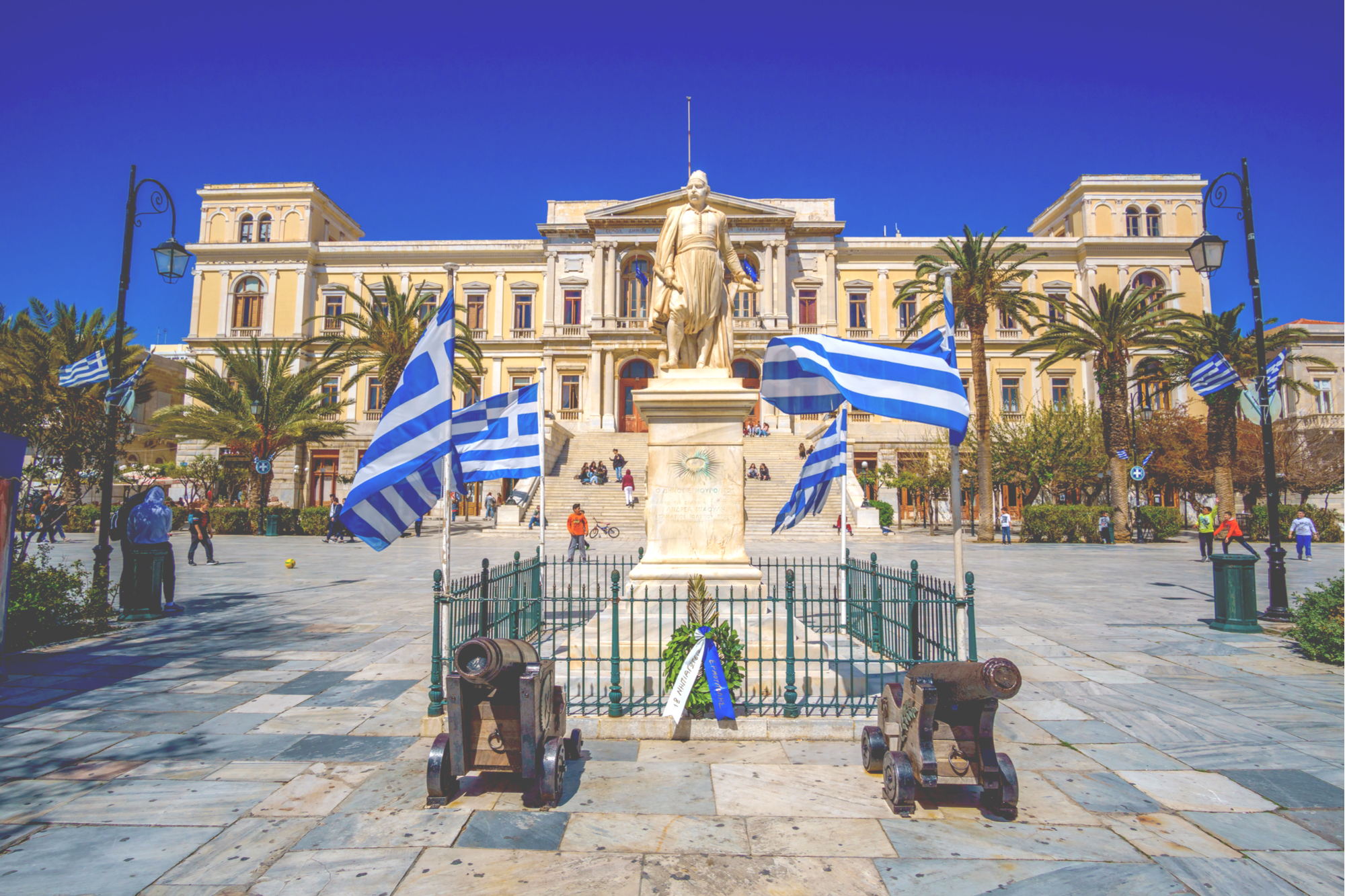 On the island, there is a historical-folklore museum and archaeological museum, while the industrial museum of Hermoupolis, which is the only one of its kind in the Aegean Sea, attracts even more interest. The visitor can wander in the industrial buildings where the museum is housed with a large collection of tools, equipment and machinery from the golden industrial age, from lab workshops to typography, permanent collections and exhibits for shipping, industry and Hermoupolis itself.

Moreover, near the prestigious district Vaporia and the imposing mansions that overlook the sea, Agios Nikolaos stands out for its beauty, its dome and its imposing size, filling the traveler with awe. The interior with its marble temple, despotic throne and chandeliers from Trieste are breathtaking. Worth mentioning is that the ecclesiastical choir of the church has been in operation since 1920 and that the Temple has the icon of the Assumption of the Virgin, the work of Dominikos Theotokopoulos. The icon is a work of 1562-64, among the early works of Theotokopoulos at the age of 19-22. 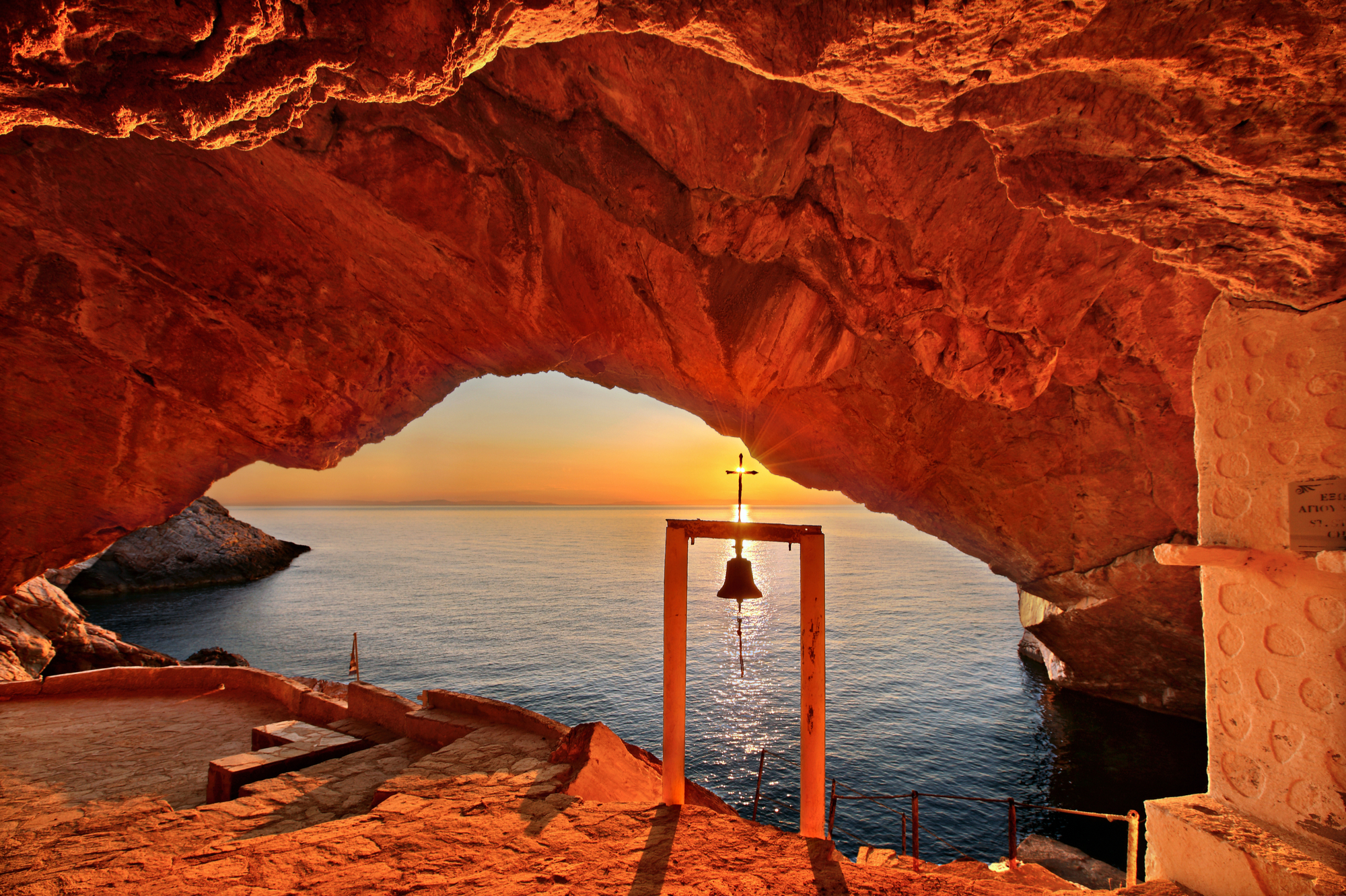 The northern part of the island is mountainous and inaccessible, but with stunning scenery and scenic beauty, few paths, bridges and pristine beaches, while in the southern, flat part of the island are most settlements and beaches. There, the road network is excellent and the roads connect all the villages and Hermoupolis with each other, while there are modern hotel facilities and organized beaches.

Apart from Hermoupolis, Syros has small resorts, fishing villages, countryside and beautiful beaches. The larger villages of Syros are Galissas, Kini, Pagos Chroussa, Posidonia, Vari and Finikas. Posidonia’s country-houses retain the nobility of the first Greek bourgeoisie, which was created in Hermoupolis in the 19th century. 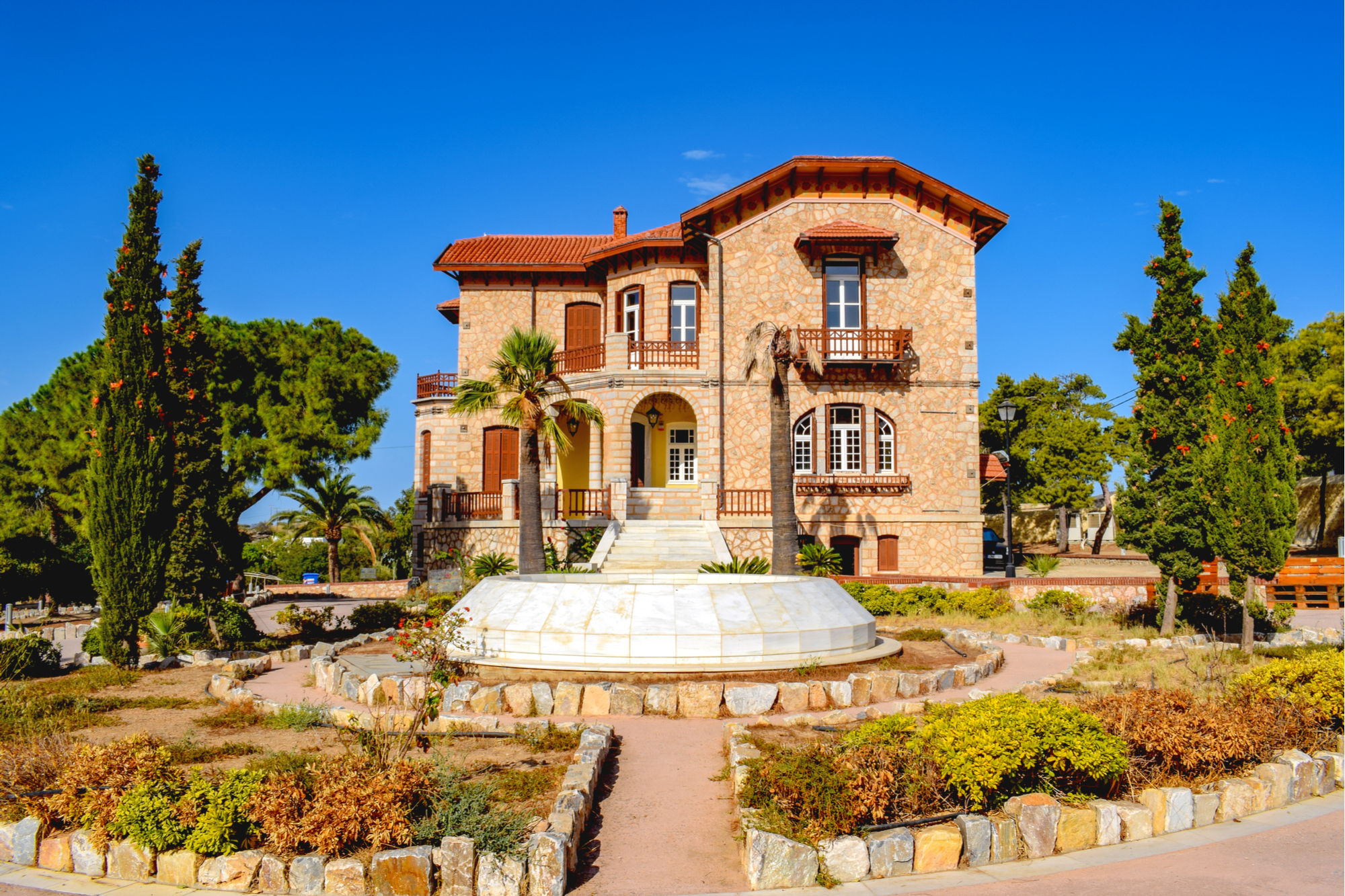 Delagratsia or Posidonia was once a place of the holiday for the aristocrats and is adorned with impressive mansions and neoclassical houses, while the small and winding bay of Vari and Kini, to the west of the island, has traditional taverns with fresh fish. The imposing country-houses in Posidonia, the stone dock with palm trees in Galissas and the picturesque country-churches in Chroussa are just some of the sights that are worth seeing in the beautiful settlements.

As for the beaches with clear, blue waters and beautiful coasts with the view of the endless blue of the Aegean, the visitor has a large number of options. The Galissas beach with the beautiful sand and Agathopes with heather along the west are the most known and popular, while in Hermoupolis beach has coffee bars, shops, taverns, restaurants and the casino, which is housed in a mansion dating back to 1830. Other small, beautiful beaches of Syros are the desert cove of Lia, Varvarousa, Marmari and Aetos, where you can reach by boat. 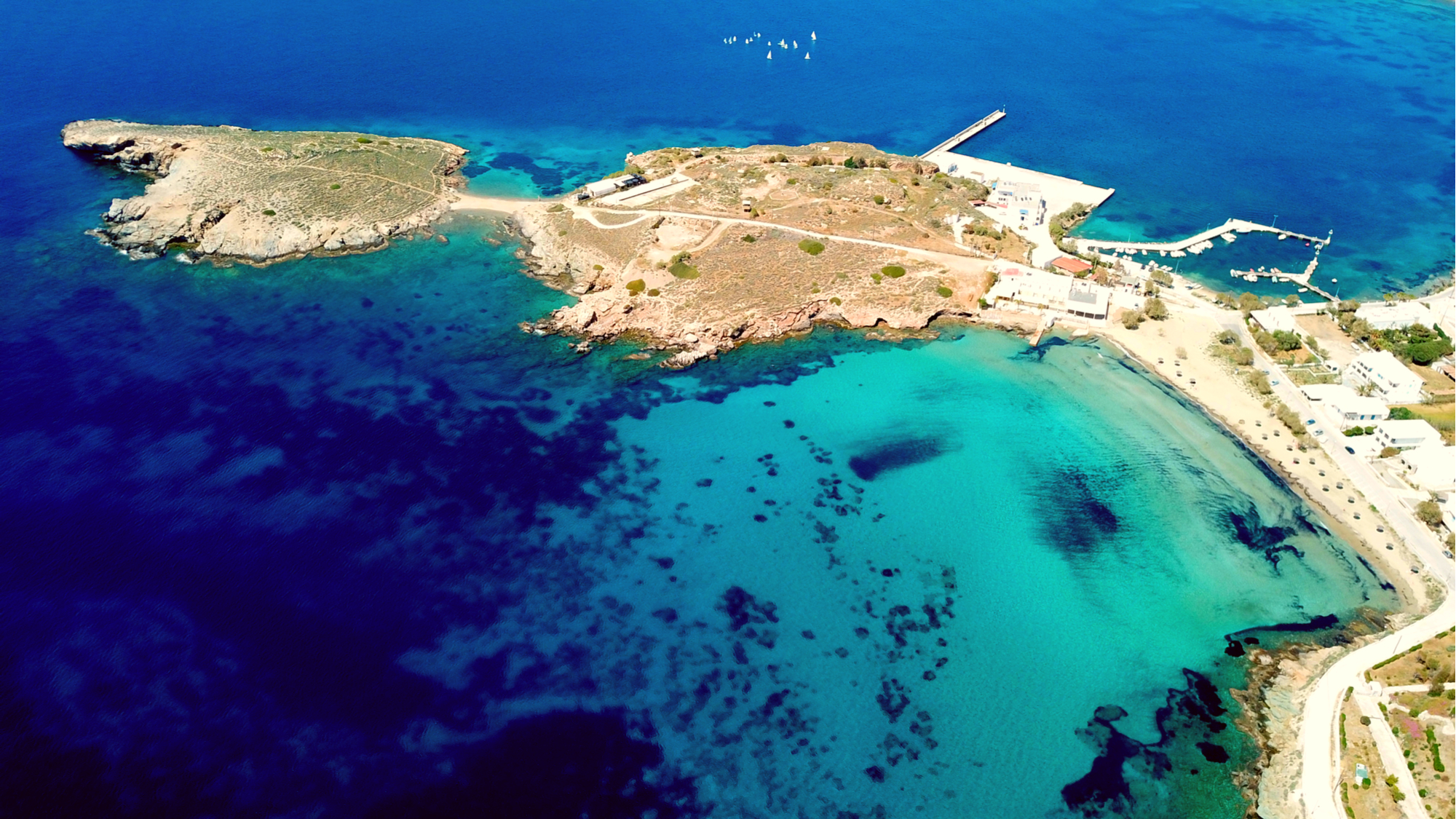 By boat or on foot you can visit the bay of Grammata (Letters) with the inscriptions on the rocks. Wishes, prayers and names, carved and dated in Roman and Byzantine times, come from sailors who found shelter from bad weather.

Unlike most other islands, Syros remains alive during the winter, mostly because of the students of the university faculties which reside in it, as well as the cultural activities that take place there (theatrical and cinematographic performances, music-dance events, training seminars and exhibitions). 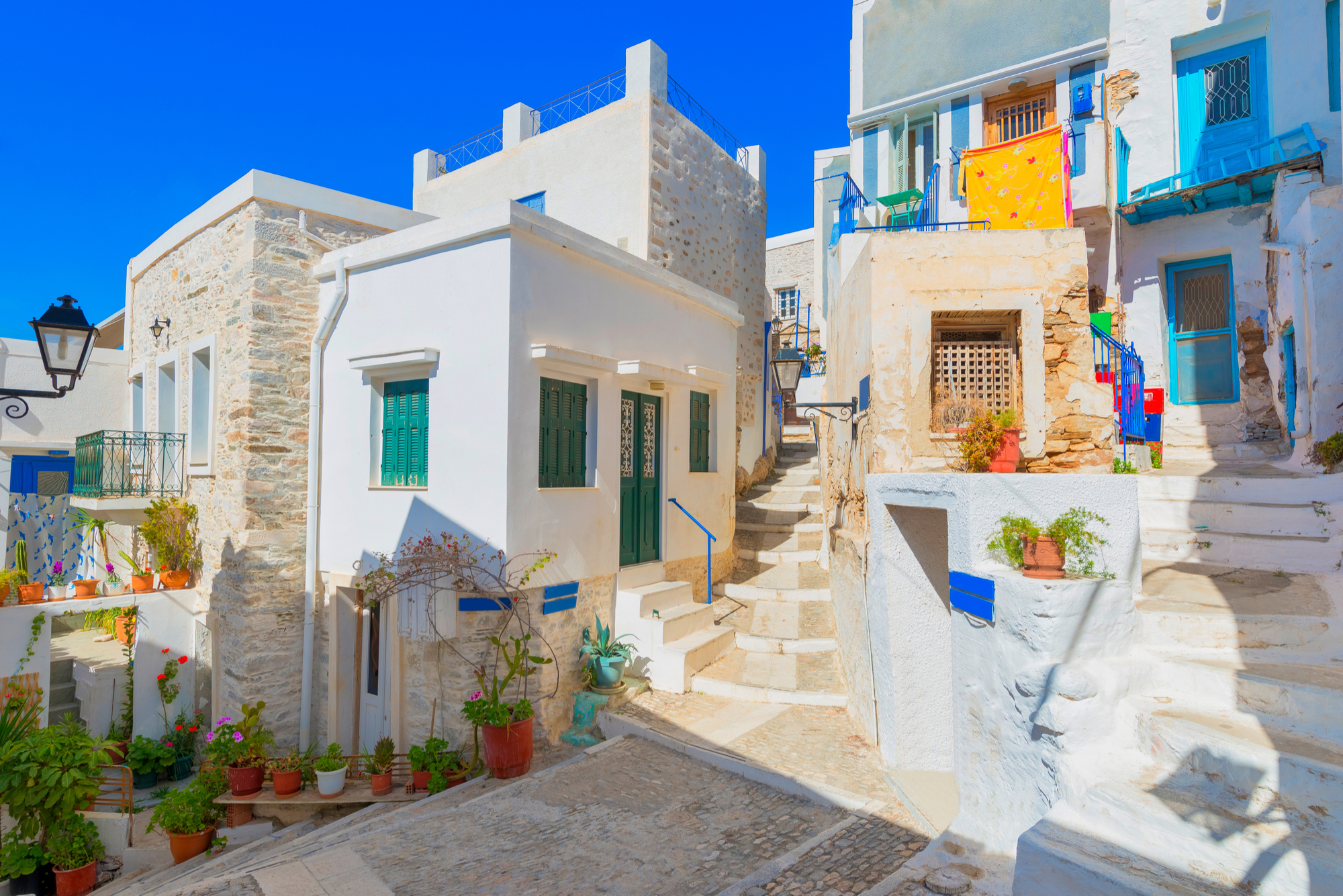 Special are the local products of the “queen” of the Cyclades as well, with the well known and popular Syros cheese, “San Michali”, the hard, yellow cheese produced exclusively on the island and officially recognized as a PDO product. In Syros, an excellent “Kopanisti” is produced as well as the famous “scordoloukanika” (garlic sausages).

Last but not least, there are more than twenty different kinds of Turkish delights and its halva-pies, which are sweets with an excellent taste and low fat. Moreover, on the rocky hills of the island, its inhabitants gather delicious capers, thyme, sage, oregano, chamomile and other herbs. 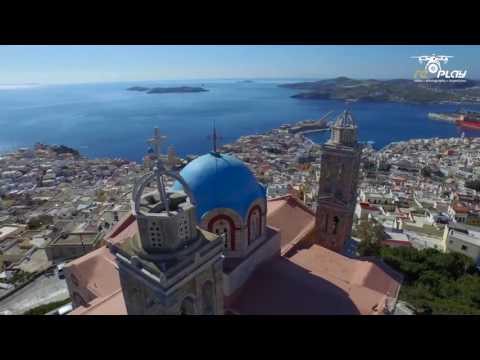