Athanasia Tzanou is a Greek multi award composer, widely known in Europe for her orchestral works.

Tzanou was born on June 25th 1971 in Athens. She studied composition with Franco Donatoni at the Conservatorio G. Verdi in Milan for 5 years, from 1993 until 1998.

She has been honoured with several awards for her compositions. In 2001, she received the Wolfgang Amadeus Mozart Preis, the Johannes-Brahms-Preis Award in Hamburg, the Andrzej Panufnik Prize for the best piece by a composer under 30 and the Günter Bialas Preis Award in Munich. In 2006, she received the Förderpreis der Ernst von Siemens Stiftung Award in recognition of her achievement as a young composer.

She has performed in several countries, like Argentina, Austria, France, Germany, Japan, Mexico, Holland, Greece and the United States.

Since 2003, Athanasia Tzanou has lived in Germany, as composition in Greece is less promising than abroad.

Her music had been perfromace from Radio France, SWR-Radio, ORF, WDR 3 , and forthcoming commissions include a piece for the group of Percussionist of the Theater of Scalla in Milan , a new  piece commission from WDR for the festival of Witten for 2004 (after request of Mr.Peter Eötvös)  for the Ensemble Colleguim Novum Zürich that will conductor Mr.Peter Rundel , and a  commission  from Bayrische Staat Oper for the Contemporary Music Bavarian State Orchestra that performance in March 2005 .

She’s chamber enemble piece with the title «Epigramma IV» has  performance in in the during of  Festival Wien Modern 2003 in a concert à Memoria of M° Luciano Berio in Musikverein, and she’ s piece with the title “»moving shapes of a wonderous spell….»commission from WDR will premeired in Witten Festival for new music, April 2004  under the coductor Mr.Peter Rundel and ensemble Collegium Novum, and Tonhalle Zürich. 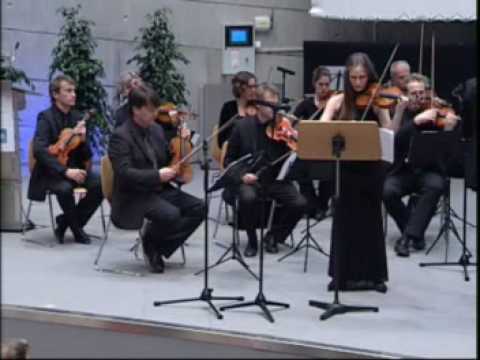