George Mastras is a director, screenwriter, producer and author. He is mostly known for his writing and producing one of the most awarded series in television, the 2 times Golden Globe awarded, “Breaking Bad”.

G. Mastras was born on November 3rd, 1954 and was raised in Boston, Massachusetts of the United States. He graduated from Yale University and also got a J.D. degree from UCLA Law. He worked as a criminal investigator for the public defender’s office, a counselor at a juvenile correctional facility and a defense litigator in New York and Los Angeles.

In 2006 he began writing for the TV series “The Evidence” and wrote the first season episode “Stingers”. In 2007 he became a writer for the short-lived science fiction series “The Dresden Files” and wrote the episodes “The Boone Identity” and “The Other Dick”.

G. Mastras in 2008 joined the writing staff of the first season of the TV series “Breaking Bad” as a story editor. He wrote the 6th episode of the first season, “Crazy Handful of Nothin’” and won the “PEN Center USA West Literary Award” for best teleplay for that episode. The whole writing staff of the 1st season was nominated for the “Writers Guild of America (WGA) Award” for best new series at the February 2009 ceremony.

G. Mastras for the 2nd season of “Breaking Bad” was promoted to executive story editor. He wrote the 2nd episode “Grilled” and the 11th episode “Mandala” of the 2nd season. For the 2nd episode he was nominated for the 2010 “Edgar Allan Poe Award” for Best Television Episode. The second season writing staff was nominated for the WGA award for Best Drama Series at the February 2010 ceremony.

For the 3rd season, G. Mastras was promoted to producer and continued in writing episodes. He wrote the episode “I.F.T.”, which he was individually nominated with the WGA Award in the Best Episodic Drama category, and co-wrote “Kafkaesque”. For the 4th and 5th season, G. Mastras wrote another five episodes in which he directed one, the “Dead Freight”. He has been awarded in total ten times and has another fifteen nominations in the end of the series.

G. Mastras is also the author of the novel “Fidali’s Way”, a literary thriller that takes place in the war-torn Tribal Areas of Pakistan and Kashmir, where he has traveled.

In 2014 he wrote the 9th episode “Salamancas” of the TV series “Metástasis”.

George Mastras is now the executive producer of the TV series “Vinyl” and he personally wrote the 1st episode. 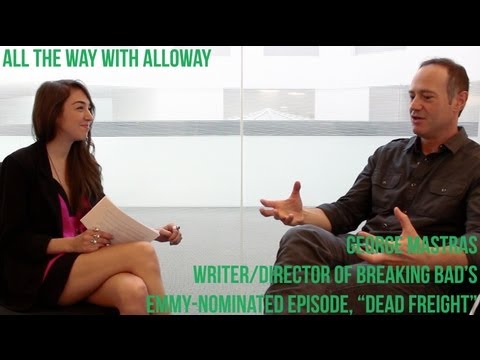