The Rookie tennis player who ascends in the world ranking

Nick Kyrgios is an Australian Malaysian professional tennis player of Greek origins. Together with Thanassis Kokkinakis, he won the Boys’ Doubles event at the 2013 Wimbledon Championships.

He was born in Canberra on April 27th, 1995. His father, George, is Greek and his mother is Malaysian. He has two siblings, his brother Christos is a lawyer and his sister Halimah is an actress.

«I want to be the number one player in the world. That’s my motivation. I’ve never had anything like this happen in my life”, said Kyrgios after taking Rafael Nadal’s world number one ranking and being recorded among the top 8 of Wimbledon.

During his school years, Kyrgios was a promising basketball player, before making the decision to focus on tennis at the age of 14. Two years later he gained a full scholarship at the Australian Institute of Sport, where he had the opportunity to further develop his tennis skills.

At the age of 15, he won the first ITF junior tour title in Fiji in 2010 and one year later he made his debut at the Australian Open.

During 2012, he won two Junior Grand Slam titles and rose to world number three. In 2013, he gained the number 1 junior ranking, by winning in the Traralgon International final.

Later in 2013, he played against Thanassis Kokkinakis in the Junior Australian Open and won his first junior grand slam title.

During the same year, Kyrgios and Kokkinakis won the Boys’ Doubles event at the 2013 Wimbledon Championships.

In 2014, ranking 144th at the time, Kyrgios took Rafael Nadal’s world number one ranking and was recorded among the top 8 of Wimbledon, a victory that ranked him 68th in the world. 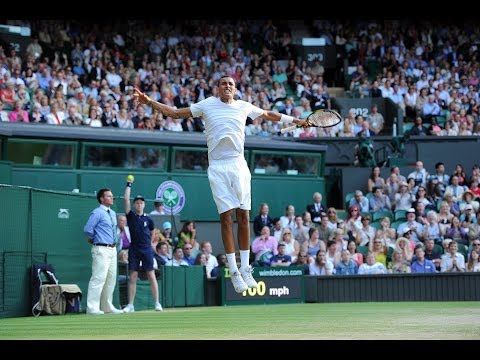