Karolos Koun, the great art creator and educator of the theater, had been awarded many times as a man of letters, arts and sciences, while his relationship with ancient drama wrote one of the greatest chapters in the history of the new Greek theater.

He was born in Bursa, Asia Minor, on September 13, 1908, by Melpomeni Papadopoulou and a wealthy merchant and cosmopolitan, half Greek-Christian and half German-Jewish, Errico Cohen. 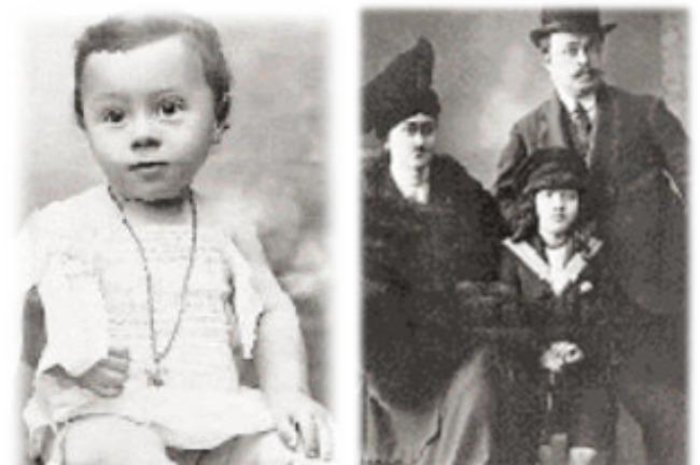 His parents were often absent from home, and at some point they divorced, resulting in Karolos being an only child growing up in an urban home with teachers, a German-speaking governor, a pope and a piano teacher.

From a very young age, Karolos Koun began to unfold his artistic talents, forming melodies on the living room piano, cutting patterns from his mother’s fashion magazines and making theater patterns. Living room furniture created the backdrop of his imagination, with armchairs becoming rocks and sea carpets. Even more, he liked and enjoyed watercolor painting. 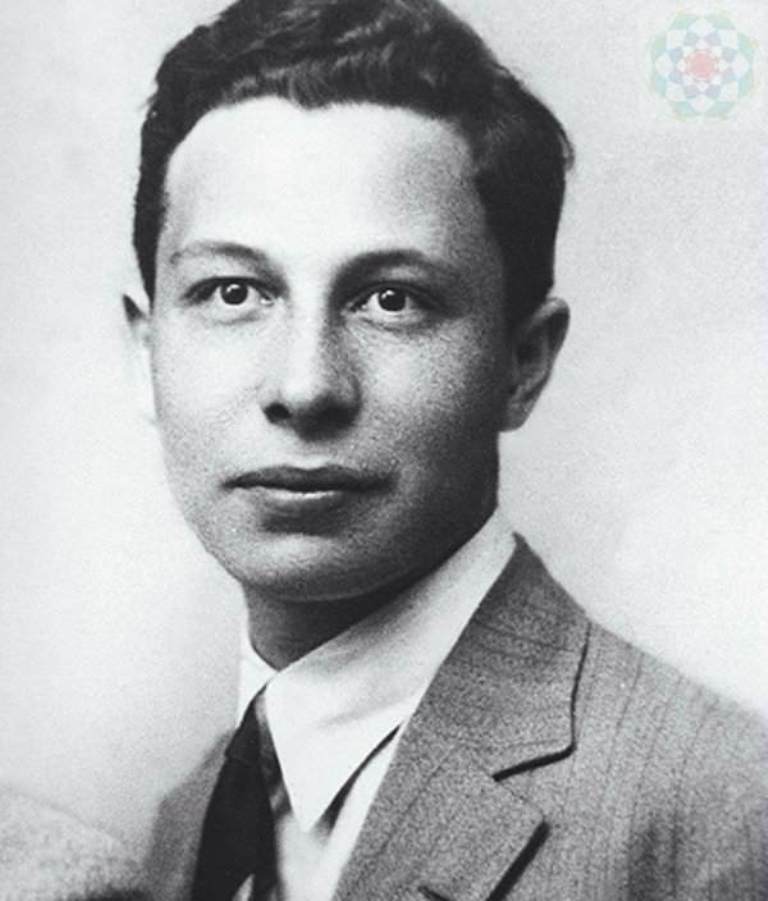 He spent his teenage years at the American Roveretian School (boarding school)  in Constantinople, with children from the Balkans and a Greek minority which, after the Asia Minor Disaster, was deprived of the learning of its mother tongue.

He graduated Highschool at the Robert College Theater Club, where apart from participating in plays, notably in female roles, he also officiated as secretary. 1928, the year of his graduation, was a time when things had changed in Istanbul when even his relatives no longer lived there. 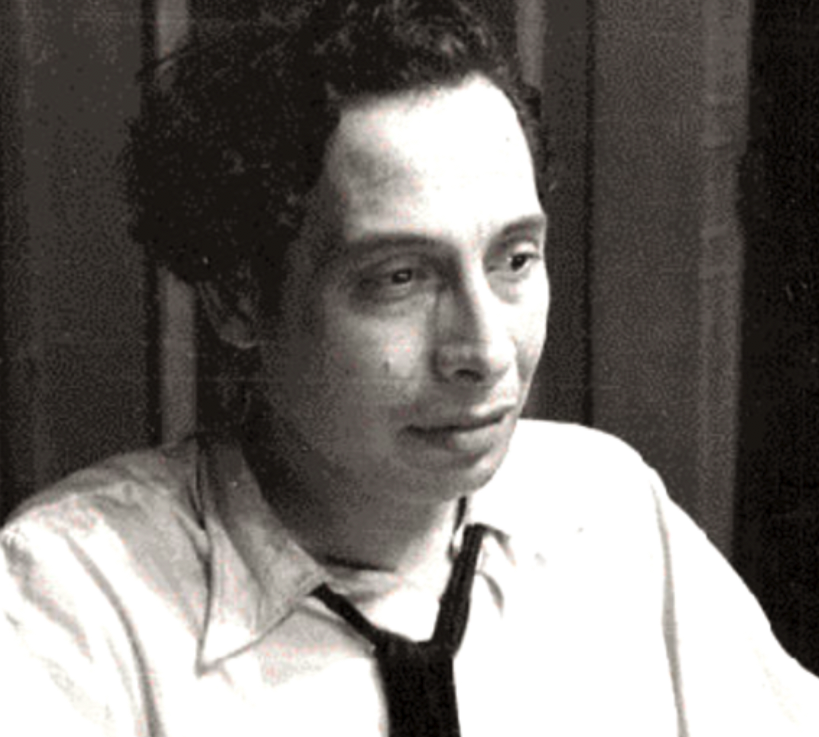 So, the same year, he traveled to study aesthetics at the Sorbonne University, and in 1929 settled with his mother in Greece. He was hired as an English teacher at the Athens College, where he began making his first plays with his students, in small sketches he wrote. At the same time, in the evenings, he taught English to the National Bank Association to support his finances, as his father was financially broke after the war.

In an effort to bring back the demand for a return to the Roman scene in the winter of 1933, he founded, along with Yannis Tsarouchis and journalist Dionysios Devaris, the  “Folk Stage”, which collaborated with various casts. 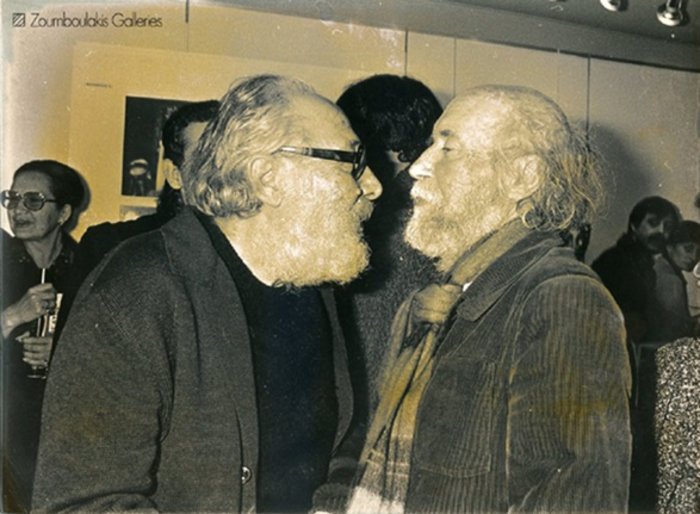 From the Drama School, housed in an abandoned dressing room of the Municipal Theater, the core of the cast emerged. His first appearance as a director was at the “End of the Serif’s Journey” with his students from the College, and later, when he presented works by Aristophanes (Birds, Frogs, Cyclops) and Shakespeare (Dream of a Summer Night).

From his first filmmaking attempts at amateur shows, his innovative look and keen desire to get separated from the practices that had been in use until then were revealed. A more striking example is the work of the Cretan theater “Stathis”, in which a popular Greek populism emerges. Koun respected the Greek tradition, which was alive both in the upper-middle class and in the lives of ordinary people, whose morals and customs were closer to the East than to the West, and sought to create a theater of nationality. 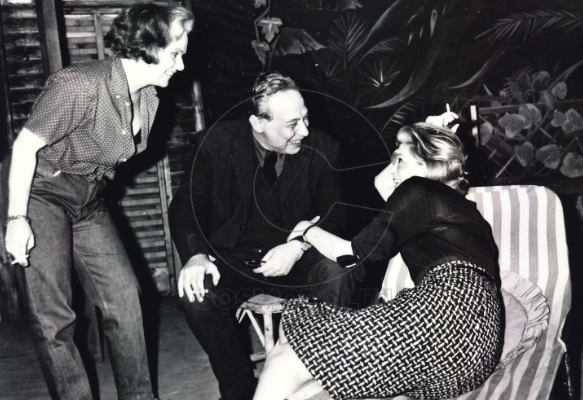 At the opening performance of Erofili of Hortatsis, on April 20, ’34, at the Olympia Theater, Koun placed the actors according to Kontoglou’s hagiographies and illuminated them as candlelight.

In 1938, he resigned from the College and worked with the likes of Miss Katerina and Marika Kotopouli. But his dream was to create his own permanent, dedicated team of actors who would view theater as a function, not as a profession.

This dream came true in 1942, when he founded the Art Theater in the darkness of the German occupation, where he put up George Bernard Shaw, Pirandello and after the deliverance, for the first time in Greece, Lorca, Tennessee Williams, Miller, etc. In the same year, he founded the Drama School of his theater, where the most important post-war directors and actors apprenticed. 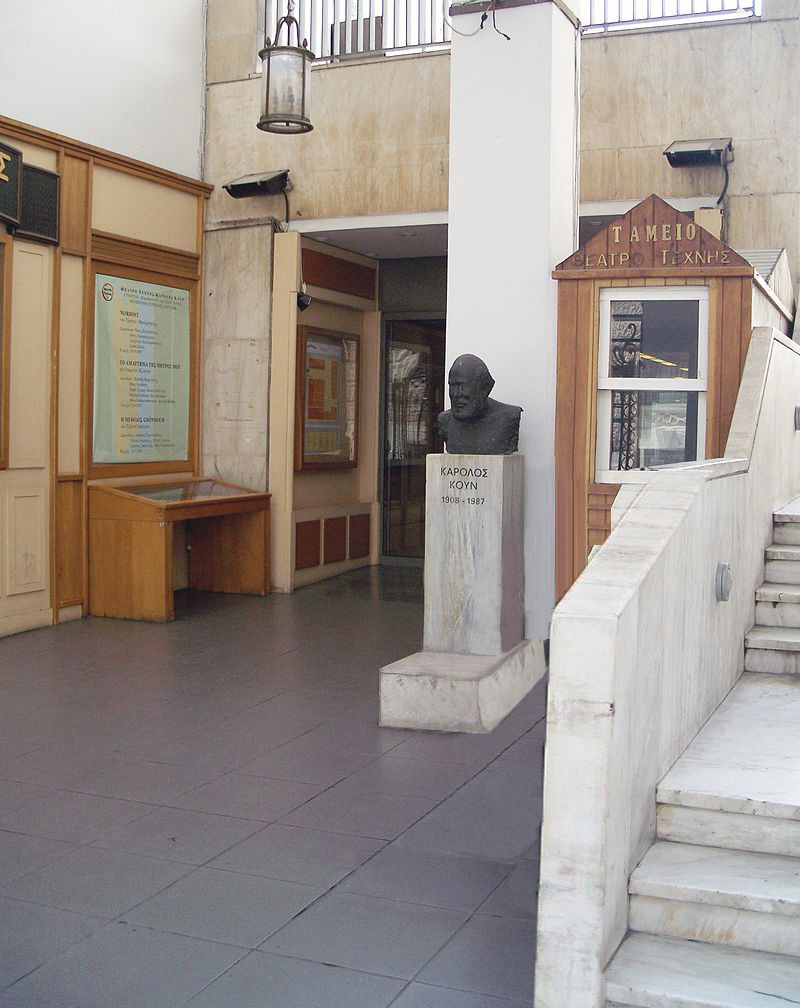 In fact, in the courtyard room of Zoodochou Pigi 9 street, he began rehearsals at Ibsen’s “Wild Duck” with students of the School and with the same director and actor – him. He gave his performances in various theaters, mainly in the Costas Mousouris Theater and, in the summer, in various outdoor cinemas which were offered to him.

The Art Theater was originally established as a “theater of the ensemble”, where all who participated in it, from the director and the protagonist to the technician and extras, were considered equal and were paid almost equally. An equally important part of this philosophy was the School which was constantly supplying with live material the performances of the Art Theater. 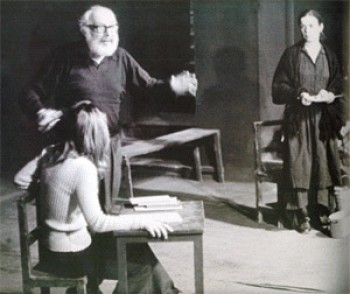 With one teacher and one director, the community of artists with common principles and common language – as they were encountered only in other European countries, but not in Greece – had a compass in those early years, Stanislavsky, co-founder, actor and director of the famous Moscow Art Theater.

The aim of the team was to study and analyze external reality in subjective terms. As the Master emphasized in the lecture of ‘43: “The purpose of our art is not the object but the meaning we give it.” So, with the text in hand, the actors came to rehearsals, which were carried out “in a climate of fever, urgency,” as the actress Maya Lyberopoulou writes, “and they were always rich, dense, without breath.” 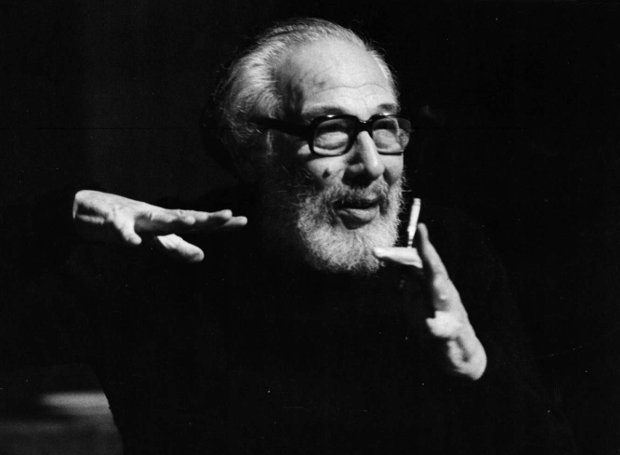 In the same lecture-manifesto, he said, “We say mission and we do not fear the word, we are never bothered by the idea, because only with complete faith, with total sacrifice of ourselves in a higher idea can we acquire the power, the entity, and bring on the surface the spiritual wealth that is buried within us for its realization. We have to believe in miracles to become miracles,” resembling a religious leader’s sermon. An impression that is probably not too far from reality, as he believed in Art as if it were a religion.

In 1950, financial difficulties forced him to suspend the theater’s activities. Then he was invited to direct five works at the National Theater: “Henry II”, “People and Mice”, “The Three Sisters”, “Dream of a Summer Night”, “Uncle Vania”, until 1953. The Long March began from 1954, when the great artist re-established the Theater of Art in the form of a circular theater, on his own permanent shelter, in the circular Basement of the Stoa of Orpheus. 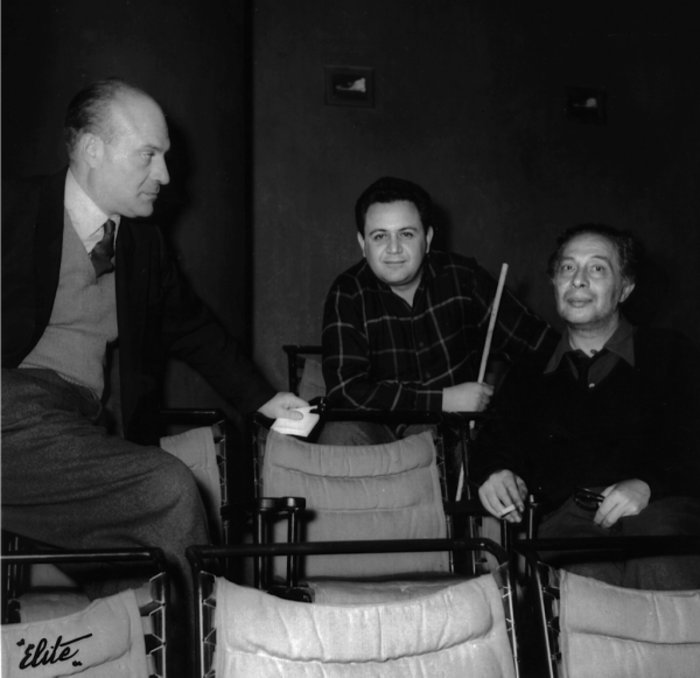 Through his “Basement of Wonders”, under his wise, inspirational guidance, great actors, directors, writers, musicians and stage designers were formed. His children were also his close associates, Floritis, Hadjidakis, Tsarouchis, Stamatiou and Sevastikoglou, as well as most of the actors of the Cyprus Theater.

From 1957, he staged an ancient drama, initially, in his theater, “Pluto” and, in 1959, “The Birds of Aristophanes” in Herodion, considered a scandalous performance because of its pioneering form. Three years later, he continued at the Festival of Nations in Paris, the “Birds” of sacrilegious Koun shared the first prize with the National Theater of Greece, acquiring dithyrambic reviews. 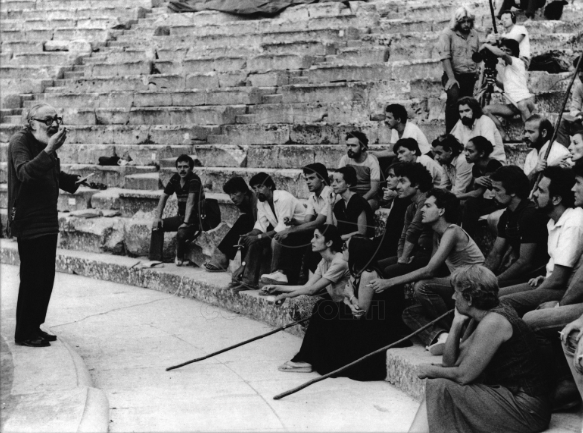 In addition to his old writers, he introduced new students to foreign post-war theater with his students, and also presented works by many young gifted Greek writers while because of Koun Greek audience was introduced to modern foreign dramatic currents, the “Paralogue” theater, Ionesco, Max Frys, Beckett, Alby, Weiss, Arable. 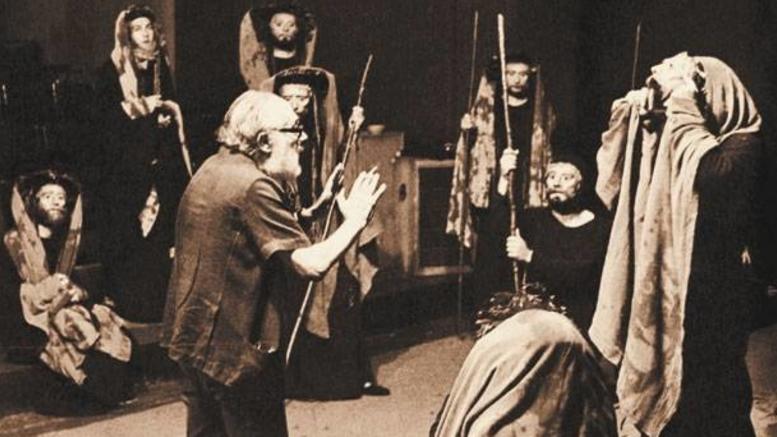 Although he had gained recognition and acceptance in Europe, he had rejected all suggestions made to direct in the major theaters in Europe and America. The only time he accepted was in 1967, when he directed “Romeo and Juliet” in Stratford, an invitation from the Royal Shakespeare Theater in England, making Koun the second director within thirty years of being invited to direct in the theater. The English review characterized the performance as the best Shakespeare of the last decade.

Karolos Koun was a leading figure, extremely rigorous, demanding total giving, but at the same time remaining open to any possibility – he didn’t have preconceived judgments. “Amidst the rehearsal, he created the atmosphere, shaping faces, improvising” Rennie Pitaki, one of the actresses the great Master had singled out. 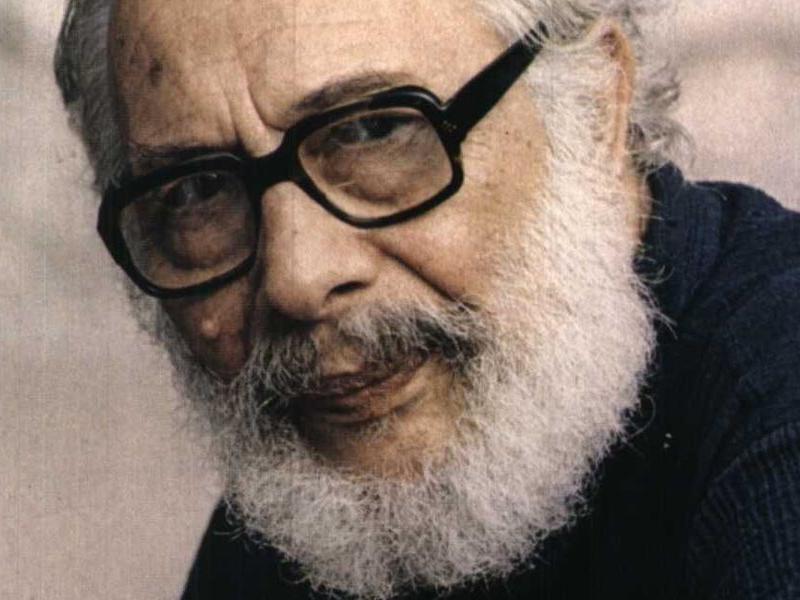 “His method was hypocritical, obstetrics, he didn’t” show the roles requiring copying. Depending on the repertoire, the directions changed. In atmospheric works his interventions usually concerned a detail in your step, the look, the way you sat, your shoulder turning. “I don’t see the darkness in your movement …”, “I don’t hear his voice in your hair …” he said” Mrs. Pittaki added.

He came to the Conservatory on Phidiou Street bleary-eyed, Asimakis Panselinos recounts, but as soon as the rehearsal began, his eyes woke up and glowed with tension. He always had a piece of tahini halva in his pocket, which he crushed with skill, without lifting it, and reinforced the actors, who because of starvation couldn’t go through his rehearsals. As far as his teaching was concerned, he was unforgiving. “Once Helen Hadjiargiri had a breakdown and started crying because she couldn’t find the tone of an expression that Karolos had repeated for maybe 50 times. He has cooly waited for Helen to calm down in order to repeat it for the 51st time.” 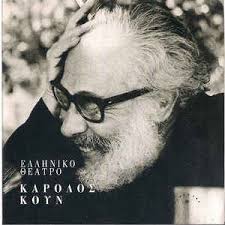 He demanded total devotion from his “followers”, as he was completely devoted to them and his vision. He set high goals on the artistic path without compromise, far from any business logic that then prevailed in the marketplace, and against the dominant urban theater model. 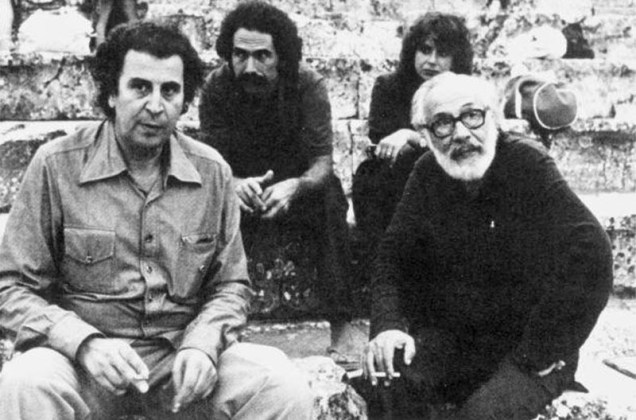 In 1980, the Art Theater entered Epidaurus with the grand performance of Aeschylus’ Oresteia trilogy, while in the ancient drama he scoured Europe and always returned to Greece. For Koun, the ancient drama was a field of constant search and conflict, not as dead and monumental, but as a living, present-day, nationwide affair. That is why he disliked the pompousness, the seriousness and the antiquity that accompanied most performances of the era, according to Eleni Varopoulou, a theatrical and art critic.

In 1984, the Greek state granted him a place in Plaka for the construction of the K. Koun theater and, in early 1985, he acquired a second theater in Plaka, with the help of the State. 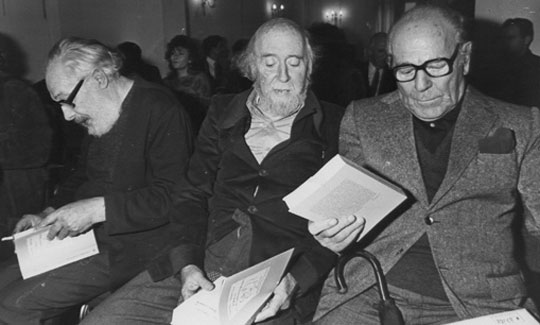 When he began to breathe financially and enjoy the fruit of 50 years of hard work, his health was now in jeopardy. On February 8, 1987, he was admitted to the hospital with severe chest pain. He passed away of myocardial infarction on the night of February 14, just before the premiere of Lula Anagnostakis’s “The Sound of the Gun”, which he had just begun directing in “The Underground”, at the Art Theater.

“Today I don’t know exactly what my dreams were,” he had said, “My dream was theater … What I want is for the “Art Theater” to continue when I step down. There are assets, my old partners who can keep it. There are others who have left us, I don’t hold a grudge, they are doing what they think is right … What I can say is that I will feel that something has been done, that the effort has not been wasted, only when that job stays. It is the only criterion of whether I have achieved the goal or not. ” 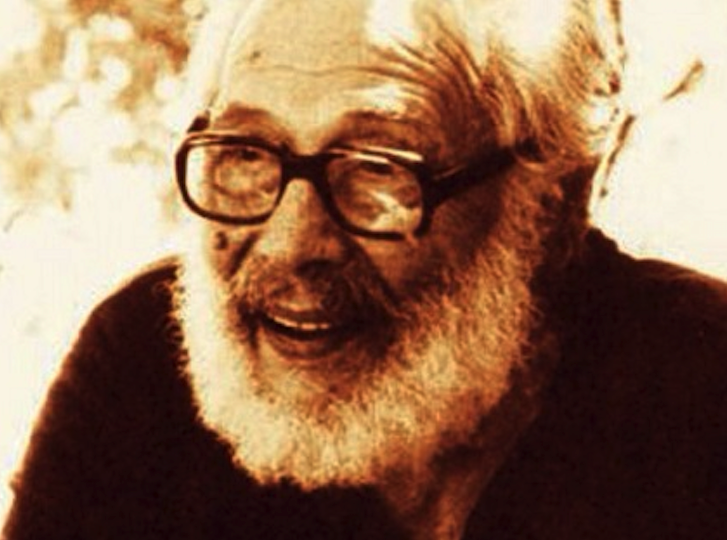 With his will, published a few days after his death in February 1987, he bequeathed the title of the Art Theater to G. Lassanis, M. Kougioumtzis and G. Armeni, urging them to continue his work at the Art Theater K.Kun.

The Grand Master was honored with the Phoenix Medal, the Academy of Athens Silver Medal and the National Theater Award, while the Karolos Koun Prize was established in his honor.