Kostas Karyotakis, one of the greatest Greek poets and prose writers, is considered to be the main expressionist of modern lyric poetry, with his works having being translated into more than thirty languages. His poetry is part of Greek and international education, when hundreds of works and books have been written for his work and dozens of special conferences have been held.

Born in Tripoli, Arkadia, on October 30, 1896, as the second child of Georgios Karyotakis, a prefecture engineer from Karya Korinthias, and Aikaterini Skaianni from Tripoli. In fact, her house, where the poet was born, houses today the University of Tripoli. He had an one-year-older sister, Nitsa, and a younger brother, Thanos, who was born in 1899. 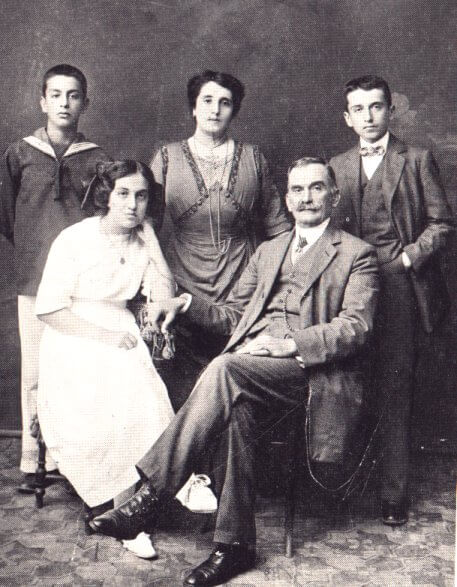 Because of his father’s work, the Karyotakis family was forced to change their place of residence often so that the poet spent his childhood in Lefkada, Argostoli, Larissa, Patras, Kalamata, Athens and Chania, where the family stayed until 1913 because of his father’s constant transitions and from where he graduated in 1913 from the local high school with a degree of “very good”.

His writing skills started to appear from an early age, as since he was sixteen years old he published poems in children’s magazines and participated in literary contests, such as the short story contest of the children’s magazine “Εdification of Children”.

In 1914, 18-year-old Kostas Karyotakis got in the Law School of Athens and since the very second year he started publishing poems in popular magazines as well as in newspapers such as the “Acropolis”. At the end of 1917, he received his degree in Law with “very good”, when his father was fired from the state as an anti-Venizelist.

In 1919, he obtained a lawyer license and, while for a time he tried to practice the lawyer’s profession, the lack of clientele led him to look for a civil servant’s job. Thus, he was appointed Secretary of State A in Thessaloniki, in order to be close to his parents, who then resided in the co-capital. He was appointed in various public services, including the prefectures of Syros, Arta and Athens, fact he did not enjoy.

To avoid the transferring, he moved to the Ministry of Welfare and Social Understanding, to the Athens Central Office. In the Ministry, he showed a major work on proposing laws concerning public health, but this work was not implemented due to the dictatorship of Pangalos.

In the Prefecture of Attica, he met the poet Maria Polydouri, where they were both temporarily working, in 1922. The two young people fell in love, but their relationship did not last, as Kostas Karyotakis found out that he was sick with syphilis, an illness then incurable, which also constituted a social stigma, and separated with Polydouri. She proposed to him – suggesting not to have children – but he refused. 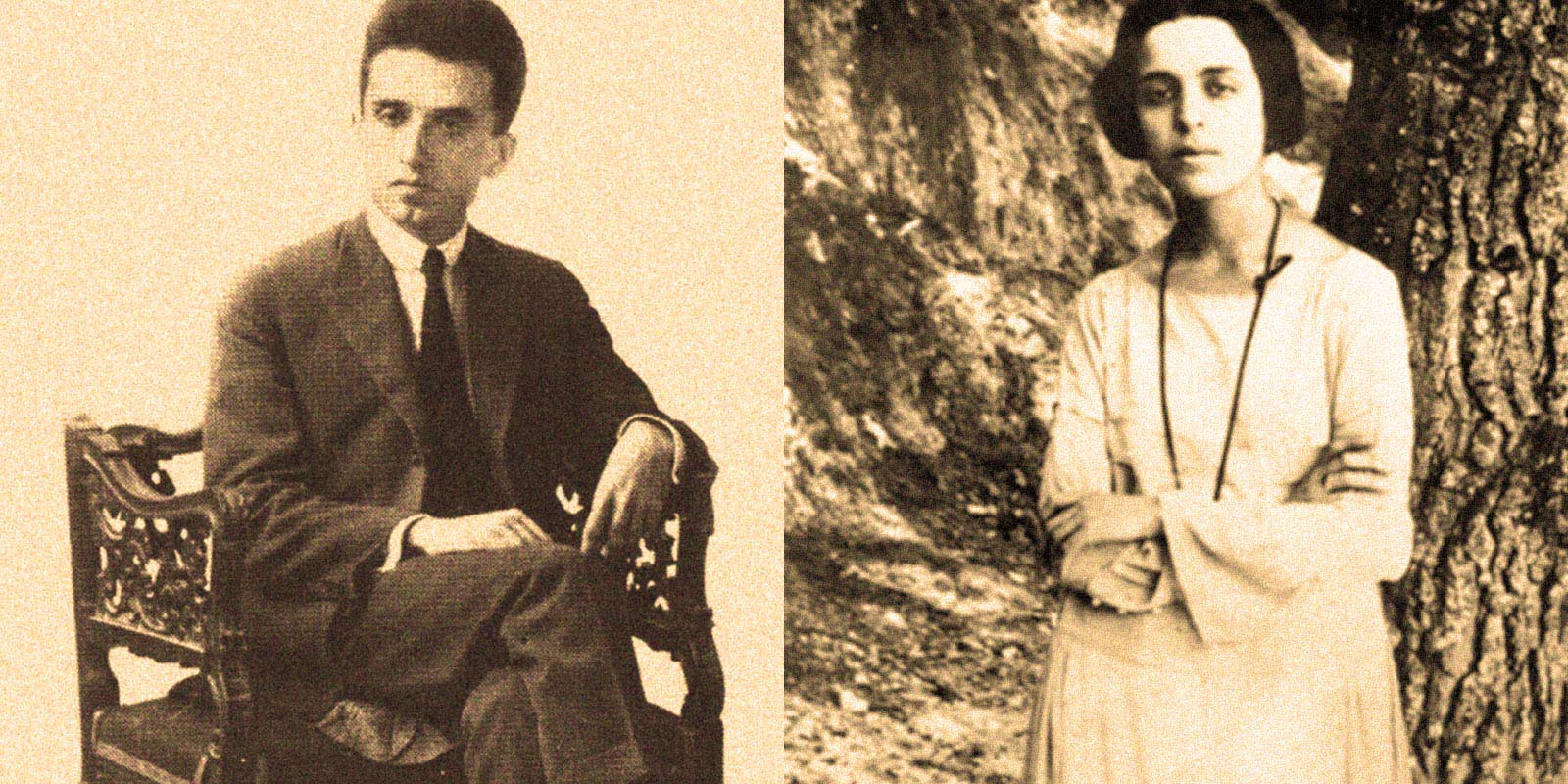 For many years, the poetess was best known for her love affair with K. Karyotakis rather than her poetry, since her love passion for him runs in all of her works. But she was not only talking to her beloved but also to his poetic work. In 1926, in Paris, Polydouri suffered from tuberculosis and was hospitalized in Greece at Sotiria Hospital, where Karyotakis visited her in 1928.

In 1927, he published the poetry collection “Elegy and Satyres”, while in 1928 he had already started being involved in syndicalist actions. As a civil servant he was elected, on January 13, 1928, secretary of the Union of Public Employees of Athens and participated in strike marches, which led to his transfer to Patras and Preveza. His job was in the Prefecture of Preveza, at the Office for the Occupation and Restoration of Refugees, when George P. Georgiades was the prefect.

Kostas Karyotakis as the lawyer of the Prefecture had the task of drafting and controlling the titles of ownership of the parcels of distribution to the refugees of Asia Minor. His correspondence with his relatives during this period highlights Karyotakis’s despair for the provincial life and the smallness of the local community. 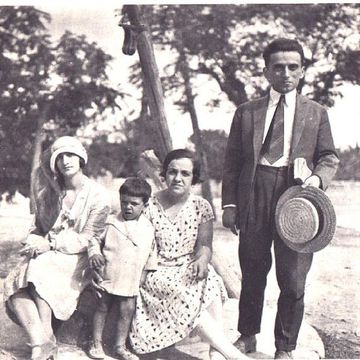 With his sister, a friend of hers and his nephew, in Preveza, summer 1927.

Karyotakis lived in a very troubled time, which marked him. Balkan wars, World War I, the expansion of the country’s borders, the Asia Minor disaster and the collapse of the Great Idea, a mass influx of refugees, political corruption, widespread impoverishment of the popular classes, miserable working conditions, intense strike struggles etc. Unemployment only in Athens, in 1928, reached 55%. 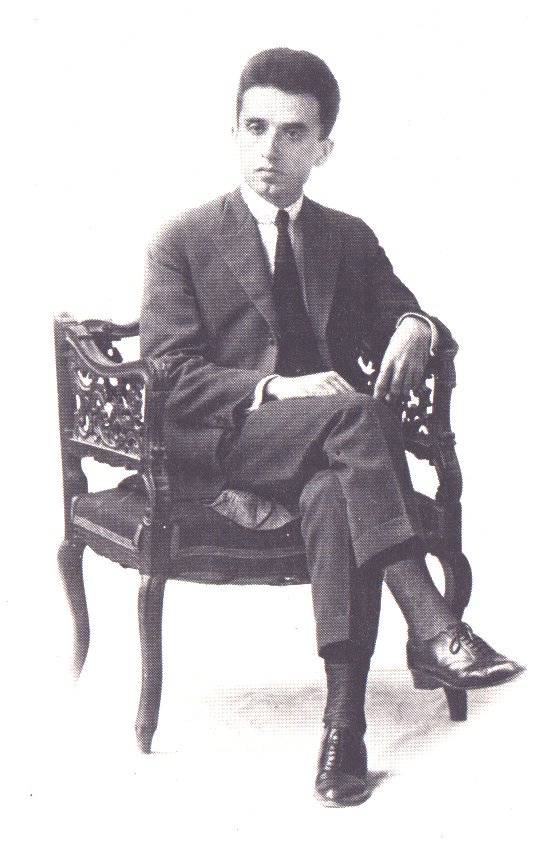 In such a climate, particularly bleak for the younger generation, many young people with concerns, seeing an undefined future, turned to spiritual life and search. One of them was Karyotakis, who with the pessimism that distinguished him, coupled with the lack of a point of support and a new social orientation, expressed all this inner drama of a portion of people of that time and “the pain of a changing world” through his poems.

On July 21, 1928, the great Greek poet put an end to his unbearable life. In the documentary by Freddy Germanos, the Mayor of Preveza in 1977-1978, Iraklis Doutsis, described that two hours before his suicide, around 2.30 pm, Karyotakis went to the then café “The Heaven Garden”, where he ordered and drank a sour cherry juice. The coffee maker was surprised then, because the poet left him a 75-drachmas tip, while the beverage’s price was 5 drachmas.

He asked for a cigarette to smoke and a paper, where he wrote his last notes, which were found in his pocket. At the end of these notes, he wrote, among other things, “I recommend to those who intend to commit suicide, avoid the method of drowning if you know how to swim. I suffered 10 hours in the sea and I did nothing!” 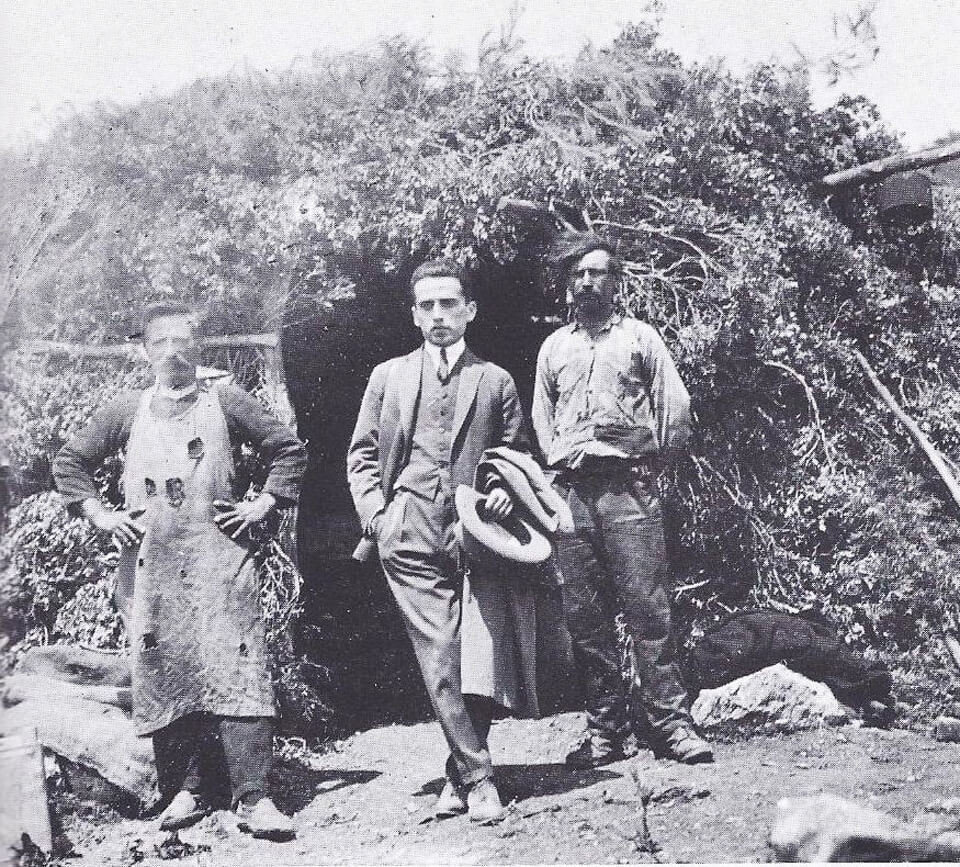 The son of the gun-seller, Ioannis Anagnostopoulos, a civil engineer, states in Freddy Germanos’ documentary that “the day before the suicide, Karyotakis purchased a pistol from his father’s shop, with which he returned within a few hours complaining that it was faulty while he had forgot to deactivate the safety. ” This was explained as an intention to commit suicide on the same day. This pistol is of the Pieper Bayard type 9mm type, was granted by the descendants of the Karyotakis family and has been exhibited since 2003 at the Benaki Museum in Athens (Building A, Vas. Sofias).

In the end, on the 21st of July 1928, at 4.30pm, at the age of 32, Kostas Karyotakis walked from the Vrysoula’s “Heaven Garden” to Vathi in Margarona, a distance of about 400m. He lay down under a eucalyptus and committed suicide with a pistol in his heart. The military police then took a photograph of the corpse that has been published and shows him in a suit, with a straw-hat and his hand with the gun on his chest.

This place is currently the 8th Infantry Division’s Fuel Camp and there is a commemorative marble inscription placed by the Preveza Touring Club in 1970. The plaque reads: “Here, on July 21, 1928, with a sphere in the heart, found peace the poet Kostas Karyotakis “. 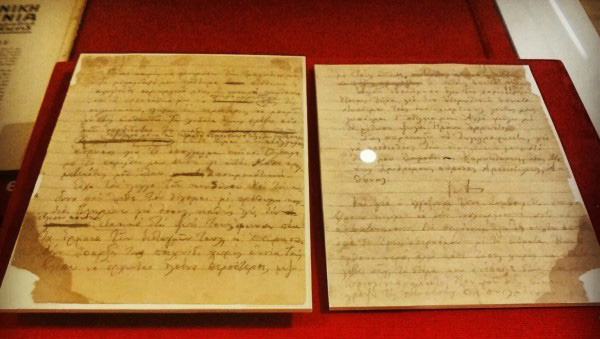 In his farewell letter he wrote in detail, “It is time to reveal my tragedy. My biggest defection was my anxious curiosity, my illusory imagination, and my attempt to know about all the emotions, the most of which I could not feel. However, I hate the act which is bestowed upon me. I only asked for its ideal atmosphere, ultimate bitterness. I’m not the right person for that job. My whole past convinces of that. Every one of my realities were abhorrent. I had danger’s vertigo. And the danger that came, I will accept with a willing heart. I pay for those, like me, who didn’t have any ideals in their lives, always stayed adrift of their hesitations, or thought their existence as a game with no meaning. I see them ever-coming along with the centuries. That’s who I’m talking to. After having tasting all of joy (!!!), I am ready for a ignominious death. I’m sorry for my heavy hearted parents, sorry for my cousins. I’m leaving with my conscious clear. I was sick. If you may telegram, in order to predispose my family, my uncle Demosthenes Karyotakis, the Monastery of Prodromos, the passage of Aristotle, Athens »KGK

[PS] And in order to change the mood. I recommend to those who intend to commit suicide, to avoid the method of drowning if you know how to swim. I suffered 10 hours in the sea and I did nothing! I swallowed plenty of water, but every now and then, I never figured out how, my mouth went up to the surface. Definitely, once, when I have opportunity, I will write the impressions of a drowning man.”

The house that he rented and lived in the last days of his life, Karyotakis in 1928, is located in the Dardanelion Street, in the so-called Seitan Pazar. It is still intact, there is a commemorative plaque and it was inhabited in the 1990s. Karyotakis’ landlady, Penelope Ligouri, a young lady in 1928, told in Freddie Germanos’ documentary that “at home, Karyotakis had no books but his own manuscripts which, after his death, I didn’t know were poems and threw away”. 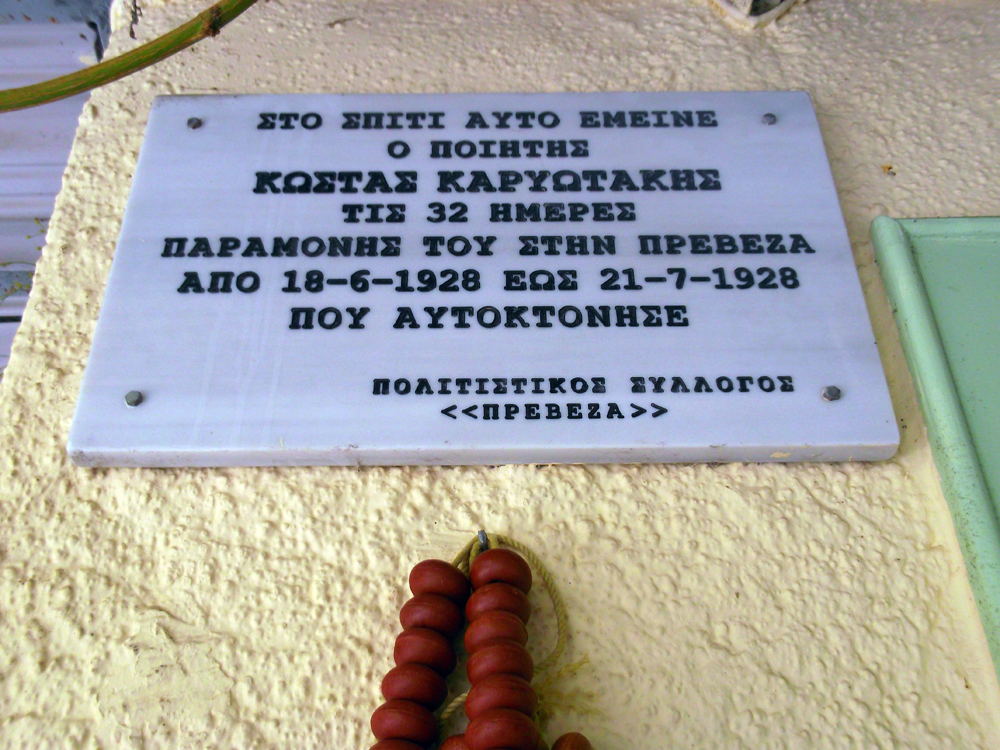 One reason that seems to have pushed Karyotakis to suicide is syphilis. The professor of the Aristotle University of Thessaloniki, George Savvides, who had the largest record for Modern Greek Writers, in contact with the poet’s friends and relatives, was the one who revealed that Karyotakis had syphilis, and that his brother, Thanos Karyotakis, considered that the disease constituted an insult to the family.

In his study of Karyotakis, George Makridis asserts that “the poet committed suicide in Preveza, not because he was pressured by his transfer there but fearing to be hospitalized in a psychiatric clinic, which was the case with all the syphilis-patients in the final stage of the disease at that time”. In fact, wanting to strengthen his argument, he said that “it is not possible for a heavy depressed patient to joke in his death letter.” However, according to the modern definition of clinical depression, the poet surely suffered from the disease. His work, long before he learned that he suffered from syphilis in the summer of 1922, his life and death constitute strong evidence for this.

Poet and prose writer, perhaps the most important literary voice which the generation of the 20’s introduced and the first who introduced elements of modernity in Greek poetry, Kostas Karyotakis, influenced many of the next poets such as Seferis, Ritsos and Vrettakos. His suicide created a literary fashion, Karyotakism, which flooded Modern Greek poetry. 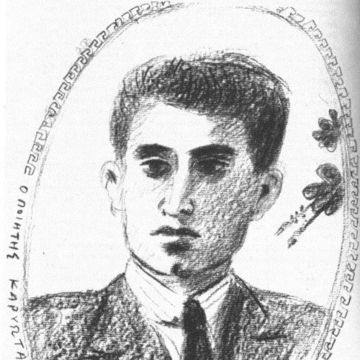 Poetry which has no trace of philology, sensuality and courtesy, poetry that emits the sense of vain, lost, anti-heroic and anti-idealistic. Karyotakis writes poems about the absurd, the insignificant, even the ridiculous, as a protest that turns to sarcasm.