Dimitris Mytaras, an internationally acclaimed artist, professor of the Athens School of Fine Arts and academician, was one of the most important painters and set designers of the 1960s, and he was also a poet, talented costume designer, illustrator, designer of decorative performances and charismatic teacher.

He was born on 30 June 1934 in Chalkida and was the second child of the barber, Vassilis Mytaras, with whom he grew up. He painted as a child everything he saw around him and the pictures he saw were those of war, the bombing of the planes. 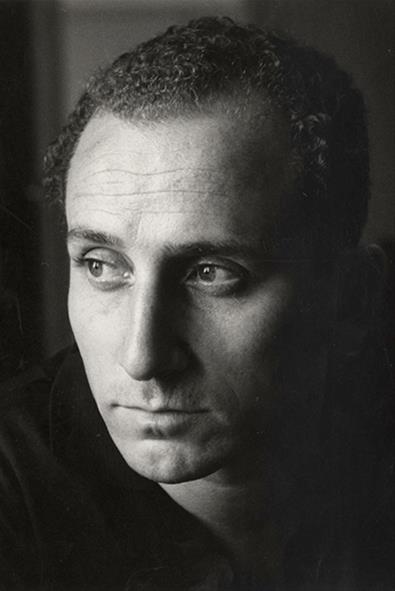 He had said in an interview that he did not have pleasant memories of his childhood and the Occupation he described as “hell” while he missed his mother, Eleni Goutou, who he did not get to meet as she died a few days after the birth. It was her from which he inherited the inclination to painting and Dimitris Mytaras kept her sketches like a treasure.

His first exhibition was in his father’s barbershop, who was proud to show his son’s paintings on the walls. With his minimal artistic skills and despite the opposite view of his family, he left Chalkida in 1953 to settle in Athens and study at the School of Fine Arts where he was admitted. He studied painting for four years, having as his teachers Spyros Papaloukas, whose teachings marked him, and Yannis Moralis, with whom he worked closely and developed mutual sympathy. During his studies, he received numerous awards and commendations. 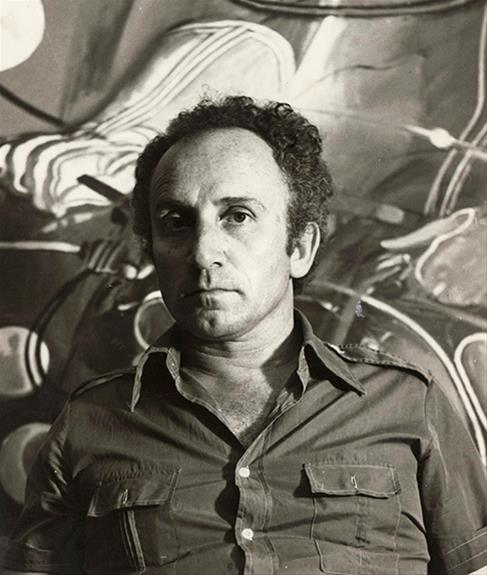 In 1957, he exhibited his works for the first time in Athens, in the context of the 5th Panhellenic Art Exhibition at the Zappeion Megaron, and while already known by group exhibition, organized his first solo exhibition at the Zygos gallery in 1960.

Ιn 1961, he married his classmate from the School of Fine Arts, Chariklia Triantafyllou, who he lived with throughout his life and who he loved, valued and respected infinitely until the end. On their wedding day, the couple left for studies on stage design at the Ecole Superieure des Arts Decoratifs, as well as on interior decoration at the Metiers d’Art in Paris, with a scholarship from the State Scholarship Foundation. 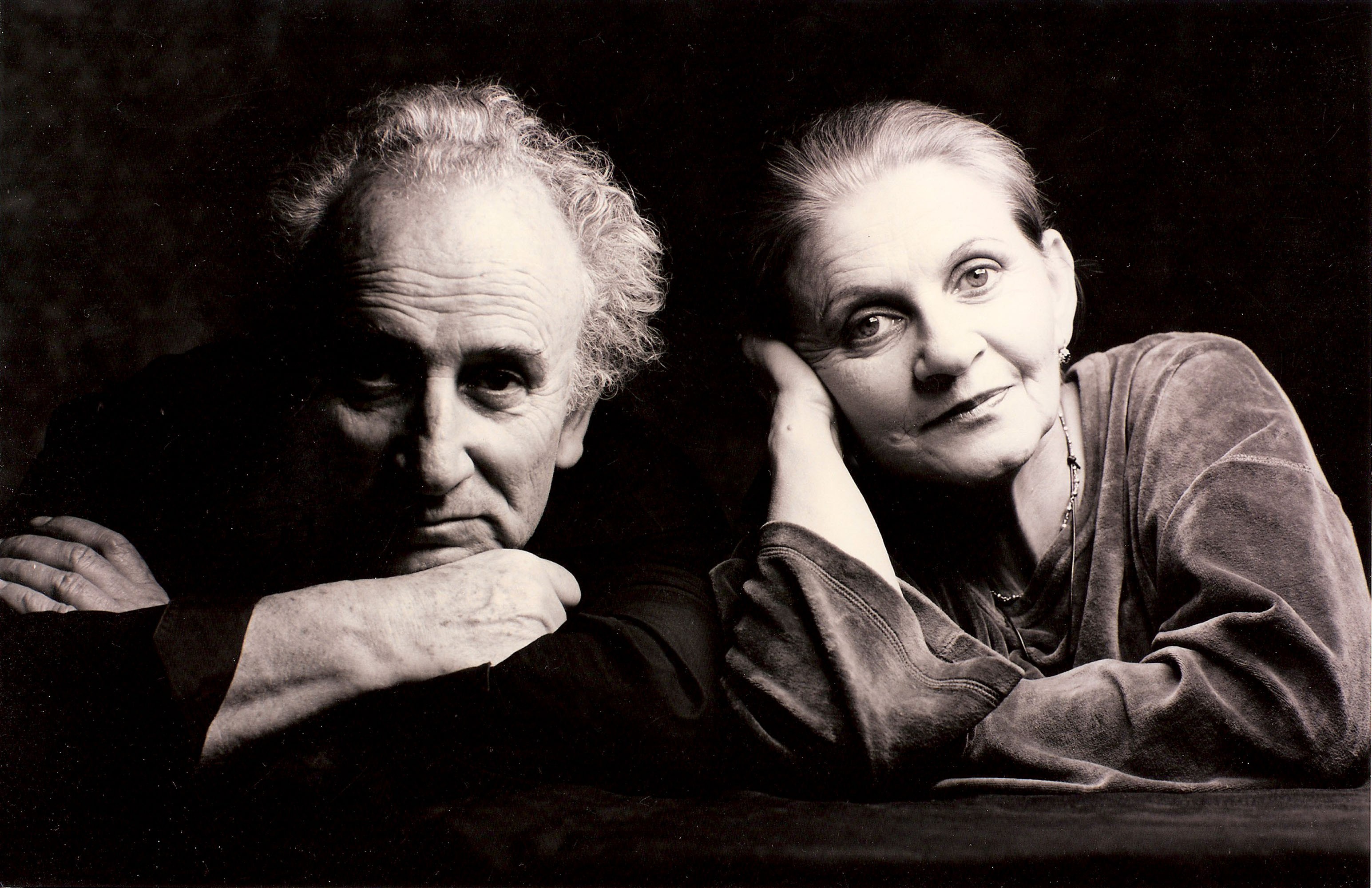 Returning after three years, he edited the stage props and costumes of great performances, works of great directors and theatrical writers after he became acquainted with stage design and costume through the performance “Tonight we improvise”, by Pirandello, directed by Dimitris Myrat.

He also collaborated with the National Theater of Northern Greece (NTUA), the National Theater, the Karezis-Kazakos Theater and the Art Theater, Karolos Koun and his students, with very significant performances such as Büchner’s “Woyzeck”, “Birds” directed by Mimi Kougioumtzis and others. He was “not a man of the theater,” his wife said, but being involved with it “he got away from the atelier’s loneliness.” 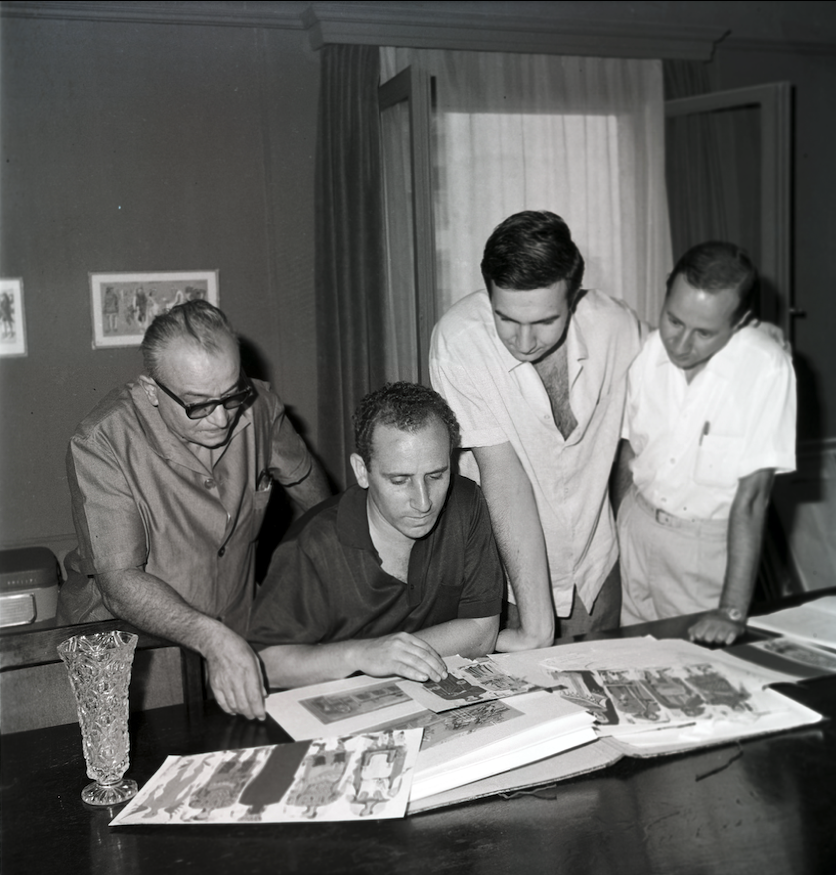 From 1964 to 1972, he taught interior decoration at the Athenian Technological Institute (Doxiadis School), which he reorganized with his wife while, in 1973, Aristeidis was born, the only child of the couple. Since 1975, he has been a professor and began teaching at the Athens School of Fine Arts and. From 1982 to 1985, he was a rector of the ASCR, where he resigned from both to denounce the precarious conditions of the school and to declare his opposition to the mobilizations of students who refused to attend the school program.

Along with his work as a professor, in 1978, and with the help of the municipal authority, he founded the Chalkida Art Workshop in his hometown, which, under the artistic direction of his wife, is developing important teaching and cultural activities. 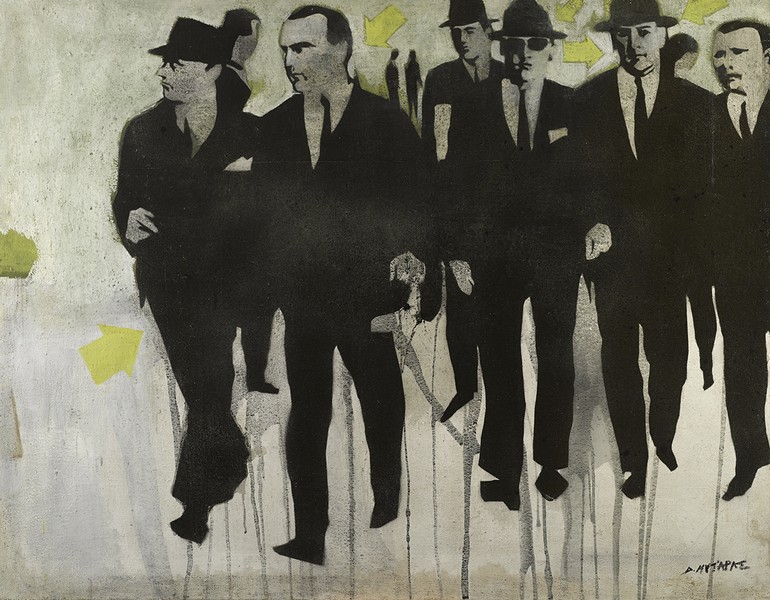 In 1985, Mitaras was awarded the Gold Medal of the City of Chalkida, and in 1989 he published his book “Do not talk a lot about art”, with various texts which had been published in the past. He often expressed his concerns through writing, prose and poetry. In his writings, one can see how he treated and judged social things, his thoughts that were often sharply expressed, but always with humor and often with self-sarcasm. He published a series of cover sheets, which were gathered in a book titled “The Dog Bites” (1997).

Dimitris Mytaras’s work, both painting and stage design, is extensive. He had participated in a number of individual and group exhibitions in Greece and abroad (Alexandria, Paris, São Paulo, Frankfurt, Bologna, Florence, Venice, Genoa, Belgrade, New York, Stockholm, Tokyo etc), he had painted murals in factories, hotels, for the Union of Greek Shipowners, for houses, for the Mitera Hospital, and even for an Athens night club, he had painted carpets, books and cartoons, and his work “Dexileos” was placed at Dafni Station in the Athenian metro. 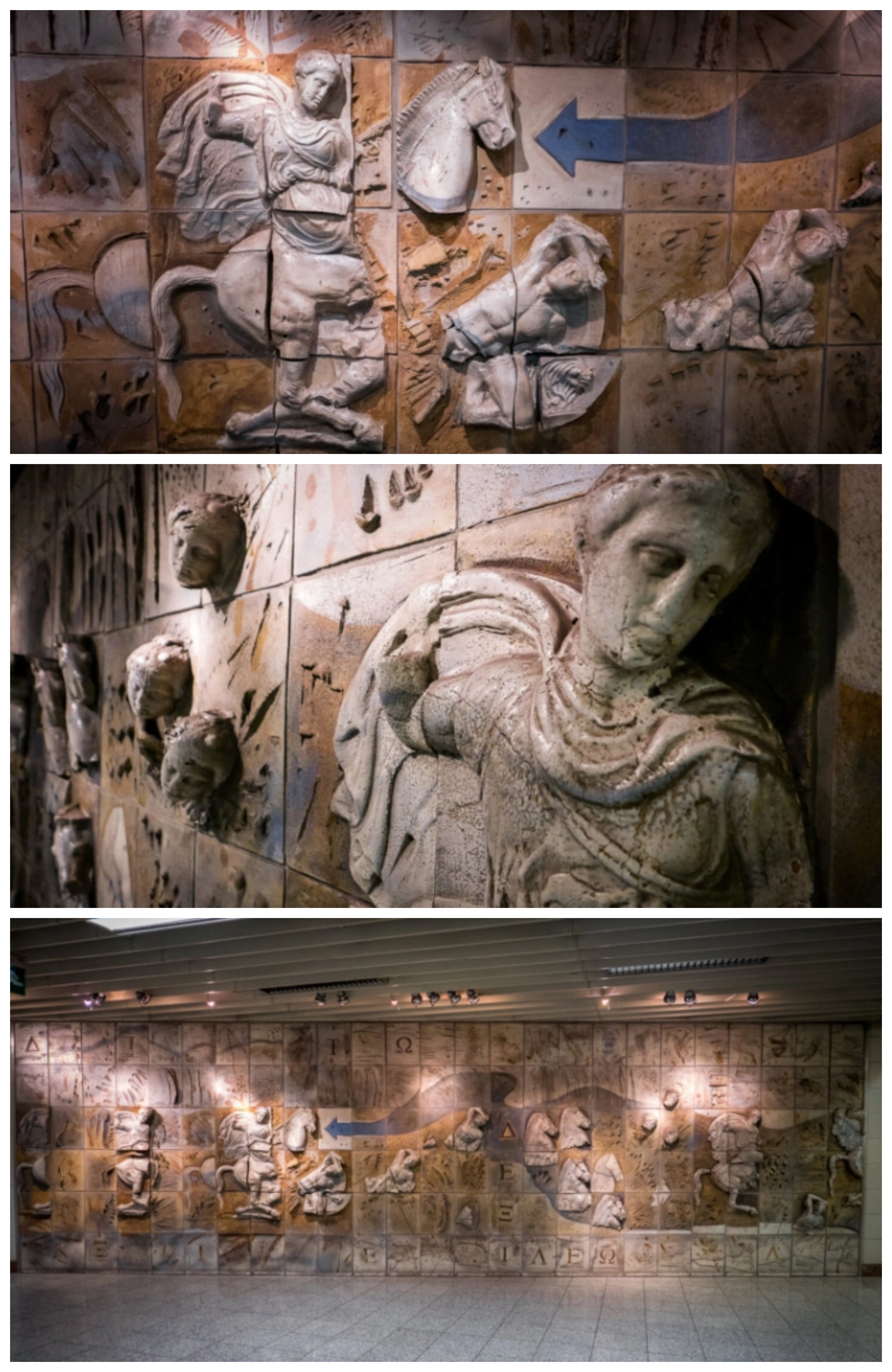 For much of that work, he had been criticized, but he did not bother with what others said, he felt as an artist for the crowd, and he liked his works going anywhere he could share his art with, whether it was a house, business or public space.

He was a multi-tasker character who, as he had admitted, could not do anything else than stretch out and do many things. He did not deliberately do it and never got tired of it. He only got tired by the “various” things that happened, “Those things which are constantly around and have demand from you all the time. Contact with people is so tiring for me. Everybody wants something from you, everybody demands something from you and all these things really tire me.”

As he has said, the message that passed through with all his art was the indignation and that it was evident in the writing of his painting. Without the indignation “I can not finish a job, I can not paint”. He has written many texts that were published and they were less about art than about social issues, “Whatever bothers me I’m trying to exorcise. That’s why in the dictatorship, I did a job that was against it and I did not understand how dangerous it was. To the question “Where is your work taking you?” he answered that it took him wherever it wanted. “I have no purpose, I can not paint with a schedule. Whatever bothers me I sit and paint it. That’s right for me. ”

After numerous exhibitions in Greece and abroad, in 2001, the President of the Republic, Constantine Stephanopoulos, awarded him the Order of the Phoenix, and four years later he published his first poetry collection “The Night”. 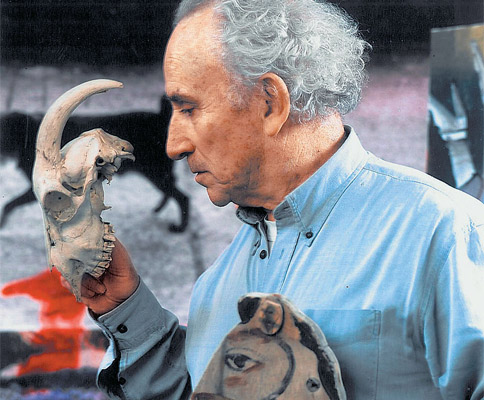 In 2008, he was elected a full member of the Academy of Athens. Two years later, a disease started to appear related to his eyes, which physicians diagnosed as optic neuropathy. He lost 90% of his vision within a few months, although doctors reassured him that it would return after three or four years, something that never happened.

The Foundation for Visual Arts and Music, Vasilis and Marina Theocharakis, organized the exhibition “Dimitris Mytaras – Narrating Personalities”, where he also presented his work for Panagia Katafygiotissa (2006). During the inauguration, he suddenly left the exhibition area because of his weakened vision, which increased his hearing sensitivity. 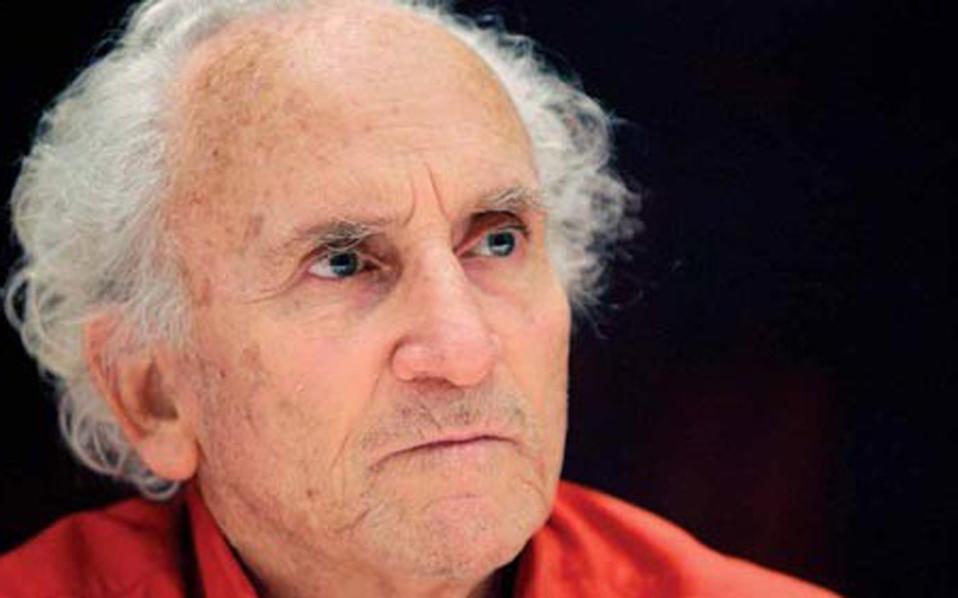 In 2010, he published his second poetic collection “Engr’s Violin”. The Academy of Athens, due to its strict internal regulation, was forced to delete him after repeated absences due to the health problems he faced. Although he retained the title of a full member, he felt deeply wounded by this decision. A year later, Harvard University, which was honoring the Honoring Greek Culture Award, awarded him a prize in the Painting category. 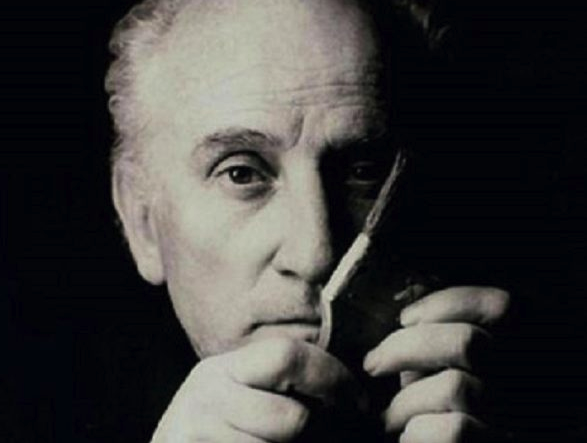 The Goulandris Foundation wanted to devote a summer exhibition to the great creator for many years and unfortunately, his death was the occasion for the tribute at the Goulandris Museum, in June 2018. As the curator of the exhibition, Maria Koutsomalli, stated, “It was necessary for us to honor his work, as he was and will remain one of the most important figures of modern art. His original work coexists with everything within the multiple faces that he researches and highlights the world that he captures and surrounds.

He was perhaps the most famous painter in Greece as he was alive, but only for a very small part of his work. Although he always refused to comment on his country’s political life, he was one of the most powerful critics of the dictatorship of the colonels. An unparalleled designer, he never rested only on this talent, and he did not hesitate to introduce the photography and stencil technique to his work method. Demonstrating the same freedom in the portraits of the celebrities and in the compositions that resulted exclusively from his imagination, he refused to confine himself to a single kind of representation and used without distinction – and with the same comfort – realism and fiction. ” 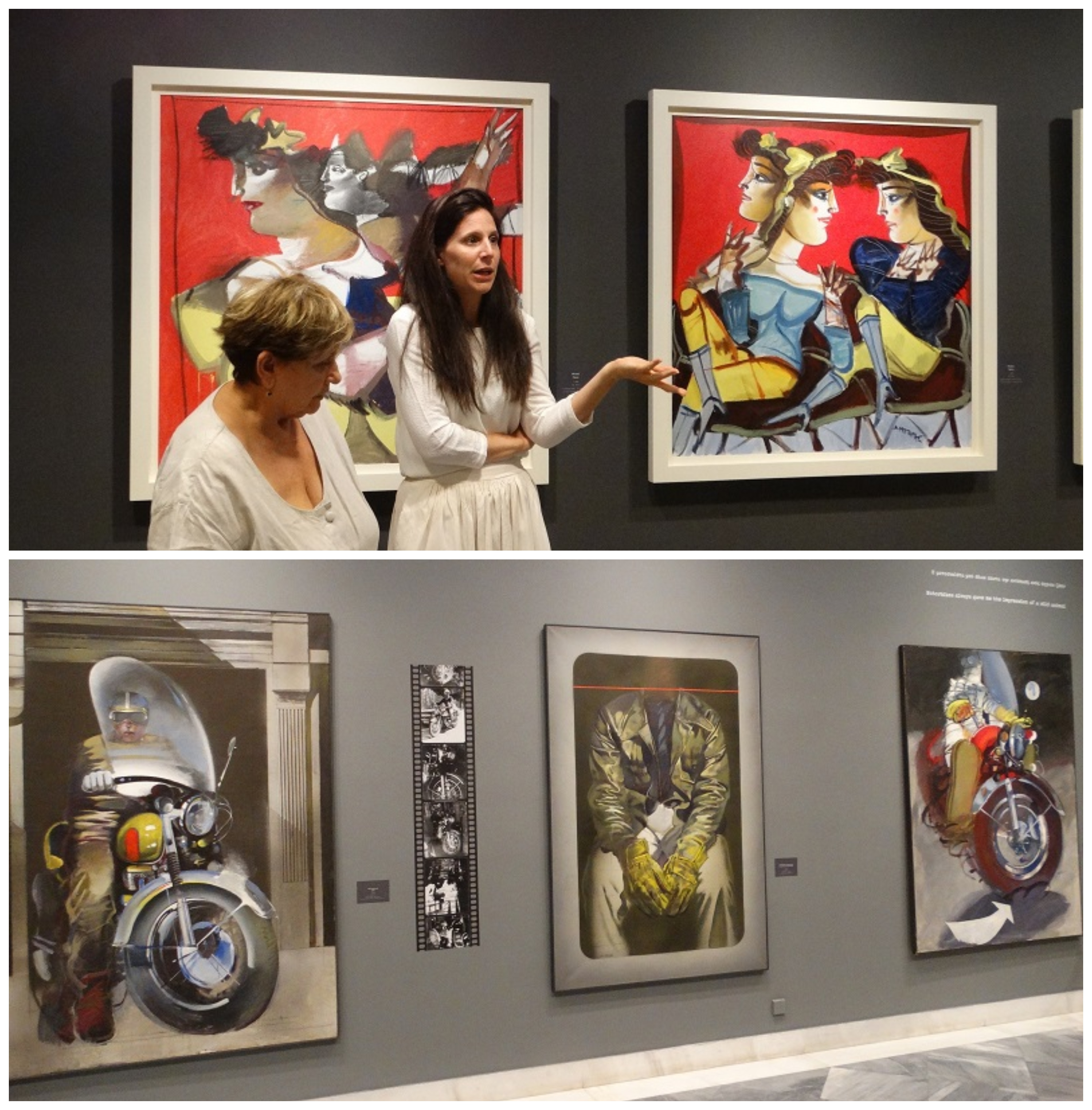 As Ms. Koutsomalli quickly realized, they could not seek the completeness of a retrospective exhibition, because the museum does not have the necessary space to present the work of D. Mytaras in its entirety. “Sixty years of creation want space, and although we have three whole floors, we have understood that we should better focus on the important sections that most represent the course and personality of the person.”

The main characteristic of Dimitris Mytaras’s painting, according to the Museum of Contemporary Art, is the coexistence of contradictory data, which skillfully intertwine, creating the paradox that runs through its fertile and creative artistic course. His poetry is coextensive with violence, lyricism with cruelty, pleasure with harshness. It is a complex but original work, with many aspects, which has been developing for almost sixty years. Mr. Mytaras, with full dedication, performed the function of the artist, investigating and revealing with subjectivity and singularity the way to capture the world that surrounded him. 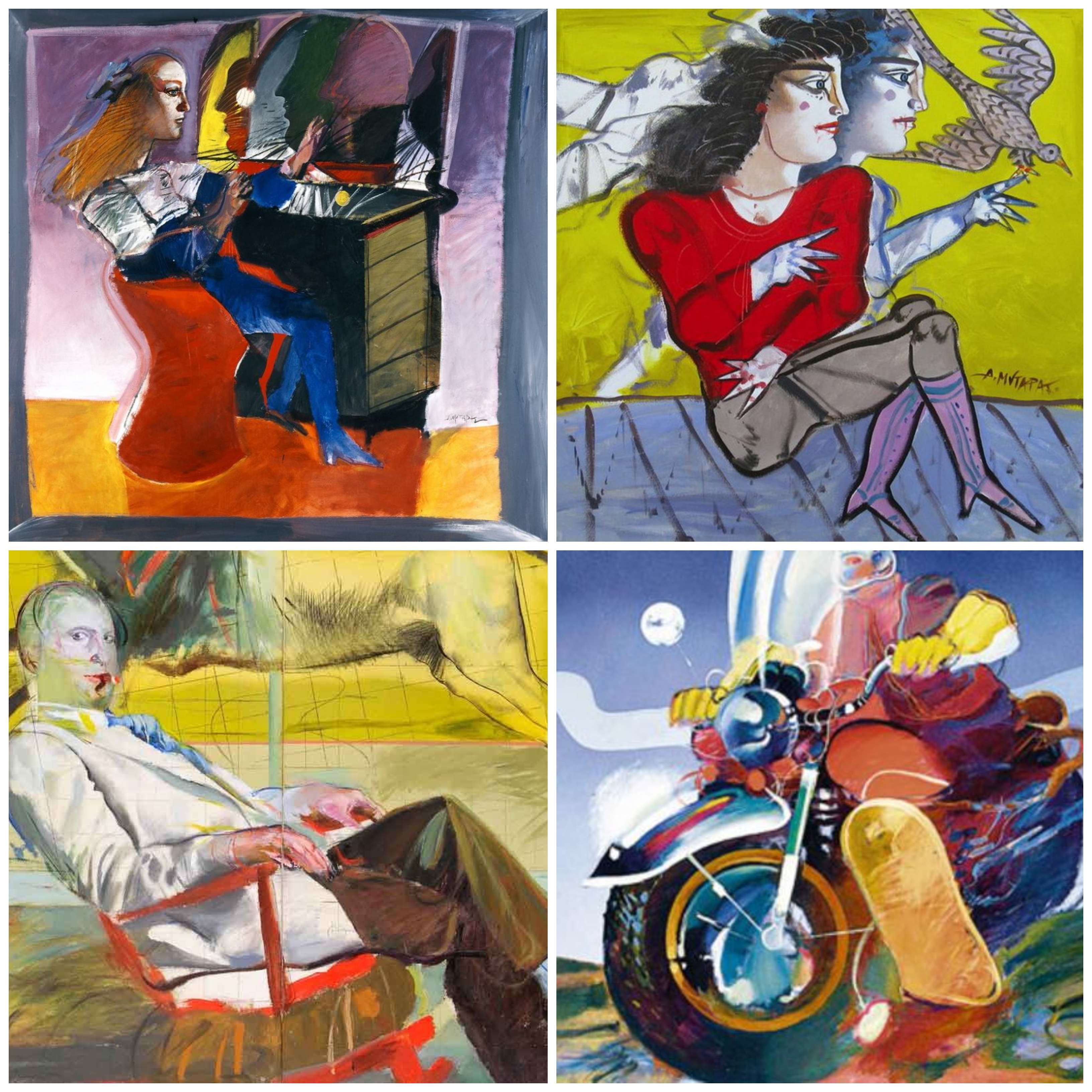 “If you take out Mytaras from the Greek art history, then you understand that it will be very poor,” said Lavraki Plaka, the director of the National Gallery, about the important painter.

Dimitris Mytaras said that “Art does not propose anything, neither does it give justice nor does it provide moral conclusions. A good painting is moral. A bad one, perhaps representing a moral image, is the most offensive to the feeling. Art is an outpouring, an uproar for the recipient. ” The charismatic painter and passionate teacher throughout his career supported the idea that “paintings belong to those who feel it and less to those who understand them”. 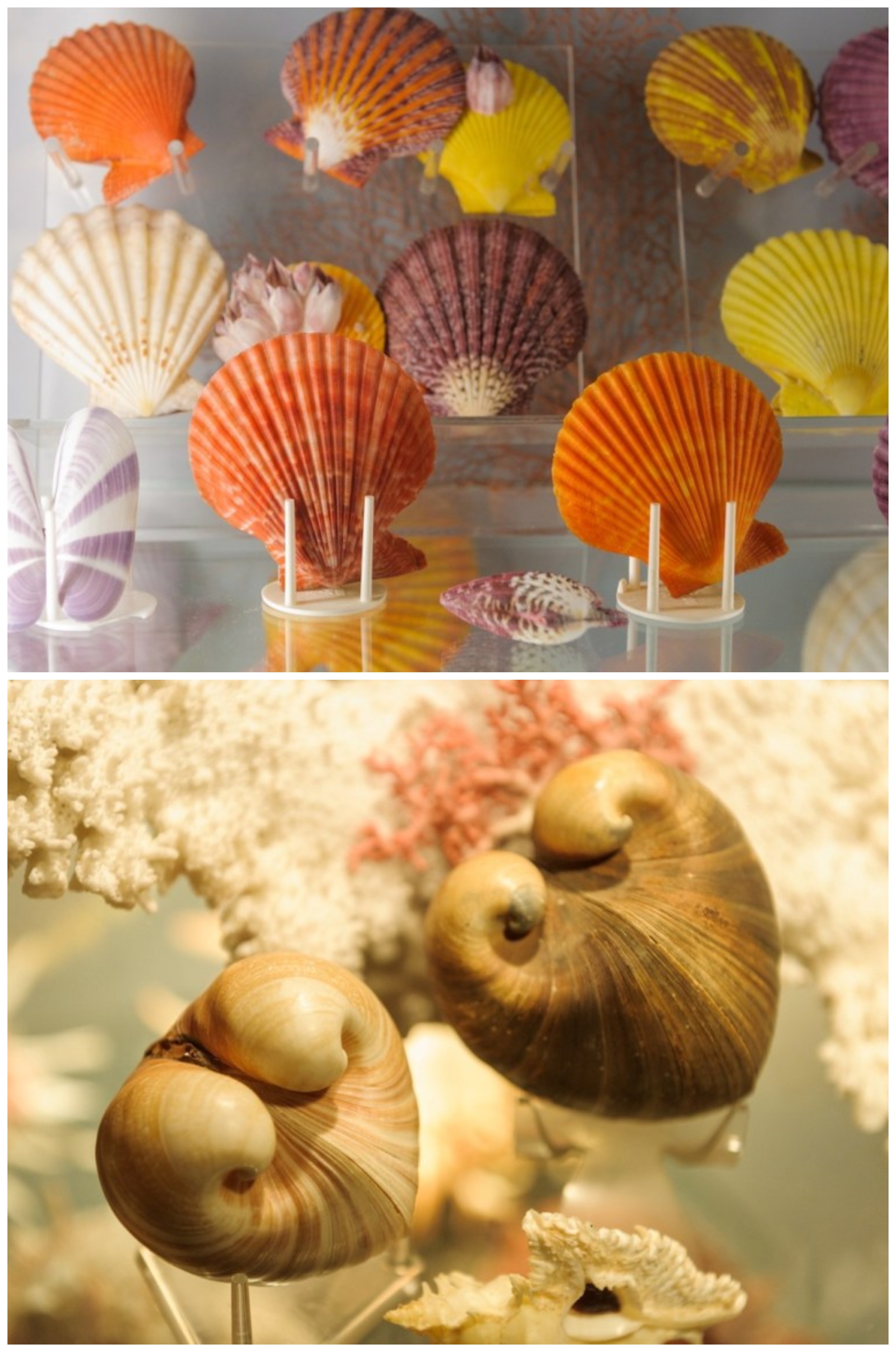 Around 1961, he began to create a collection of seashells, which reached the thousands in number. He considered the shells as artworks of nature and spent large sums to acquire separate and rare shells, and dipped in the sea, searching for them in the depths. “A little further, according to natural evolution, I would become a fish,” he had said. Each morning, he visited them for five minutes, looked at them, and left revived, “as if it were Siloam’s Baptismal Font,”, and so he could do a job. He wanted to create a museum for them as they were rare examples of seashells of great value and, according to him, anyone who saw them would be rejuvenated and would feel that nature is precious and we should not destroy it, wanting to give an ecological interest.

Still, he had a great love for animals and dogs, and he had said that he often preferred them to humans, since the latter had lost the purity of nature. 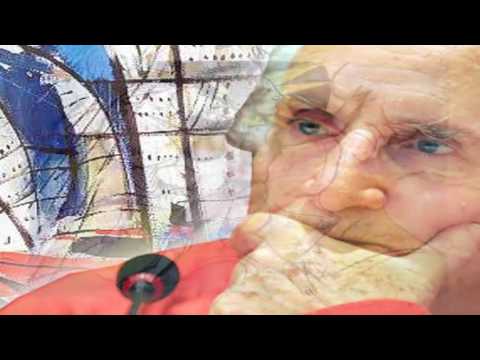