One of the greatest contemporary Greek painters

Alekos Fassianos was born in 1935 under the holy rock of the Acropolis, while his mother was a philologist and she persuaded him to engage with the Ancient Greek culture and the French language, from a very early age.

Growing up, he studied violin at the Athens Conservatoire and painting at the Athens School of Fine Arts, with Yiannis Moralis as his teacher, and in 1960 he left for Paris to attend the Ecole des Beaux Arts, studying lithography for three years with a scholarship from the French State. His works were hosted in important areas of the French capital, such as the Pompidou Center and the Iolas Gallery, and he was given the opportunity to illustrate the poetry of great artists, such as Apliner and Aragon. 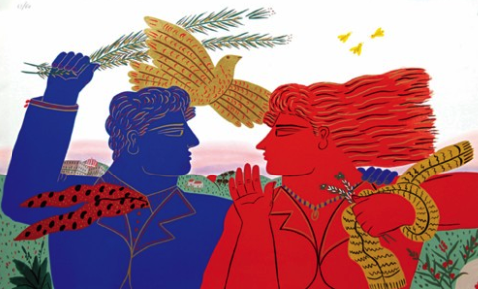 The special -trademark- artistic style of Alekos Fassianos was formed in the early 1960s. The three main themes that have remained unchanged during its course are man, nature and the environment. The study of Greek civilization and its involvement with the graphic arts and engraving influenced its painting. His first compositions are dominated by the shape of the officer with the inflatable, red cheeks, the fanciful squirrels in the outfit and the cartoon-evocative style. Gradually the figures move and acquire their own lives. They become pairs that fill the space as they touch each other, but they remain united in one mass. 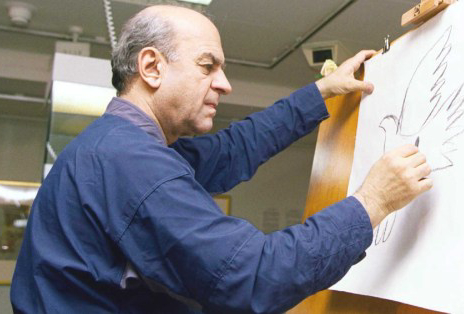 “When I do not paint, I am unhappy”, Mr. Fassianos said in an earlier interview. And even when he does not move the pencil or brush onto the paper or canvas, he is drawing inside his head. His atelier is where he materializes his inspiration. “If you have no inspiration, even the most beautiful atelier will not be enough for you so you can continue. You would do always the same things. And inspiration is a rare thing”, he says. Alekos Fassianos is a unique man, even in the way he draws his paintings. “Sometimes I paint on the floor, like the kids”, he says. 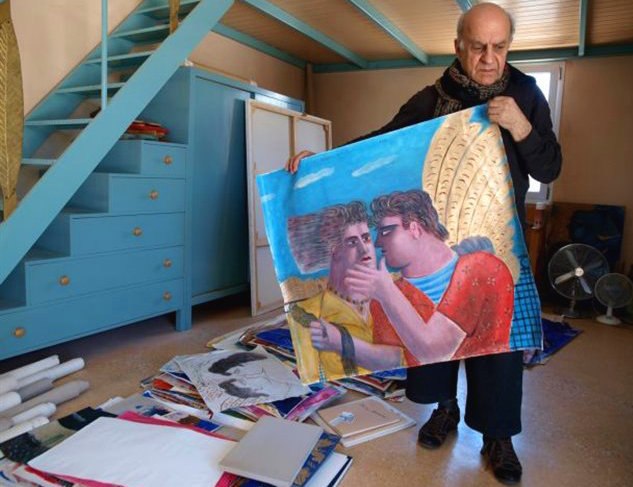 “There are some things that are inevitable, as if they have been written in the past. I remember when I was at the School of Fine Arts, I painted the floor in front of my classmates”. And they stay forever. With this phrase, Alekos Fassianos begins his note in Zygos magazine in 1973, and continues to do so in painting. With curiosity, enthusiasm, but also the attitude of a young child. “I often cried, secretly, because I could not understand what painting is. But I liked to apply a bright color, a red or a blue to a large surface that represents something”. And what he portrays in his works -from the first cyclists who smoke with shuffled hair up to the “waiting” in the arbitrary for a more comfortable tomorrow of the New-Hellenes and from the angel-lovers to the ancient gods and heroes- speak Greek, but as by a miracle, everyone understands. 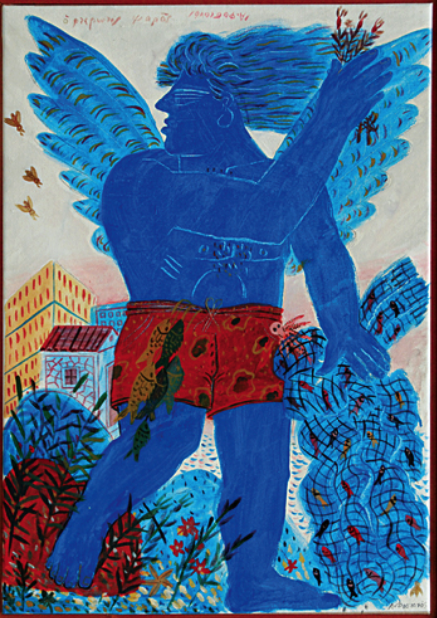 Alekos Fassianos says that he has “conquered” all of the painting materials. “With anything that falls into my hands I can create. Someone must not be a slave to the materials, but to conquer them. Because the material is a means by which you can create. It may be stone, wood or anything else. And for painting they just need colors. The materials are made by myself. I make colors with glue and dust. When you cook your house, do you not cook better than these restaurants? That’s what I do. My studio is like a kitchen. I cook and make unique recipes”, he says.

“Small, petit format” works that have been crafted over the last fifteen years, with artistic value inversely proportional to size, because small ones are the starting point of major projects. As he says, “the idea is small at the beginning of its arrest, but later, if you want, you look at it in a large dimension”, adds Mr. Fasianos. 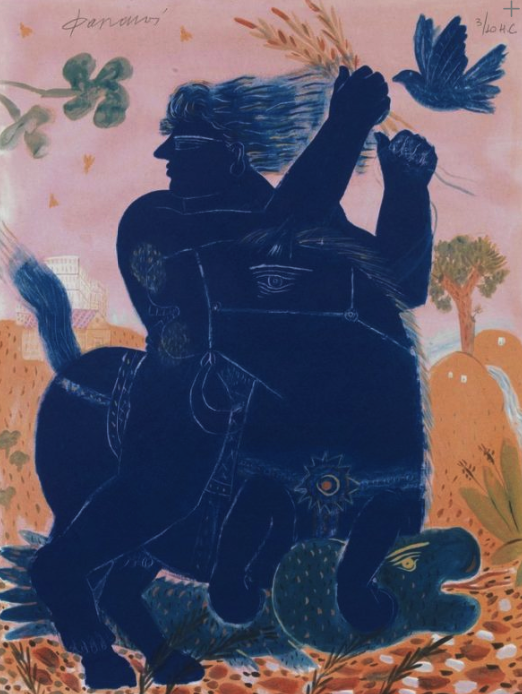 His daughter, Victoria Fasianou, has naturally grown into her father’s painting, writing, scenery, sculpture and pictorial work, and due to this fact, she curates and presents the latest exhibitions which exude sensitivity and respect to her father’s inspiration and artistic creations. Mr. Fassianos believes that these exhibithions are of great importance as they underline the dialectic of the myths of Greece in a difficult period for the country, and believes that Greek myths are alive and known worldwide because they are linked to reality and logic. The myths of other countries have more to do with demons and magic, such as the fairy tale of the Eastern countries with customs, genies and granting of wishes. 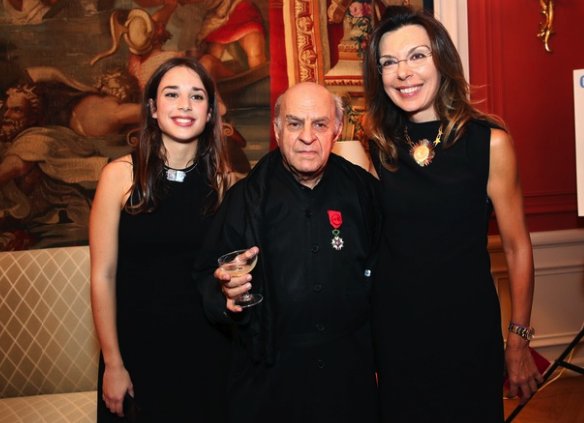 For Alekos Fassianos, at this time we have more than ever the need to free ourselves from the misery we live everyday. “With the myth you stand up, you wield feathers and fly, like Daedalus, who wielded wings to leave his prison. Myth leads you to freedom. Myth inspires you to be strong and to reach your purpose, as, say, Odysseus. I have the myth in my mind, and so I freed myself. Myth brings you out of oppression, your prison. And you become another man, free. Freedom is a great thing. And of course the freedom in art, which is nothing but to realize your own vision”, he notes.

Alekos Fassianos has experimented with many different types of visual expression and has done more than 40 exhibitions in some of the most famous art galleries in the world. He has participated in the Biennale, he maintains special ties with France. “I do not mimic what is going on outside to bring it to Greece. On the contrary, what I do I recommend it abroad”, he concludes. 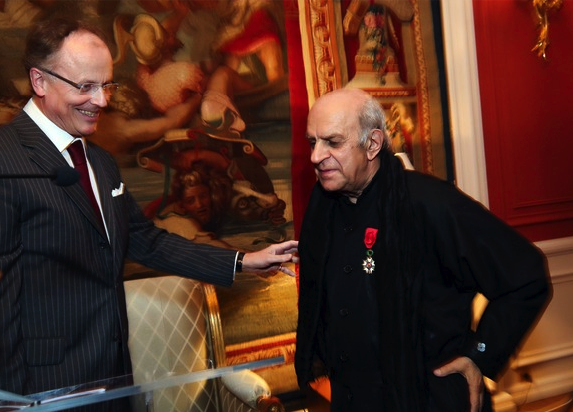 In 2013, Alekos Fassianos, one of the most worthy students of Yiannis Moralis, was honored at the French Embassy in Athens with one of the highest distinctions of the French Republic. On the occasion of the 100th anniversary of the birth of the great novelist Albert Camus, Mr. Fassianos undertook to create a poster that embellished the reception hall at the Embassy. On his brief address, Jean Loup Kuhn-Delforge expressed his gratitude for the country and the city -he lived for 35 years in the Paris- which gave him the opportunity to show off his talent. Alekos Fasianos has died at an age of 87 in January 16th of 2022.