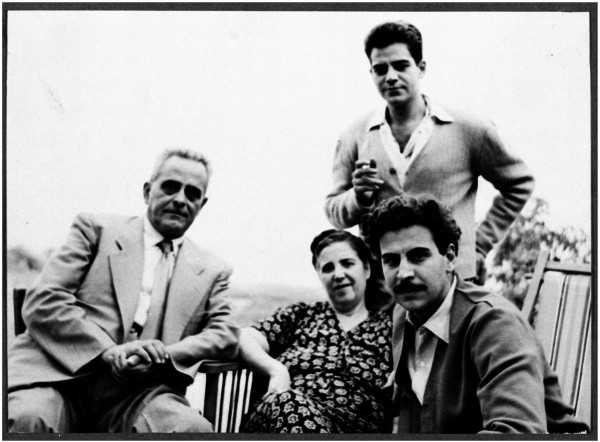 Prior to World War II, he had discovered his love for music and wrote his first compositions, and in Tripoli, only at 17 years old, he gave his first concert by presenting his work “Kassiani”. He took part in the resistance against conquerors, while at the same time he published his first poems, with the nickname “Dinos Mais”. In the great rally of March 25, 1943, he was arrested for the first time by the Italians and was tortured – while in prison, he met Marx’s work.

He managed to escape to Athens, where he organized ELAS and performed enlightener duties in the Fifth Sector of EPON. He also fought as a replica of the Silk squadron of the 1st Battalion of New Smyrna during Dekemvriana. At the same time, he continued his studies at the Athens Conservatory, with Prof. Philoktitos Oikonomidis. 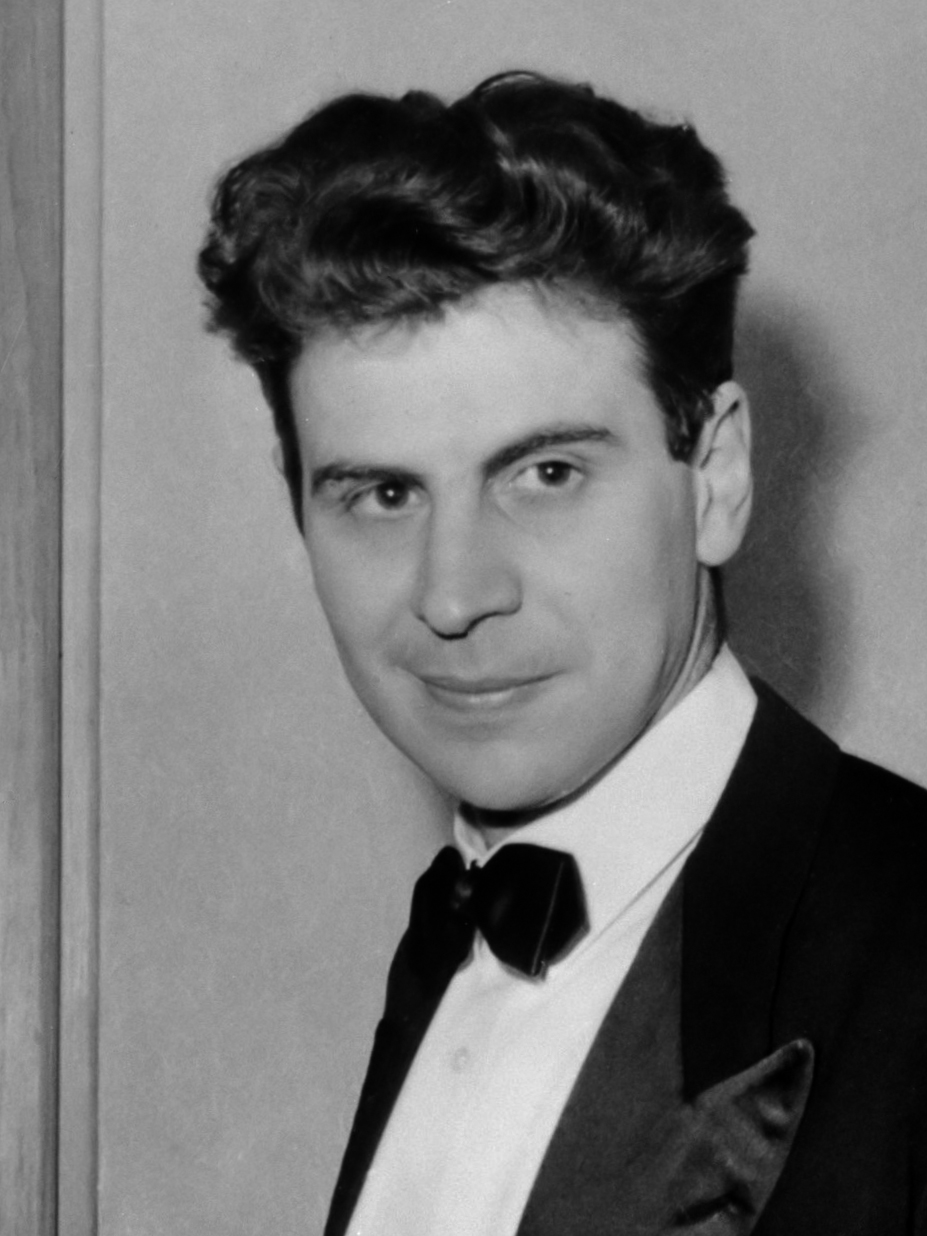 After December, he was persecuted by the police and for a while, he lived illegally in Athens. He was arrested again in mass arrests on July 9, 1947, and was then sent to exile with relative freedom of movement in Ikaria, where he became the party leader of the village of exile and from where he tried unsuccessfully to escape with the other exiles, under Vassilis Zannos. With the generalized amnesty given by Themistocles Sofoulis’ government, he went into an unlawful endeavor to participate in armed groups of the Democratic Army of Athens and was found in the team of Paul Papamerkouriou.

His next arrest came at his father’s home, where he had found shelter while being sick of pleurisy, but then he was sent again to exile in Ikaria, this time under conditions of disciplined living for a few months, where he wrote the work “Elegy and Lament to Vasilis Zannos “, in memory of Vassilis Zannos, who was executed in 1948. Then he was sent to the camp of Makronissos, where he was tortured until paralyzed and after the intervention of his father and his uncle, senior civil servants, he was dismissed as a disabled person.

Later, he composed works of “classical” music and on March 5, 1950, he presented his first work, “Festival of Asi-Gonia” (1946) at the Orpheus Theater in Athens, by the Athens State Orchestra, with conductor Philoktitos Oikonomidis.

At the end of 1949, he was sent to Chania, where he stayed to recover, and the following year, returned to Athens, where he graduated from the Conservatory with a Diploma in Harmony. He then served the rest of his tenure in Alexandroupolis, Athens and Chania and, in 1951, he was finally dismissed by the army.

In 1953, he married doctor Mirto Altinoglu and then emigrated with a state scholarship to Paris, where he enrolled in the Conservatoire and studied for a short time with Olivier Messiaen, musical analysis and conducting with Eugène Bigot. He composed music for the ballet of Ludmila Tcherina, Covent Garden, Stuttgart Ballet, and the cinema. In 1957, he received the first prize of the Moscow Festival by Shostakovich for his work, Suite No 1, for piano and orchestra. 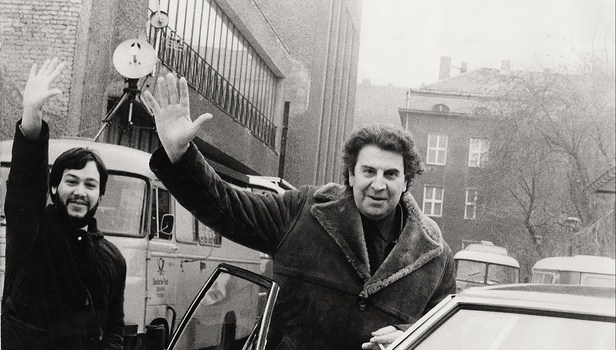 One night in 1958, while waiting for his wife in the car, he read the “Epitaph” by Yiannis Ritsos and composed the first eight poems on the spot. While continuing to compose, in 1959, he was awarded the Copley Award for Best European Composer of the year.

In 1960, he returned to Greece and, in September of the same year, the Epitaph was recorded for the first time, opening a new road to Greek music, not only because it marked a substantial change in musical form but because he married modern folk music with modern Greek poetry. The first version of the Epitaph by Yannis Ritsos (written in 1958) was recorded by Nana Mouskouri with an orchestra, which was conducted by Manos Hadjidakis.

It was, therefore, the time that Theodorakis went to the field of singing and united the popular rhythms, the folk instruments, the folk singers and the poetry of the top representatives of the 1930s generation (Giorgos Seferis, Odysseas Elytis, Yiannis Ritsos, etc.). He also wrote music for Michael Cacoyannis, “Zorbas” (1964), and for two theatrical performances that marked the 1960s, the “Magic City” and “The Neighborhood of the Angels”. In 1963, after the assassination of Gregory Lambraki, the “Lambrakis Youth” was founded, in which he was elected President. At the same time, he was elected a member of the EDA, the political party. 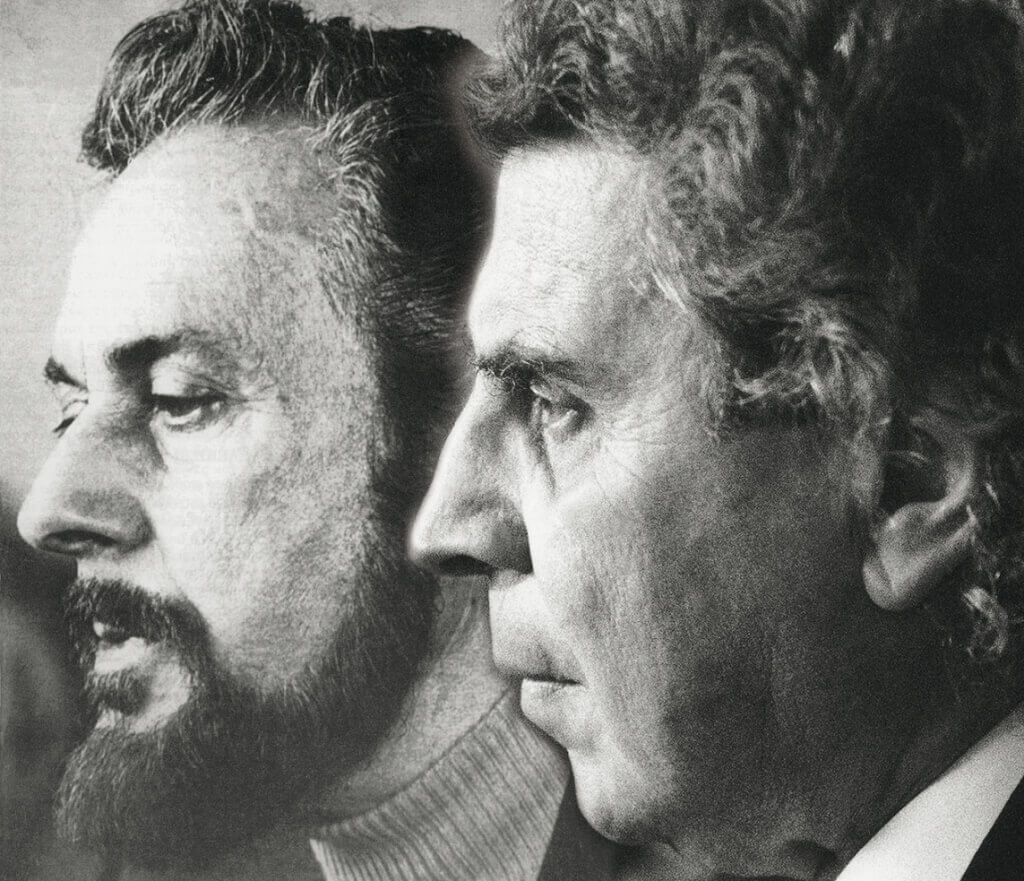 On April 21, 1967, the imposition of dictatorship came and he went back to illegality by addressing the first call for resistance against the dictatorship, on 23 April. In May, he founded, together with others, the first anti-dictatorial organization against the Dictatorship and was elected president. In August, he was imprisoned in Bouboulina Street, fact that was followed by the isolation, the Averof Prison, the hunger strike, the hospital, the release and home confinement, the displacement with his family in Zarouna, Arcadia, and the camp of Oropos . Nevertheless, many of his new works managed in various ways to pass the borders of Greece and were sung by Maria Farantouri and Melina Merkouri.

In Oropos, the state of his health deteriorated, leading to a storm of protests emerged from abroad, and after the international outcry and celebrity attempts, such as Dimitry Shostakovich, Leonard Bernstein, Harry Belafonte, Arthur Miller and Hans Isler, he was granted, in 1970, amnesty. Then he left abroad, from where he called for a new fall of the dictatorship and the restoration of the Republic to Greece.

In 1972, he visited Israel, where he gave concerts and met Yasser Arafat, to whom he gave the message of the Israeli government and tried to persuade to start a dialogue with the other side – moves and dozens of concerts that made him well- known as a symbol of the anti-dictatorial struggle across the world. 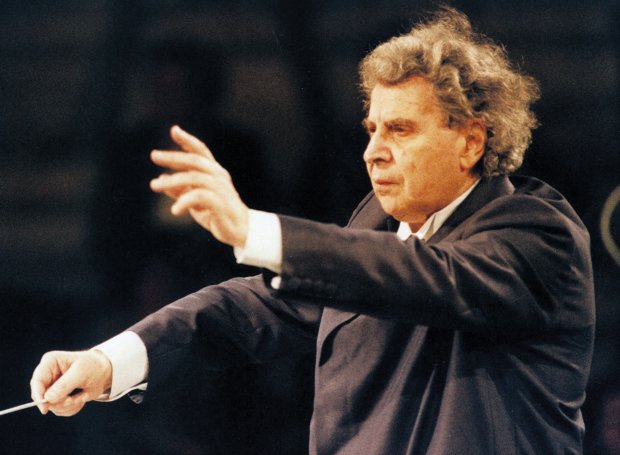 In 1974, with the fall of the Dictatorship, he returned to Greece and gave numerous concerts both in the country and abroad, accompanied by Maria Farantouri, and, two years later, he founded the “Peace Culture” movement and gave lectures and concerts all over Greece.

In 1983, he was awarded the Lenin Prize for Peace, while at the same time, he participated in politics either as a simple citizen, either as a member of the parliament (in the years 1981-86 and 1989-92) or as the Minister of State (1990-92), positions from which he eventually resigned. 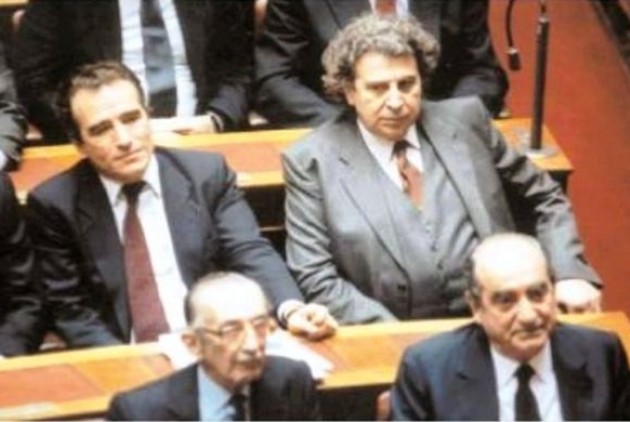 In 1986, the creation of committees for Greek-Turkish friendship in Greece, with its president in Turkey, took place with the participation of well-known intellectuals such as Aziz Nesin, Yasar Kemal and Zylvy Lebanese. Theodorakis gave numerous concerts in Turkey, attended mainly by young people with slogans for the friendship between the two peoples. Later, he played the role of the informal peace ambassador once again, sending messages to the Turkish government by Greek Prime Ministers, Andreas Papandreou and Konstantinos Mitsotakis.

Also, in the same year, after the Chernobyl disaster, he conducted a major tour of concerts across Europe against atomic energy. In 1988, two peace conferences in Tübingen and Cologne were held in West Germany on his initiative, where politicians such as Oscar Laponden and Johannes Rau, philosophers such as Friedrich Drenthem, writers, politicians and artists participated. There he had the opportunity to develop his theory of free time and his importance in the formation of free people. 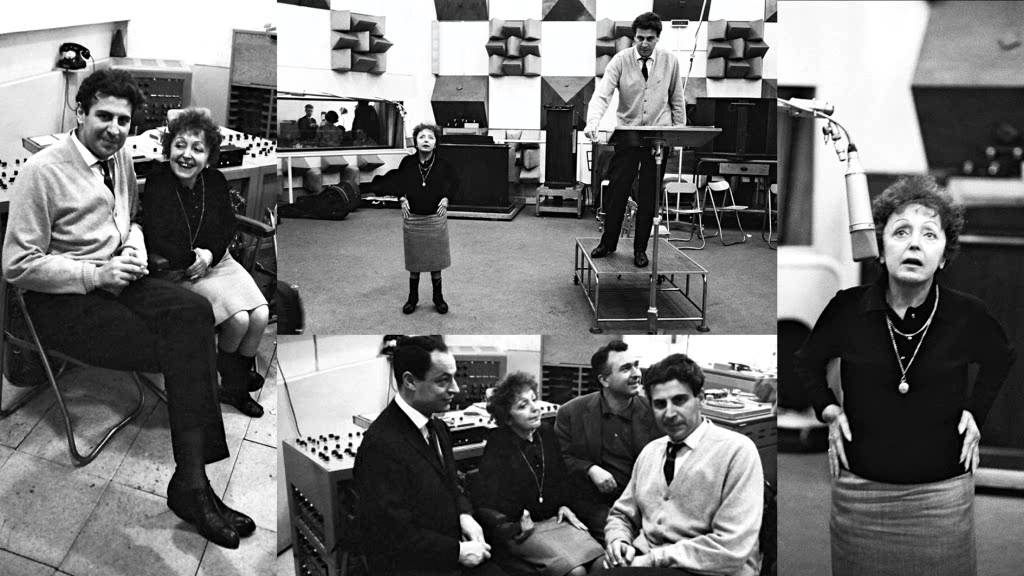 In 1989, the organization was targeted by the November 17th, and by government decision, Mikis Theodorakis was among the 200 Greeks with day-to-day security to protect him from a possible attack. In 1990, he gave 36 concerts across Europe with Amnesty International’s aid. He continued giving concerts on solar energy (under the help of Eurosolar), against illiteracy, against drugs.

At the same time, he also fought for human rights in other countries, and especially in neighboring countries, Albania (who he also visited as Minister for the Rights of the Greek Minority) and Turkey. As President of an International Commission in Paris, he made efforts to free the Turkish opposition leaders, Kutlu and Sarkin, something that was finally achieved. He proposed the organization of a Pan-European Peace Conference in Delphi and submitted to the government a plan for an “Olympiad of the Spirit”. He also set up a committee of support and assistance to the Kurdish people.

In 1993, he was appointed General Director of ERT Music Ensembles and, in 1994, he received an honorary doctorate from the University of Quebec.

In 1994, the signing of the Israeli and Palestinian agreement between Persians and Arafat was celebrated in Oslo in 1994, with Mauthausen’s presentation by Maria Farantouri – which in the meantime had become a national song of Israel – and the Hymn to Palestine that wrote Theodorakis, as recognition of his own contribution to the peace affair in the region. 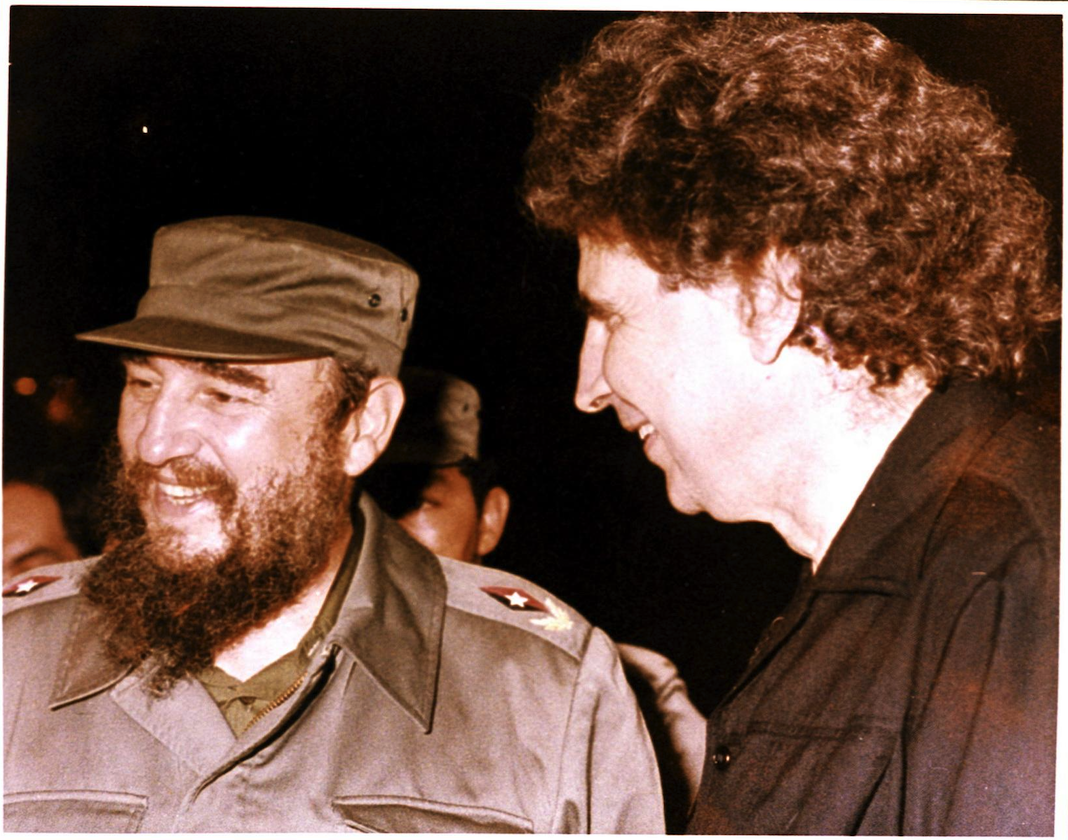 In the following years his operas, Electra (1995) and Antigoni (1999), were presented, while at the same time he developed great activity abroad and took a stand at all the important events of the time (Greek-Turkish friendship, earthquakes, bombings in Yugoslavia, in Afghanistan, war in Iraq, etc.). In 2002, his opera, Lysistrata, a true hymn to peace, was presented to the public.

In his sixty-year career, Mikis Theodorakis has written more than 1,000 songs, many symphonic works, cantatas and oratorios, music for dozens of plays and tragedies, opera and music for cinema. Since his marriage, he has had two children, George and Margarita. On the 2nd of September the great composer has died peacefully at his home in Athens. 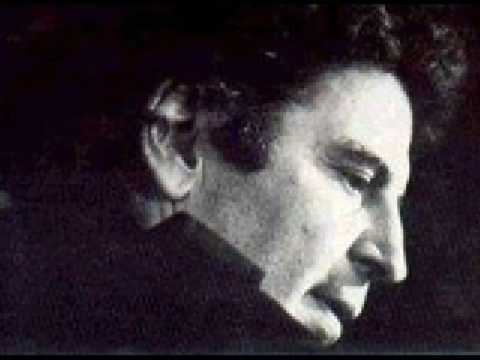