A pioneer of the New Athenian School in poetry and prose

Georgios Drossinis was a poet, a novelist, a journalist and was one among the pioneers of “New Athenian School” in poetry and in prose. His first collection of poems “Istoi Arachnis” in 1880, signalled the appearance of the New Athenian School, while his first short story “Chrysoula” won the first price at the first contest of novels of the magazine “Estia” three years later.

Georgios Drossinis, was born on 9 December 1859 in Plaka, the old historical neighbourhood of Athens and his parents were from Missolonghi, in western Greece.

He studied law at the University of Athens and transferred to the Faculty of Philosophy after the recommendation of Nikolaos Politis. In 1885, he continued his studies in History of Art abroad at the Universities of Leipzig, Dresden and Berlin in Germany but he did not get a degree.

When he came back to Greece, he became the director of the magazine “Estia” from 1889 until 1897. In 1894 Drossinis turned the magazine into a daily newspaper.

Except of his great work in literature, he also contributed significantly in many fields. He was the Secretary of the Association for the Dissemination of Useful Books, which was founded by Demetrios Vikelas in 1899. He was the director of the “Journal of Great Greece”, Drossinis showed great interest in educational issues and wrote school books, he took up important positions in the Ministry of Education from 1914 until 1923. He worked towards the foundation of the Academy of Athens (1926) and became one of its first members and he was honoured by the Academy of Athens with the “Award for Excellence in Arts and Letters”.

In 1879, his first verses published in the magazine “Rambagas” with the nickname “Spider” (Αράχνη). One year later, his first collection of poems was released under the name “Spider Webs” (Ιστοί Αράχνης).

In 1918, Drossinis and his brother bought a house from their uncle Diomedes Kyriakos in Kifissia, Athens and from 1939 they lived there permanently.

Drossinis lived there until his death on 3 January 1951.

– His family fought during the Greek War of Independence.

– Drossinis, such as Kostis Palamas and Nikos Kampas, contributed to the development and establishment of modern Greek language (“Demotic”) and to the turn towards Greek folk tradition.

– In 1947, he was nominated for the Nobel prize for Literature on his whole work, but the prize was awarded to Andre Gide.

– Drossinis’ house is Municipal Library of Kifissia from 1991 and museum from 1997. 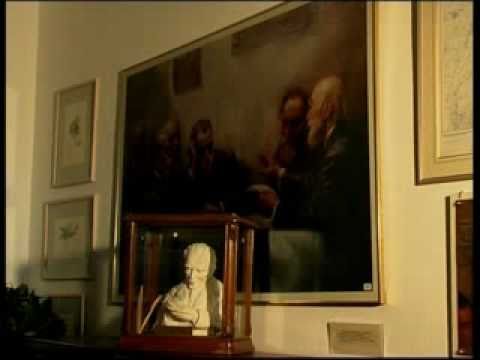