One of the major Greek poets of our times

«I am from Constantinople by descent, but I was born in Alexandria—at a house on Seriph Street; I left very young, and spent much of my childhood in England. Subsequently I visited this country as an adult, but for a short period of time. I have also lived in France. During my adolescence I lived over two years in Constantinople. It has been many years since I last visited Greece. My last employment was as a clerk at a government office under the Ministry of Public Works of Egypt. I know English, French, and a little Italian.»

With these few words, Constantine Cavafy identified his roots and part of his knowledge. Simple, brief, one of the major Greek poets of our times.

The ninth child of Peter-John Ioannou Cavafy, a major cotton merchant and Charicleia Photiades with roots in Constantinople, he was born on April 29th, 1863, in Alexandria, where his parents had relocated from Constantinople.

Peter-John’s death in 1870 caused the end of their family business and forced the surviving members to move to London.

In 1922, at the age of 59, he was appointed as public servant at the Ministry of Public Works. However, Cavafy had already started publishing his poems since 1886, influenced by the Athenian romantic poets.

Irony in his language, sensuality at the beginning of his writing journey. His poetry gave birth to a unique trend and was internationally acknowledged, as his works were translated in tens of languages.

Cavafy himself categorised his poems. The 154 poems he acknowledged, 37 Repudiated, most of them belonging to his youth, in romantic puristic language, the Unpublished, 75 poems found completed yet unpublished during his lifetime and 30 Unfinished poems, discovered in draft form.

According to references, Cavafy had been refining every single line of his poetry for years and often made last minute editing at the print shop.

Cavafy’s poems are known for the use of idiosyncratic language, a mix of puristic and demotic language with frequent Constantinople idioms. At the same time, he rarely used adjectives and though he wrote poetry, he actually wrote prose. His texts are short, he avoided expressing his fellings, while reciting them is rather particular, as he always payed special attention to punctuation, which either changed the verse’s meaning or led to voice volume variations, as he also used several sentences in brackets.

In 1904, he published an edition of his poems collection, including the following poems: “Voices”, “Longings”, “Candles”, “An Old Man”, “Prayer”, “The Souls of Old Men”, “The First Step”, “Interruption”, “Thermopylae”, “The Windows”, “Waiting for the Barbarians”, “Unfaithfulness”, “The Horses of Achilles”. The collection was published in just 200 of privately printed booklets and broadsheets.

In 1910, he republished an enlarged edition of his poems collection, adding seven new poems: “Trojans”, “Monotony”, “The Funeral of Sarpedon”, “The Retinue of Dionysos”, “The Footsteps” and “That’s the Man”.

In 1932, Cavafy traveled to Athens, having been diagnosed with cancer of the larynx and had the opportunity to receive public love and reward. Following his return to Alexandria, his health deteriorated.

He was hospitalized at the Greek Community Hospital, where he died on April 29th, 1933, at the age of 70.

Two years after his death, in 1935, the first complete collection of his 154 poems was published, edited by Rika Segopoulou, and was sold out. Tens of later reprints followed. 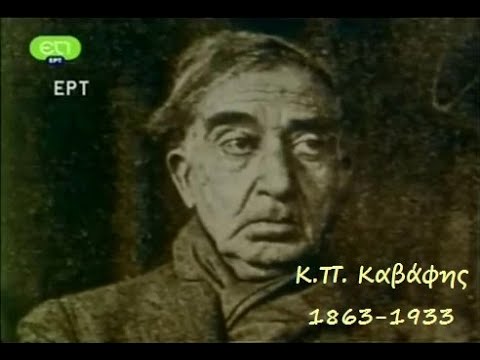 “Henceforth work as best you can — Mind.”

“Do Truth and Falsehood really exist? Or, is there only New and Old—and the False is simply the old age of Truth?”

“Gods don’t die. It is the faith that dies, the faith of the ungrateful crowd of mortals.”

«What is to become of us without barbarians? Those people were a solution of a sort.»

(“Waiting for the Barbarians”)

“As one prepared long since, as fits the brave,

farewell to the Alexandria you love.”

“You long for something else, ache for other things:

praise from the Demos and the Sophists,

that hard-won, that priceless acclaim.”