Ambassador of Greek surrealism in poetry

Nikos Gatsos is the ambassador of Greek surrealism in poetry, a lyricist and translator of theatrical plays.

He was born in 1911 in Asea inArcadia, where he finished primary school.

He later studied at the School of Philosophy of the University of Athens.

In 1943, he successfully published his single long poem Amorgos, establishing it as one of the most influential surrealistic poems.

Moreover, he started writing lyrics for the music of Manos Hatzidakis and worked together with major composers, like M. Theodorakis and St. Xarhakos. His lyrics are popular among Greeks and some of his most favourite songs are Immortality, Rebetiko, Achipelagos, You took the long way, Pornography, Folk Market, Litte Rallou, One Language One Homeland, If you Remember my Dream and Paper Moon.

He also became involved in translating theatrical plays for the National Theatre of Greece, the Art Theatre and the Folk Theatre.

In 1987, he was honoured with the Municipality of Athens Award and in 1991 he was elected corresponding member of the Academy of Barcelona.

Nikos Gatsos died on May 12th, 1992 and his remains were buried in his homeland. 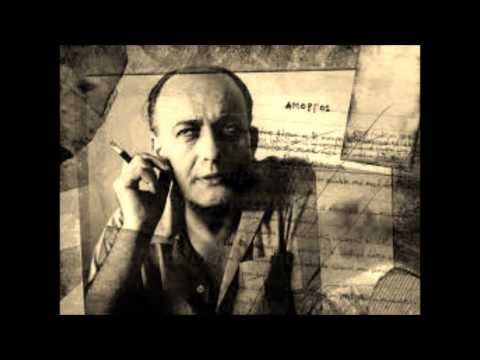 «Gatsos had an effect on me and not me on Gatsos. I was the learner»

«Nikos Gatsos never visited Amorgos. He never gave any interviews. He revealed Lorca to us in all his magnificent grandeur. Talking only about the essential, he was a very strict friend according to Manos Hatzidakis. He lived an ascetic life, distant from human relations, activities and talking, according to Alexandrinos. He was silent for quite a long time. And he sung amazingly!»

How much I loved you I alone know

I who once touched you with the eyes of the Pleiades

Upon the reaped stubble and together we ate the picked clover