He ranks among the top translated Greek writers

Antonis Samarakis was a Greek prose writer of the post war generation, who gained international acknowledgment for his work. He ranks among the top translated Greek writers, with his works being translated in over 30 languages.

Samarakis was born on August 16th, 1919, in Athens. He studied Law at the Kapodistrian University of Athens. He worked for the Labour Ministry and resigned from his post following the Dictatorship of Metaxas and later returned to his duties from 1945 until 1963. During the Nazi Occupation, he joined the national resistance. In 1944, he was arrested and held by the Nazis and was sentenced to death, but he managed to escape.

Moreover, he was a resistance activist during the years of the military coup and following the political changeover, he published several articles of social and political interest.

In 1954, he published his collection of short stories under the title Hope Wanted.

Samarakis’s work is characterized by the element of social denouncement and reflects his personal worries about the present and future of modern societies. He wrote in simple language and natural style and approached his issues from an intense anthropocentric point of view. He was widely known for his love for young people.

Samarakis was awarded the 1962 National Award for Short Stories for his work I Deny, the Dodeka Prize-Kostas Ouranis Award in 1966 for The Mistake, the French Award for Detective Literature in 1970 for The Mistake. He was also honored for his overall contribution to literature by Europalia (1982) and with the Knight’s Cross of Arts and Letters (1995).

Antonis Samarakis died on August 8th, 2003. Following his last will, his remains were donated to the Medical School of the Kapodistrian University of Athens for research purposes.

– He worked as an expert in several countries for the United Nations International Labour Organization, promoting social issues and in 1989 he was named UNICEF’s Goodwill Ambassador for the world’s children.
– The idea for the establishment of the Youth Parliament and for organizing unofficial parliamentary proceedings giving the floor to young people from all over the country belongs to him.
– Authored two years before the military coup, The Mistake by Antonis Samarakis was destined to rank as one of the major allegoric novels on totalitarianism. 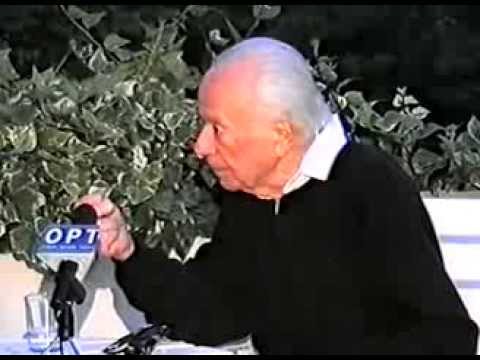 Arthur Miller: “I only wish all mongers of democracy would read «The Mistake» and understand the true meaning of their claims. We live in an era when words have no relation with reality –nothing has any meaning anymore.”

Lefteris Papadopoulos: « Arts’ goal is to make us better persons. No one proved it better than this man. The best thing that someone has to say for Samarakis was the interest he had for his fellow human being. He was a very sensitive and compassionate person, willing to spend all night long to hospitals just for a child’s minor injury. That’s how I remember him and that’s why I love him. »

Titos Patrikios: «A writer is established when his work remains. When we first read his work “The Mistake” we were certain that he describes an outdated situation. The power and the dramatic element of his work is that at present time and especially in our country, we live the risk of reinstatement of the described situation. “The Mistake” is a complaint of the emerging Nazism in Greece and the risks that any form of totalitarianism can bring. »