Nikolas Babetas invented, designed, printed in 3D, made electronic circuits, programmed and finally manufactured a product that automates antiseptic spraying. “From a young age I had a passion for doing various things and in elementary school I loved mathematics and physics because of the teachers I had,” says the teenage inventor in the newspaper “First Issue”, adding that since elementary school he had started making fans with pegs and wire toys.

“I always wanted to make an important construction inside me, but school and extracurricular obligations did not provide me with the time I wanted,” he said, adding that when “time doubled for us children” during quarantine he found the opportunity to do what he always wanted, “something nice, something different”. Nikolas Babetas started searching YouTube for videos on electronic circuits, programming and 3D printing. “I ordered different products and experimented. I managed to make some simple projects such as a car that you can operate with the TV remote control, as well as a portable fan “, he states, adding that for his constructions he used ice cream sticks, boxes, pieces of wood, among other materials. When he felt that he had reached “a good level” and “felt confident” he started looking at the competitions he could take part in and thus ended up with the “Can’t touch this” competition.

What the accessory is and how it works “I thought of making an accessory that can be adapted to different antiseptics and turn them into automatic ones. In the summer I was thinking of ways to make this project. I already had the distance sensor, the motor, the Arduino and the rest of the materials. What I was missing was a 3D printer. I managed to get him and I immediately felt that I could do the project I was dreaming of “he says, saying that he had a powerful tool in his hands. He immediately started designing 3D models and printing them. After two weeks, with several failures and many different versions, he managed to complete his project and submitted his participation in the Instructables.com competition. “It was very popular and I was happy. But beyond that, I felt like I was joining a community of people from different countries with similar interests that everyone wants to help each other. This competition was attended by people regardless of nationality and age. “Most of them were adults,” says the 14-year-old inventor. 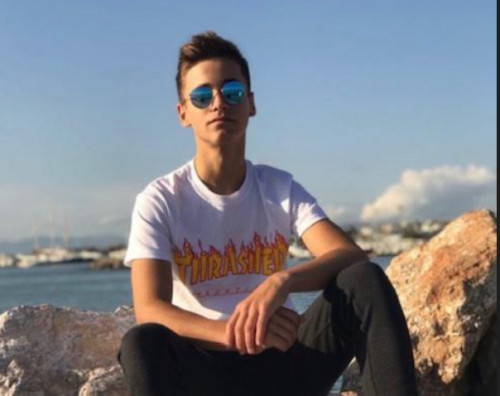 “After about two weeks, the results came out. I had won the second prize! It was a great satisfaction, a boost in my confidence for my future plans. I intend to make a new version of this project in the coming months that will be much more effective. At the same time, however, I am working on many other projects “, he says, stating that he hopes to have enough free time to do everything he has in mind.