Five Greek beaches among the best in the world

The beauty of the Greek beaches always charms and impresses the foreign visitors who glorify and vote them as some of the best in the world. This time, the travel editors of the British newspaper Guardian have created a list of the 40 best beaches in Europe.

Among paradises from the Atlantic to the Aegean Sea and from Great Britain to Turkey, five Greek beaches stood out and were included in the list, depending on the swimming, surfing, partying and eating. Check out the Greek, marvelous, summer destinations that enchant the mind and senses.

The beach of Voidokilia, a uniquely beautiful natural bay, is probably the most famous beach in Messinia and one of the most beautiful in Greece. It is made of white, fine sand, covered with lovely shells that stretch all over the beach. To its left, stands Paliokastro and on the right, on the hill, there is a vaulted tomb that belongs to- without being confirmed – Thrasimidis, son of Nestor.

The beach of Voidokilia remains “authentic” and belongs to the protected Natura 2000 zone, both for the beauty of the landscape and its significant biodiversity. In August, it is flooded by hundreds of visitors who come to admire it and enjoy its waters and aesthetic beauty.

Τhe Guardian wrote about the beach, “Normally a beach this good would be marred by development. Fortunately, the lagoon it backs on to is part of a nature reserve, and Voidokilia looks much the same as it must have done when it featured in Homer’s Odyssey. This really is one of those “perfect crescents of white sand” – the Greek name means “cow’s belly”. As well as lovely swimming in the sheltered water, there’s a cave, a castle ruin above the beach, and numerous birds, including flamingos, on the lagoon.”

One of the beautiful beaches with crystal clear waters of Kythira is Kaladi, the special beach in an omega-shape with two small bays, in the center of which stands a large rock in the sea, forming a water gallery. The pebbly and sandy beach impresses with its turquoise and crystal clear deep waters.

Kaladi is composed of three successive beaches separated by diving rocks: The main beach, which is the most beautiful and scenic and the place most people gather, the right beach with a small cave that leads to a private two-meters beach and the eastern one, which is preferred with a west wind, southern or not strong north wind.

The Guardian wrote about the beach, “Kythira seems to have avoided the overdevelopment of some Greek islands thanks to it being a little complicated to get to (internal flight or boat trip). Some would argue that Kalami is the best beach on the island, but similarly named Kaladi is just as nice and avoids the scramble down a 30-meter cliff, although there are lots of steps. The reward is three perfect little pebble coves, uncrowded even in August, and unsullied by tavernas and cantinas.” 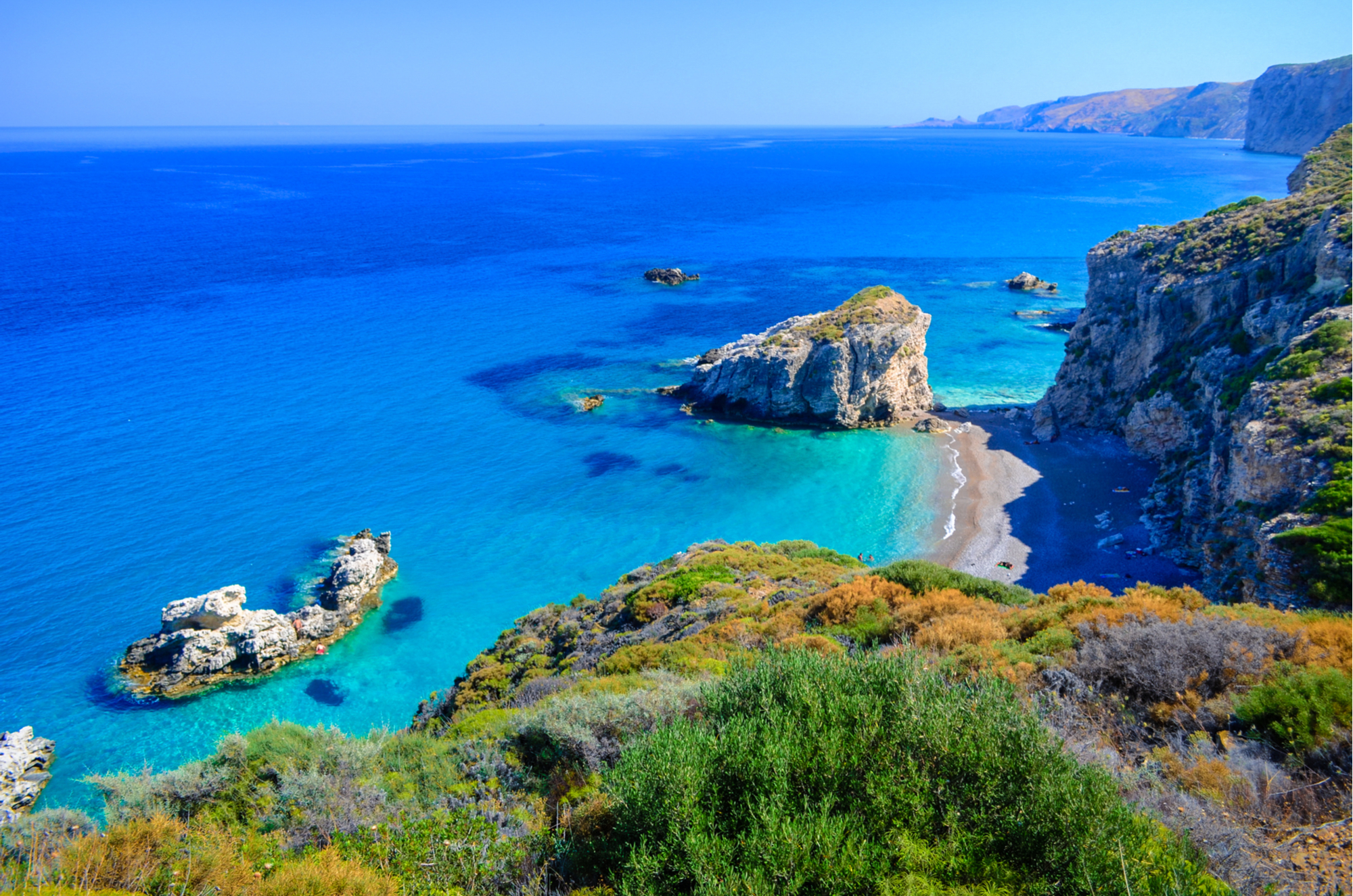 The long beach of Paleochori at Milos is impressive, amphitheatrically surrounded by cliffs with bright red color – due to their volcanic origin – decorated with colorful sand and small pebbles on the shore, while surrounded by amazingly clear waters and lit by changing colors.

The beach is one of the most organized beaches of the island, with water sports facilities offering moments of distraction and fun to the “action-lovers”. The underwater world of the beach is another treasure, with the astonishing geological phenomenon where hot water bubbles gush from the bottom and create a sense of swimming in an aquarium.

The Guardian wrote about the beach, “The spectacular cliffs that form a backdrop to this beach vary in hue from white through yellow to a burnt red, and also provide shelter from the winds that can spoil many beaches in this area. There are several bars and tavernas with sunbeds for hire vying for your trade, but the beach is large enough to soak up the attention. And as if the setting weren’t enough, hot springs under the sea provide a free thermal spa.” 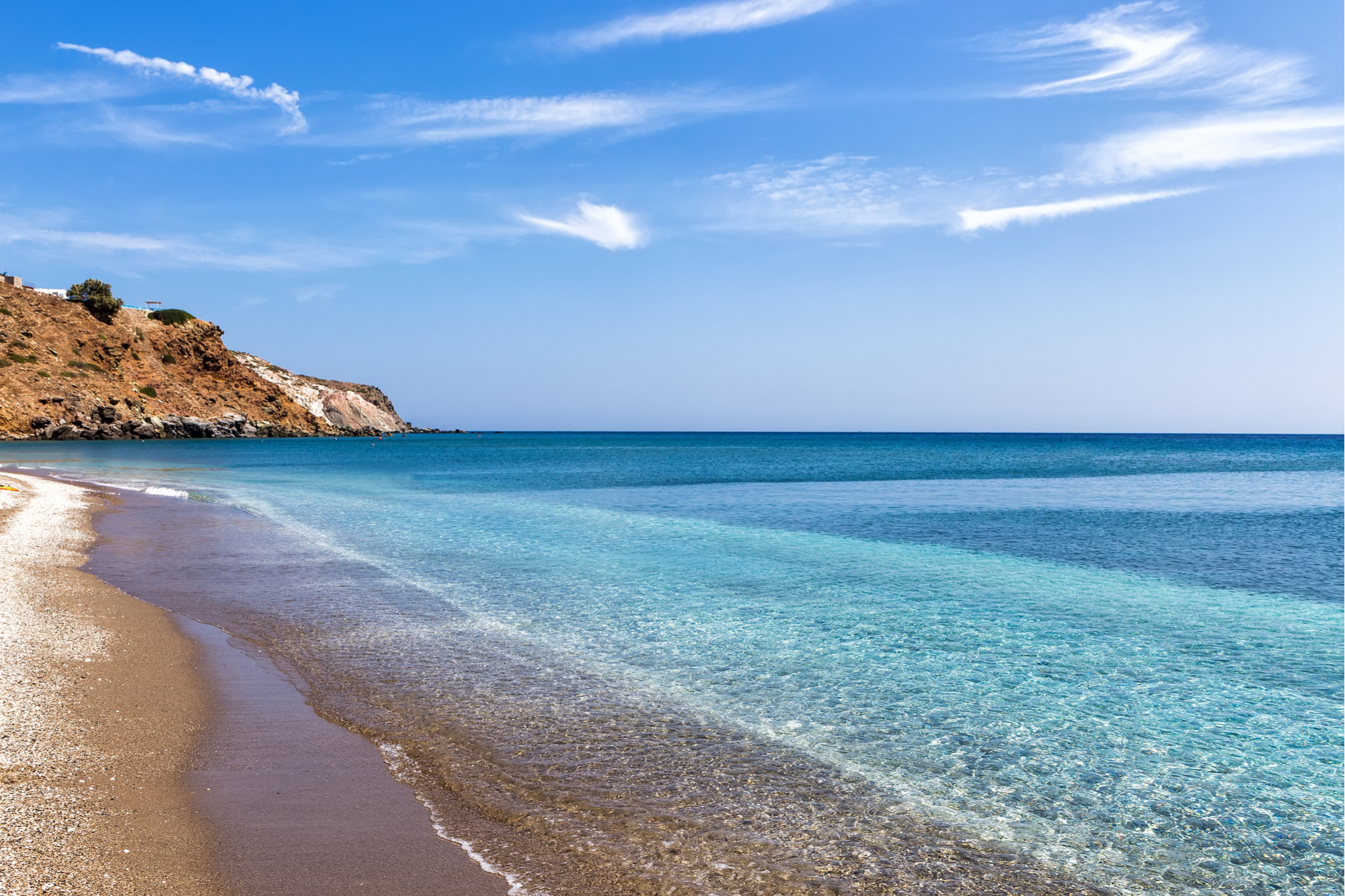 The social and eccentric beach of Super Paradise is the most famous of Mykonos since the 1950s. Located southwest of the island is covered by clear, emerald waters and golden, soft sand, and combined with its summer parties, the excellent organization and the celebrities that visit it is now one of the most visited on the island.

Guardian wrote about the beach, “People go to Greek beaches for all sorts of reasons, and for some, it is to party. Some places on Mykonos devoted to hedonism are truly grim, but not Super Paradise beach on the south coast. Golden sand, clear water and non-stop music and dancing make this the best hangout on the island – its famous club hosts all-nighters that attract hardcore partiers from all over the world.” 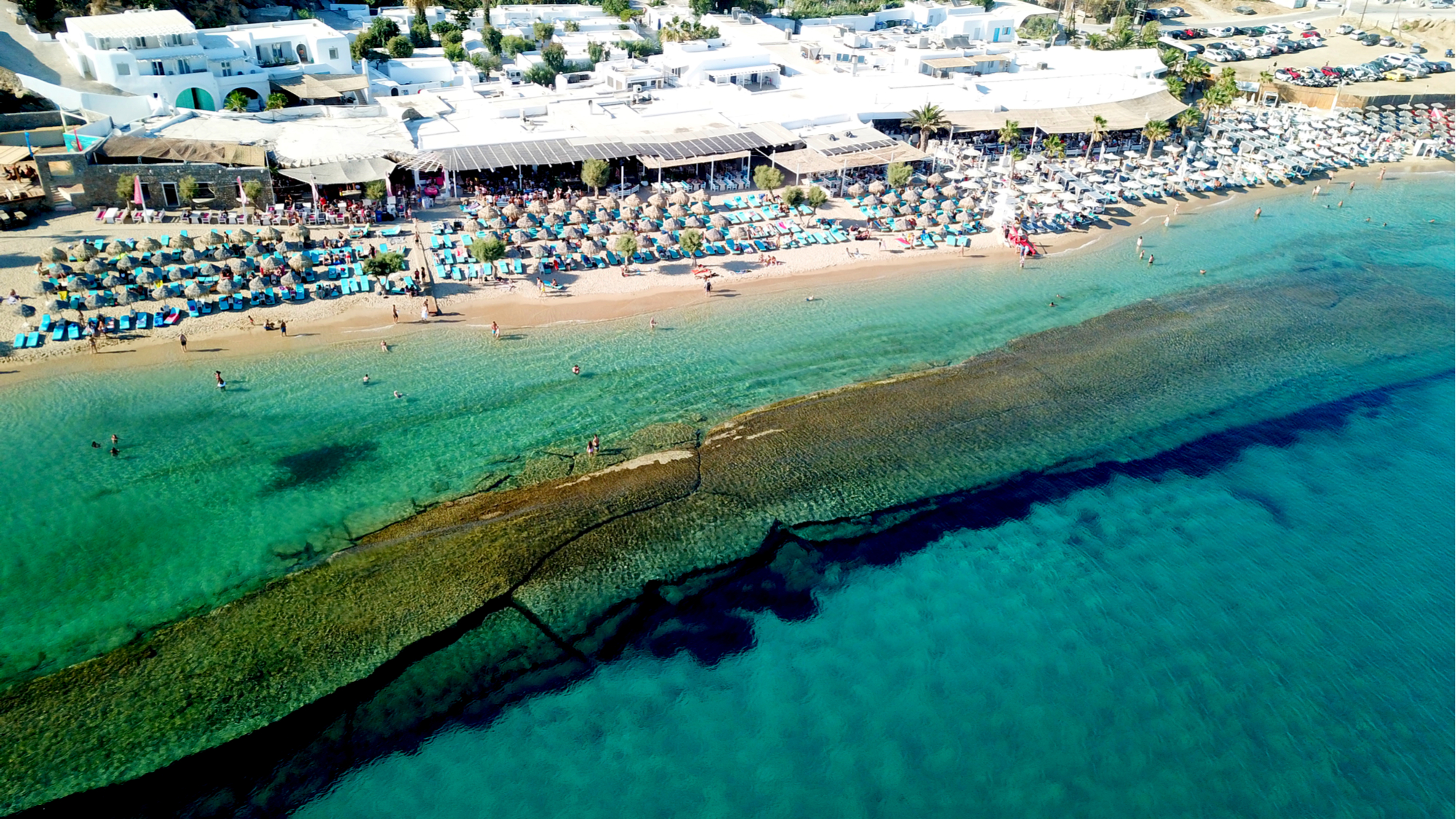 The famous Balos has white sand and vibrant aquamarine and turquoise waters, shallow and warm, making it an ideal destination for families with young children, while near the rocks, the water is deeper and colder. The beach with the beautiful pink sand, derived from crushed seashells, is formed between Peninsula Gramvousas the smallest Foreland Tigani, under the imposing massif of Geroskinos.

Besides its beautiful waters, it is also famous for its wild natural beauty and exquisite exotic landscape with rare species of flora and fauna that is part of the Natura protection program. In summer, the beach is filled daily with hundreds of visitors, who mostly arrive by boat from Kissamos.

The Guardian wrote about the beach, “Crete has many world-class beaches, and some are getting overcrowded (there are rumors that the famous Elafonisi might start to restrict numbers). The white powder and blue lagoon water of Balos beach, at the tip of the Gramvousa peninsula in the far north-west, does get busy in the middle of the day when the boat trips arrive. The trick is to come early and stay late. This is easier said than done, as getting there involves a 12km drive on a dirt road followed by a 1km hike, but it more than rewards your effort.” 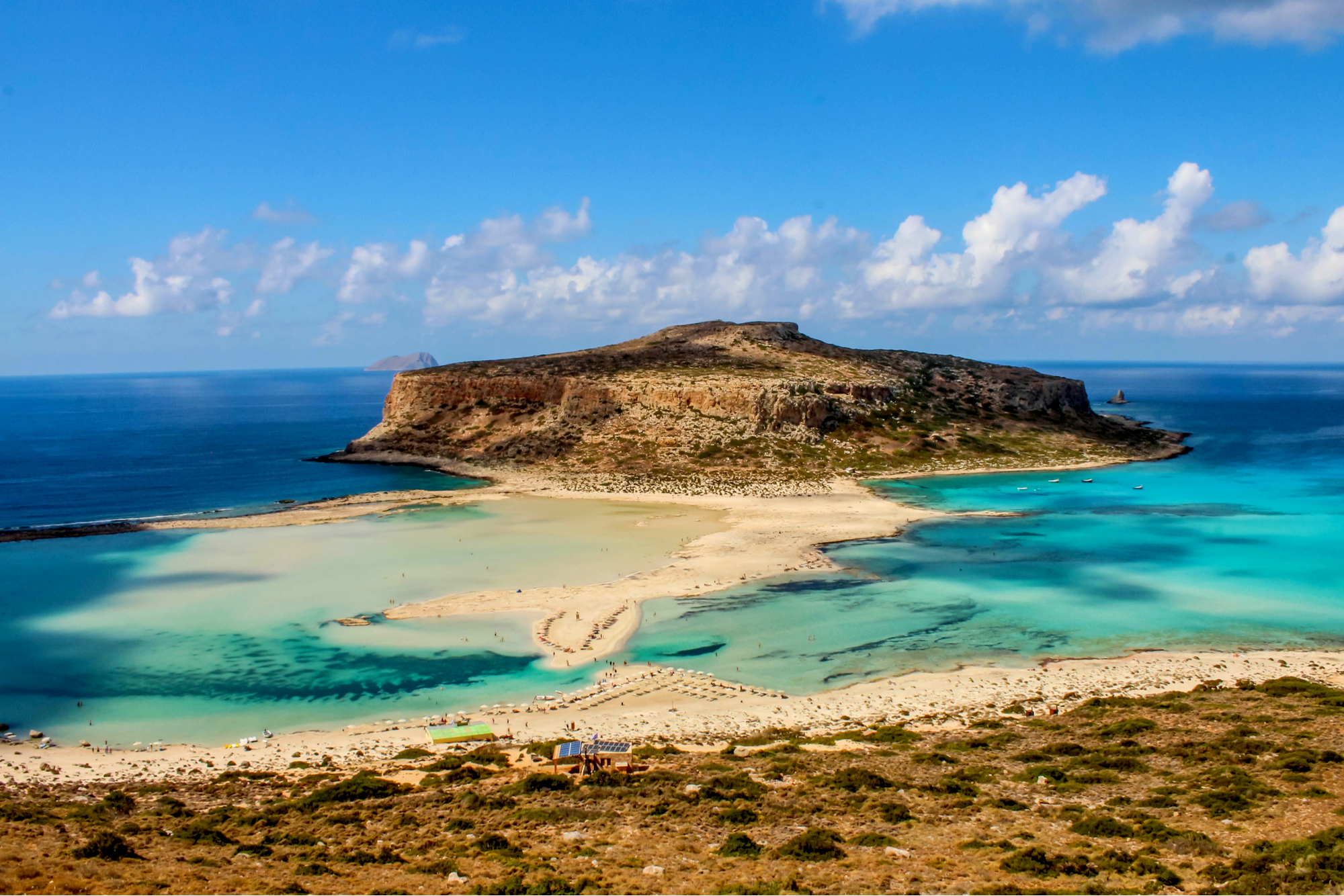