The new aesthetics in Greek design

SOPHIA Enjoy Thinking is a creative initiative of a cultural nature, which was born 4 years ago. Its main concern is the promotion of the Greek cultural heritage while giving a new aesthetics in Greek design, through unique objects. It has been loved by 25 museums and 400 shops around the globe and has been involved in exhibitions abroad, such as at Maison et Objet in Paris for four consecutive years, at Top Drawer in London and at Homi in Milan.

SOPHIA gives inspiration through a range of objects such as stationery, toys, frescoes through the diffusion technique, books and aromatic candles that highlight the work and thought of outstanding architects. The collection is designed and edited not only for architects and creative minds but also for anyone who is exploring the world today. A wide range of products balance between art and modern design, quality and creativity, as well as the ancient Greek wisdom and spirit of the 21st century. 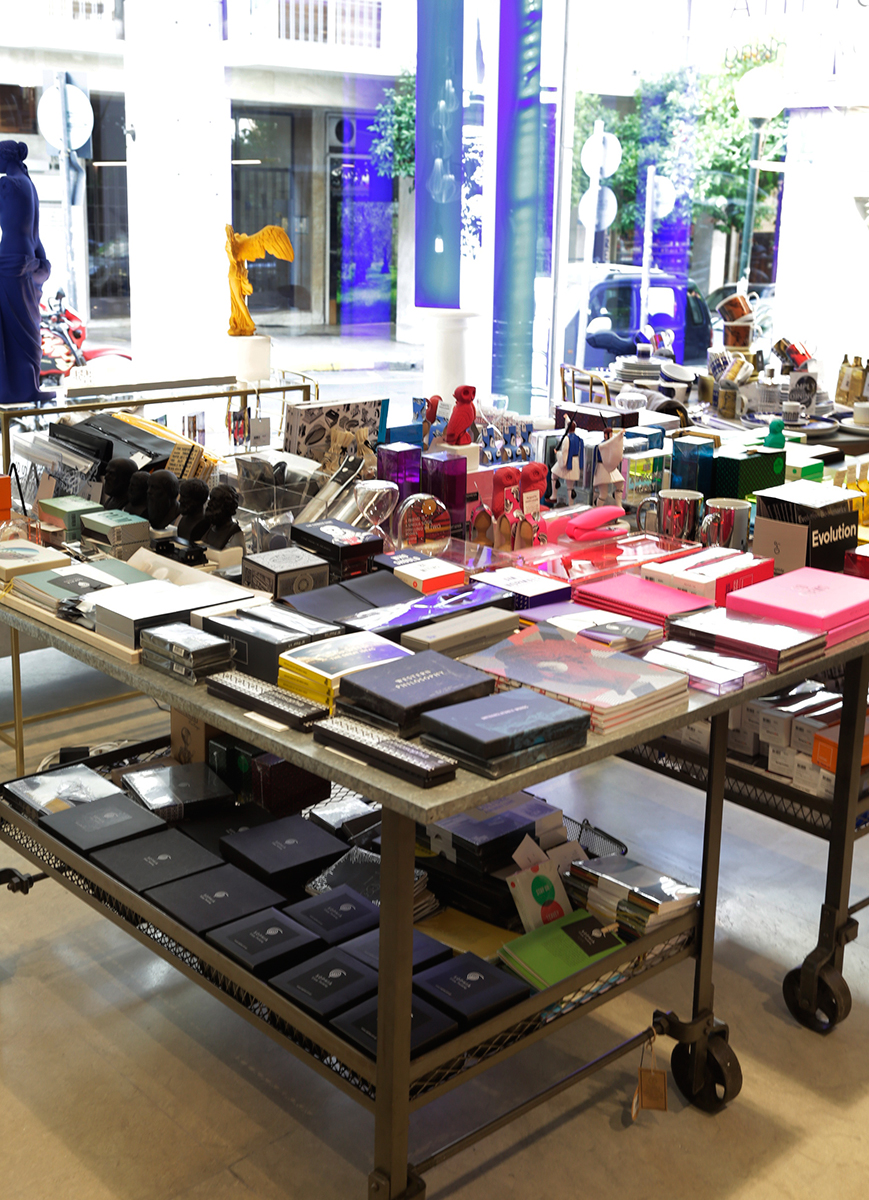 Its products are made in Greece and the majority of them are handmade. The creative team of SOPHIA is made up of dedicated people from different disciplines, such as craftsmen, artists and business people who share common goals, moral values, passion, admiration and great love for Greece and its history.

The company’s slogan is “Enjoy Thinking” as it has faith in the process of thinking and its power which can change the world around it. SOPHIA listened to the precious legacy of ancient Greece, the wise words of the philosophers and the enchanting statues, and chose those that inspired it and made it think and ponder. A cultural initiative that works to raise artists, craftsmen, entrepreneurs, designers and craftsmen, especially those affected by the crisis, and promotes within and, above all, outside the walls of Greek creativity and history, and in general the beautiful side of Greece. 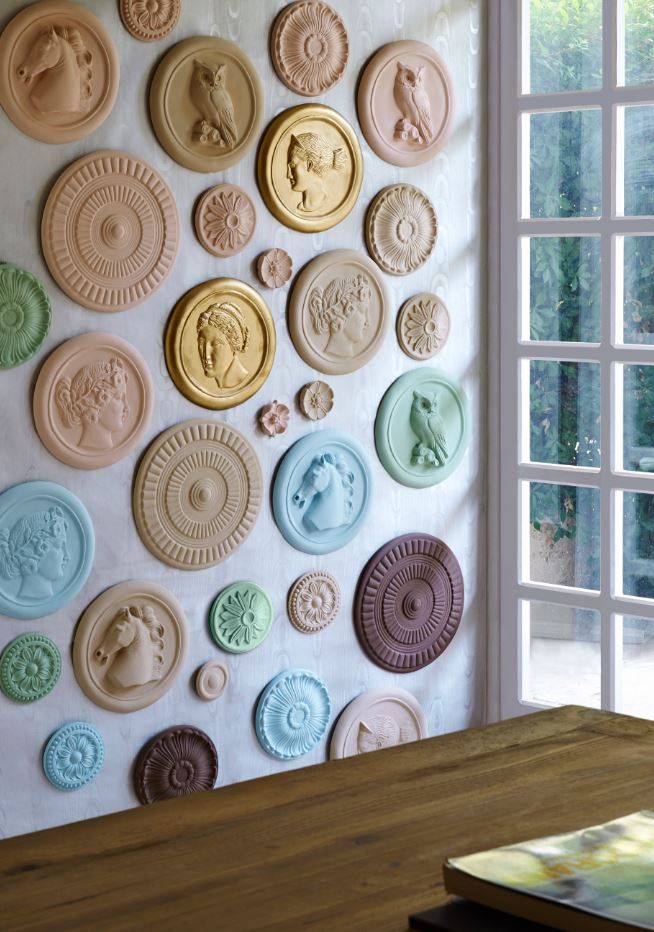 Twenty-two museums in the world, including the Louvre and the Picasso in Paris, the British Museum in London and Getty in Los Angeles, exhibit and sell the Greek objects of Sophia Enjoy Thinking in their stores, while they are displayed in 400 top department stores, such as Printemps, Galleries Lafayette in Paris, Neiman Marcus in New York, and in more than 40 countries, including Singapore, Iceland, Australia, Taiwan and China. One hundred and fifty international prestigious publications have welcomed extensive articles and SOPHIA articles in their countries, some of which are France’s Elle Décoration, AD España and Living Brazil.

SOPHIA Enjoy Thinking Live is a mix of live experiences and discoveries that are in direct dialogue with collections of unique objects. It is a place where art flirts with design, eternity meets modernity and the wealth of the past blends harmoniously with the spirit of the 21st century. It is not just another store and it’s more than just a simple concept store. It is a living space that welcomes everyone to negotiate, discover, think, dream, write, share, discuss, create and inspire. 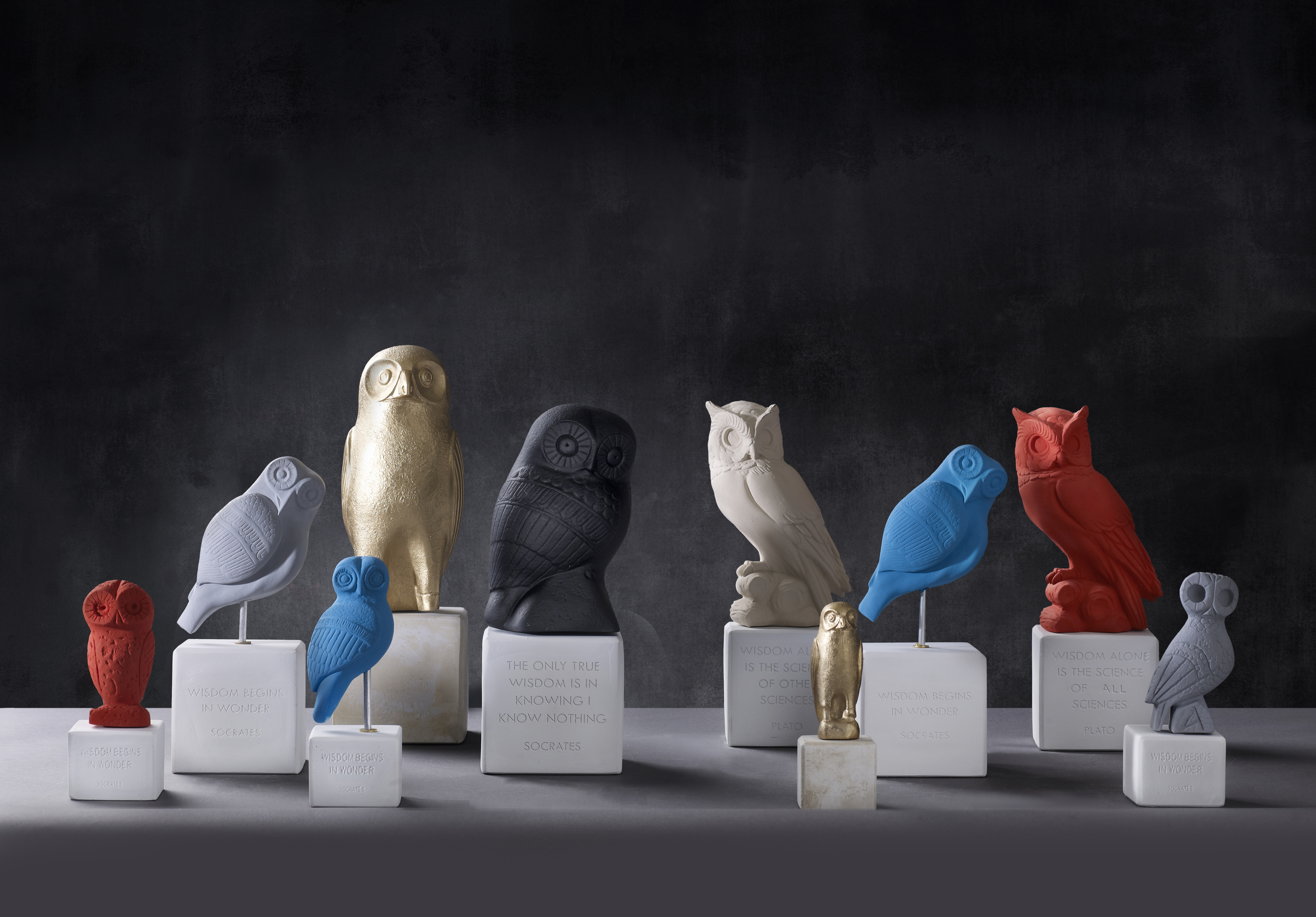 Its collections are linked to the broader concept of Philosophy and unfold across different zones, the art of thinking, the power of dialogue, the enthusiasm for creation, the world of the man and the woman and the supremacy of architecture.

At the same time, the “Dialogue Zone” at the loft store of SOPHIA, created the Thinking Club through which encourages those who love thinking and supporting design and creativity to visit it and become acquainted with new trends and ideas. To participate in events and discussions with artists, designers, entrepreneurs, creators and people who make their idea a reality. 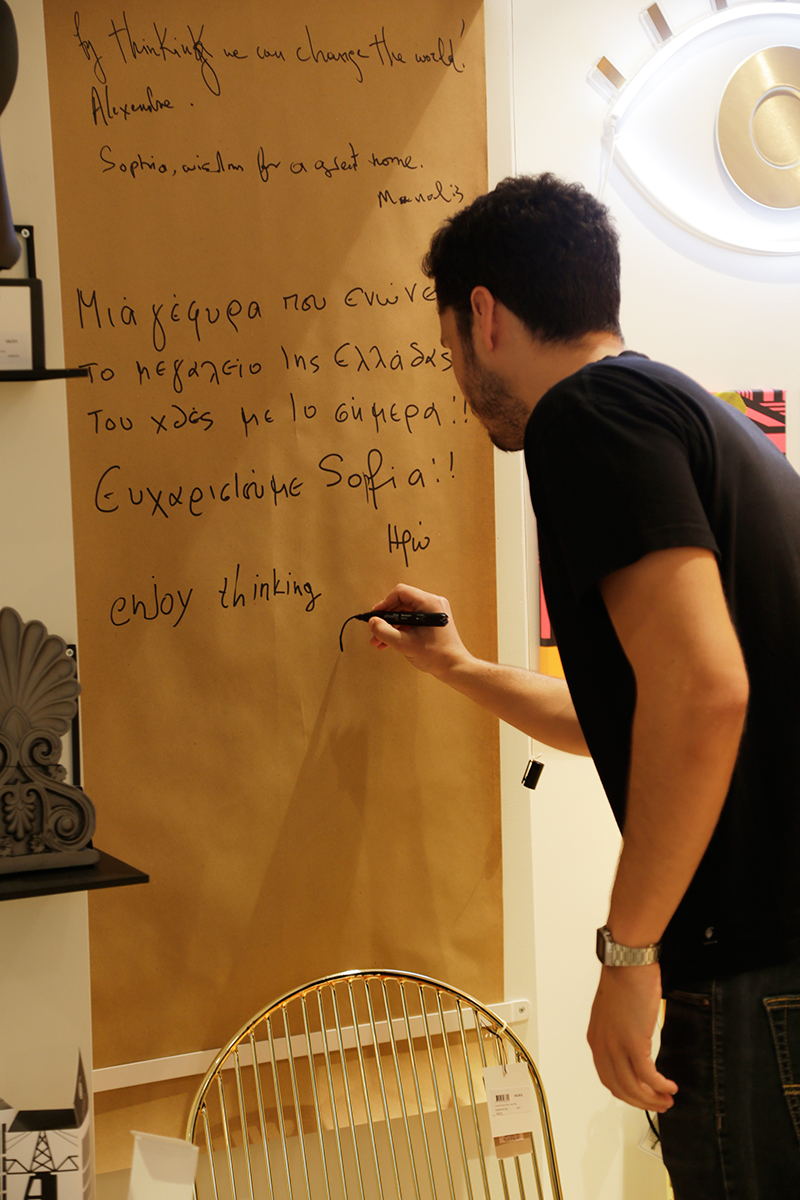 In addition, SOPHIA’s team considers that thinking is for everyone and for this reason a series of events take place at the store on a regular basis, where small groups are invited to exchange thoughts and experiences with others, creating and, ideally, inspiring a circle of potential friends, who will be full of ideas and celebrate the concept of thinking. The area is encircled by a series of books and home accessories that honor creativity, design, philosophy, ancient Greek heritage and thought.

Moreover, a wide range of products, made in Greece, are framed by a series of artists’ speeches presenting their creations, ideas and ambitions with the public in an effort to celebrate Greek innovation.

The whole concept is motivated by a strong passion to develop a new approach to retail, a new kind of retail therapy. The goal of SOPHIA is to create an interactive space where one can feel alive. Its intention is to strengthen the local economy, creativity and craftsmanship.

AN IDEA FROM THE COLLECTIONS

– Women are the architects of society

“It can be a male world, but it would be nothing without women. Inspired by classic elements, but with a modern look, the series has been groomed carefully to celebrate the female power, beauty, grace and elegance. A quality range of fashion and design items, from handmade handbags and silk scarves, to jewelry and statuettes of ancient Greek deities has been chosen to add a divine touch to the everyday life of the modern woman”. 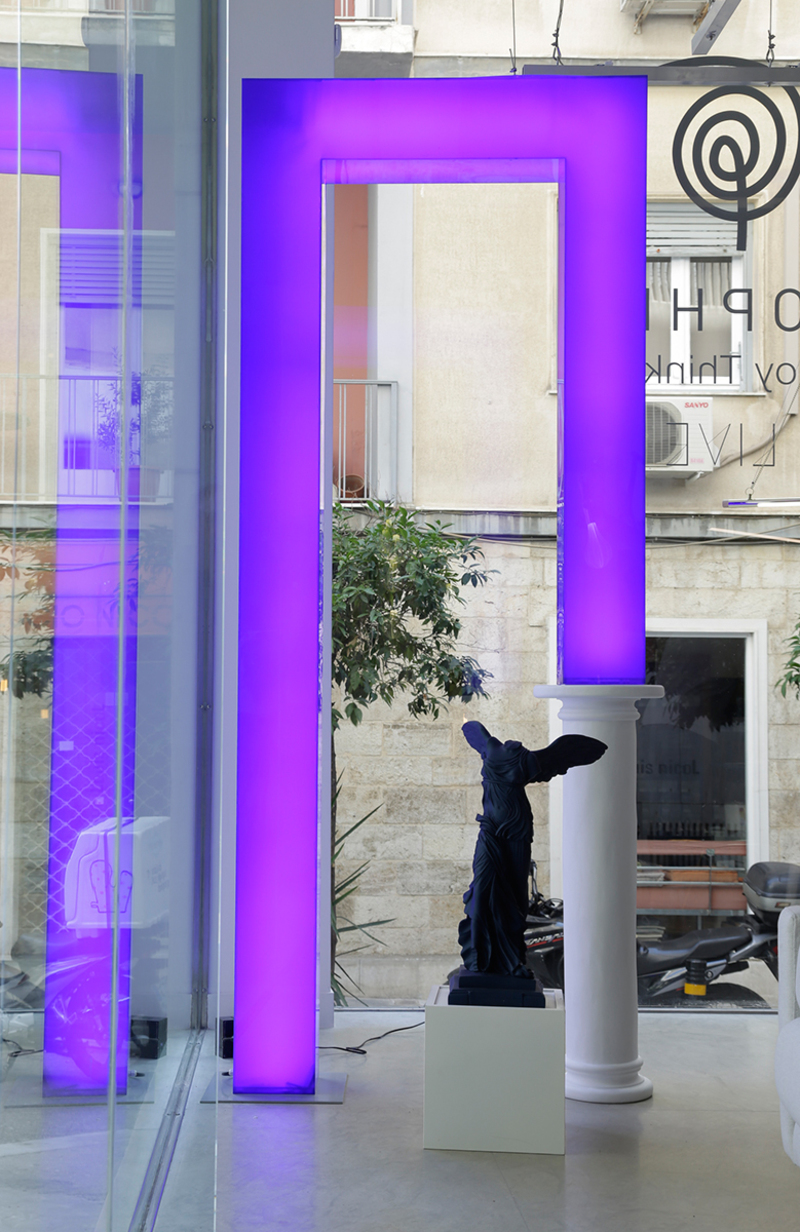 – The Black World of Man

“Man: a being exploring meaning – Plato
Black is poetic. This specialized series is a hymn to men’s values: courage, power, elegance and prestige. It recognizes that black color is synonymous with creativity, sophisticated style and energy for life. This series includes statues of heroic and divine male figures of the ancient world, stationery and other items that add a more sophisticated style to a man’s life”. 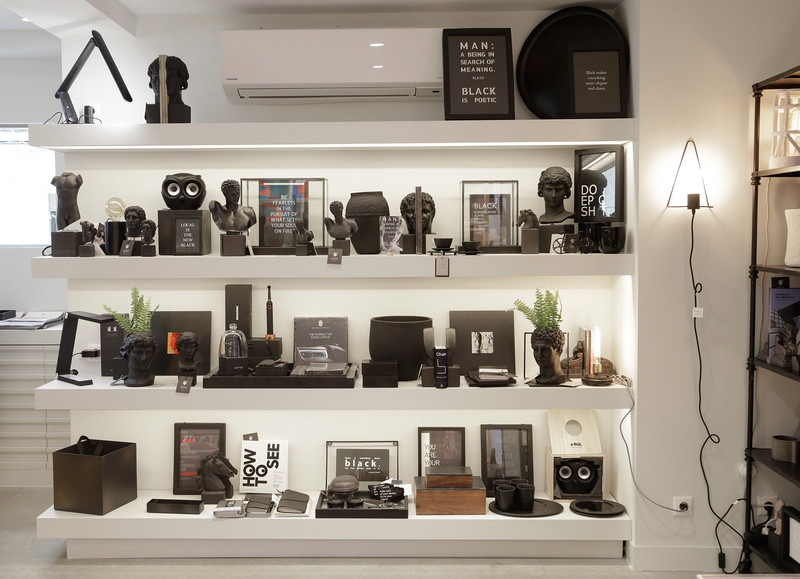 “Architecture is everywhere and its superiority lies in the slightly distorted horizontal lines of the Parthenon, carefully designed by Iktino and Kallikratis, in a ray of light striking a side of Louis Khan’s building, or in the elegant lines of Dimitris Pikionis, which bring to life the experience of ascending to the Acropolis. Architecture is life”. 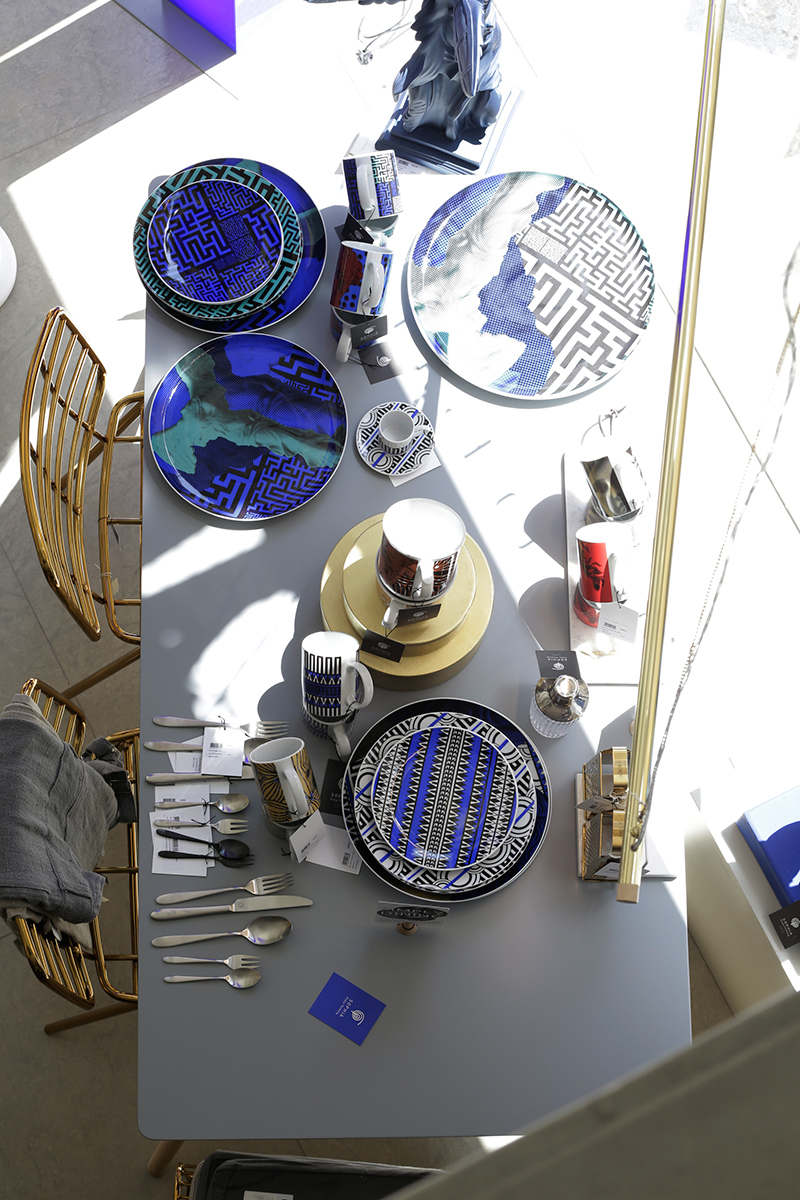