A team of scientists led by a Greek researcher at the Johns Hopkins University Applied Physics Laboratory (APL) in Laurel, Maryland, has partnered with researchers from the University of Maryland (UMD) and the Army Research Laboratory (ARL) to develop a new type of flexible lithium-ion battery that can operate under extreme conditions, including cutting, submersion and ballistic impact.

Lithium-ion batteries have become the energy storage method of choice for consumer electronics and military and aerospace systems alike. But potential safety hazards associated with the organic electrolytes that are used in Li-ion battery cells remain an ongoing concern.

In their paper, “Flexible Aqueous Li-ion Battery with High Energy and Power Densities,” which was published online last month in Advanced Materials, the scientists describe their work, which builds upon a novel, highly-concentrated water-based electrolyte called “water-in-salt” that can address the instability of traditional Li-ion batteries.

The team operated their flexible Li-ion battery in open air with minimal packaging, using only some electronically insulating, heat-resistant tape to keep it in place. In their demonstration, the battery powered a significant motor load without any safety concerns. To demonstrate the full safety potential, the team performed a series of tests while the battery was in operation, including cutting it, immersing it in sea water, and subjecting it to ballistic testing at an APL facility. None of these tests would be possible with traditional Li-ion batteries.

Impressively, not only did these abuse tests cause no catastrophic failure, but the battery maintained its performance and continued to power the load even when damaged and completely exposed to air and water.

The extraordinary safety of the water-in-salt electrolyte stems from the fact that the water is strongly bound to the high concentrations of salt, and that the electrolyte is slightly hydrophobic—meaning it repels water. The team is looking for opportunities to transition the technology to make it available to the military.

“We wanted to show the real implications of this technology in practical applications,” said Kostas Gerasopoulos, senior research scientist and principal investigator at APL. “Particularly for our military, with our [soldiers] exposed to extreme conditions and environments during their missions, the capability to maintain both safety and performance is unprecedented,”

The current generation of flexible batteries shows considerable potential, but they are still in the prototype phase.

“We want to increase the robustness of the [electrolyte] and the energy density of the batteries even further,” Gerasopoulos said. “This work though proves the concept that we can build safe Li-ion batteries that can survive mechanical abuse.” 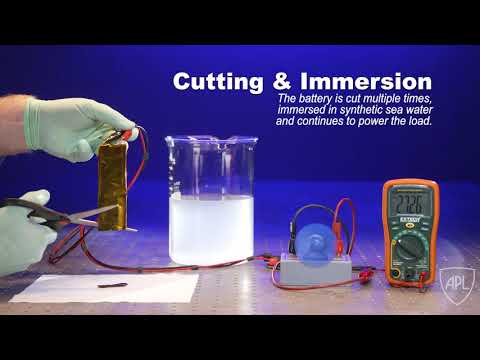