Galaxies are majestic, rotating wheels of stars? Not in the case of the spindle-like galaxies studied by Athanasia Tsatsi (Max Planck Institute for Astronomy) and her colleagues. Using the CALIFA survey, the astronomers found that these slender galaxies, which rotate along their longest axis, are much more common than previously thought. The new data allowed the astronomers to create a model for how these unusual galaxies probably formed, namely out of a special kind of merger of two spiral galaxies. The results have been published in the journal Astronomy & Astrophysics.

When most people think of galaxies, they think of majestic spiral galaxies like that of our home galaxy, the Milky Way: billions of stars, rotating in a flat disk similar to the way that a wheel rotates around its central axis. But there is another kind of galaxy, which used to be thought very rare: so-called prolate rotators, each shaped like a cigar, which rotates along its long axis, like a spindle.

Now, a group of astronomers led by Athanasia Tsatsi of the Max Planck Institute for Astronomy has completed a thorough study of these cosmic spindles. Using data from the CALIFA survey, a systematic study that examined the velocity structure of more than 600 galaxies, the astronomers discovered eight new prolate rotating galaxies, almost doubling the total known number of such galaxies (from 12 to 20). Cosmic spindles are considerably less rare than astronomers had thought!

Given the high quality of their data, the astronomers were able to propose a plausible explanation for how these cosmic spindles come into existence. In general, galaxies grow when they merge with other galaxies. Several mergers with smaller galaxies have made our own Milky Way the stately disk it is today. To make a cosmic spindle, two large disk galaxies need to collide at right angles. The mechanism shown here was proposed by Athanasia Tsatsi and her colleagues in order to explain the recent discoveries of galaxies of this kind with the CALIFA survey.

As the galaxies begin to interact via gravitational attraction, one of them forms a bar: an elongated structure near the center. That bar becomes the cigar-like shape of the merged galaxy, while the orbiting stars of the other galaxy imbue the merged galaxy with its overall sense of rotation. 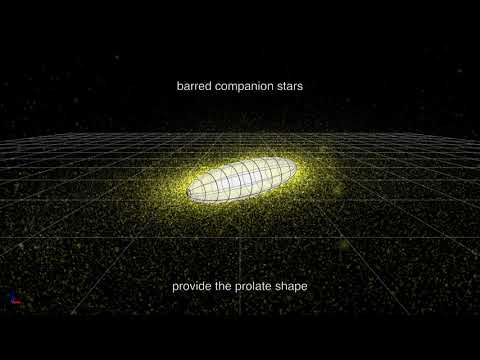