Fyodor Yurchikhin and Sergey Ryazanskiy ‘walked’ out of the ISS to launch five small satellites and undergo general maintenance of the station. One of the small satellites – called Tomsk-TPU 120 – is the first to have a fully 3D printed body. The two spacewalkers exited the Pirs Docking Compartment Station at 10:36 a.m. EDT. Among their accomplishments was manual deployment of five nanosatellites from a ladder outside the airlock.

The device was made in collaboration with students from Tomsk Polytechnic University, the aerospace corporation RSC Energia and with the Institute of Strength Physics and Materials Science of the Siberian Branch of Russian Academy of Sciences.

NASA said in a statement: “The satellites, each of which has a mass of about 11 pounds, have a variety of purposes… One of the satellites, with casings made using 3D printing technology, will test the effect of the low-Earth-orbit environment on the composition of 3D printed materials. Another satellite contains recorded greetings to the people of Earth in 11 languages.

“A third satellite commemorates the 60th anniversary of the Sputnik 1 launch and the 160th anniversary of the birth of Russian scientist Konstantin Tsiolkovsky.” In total, 5 devices were launched and samples were taken from outside the ISS plus new parts were added to the ISS to assist in future spacewalks. The mission took over 7 hours – at least an hour longer than expected.

The first cosmonaut of Greek descent 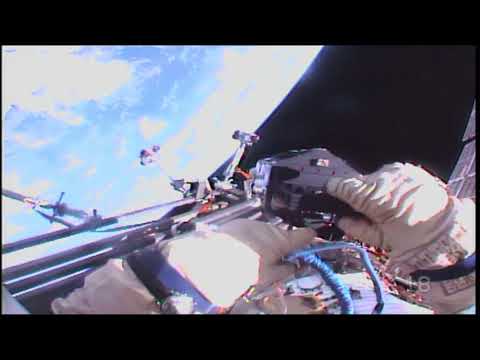