Maria Filopoulou is a painter and one of the most important representatives of contemporary representational art in Greece. Deep human-centered, she does not create enclosed worlds but landscapes to let her figures grow.

She was born in 1964 in Athens. She studied painting in Paris at the Ecole nationale supérieure des beaux-arts under Leonardo Cremonini, during the period 1984-1988. Continued with postgraduate studies at the same school, with a schol­ar­ship of the French Government, during the period 1988-1989 (lithography under Αbraham Hadad).

Her works are to be found in the National Gallery, in the Greek Parliament, and in private museums and collections in Greece and abroad.

The artist herself says about her painting: “I have obsession with water and everything that has to do with it in my personal life and my painting in recent years. The open horizons with the strong light, the free movement of the swimmers under the water and above that in its absolute protection, the water reflections on the bare bodies, the bubbles, the sand of the bottom of the sea, the swimmers’ movement without gravity between ancient columns, ancient scraps, the flow of water in the waterfall, create a dream world. I paint experienced personal paradises, happiness, relaxation, bonding with nature, eroticism that bathers feel in the water. I think that all existence is a delicate balance of the awareness that happy moments are valuable and we must recognize them and appreciate them. So I paint the border of happiness, isolated from before and after. There is no time, just place. I focus on the endless clean space that is the calm personal space. In the “lost paradise” the civilized person can find fullness and serenity. In nature, especially in the water, I meet happiness, tranquility, freedom, cleansing. And this feeling I want to convey to my works as an antidote in a time of cultural and economic crisis.”

The title of the new solo exhibition by Maria Filopoulou, will be inaugurated at the Kapopoulos Fine Arts Gallery in Patmos on August 11, 2017, is “To The Water”.

“I try to do my best. I’m mainly creating big paintings because it’s like going into them when I paint. I feel like I’m making a scene in which I live. And I want to put the viewer in it to have my own experience”, Maria Filopoulou points out.

The exhibition presents representative paintings from the distinctive creative universe of Maria Filopoulou, who has been identified since the mid-1990s with seascapes and mainly with the diving of the human body to them; the coexistence of body and sea, the diving that often refers to a redeeming process.

Visitors to the Kapopoulos Fine Arts gallery in Patmos will see underwater swimmers between ancient scraps and the depth of the sea, seas shining under the sun, bathers at waterfalls on beaches, on warm sand. 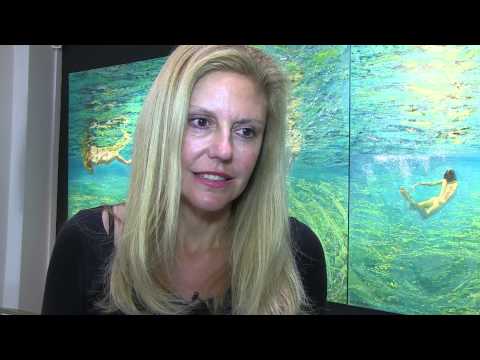