Significant finds with the completion of the restoration

The ancient city of Aptera, one of the most important cities of Ancient Crete will be presented in an event that will be held on Wednesday 24 May in the American School of Classical Studies at Athens.

The event “Aptera, Research and promotion of an emblematic archaeological area for Western Crete” is organised by Chanian Antiquities Ephorate and the region of Crete in cooperation with the Cultural Society of Crete.

Aptera was one of the most important city-states on Crete. Its strategic position on the Paleokastro Hill situated southeast of the natural port of Souda in Chania combined with the fertile valleys that surrounded it, supported its growth into a powerful trade and political centre. Aptera existed until the 7th century BC when it was destroyed by a strong earthquake.

The long years of excavations and the restoration works implemented within the context of European and national programmes revealed the city’s impressive fortification as well as the ancient theatre. Nowadays, the site Aptera attracts more and more visitors who are impressed by its monuments and the view to Cretan mountains, the Souda Gulf and to Apokoronas hinterland.

The theatre of Aptera is situated close to the south-eastern entrance of the ancient city, in a naural cavity, facing the South and overlooking the White Mountains. The theatre is built with fossiliferous limestone and today three main building phases can be distinguished. The earliest phase determined the Hellenistic period (3rd century BC). The theatre underwent a full refitting in the Roman period in order to adjust to the new viewing needs.

Aptera was also called Apteron and lies about a kilometre inland from the southern shore of Souda Bay, about 13 km east of Chania in the municipality of Akrotiri. It is mentioned in Linear B tablets from the 14th-13th centuries BC. Thanks to its highly fortunate geographical situation, the city-state was powerful from Minoan through Hellenistic times, when it gradually declined. In Greek mythology, here was placed the scene of the legend of the contest between the Sirens and the Muses, when after the victory of the latter, the Sirens lost the feathers of their wings from their shoulders, and having thus become white, cast themselves into the sea, whence the name of the city Aptera (literally meaning “without wings”), and of the neighbouring islands Leucae (meaning “white”). It was at one time in alliance with Cnossus, but was afterwards compelled by the Polyrrhenians to side with them against that city. The port of Aptera according to Strabo was Cisamos.In the third century BCE Aptera was at war with Kydonia, a prominent ancient city on northwestern Crete. In much of the Greek Archaic Period, Aptera was under the control of Kydonia. By the 12th century, a monastery of St. John Theologos had been built on the site; it continued in operation until 1964. The site is now maintained by the Greek Ministry of Culture, Department of Antiquities.The hilltop, about 150 metres above the sea, commands views of Souda Bay and the Akrotiri Peninsula to the north, the Lefka Ori (White Mountains) to the south, and Kalives and the Turkish Itzendin Castle to the east; the city of Chania is not quite visible to the west. There are several structures within the square monastery enclosure, including a chapel and a two-story block of monks’ cells. The surrounding site is notable for a two-part temple from the 5th century BC, a large three-vaulted Roman cistern, Roman baths, and parts of several Doric temples. An ancient theater and a Roman peristyle villa have also been discovered on the site. 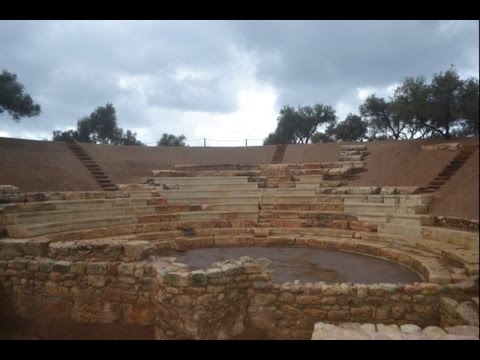